We took the TGV from Paris to Lyon, along with about 50 others, split into two groups. Our group's minder, Rose, was efficient and had a great sense of humor. This time the bus was there to collect us and take us to the S.S. Catherine for the third leg of our trip, called "Burgundy and Provence".

The Catherine is the largest of the three ships this trip, and the largest river ship we'd been on yet. Our suite was 50 square feet larger than the one on the Joie de Vivre, which was in turn larger than the Bon Voyage. It had some nice features, such as a "conservatory" niche with a window that lowered and sliding glass doors to separate it from the main part of the cabin. The bathroom was larger, too, but bizarrely had no towel bars other than the warming rack (that the other two ships had also had.) The bed was a real King, noticeably wider, and faced the other window. But there was no desk. 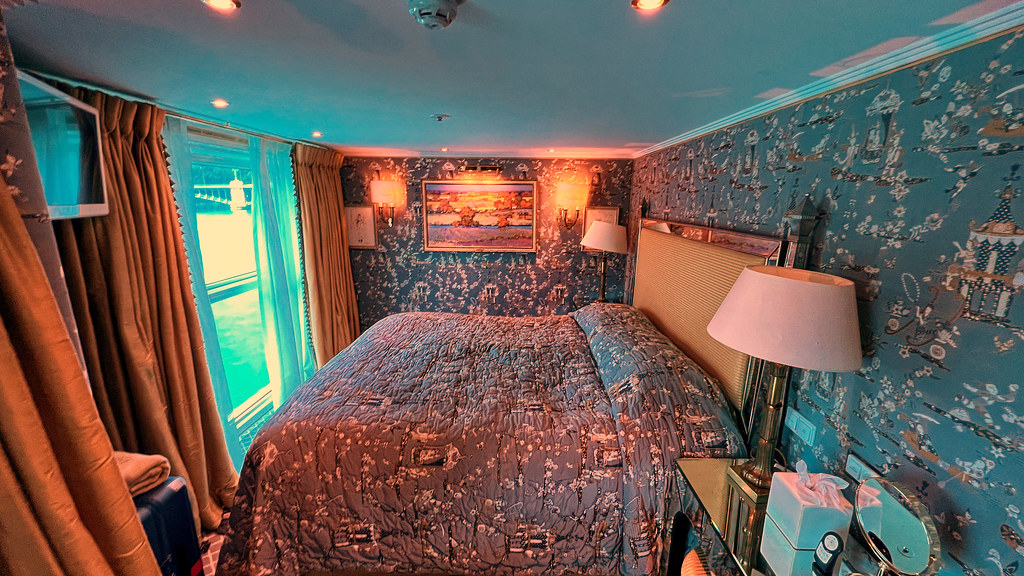 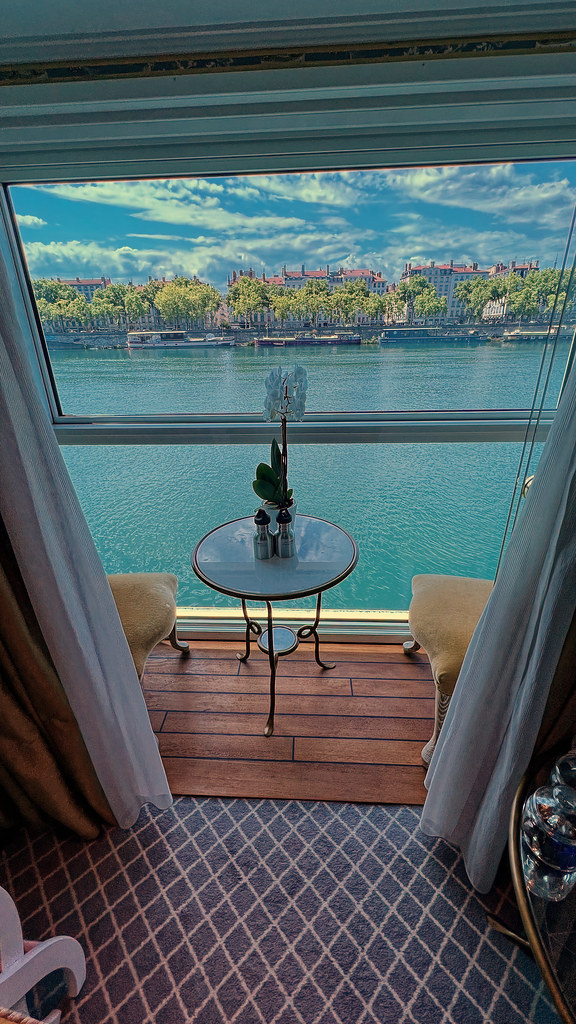 A large air plenum occupied most of the space a desk could go, with a sofa in front of it. This wall was where the majority of power outlets were, including the only two USB ports. (The other two ships had USB ports on either side of the bed and in the desk area,) Speaking of the bed, only one side had power outlets at a usable level - there was a 240V outlet at floor level, behind a nightstand, on the other side. As on the other ships, the bathroom had two illuminated "makeup mirrors" on a swivel hinge, but the light on one did not work. There were many fewer drawers than on the other ships. I wondered if this was an older ship that had been remodeled, as there were odd things such as light switches that didn't work and whose function had been moved to another switch. 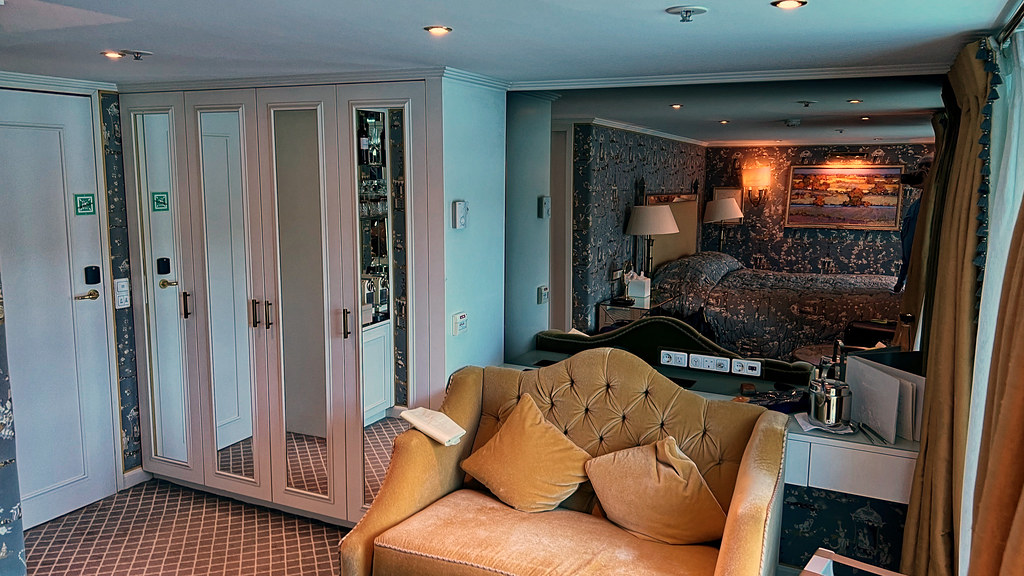 Another annoyance about the Catherine was that, unlike the Bon Voyage and Joie de Vivre, the lounge and restaurant areas have all hard surfaces (the others had padding in the ceilings and on the walls), and it is exceptionally noisy. Exacerbating this was that there were some 135 passengers on board (about 85% capacity), and as people strained to hear due to the reverberation, they talked louder, making the problem worse.

A bright spot was that Ivan, our butler from the Bon Voyage, served that role again on the Catherine. He also worked in the restaurant, but was very helpful to us. The ship sailed immediately up the Saône to Macon, but we would return to Lyon in two days. 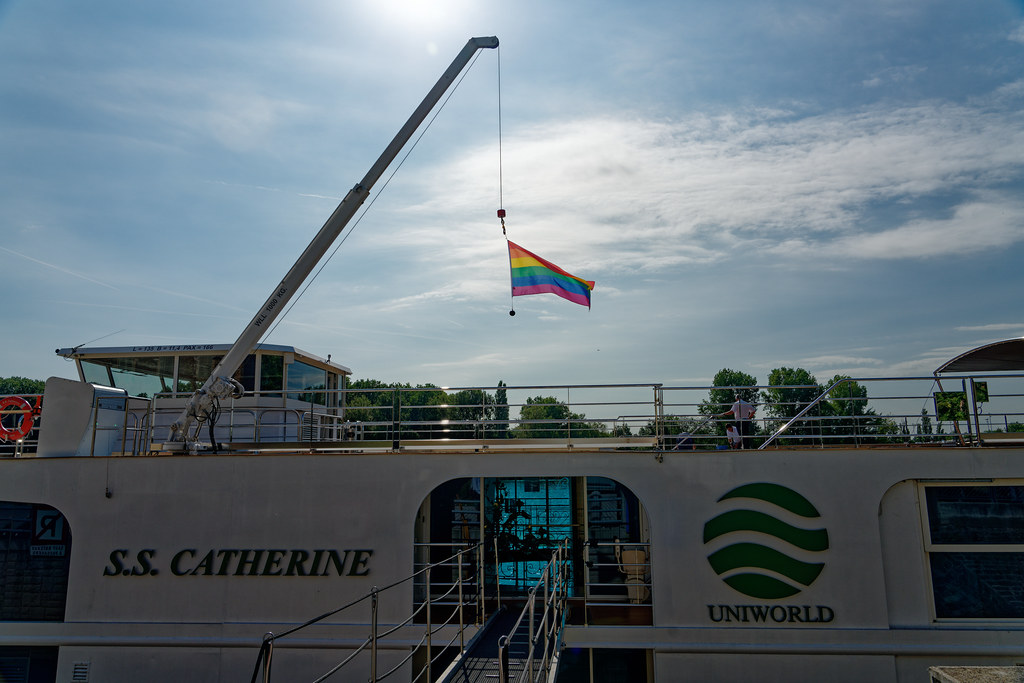 The ship was docked in Macon, but the included excursions were a bus ride away in Beaune. Since the four of us had done this route (more or less) ten years earlier, we passed on Beaune and instead joined a walking tour of Macon, which turned out to be a delightful town with a lot of charm and interesting history. 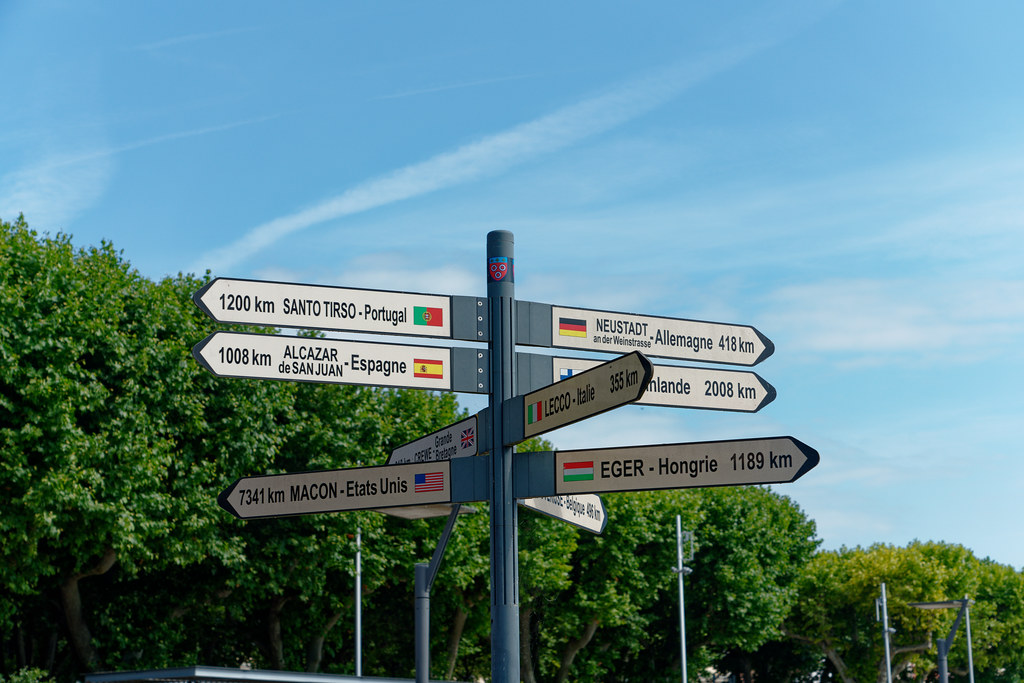 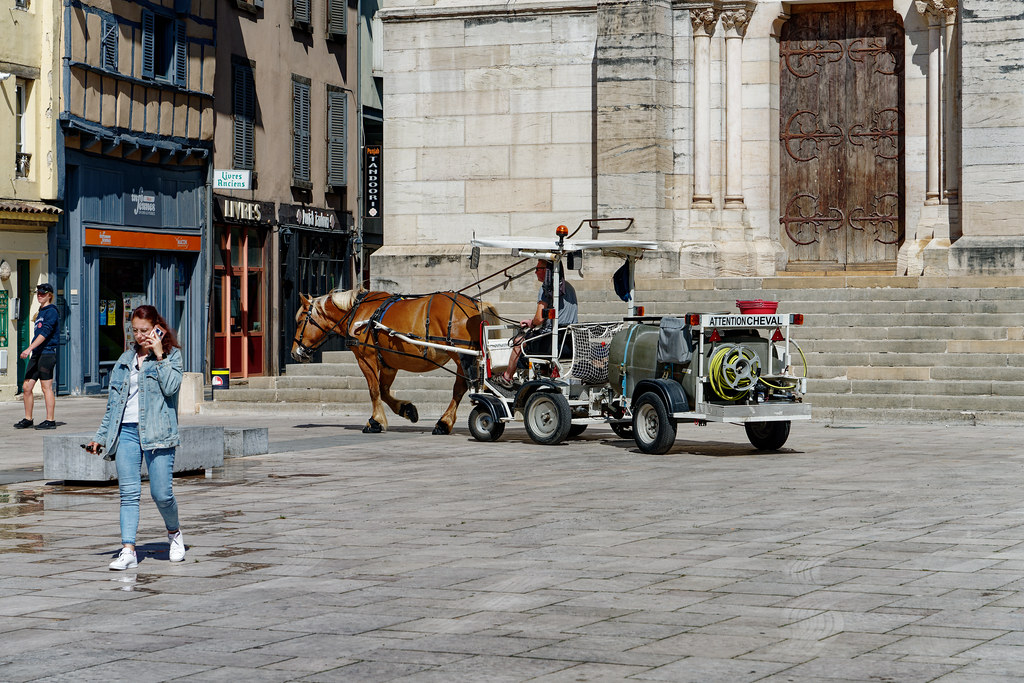 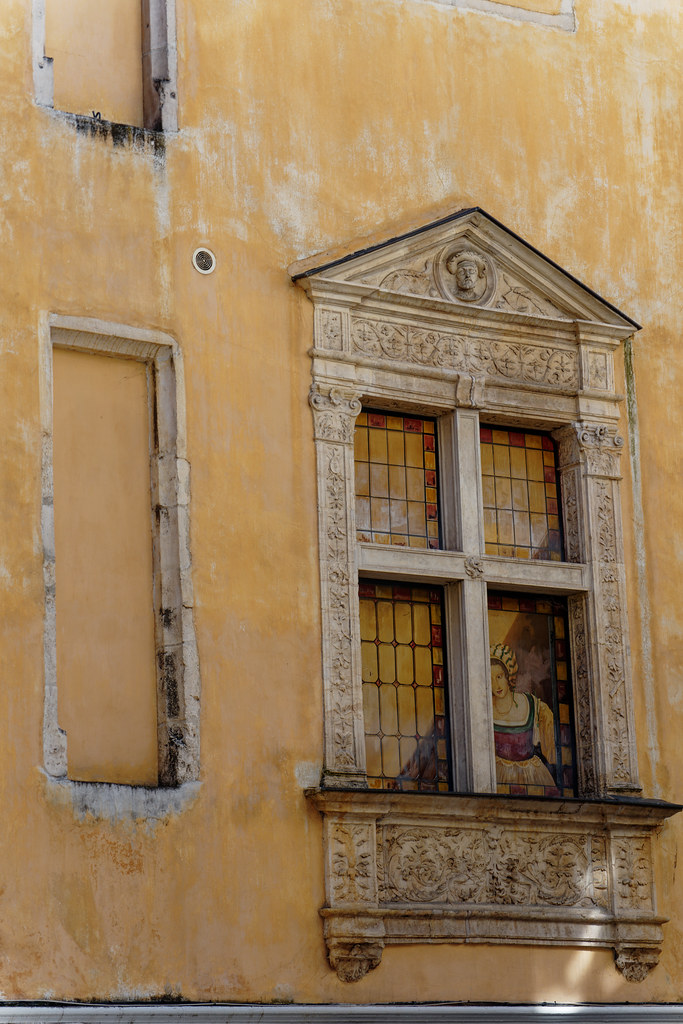 Macon is especially proud of poet Alphonse de Lamartine, with his name attached to dozens of parks, businesses and other things, a statue, a poem of his spelled out in brass along a granite walk, and a giant mural of his image, along with that of several of his mistresses, on the side of a building. 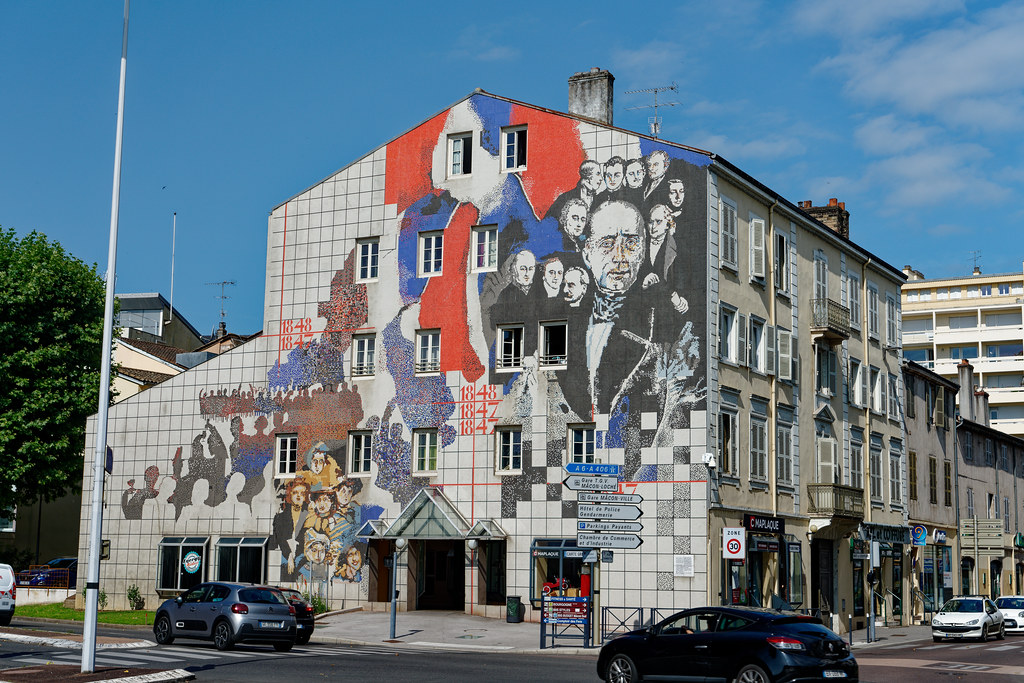 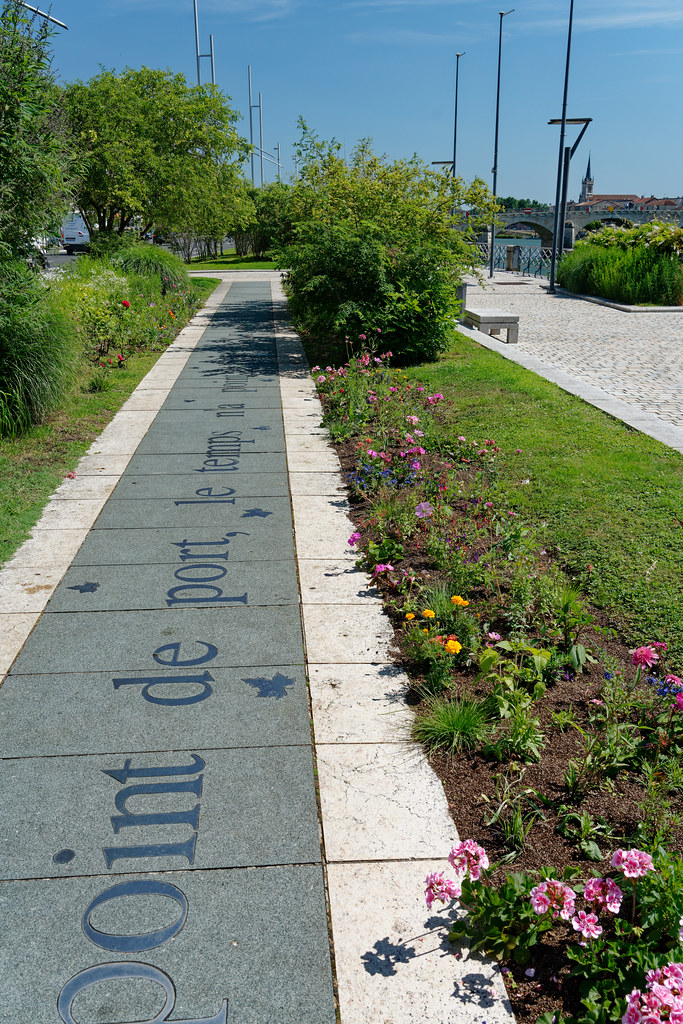 Like most of this part of France, it was part of the Roman Empire and pieces of Roman construction persist. There was also an interesting building that is all-wood (its name is, unsurprisingly, "The Wooden Building"), that served as a tavern. There are said to be only three like it in all of France. In the afternoon the ship turned around and sailed back to Lyon. 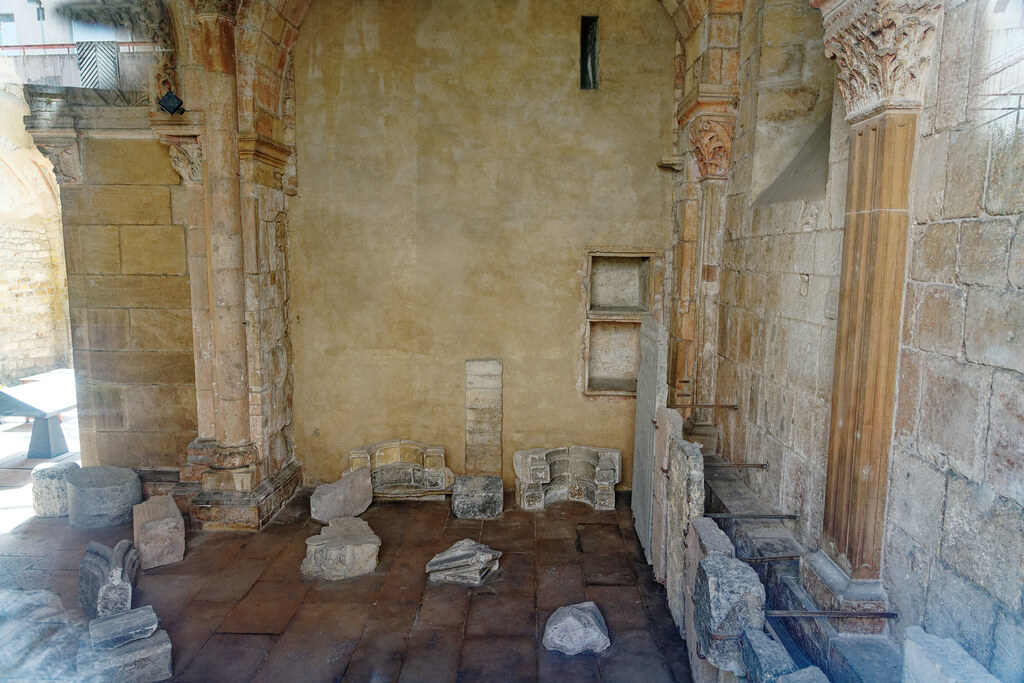 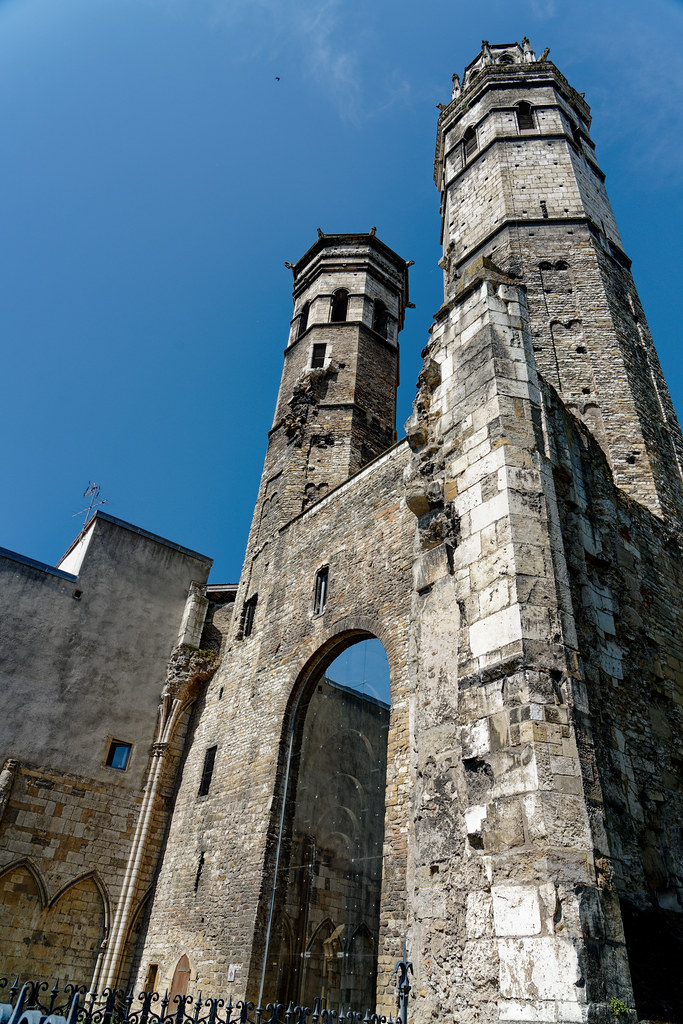 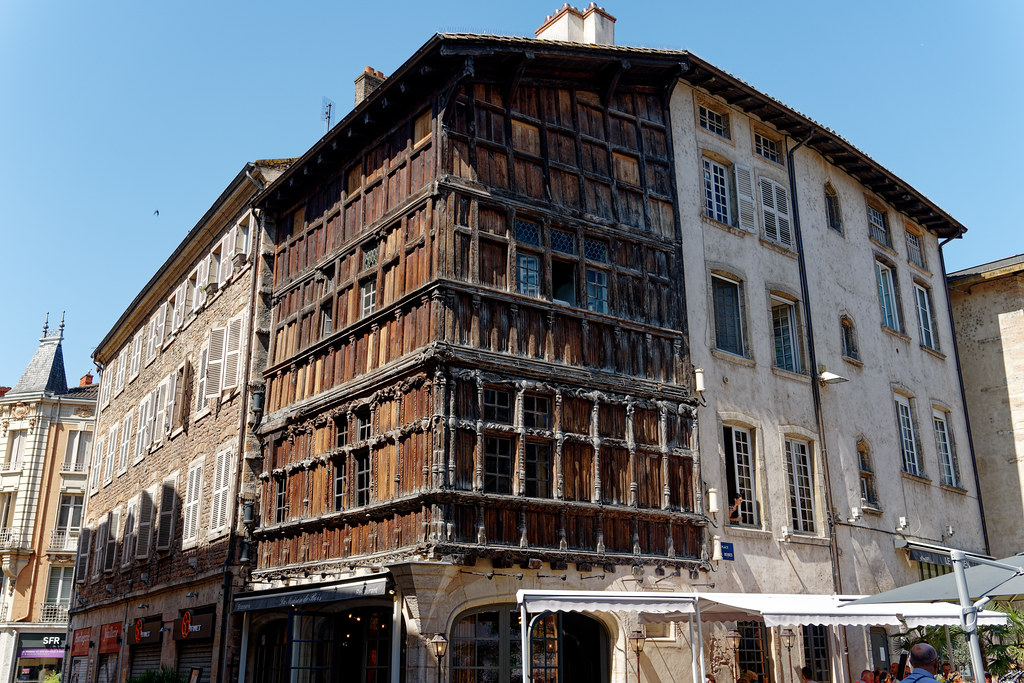 Leslie and I opted to take the walking tour of Lyon, which was a lot of fun, though very long. We started by taking the tram and then subway, similar to what we had done on a "Do as the Locals Do" excursion in Budapest. The tickets Aurolie gave us were good for an hour, and when we exited the subway she told us to leave our unexpired tickets on the turnstile for use by others - a Lyon tradition. We saw a couple of people pick them up and use them. 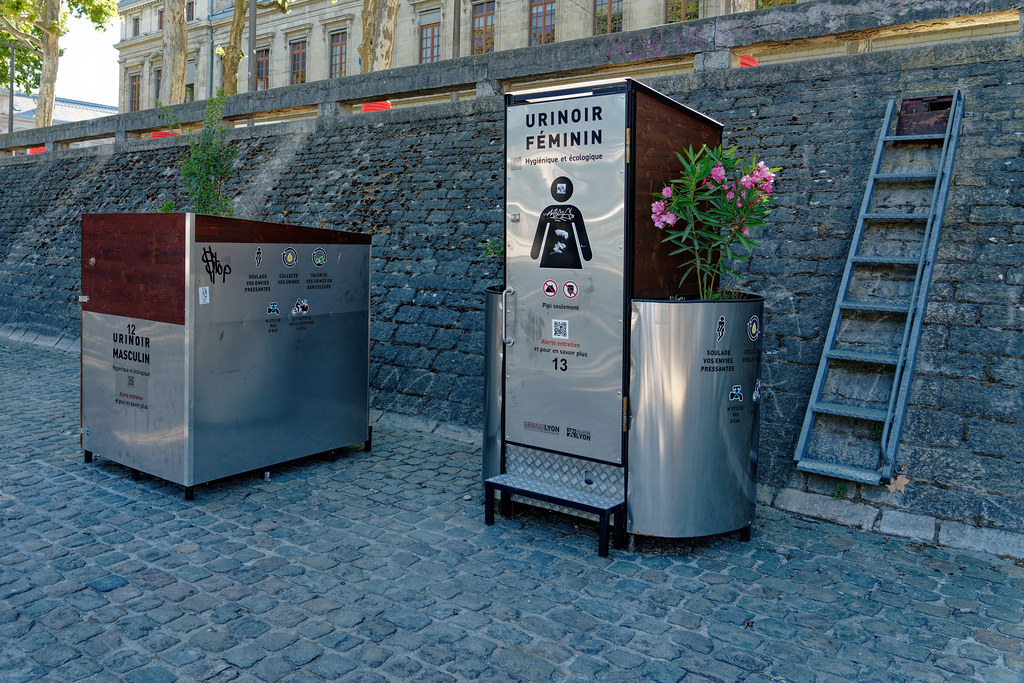 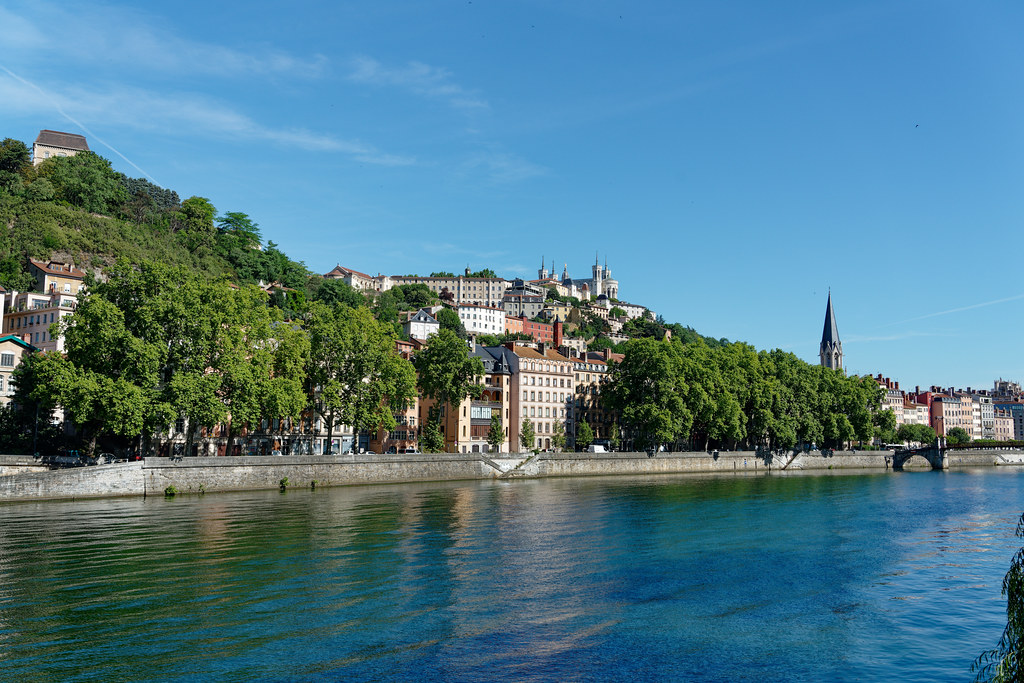 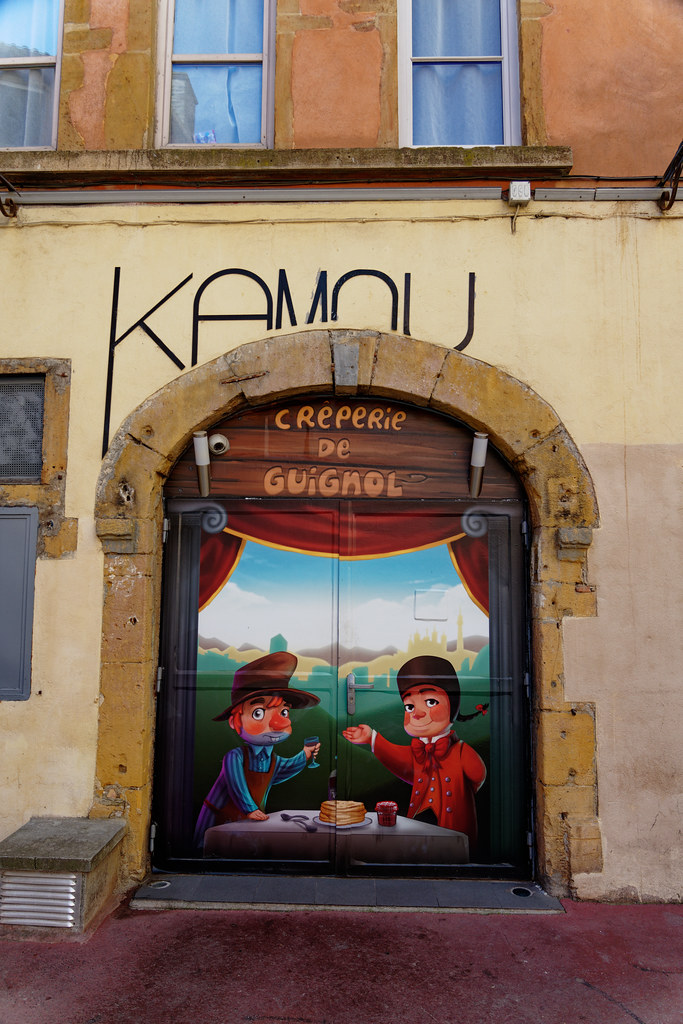 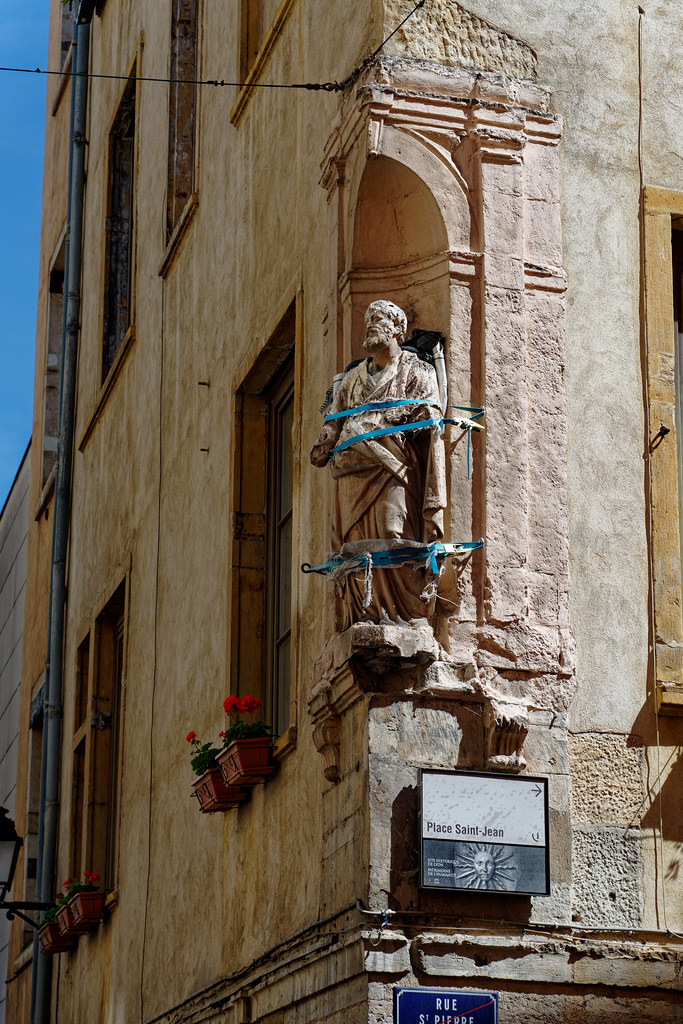 Lyon is at the confluence of the Saône and Rhône rivers, and we crossed bridges to visit the peninsula between them, as well as the "old town". There is a small replica of part of the EIffel Tower on a hill, that you can see bits of from various parts of the city. In the old, 15th century part, there are "passages" between streets with courtyards inside. Some of these are owned by the city and passage is open to the public during daytime hours, so we went through some of these. 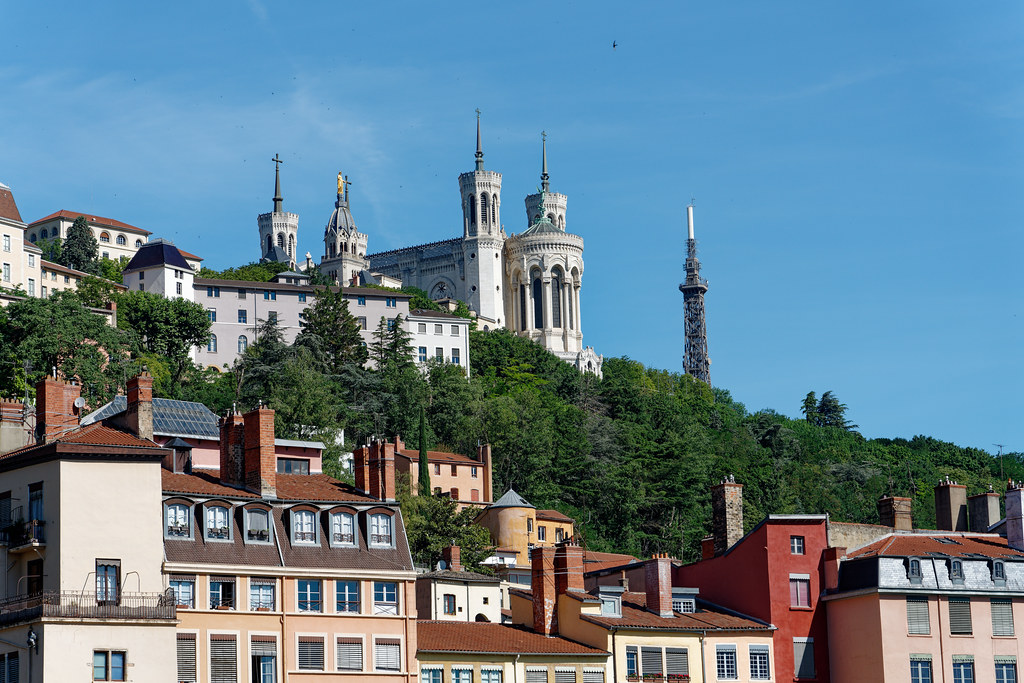 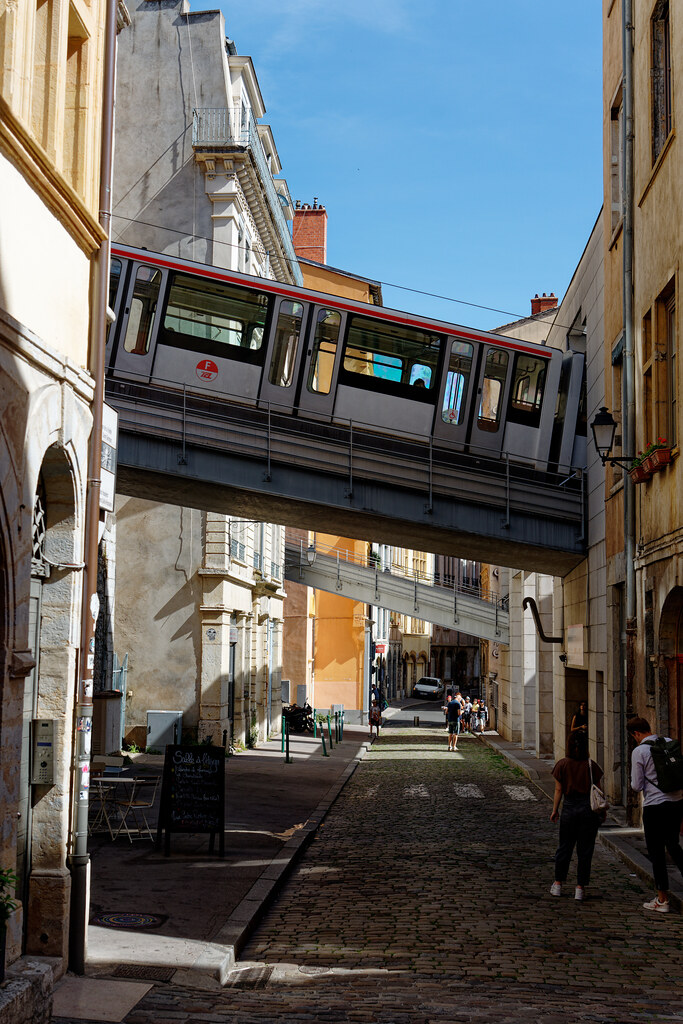 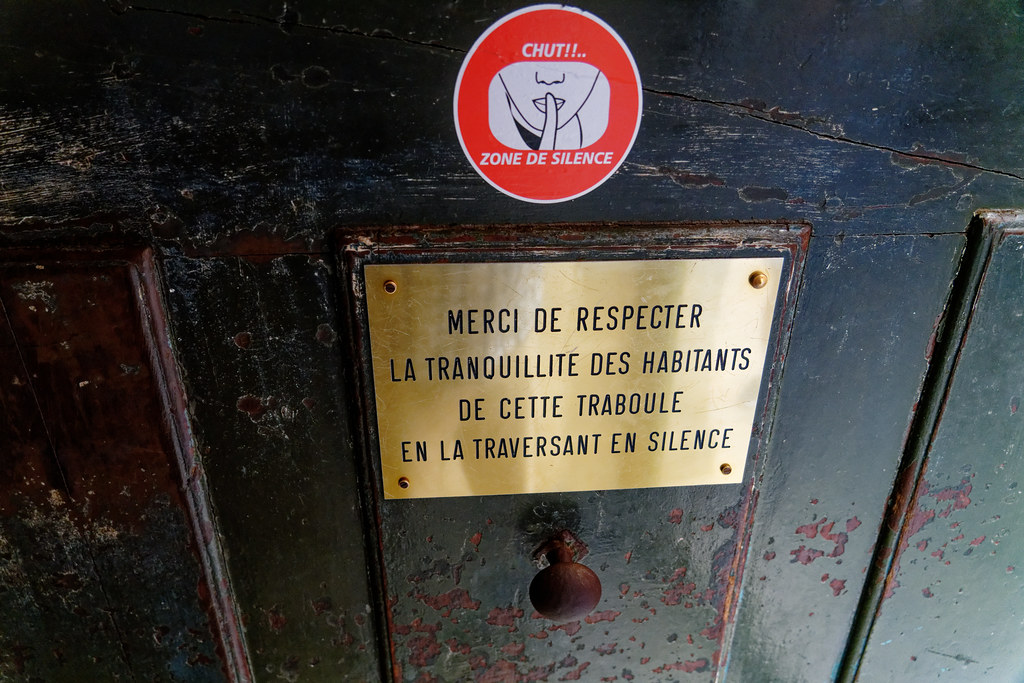 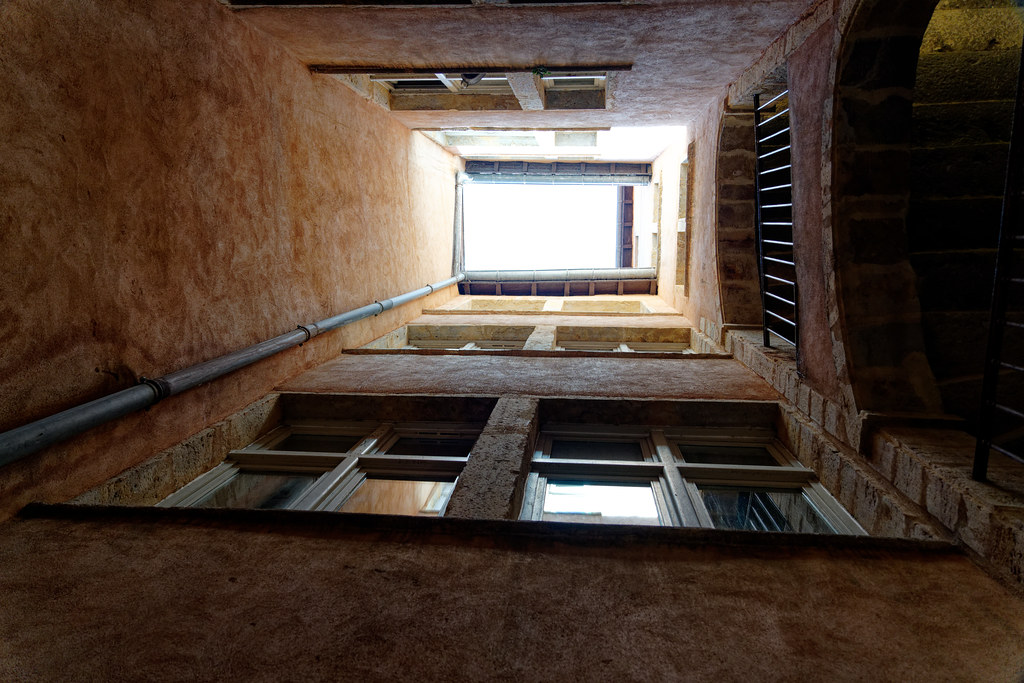 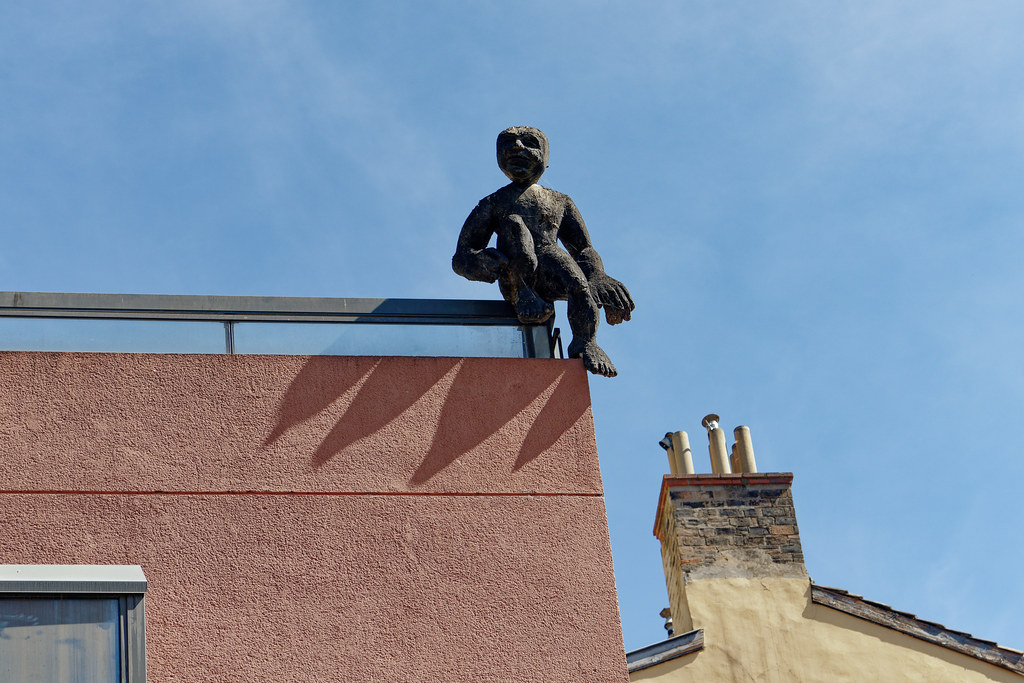 We visited a silk weaving workshop that takes commissions from places such as Versailles Palace for restoration and recreation of silk tapestries and upholstery. Leslie says we visited the same one in 2012, but I don't remember it. The two wooden Jacquard looms use his invention of punch cards for lifting the appropriate shuttles. There are only a few remaining silk weavers in the city, and a given loom typically produces only an inch of fabric per day. I bought a nice tie, and Leslie a scarf, from the shop. (These were obviously not made in that workshop, but were local.) 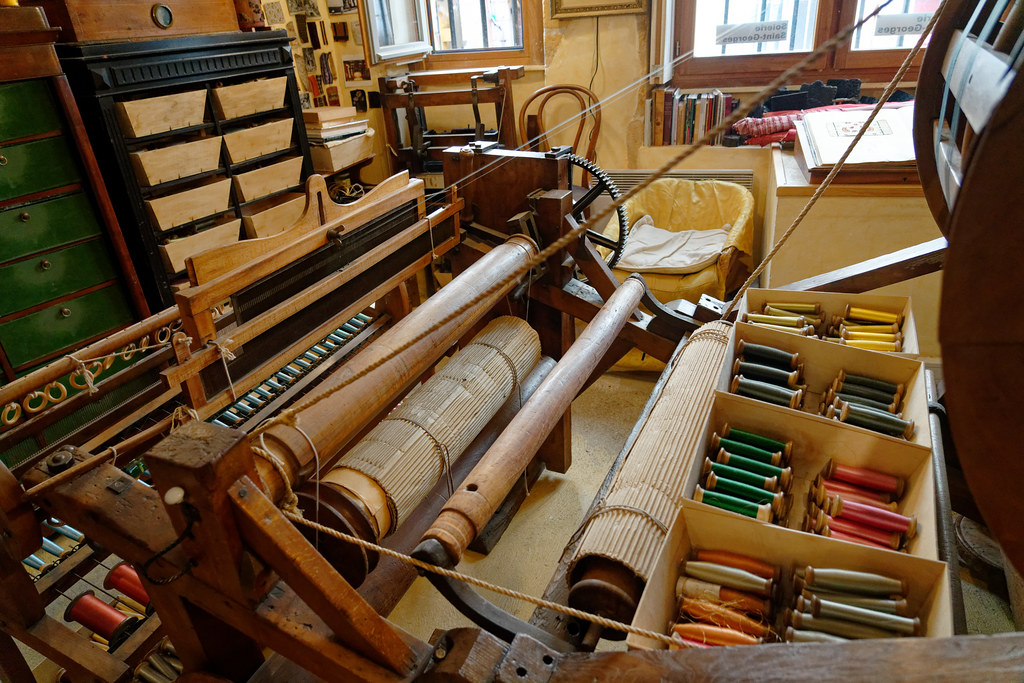 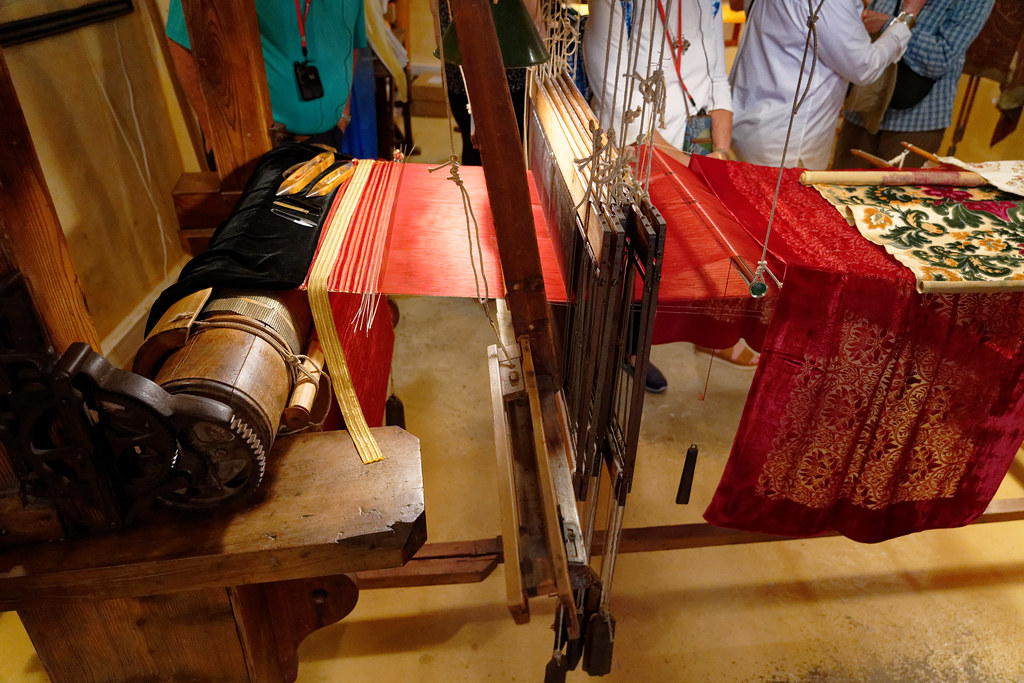 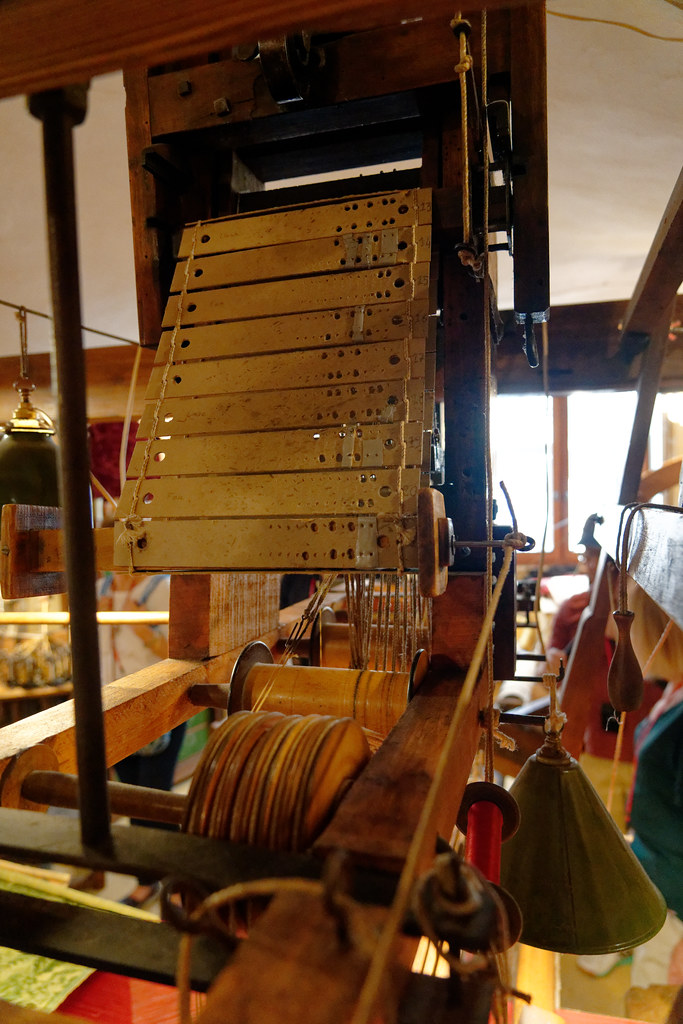 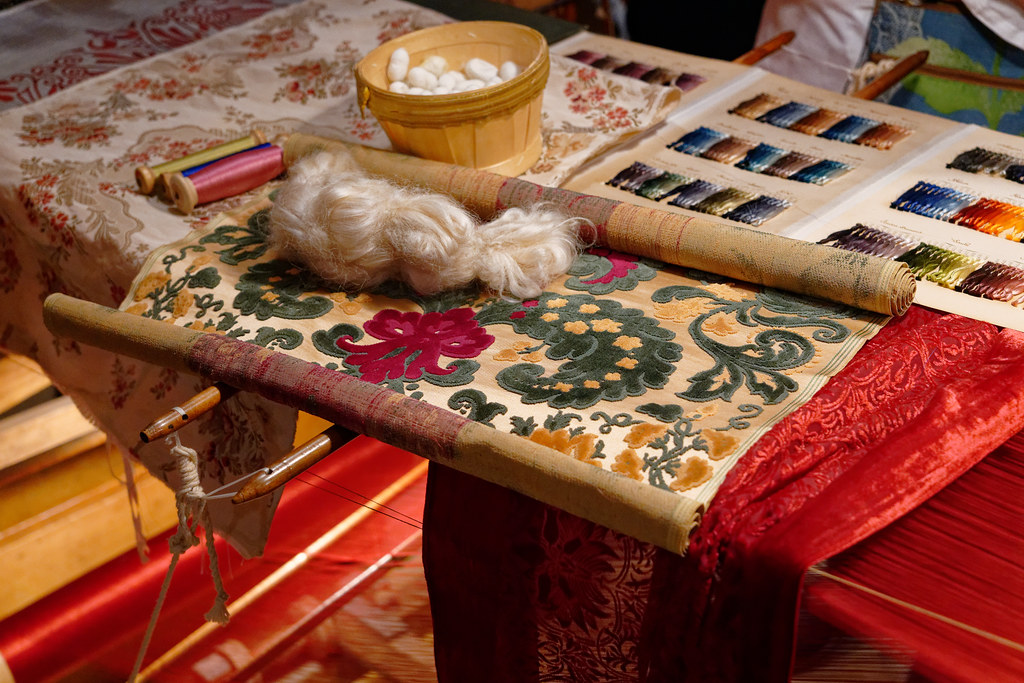 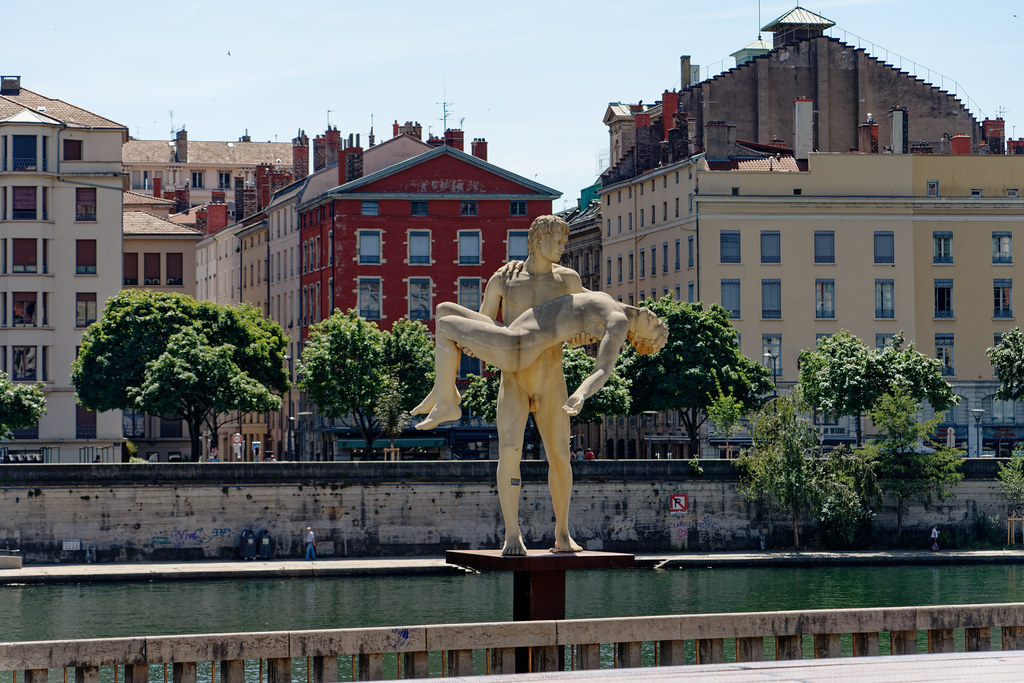 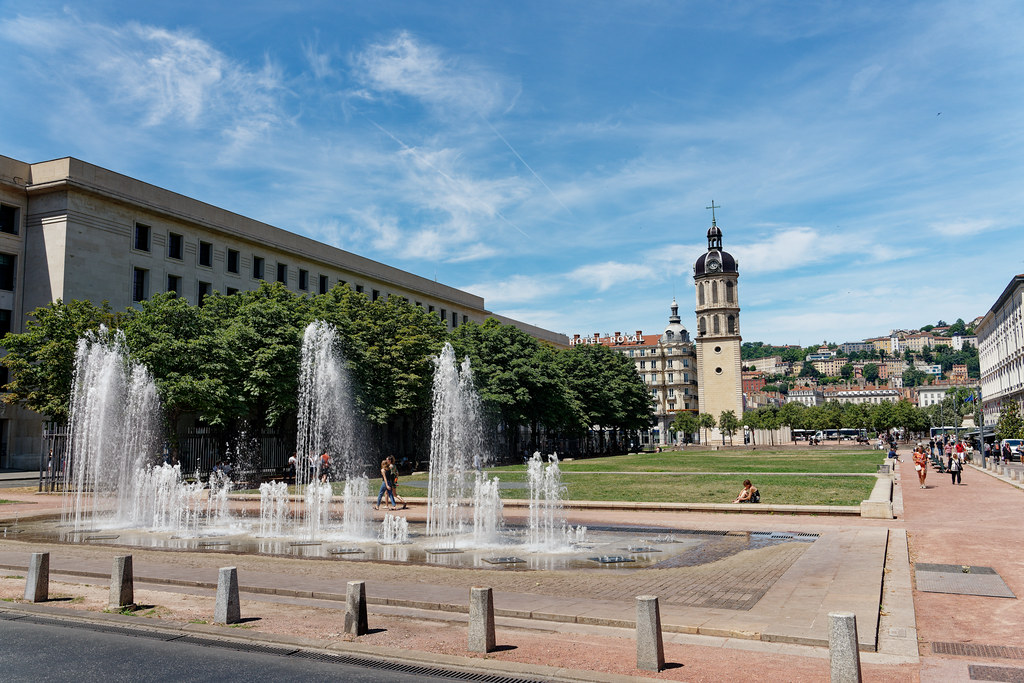 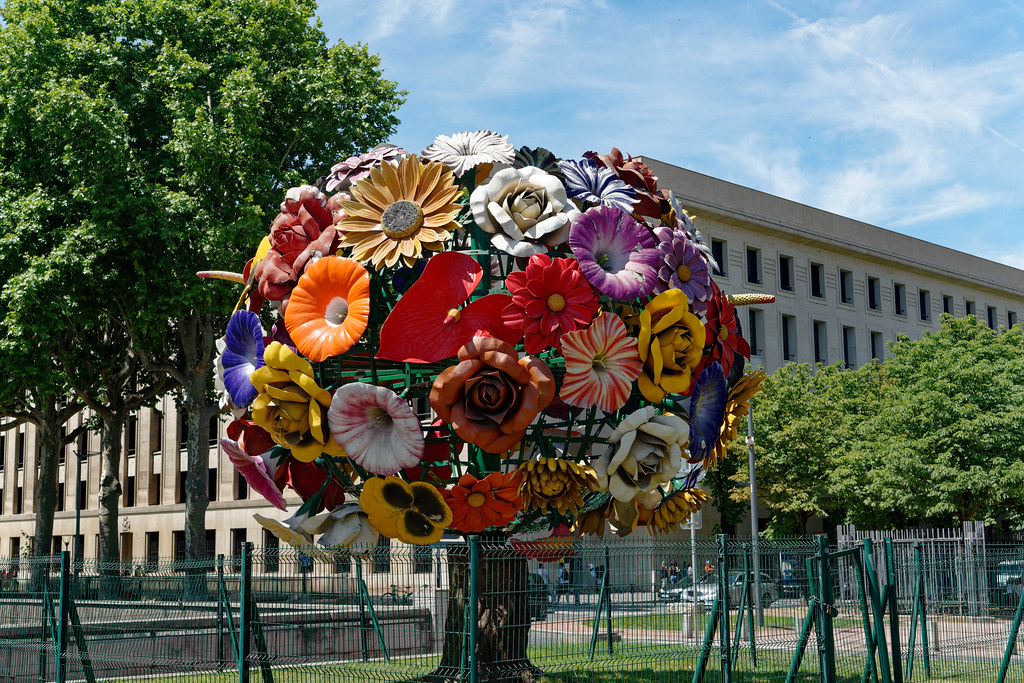