The schedule called for us to have an organ recital in Tain-L'Hermitage, but the last lock we needed to traverse was broken for a while, and that delayed us by two hours. The walking tour was still on, but not the recital. Again, we saw these two towns in 2012, but I have no memory of it so we did the walking tour again. 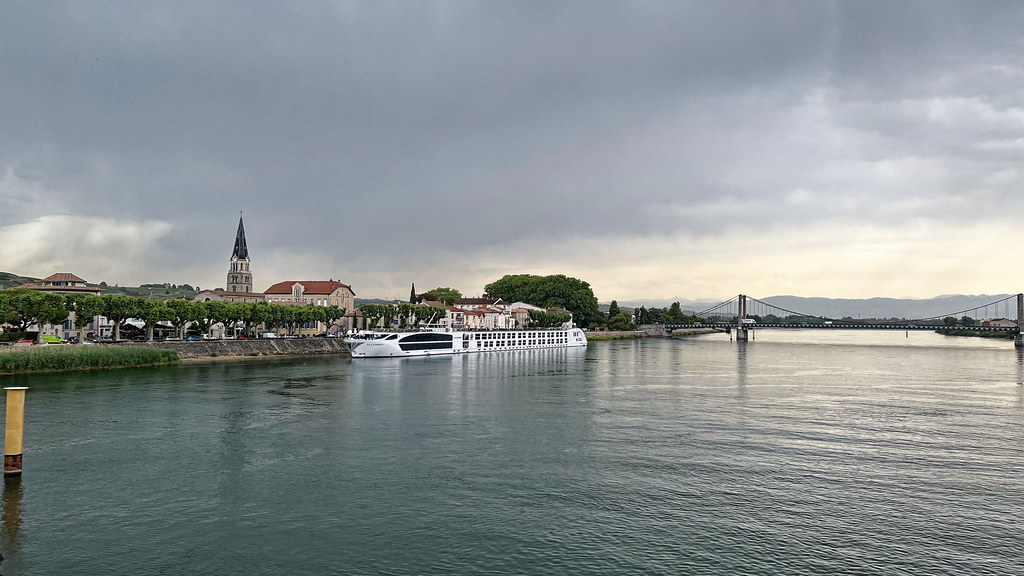 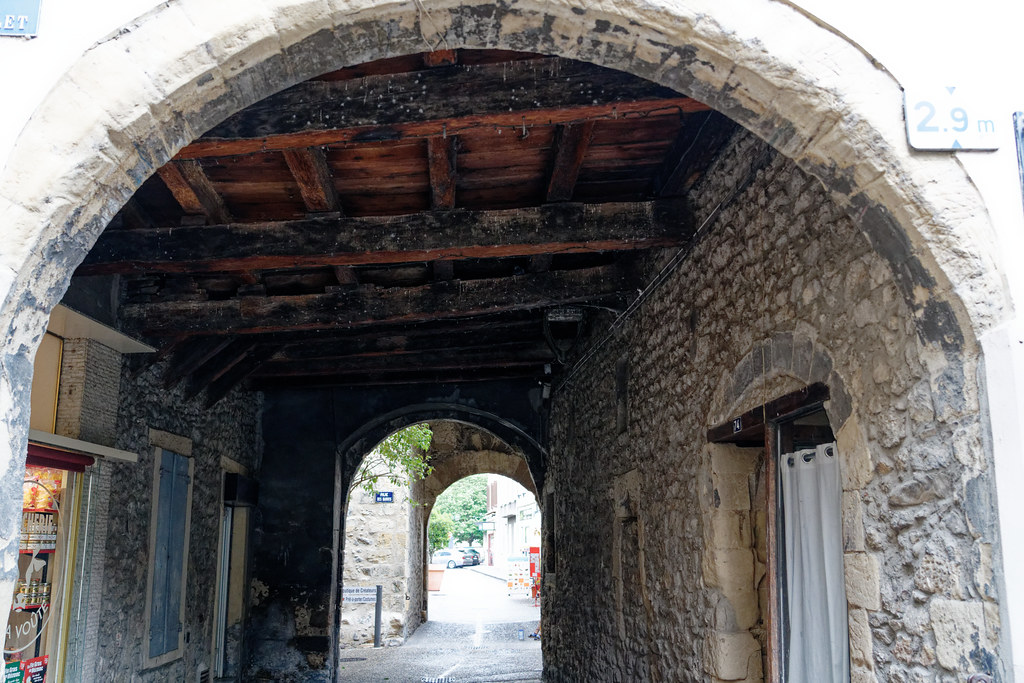 The forecast didn't call for rain, but dark clouds gathered and it did rain for about 20 minutes. We were told that there had been no rain for a month and the growers, who are not allowed to irrigate, were getting nervous. I don't think it was enough rain to make much difference, but it all helps. After the rain stopped, the sun came out and the temperature rose quickly. The high forecast for the day was in the mid 90s, and for the next day in Viviers, 101! Yikes! 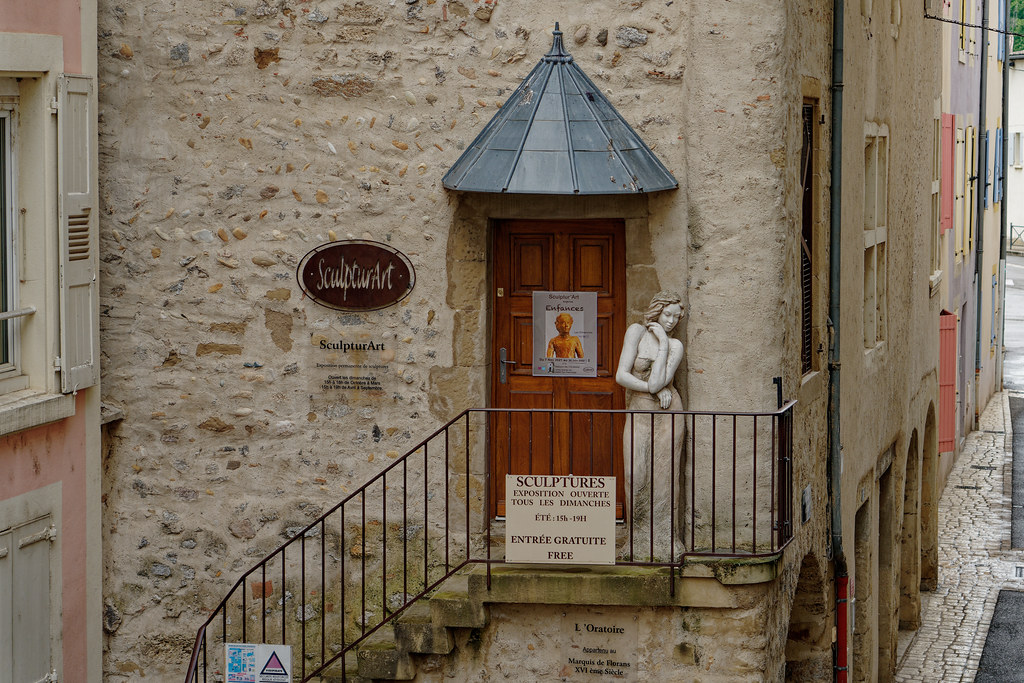 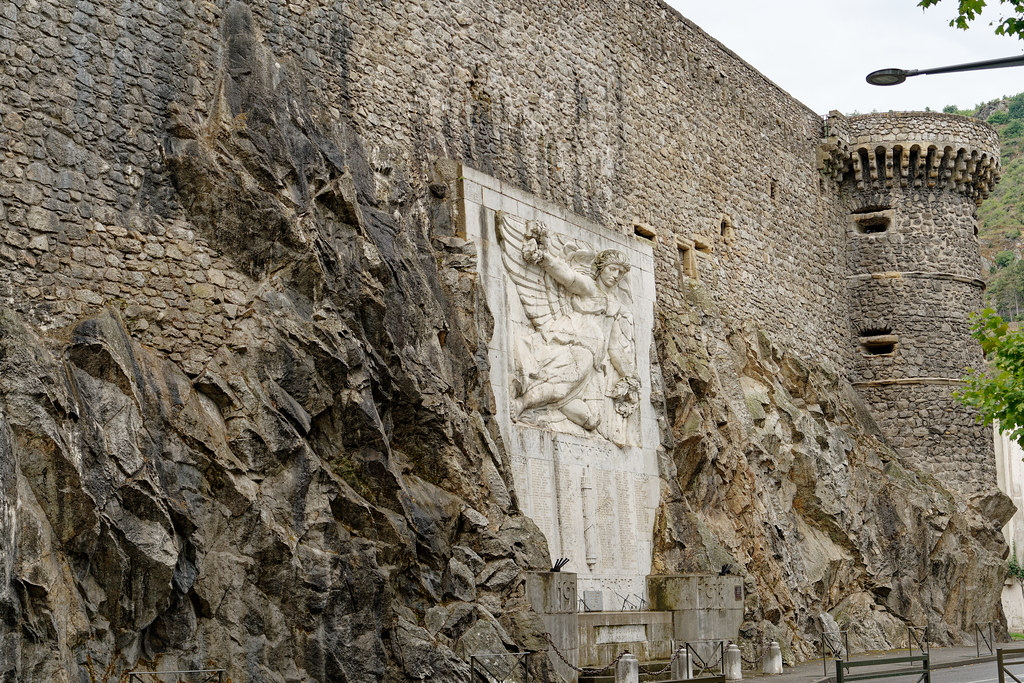 It seems most every French town is proud of something a local person invented - this time it was a suspension bridge using cables instead of chains. The county where Tain is located has no trains, no highways, no airports; the county with L'Hermitage has all of these. It is not surprising, then, that l'Hermitage is the "high-rent district", and Tain the "wrong side of the tracks", but both towns have their charms. 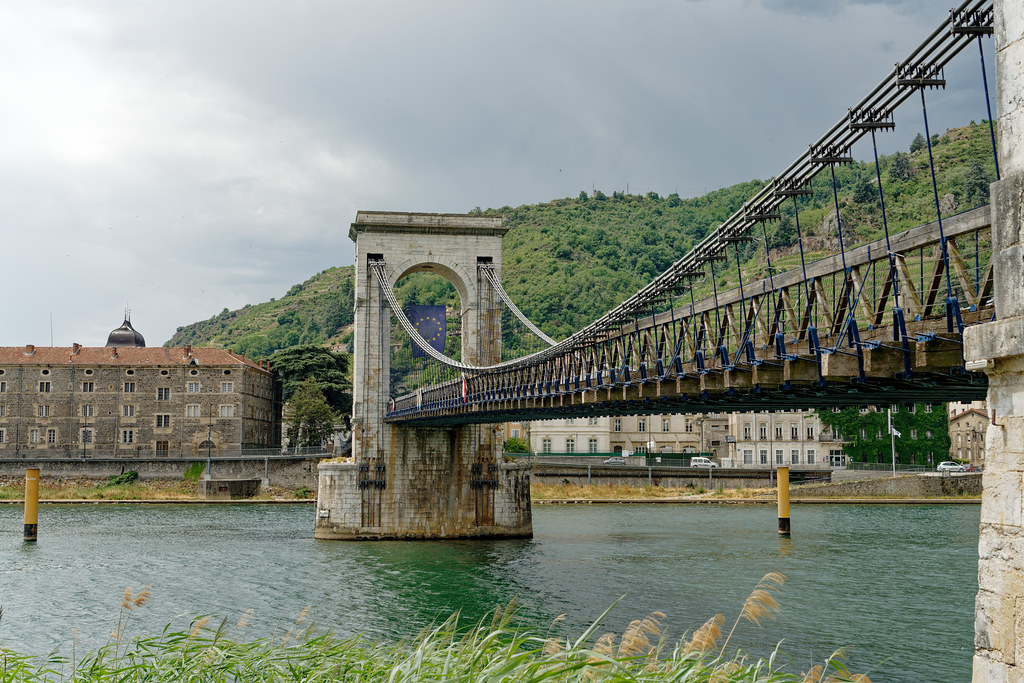 L'Hermitage Hill has some exclusive vineyards and produces expensive wine. Wine designated Crozes Hermitage are from plots surrounding the premium ones. We had a tasting of three wines, including one Crozes and one Hermitage (selling for EUR70/bottle). I didn't care for any of them - too tannic for me (and the white too acidic), but Leslie liked all three. The Hermitage 2017 might be nicer (for me) with 3-5 years cellaring, but I would not buy it. 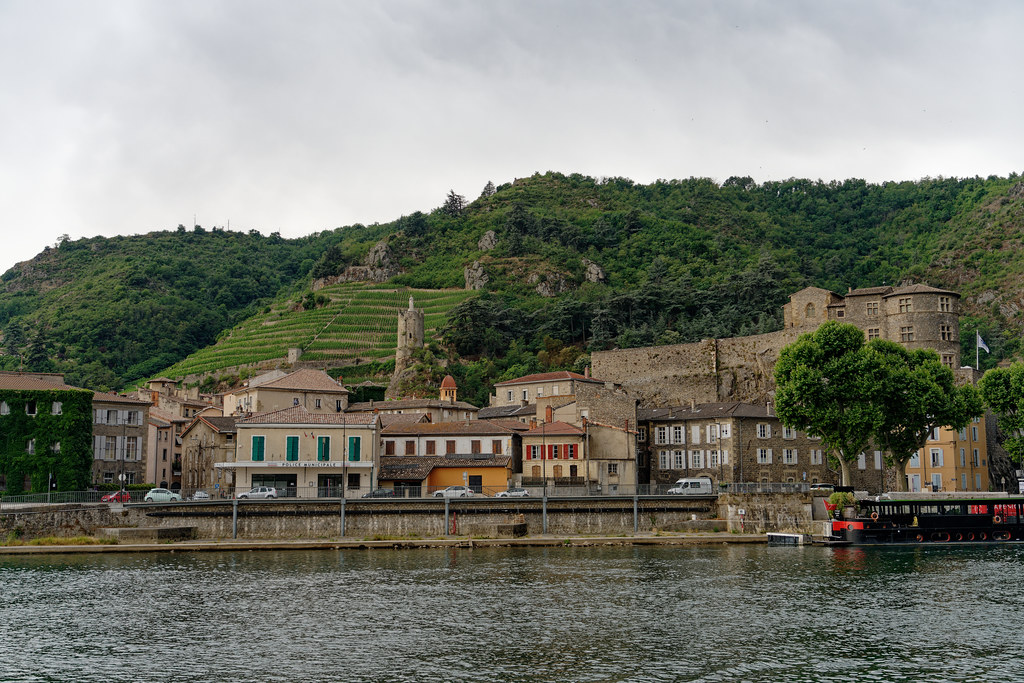 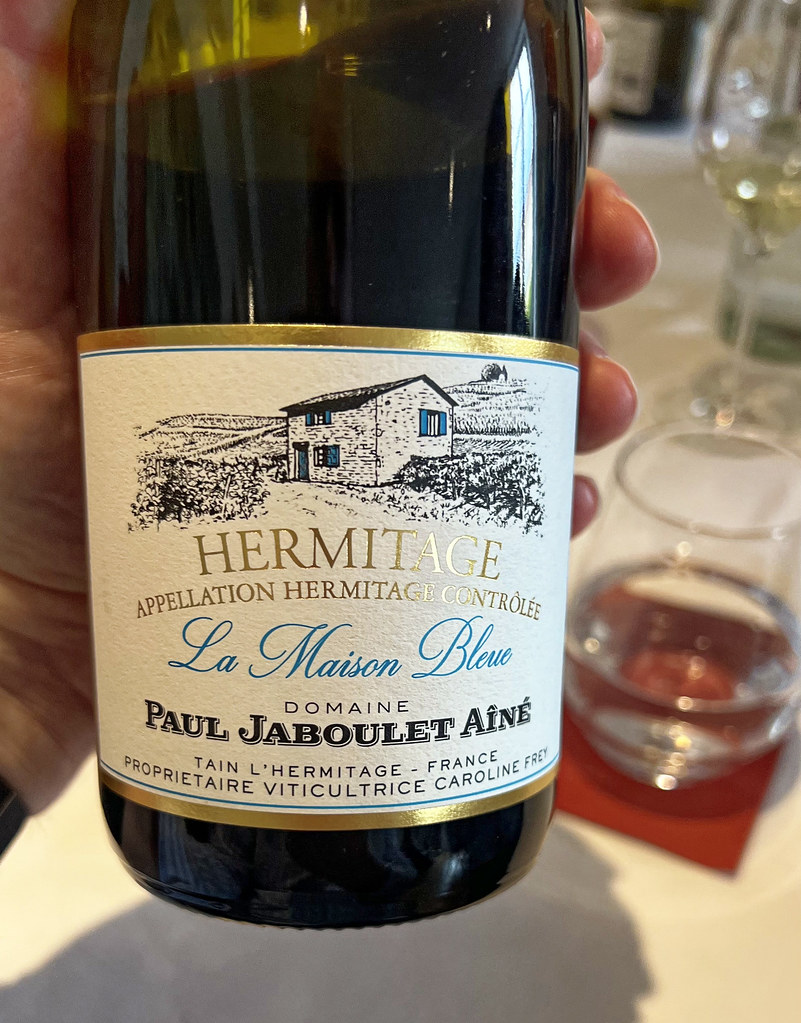 Viviers was the major reason we chose this itinerary. We were here as part of our 2012 trip, and fell in love with it. Viviers hasn't changed in that time, that I can see. We even returned to the pottery shop where Leslie had bought her favorite wine cup, in order to buy a new one. 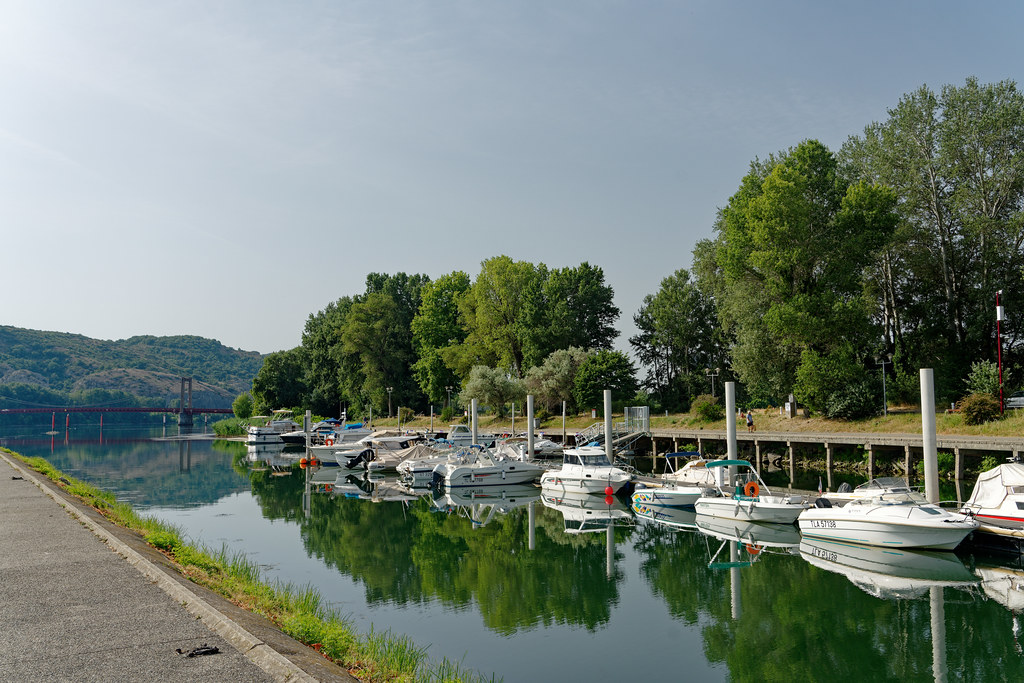 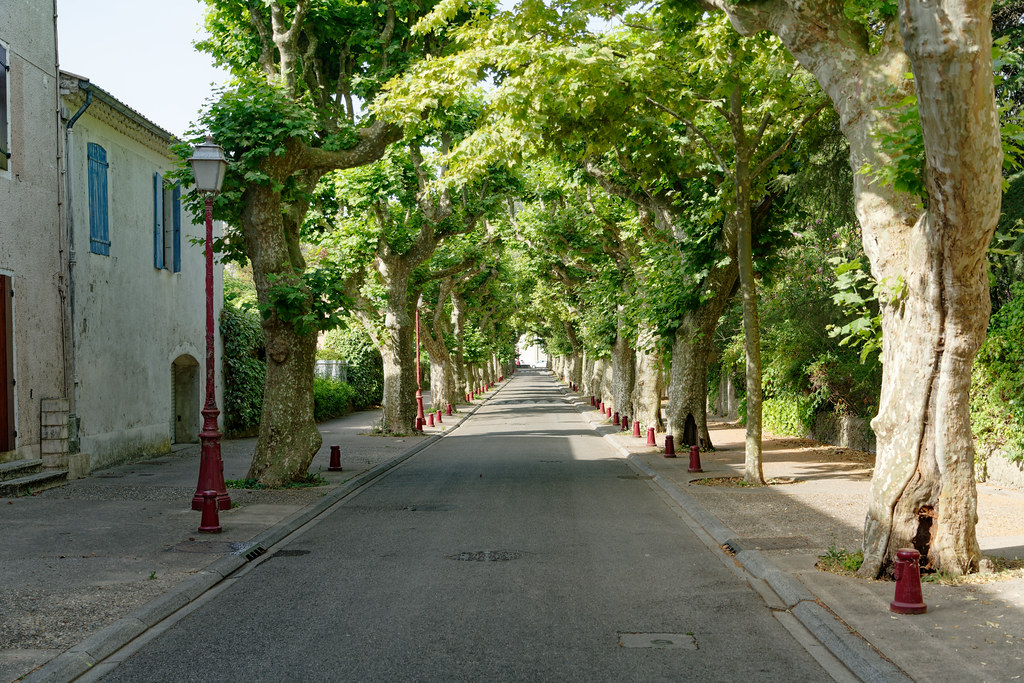 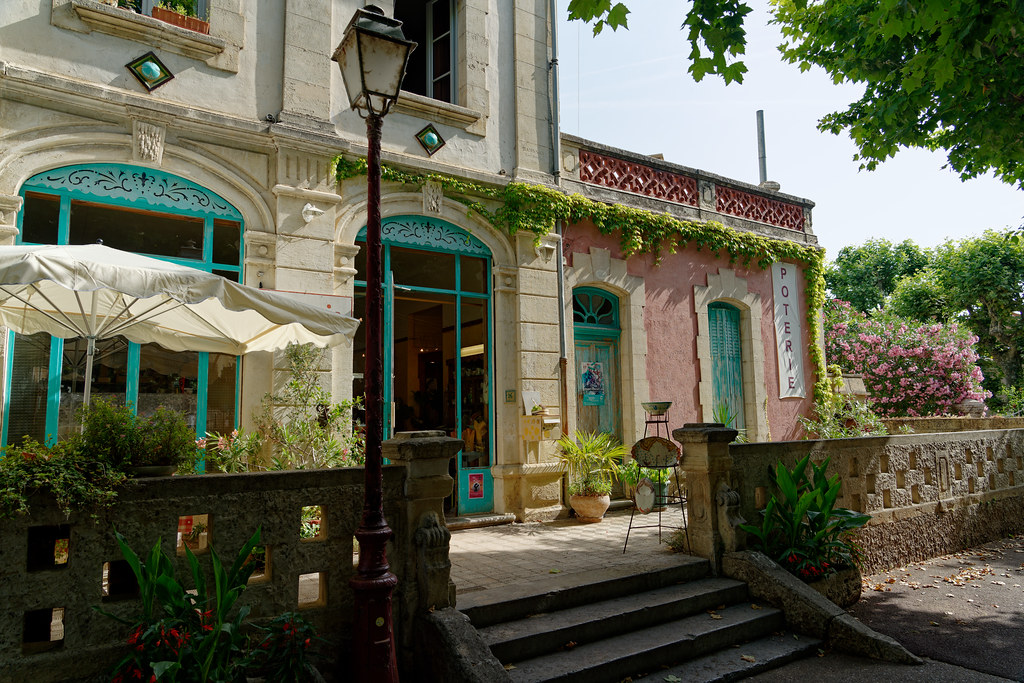 Rather than take the formal tour, Leslie, Gingy and I wandered the town at a leisurely pace in the morning, before the temperatures climbed into the high 90s. We got to see parts we had not seen before, ducked into little shops here and there, and made blinky-eyes with a gorgeous tortie-tiger cat. 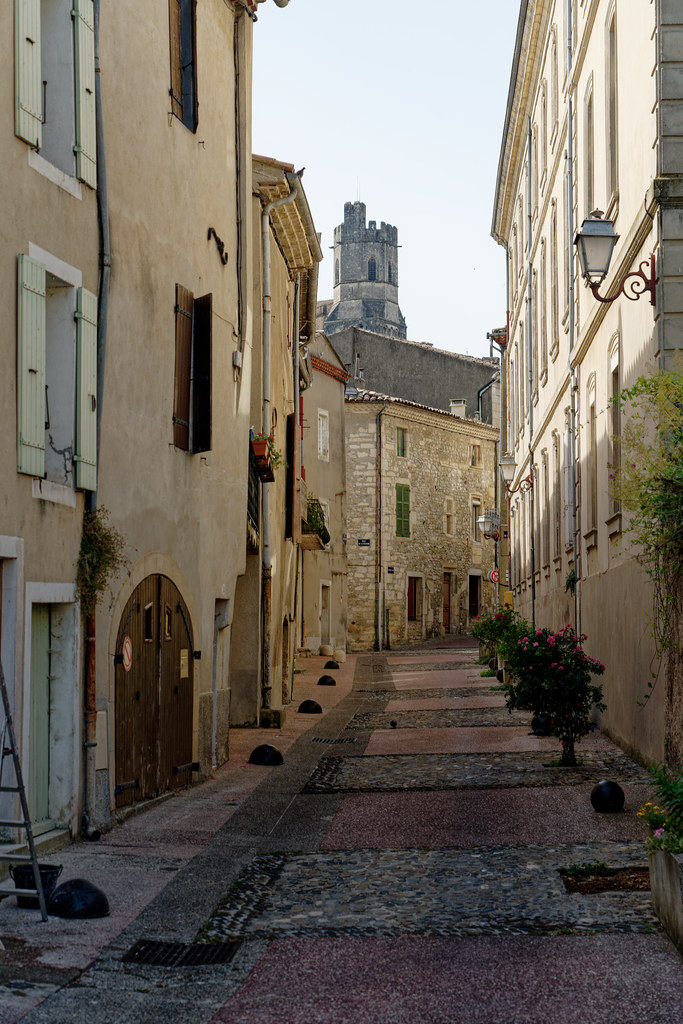 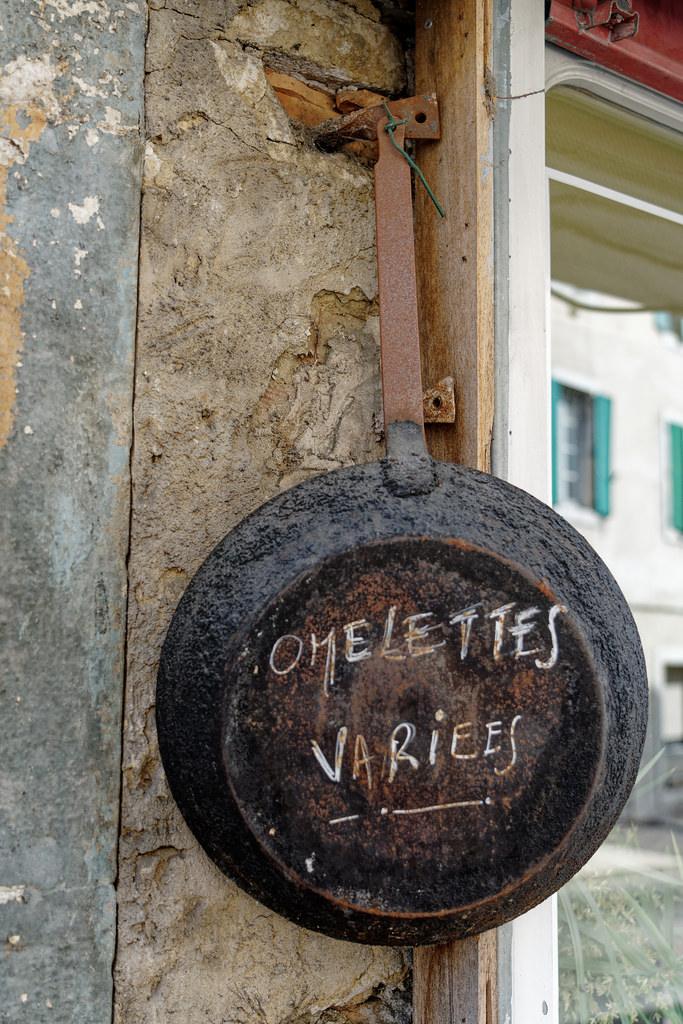 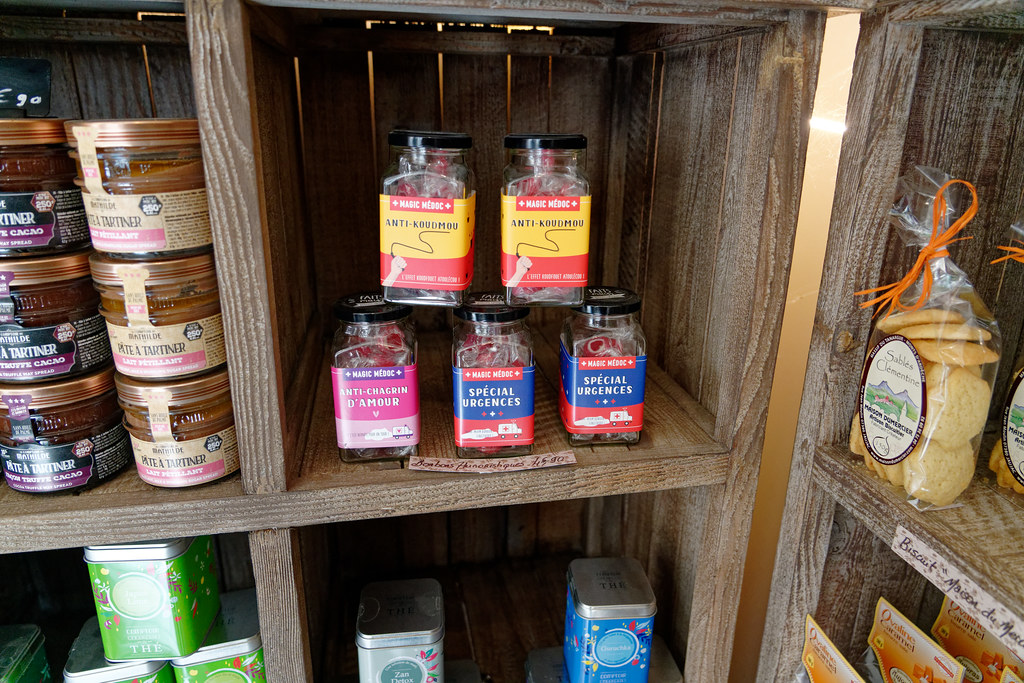 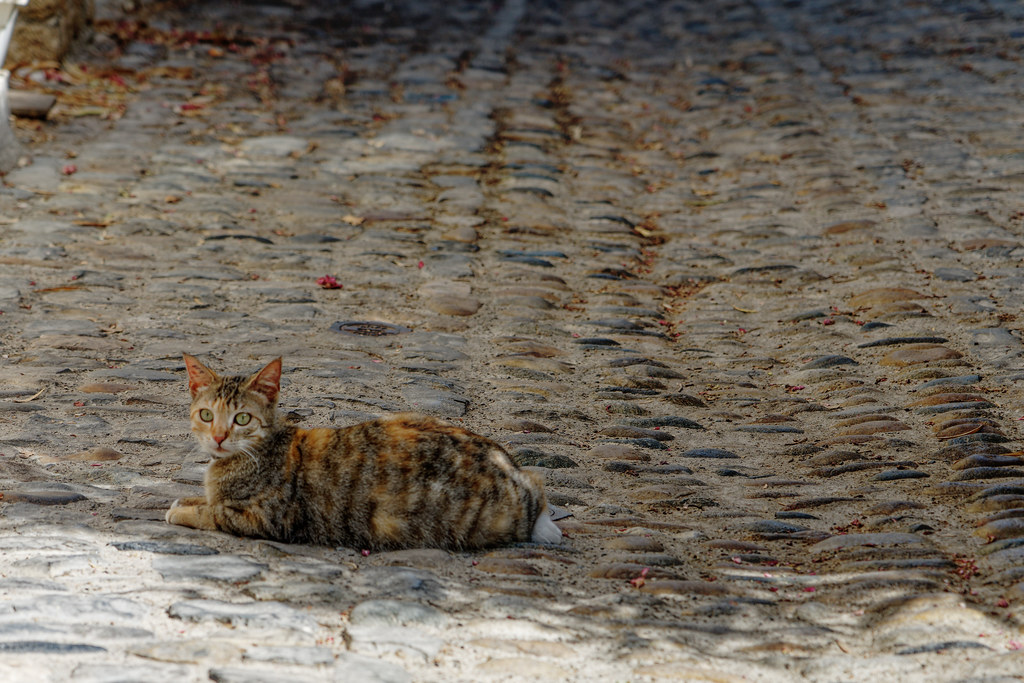 Here and there I saw, attached to walls, small ceramic pieces with what looked like child handprints and footprints embossed, names and dates (all around the year 2000). I asked Tania, the tour leader, what they were - she said they were left by people who built the houses, but I think she just made that up as the places I saw these weren't always houses and those that were dated from centuries before 2000. As in other towns, I was delighted by the whimsical decorations found here and there throughout the town. 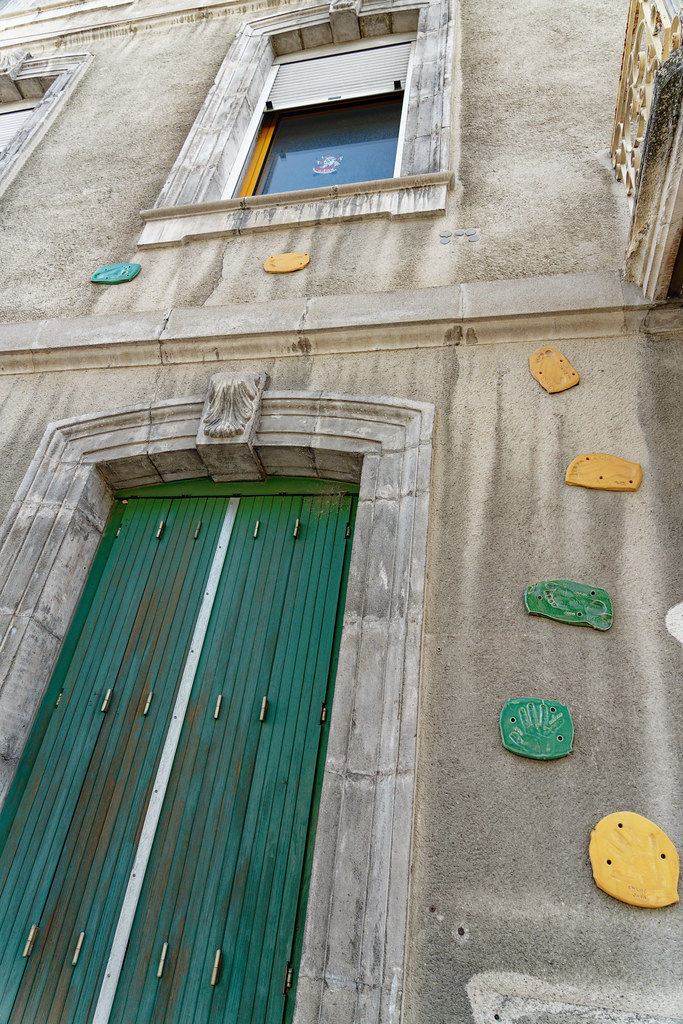 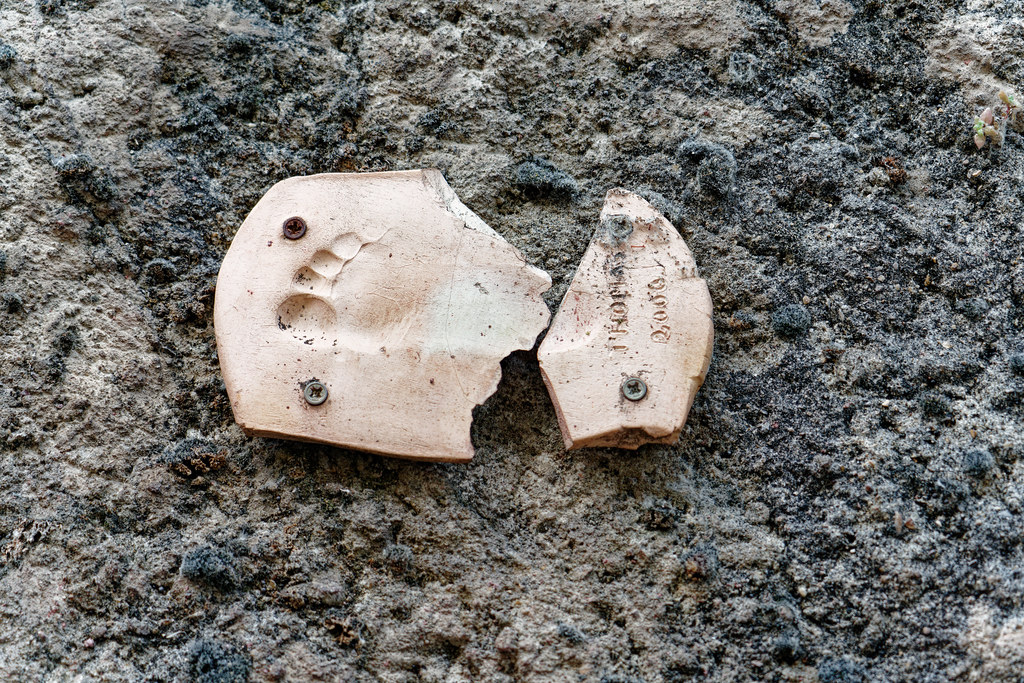 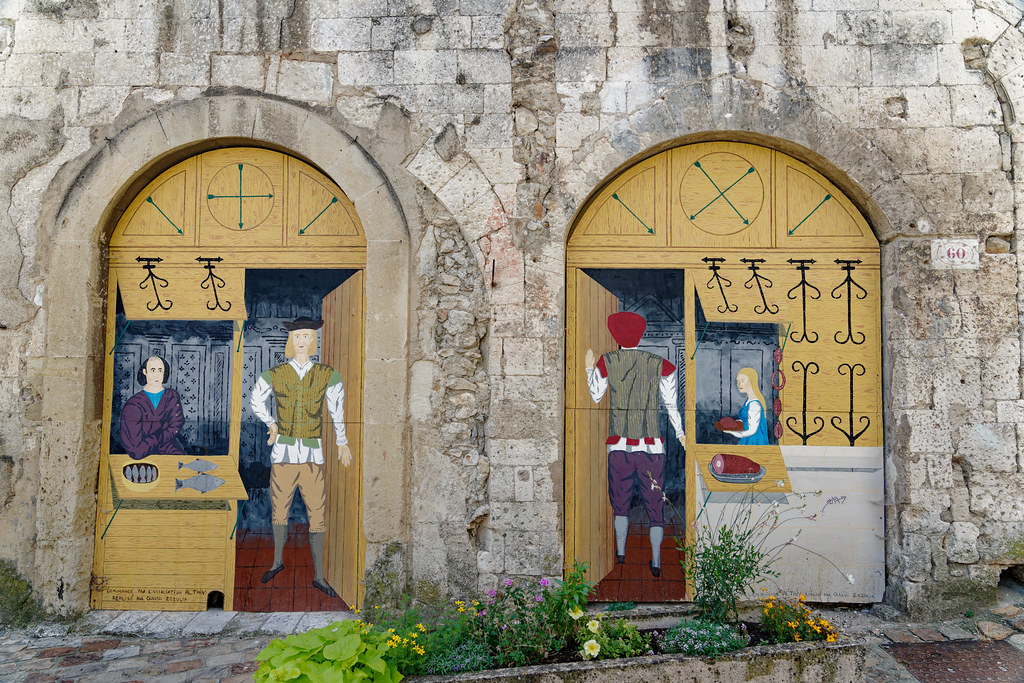 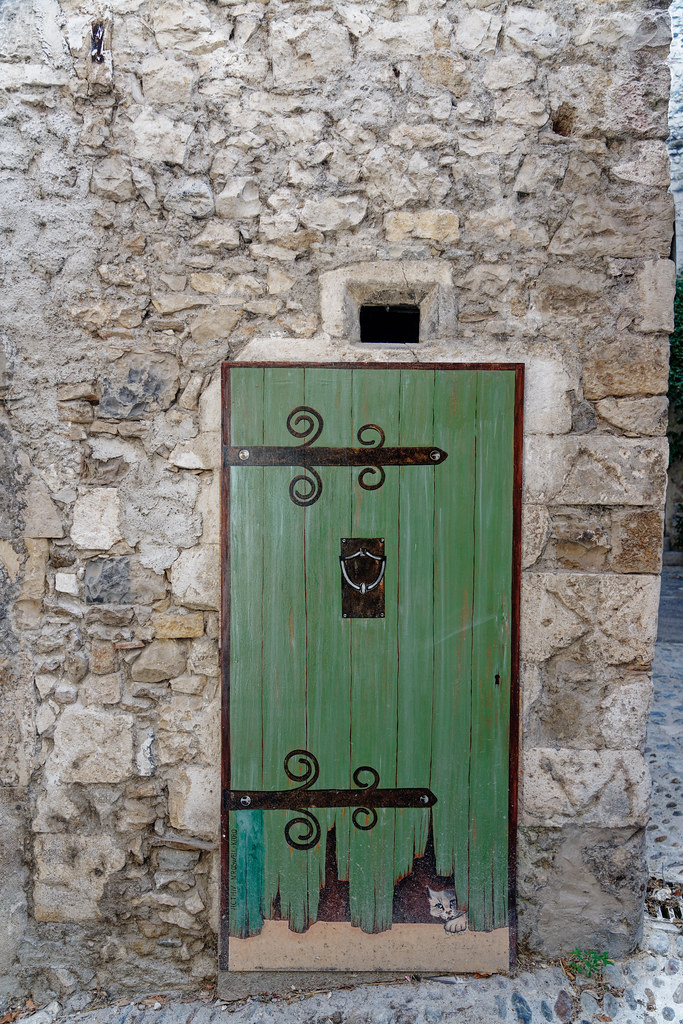 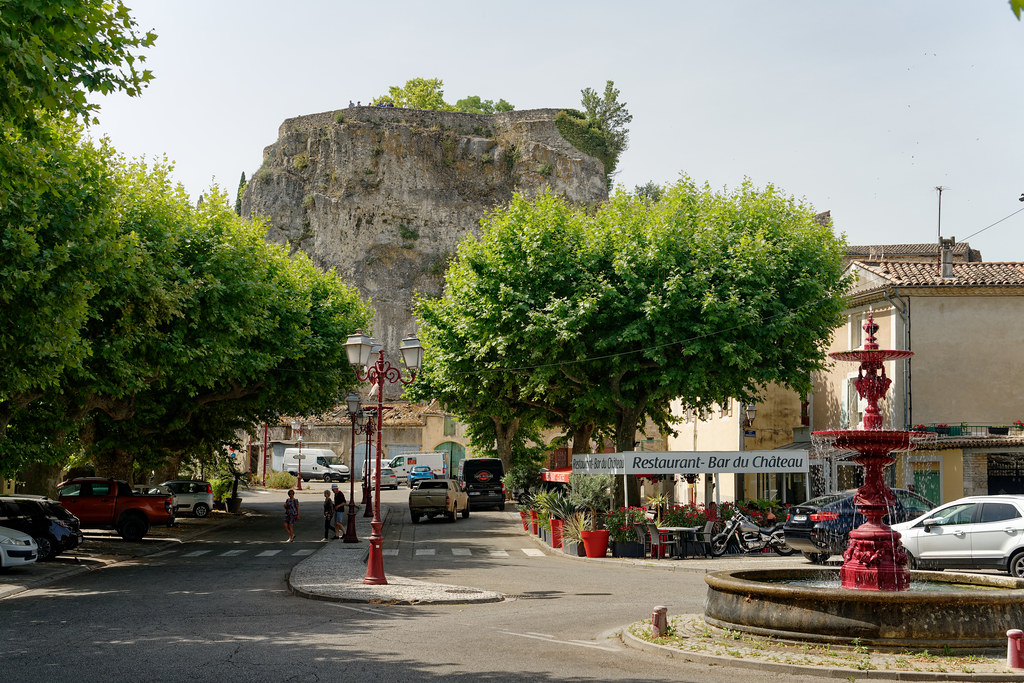 In the evening, we partook of an "Epicurean Feast" in the ship's Bar du Leopard, a small space at the rear of the ship. We asked Ivan to snag us the one table for four (the rest of the seating was banquettes) and he did. 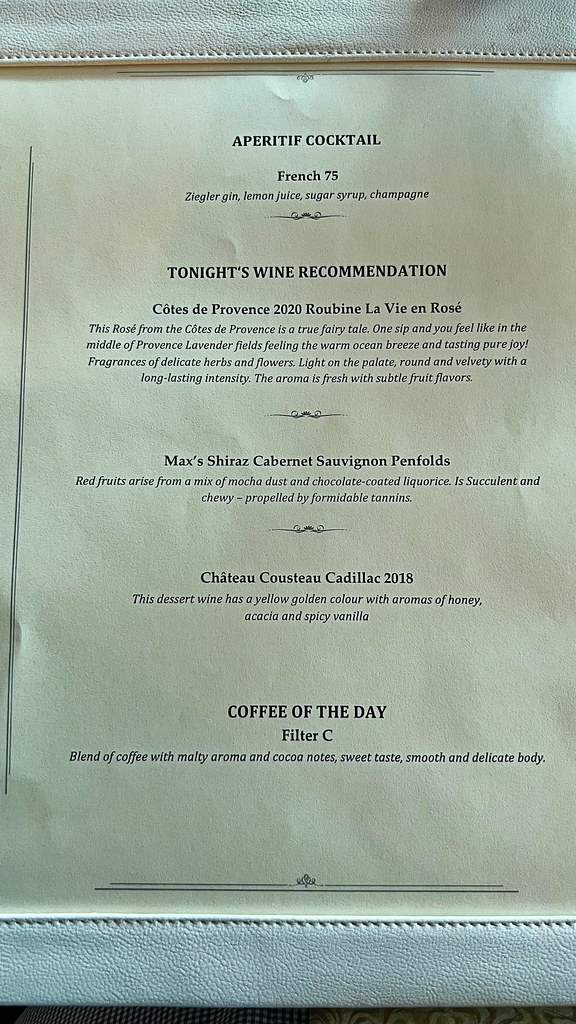 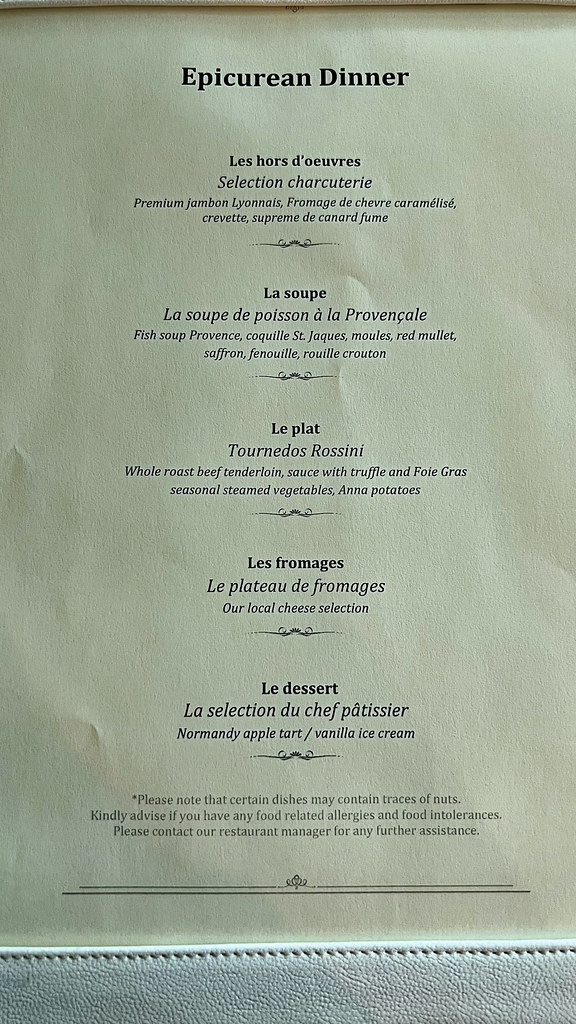