The only event this day was a visit to Moulin de Porchères, an historic flour mill with machinery dating to the 1930s. While the mill stopped operation in 2002 due to a fire in some outbuildings, volunteers have continued to maintain the mill in operable state and there is a plan to restart production. The mill is highly automated in that grain is moved from machine to machine by a series of complex pipes (originally wood, replaced with PVC as they wore out), up and down across three levels. 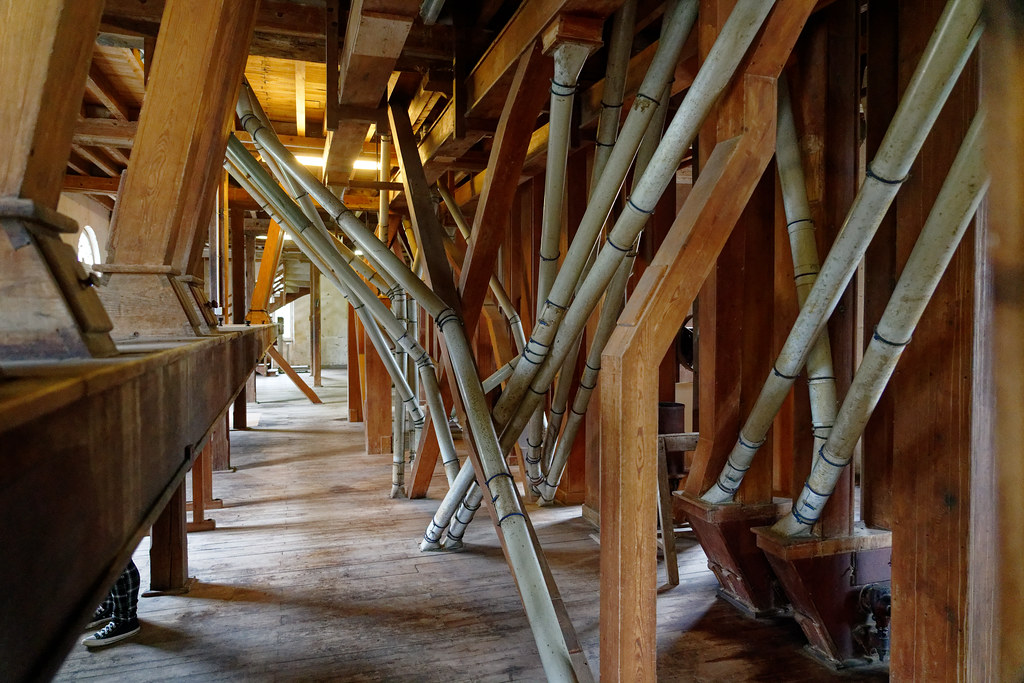 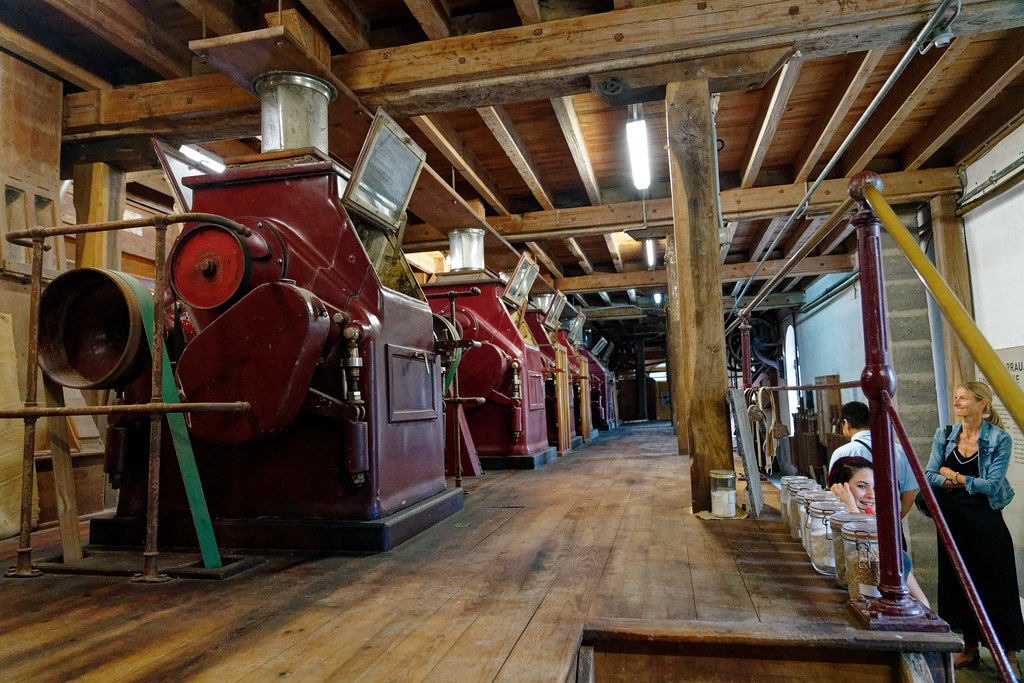 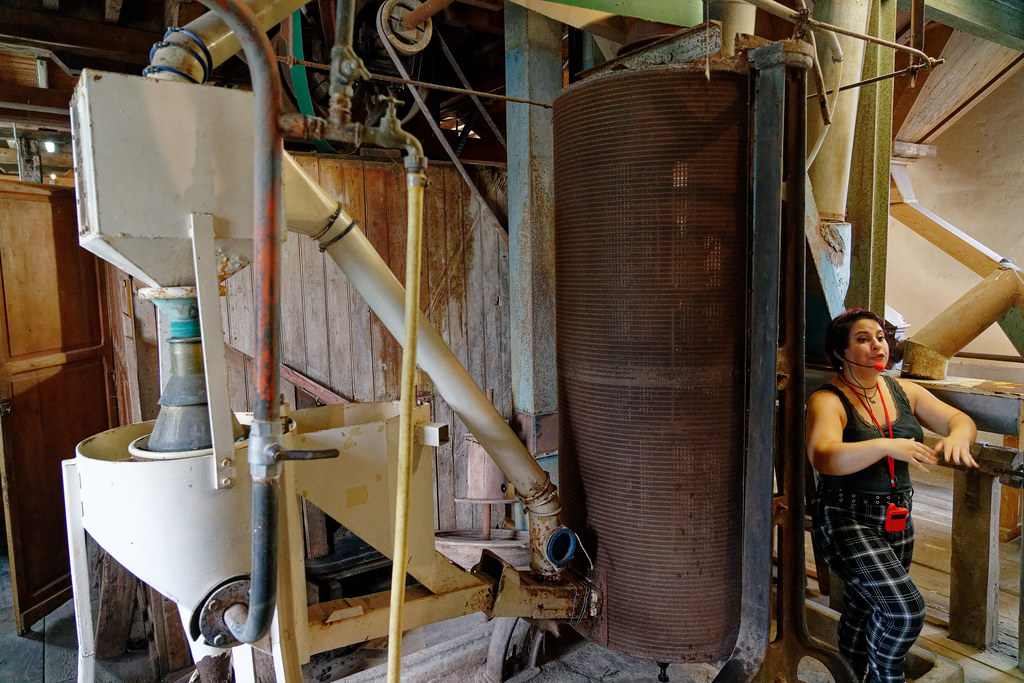 The mill is powered by a waterwheel and a series of belts and crankshafts to run the grinders, sifters, etc. The grinding stage is especially clever in how it regulated speed, with a pair of brass weights on arms attached to a shaft. If the speed was too low, the balls would drop and a metal protrusion on the shaft would ring a bell once per revolution alerting staff; too high and the balls would raise high enough to ring the bell twice per revolution. Ever mindful of flour dust explosions, a vacuum system collected dust and expelled it outside. 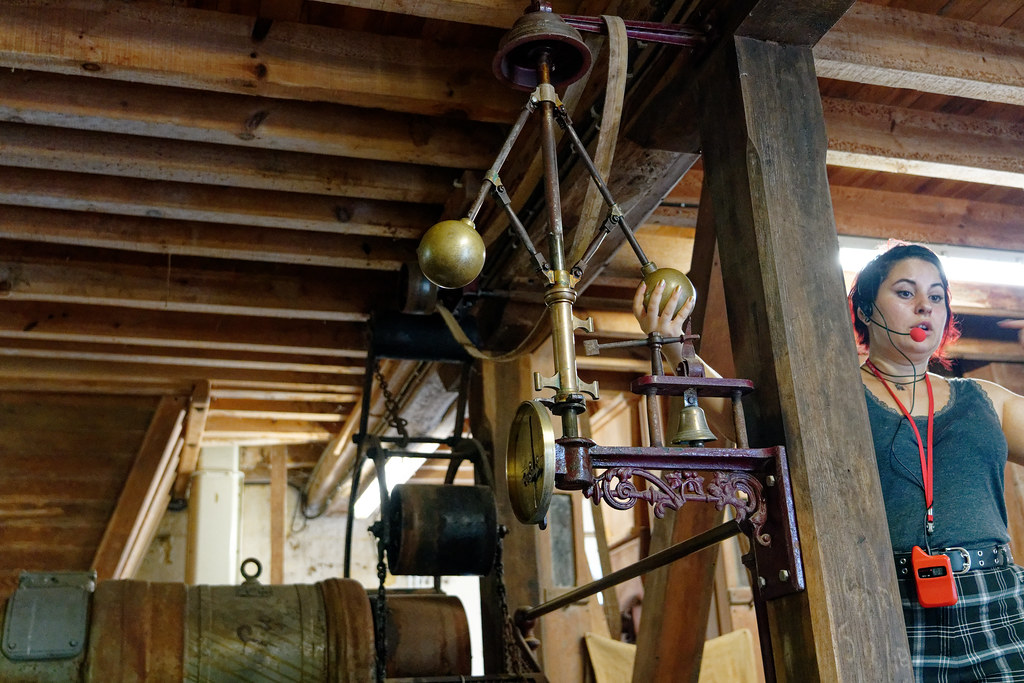 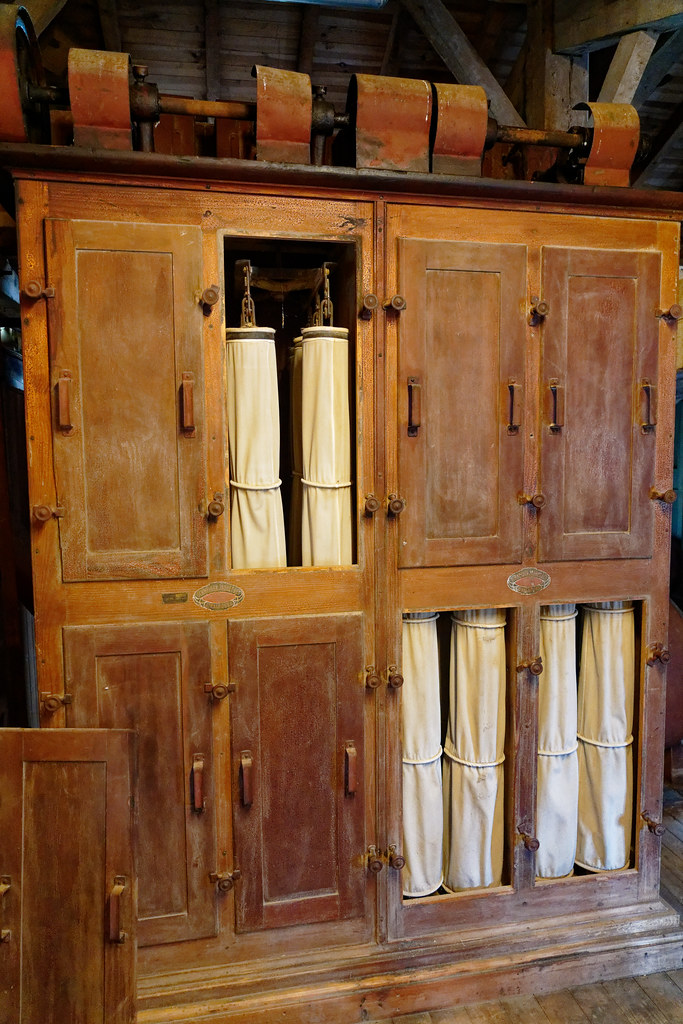 We had a short demonstration of how to roll mini-baguettes, and then baguettes were baked while we were touring and handed out after the tour. Various types of locally produced flour were sold - we bought a kilo of a "rustic" mix that included "remoulage", normally a waste product from the grinding. I've since made a couple of batches of baguettes from this flour and they were delicious.

Back in Bordeaux, we skipped the various tours, having spent a week in Bordeaux only two months earlier. Taking the tram back to the stop beside the InterContinental hotel, where we had stayed earlier, the first thing I noticed was that the "Sanna" sculpture I had photographed was now surrounded by scaffolding and bracing that suggested it was being moved. We walked up to Bistrot Girondin, where Leslie and Gingy were looking forward to the "Salade du BIG" with gizzards and duck hearts, only to find it was not on the menu that day. We then walked farther down Rue Sainte-Catherine to the Agent Paper store we wanted to show Gingy. Towards the end of our previous visit we had tried this, only to find it was closed that day. Checking in advance that it should be open on Saturday, we got there only to find a note saying the store was closed June 3-6. Sigh. All was not lost, though, as the women ducked into multiple clothing shops and Leslie found some nice scarves.

For lunch we returned to "Any Tea", a shop in Passage Sarget near the InterContinental and where we had a nice lunch before, and again had delicious entrées. We were seated next to the shop window where a variety of fabulous looking pastries were on display, and we all had our choice of those. Scones that looked like huge muffins, served with clotted cream, honey and fruit syrup, a strawberry tart and a pavlova (meringue and fruit). After lunch, Leslie and Gingy revisited a hat shop in the Passage where Leslie had bought a fedora during on earlier trip; this time both women bought hats. 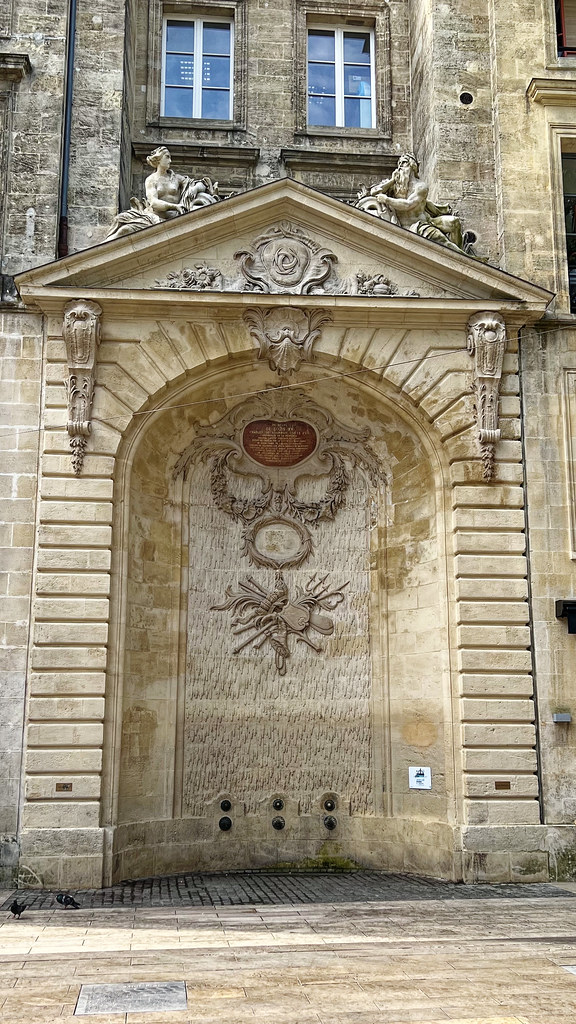 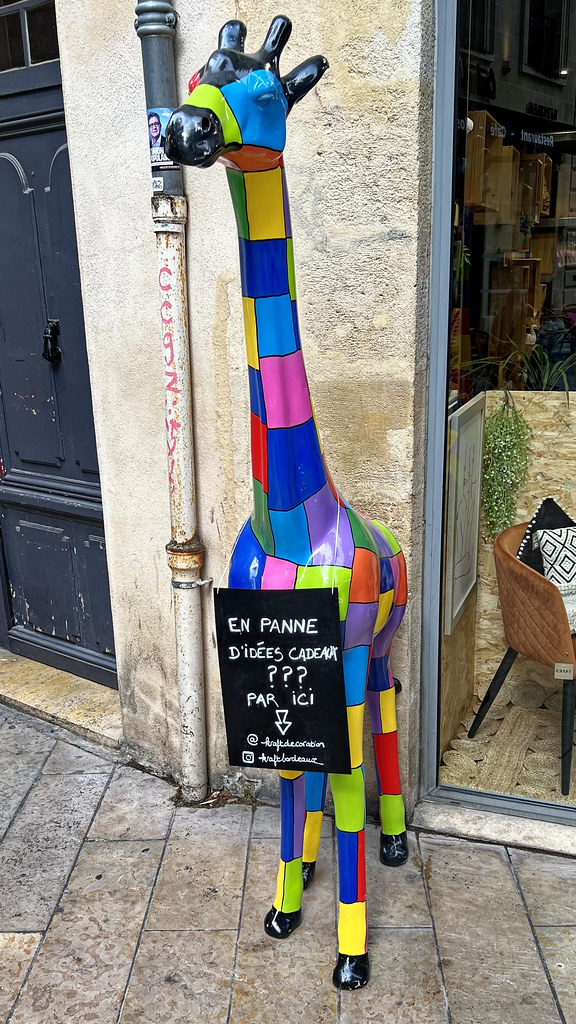 The rest of the day was taken up with packing for the next morning's transfer. We were pleased to see that we would not be leaving until 8:30AM, which meant a rational alarm time. Passengers who were flying home to the US the next day could have their COVID test performed onboard, which is convenient. Sadly, we were informed at the final talk in the lounge that several passengers had tested positive. The protocol there was that they were isolated in their cabins and would be transferred to lodging in Bordeaux to wait out their illness. Uniworld would help them redo their travel plans, but this is not something anyone wants to have happen. The US requirement for a negative COVID test, since rescinded, was still in effect despite furious lobbying by the travel industry. I know quite a few people from our earlier trip who tested negative before flying home, yet developed COVID within a day or so of their return. It wasn't a useful policy.