We traveled by bus to Bassin d'Arcachon, an upscale tourist town on an ocean inlet. Here we had a short time to kill before we boarded a ferry to Cap Ferret, so Leslie took advantage of the time to walk on the beach, Gingy took a ride on the carousel, and I just wandered around looking at what was there. 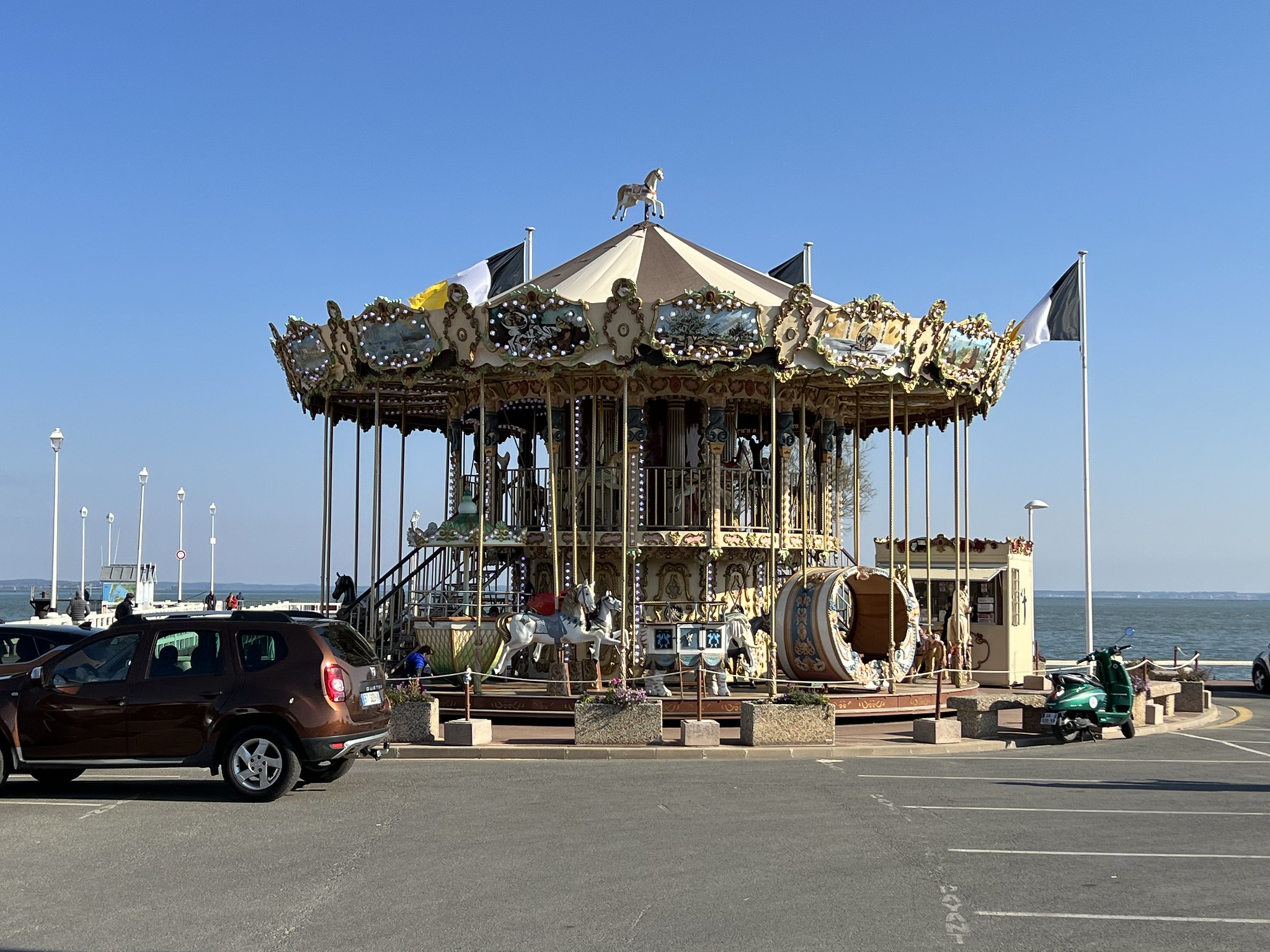 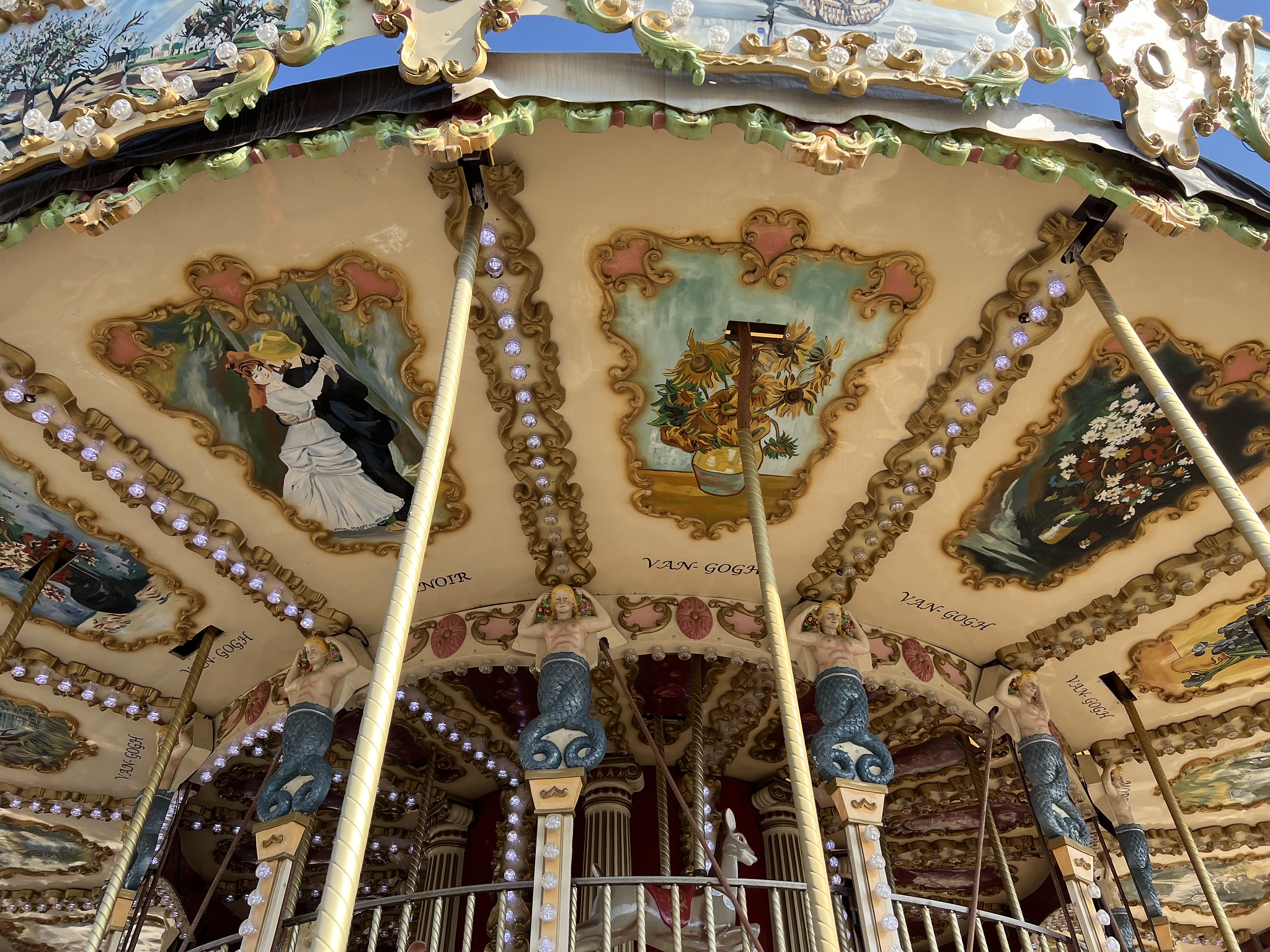 The boat trip to Cap Ferret was about 20 minutes, and then we had another 20 minute or so walk to our lunch location, Chez Boulan, a cabane à huitres (oyster cabin), where they sold oysters, but were not allowed to cook any food. 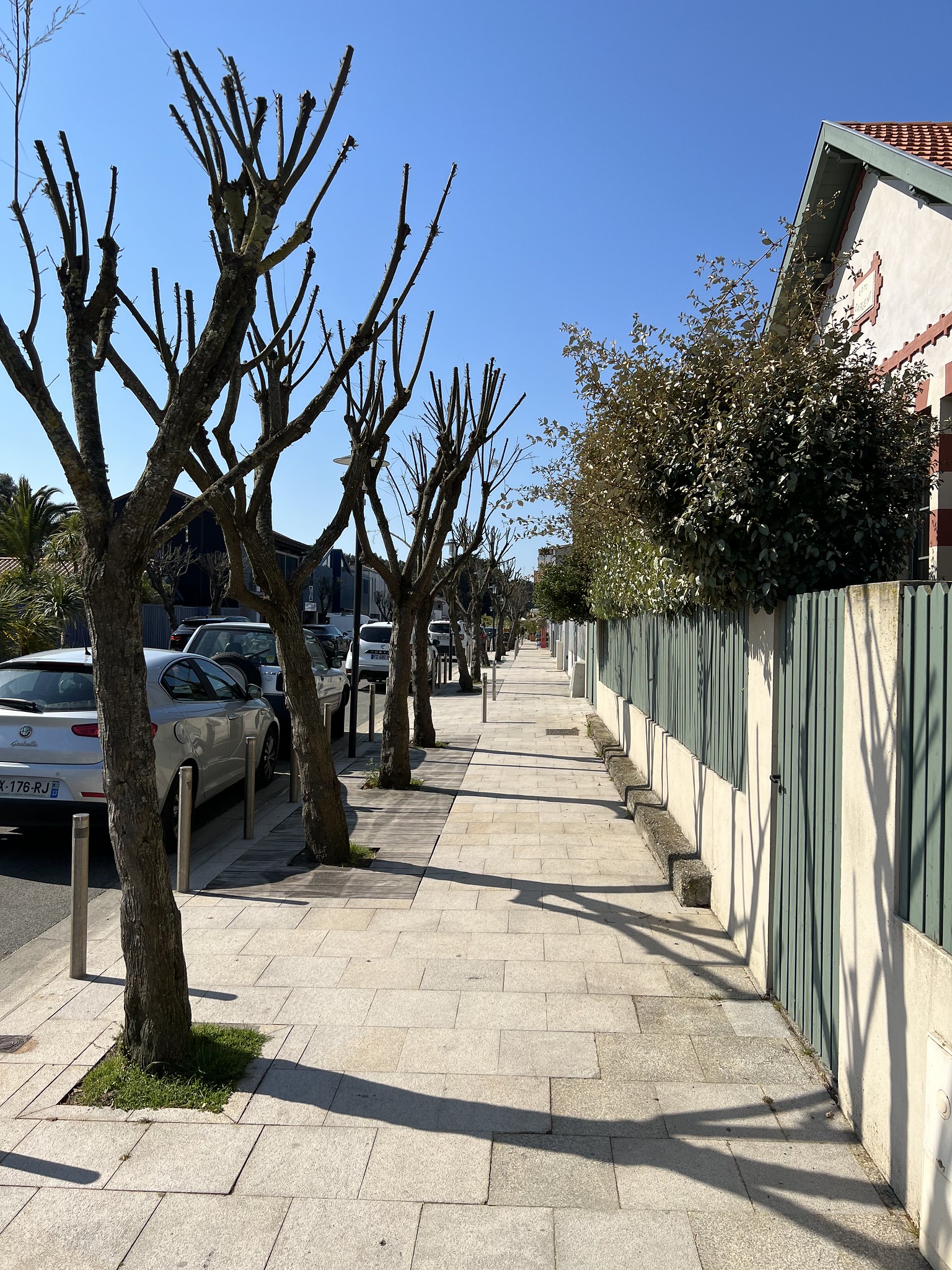 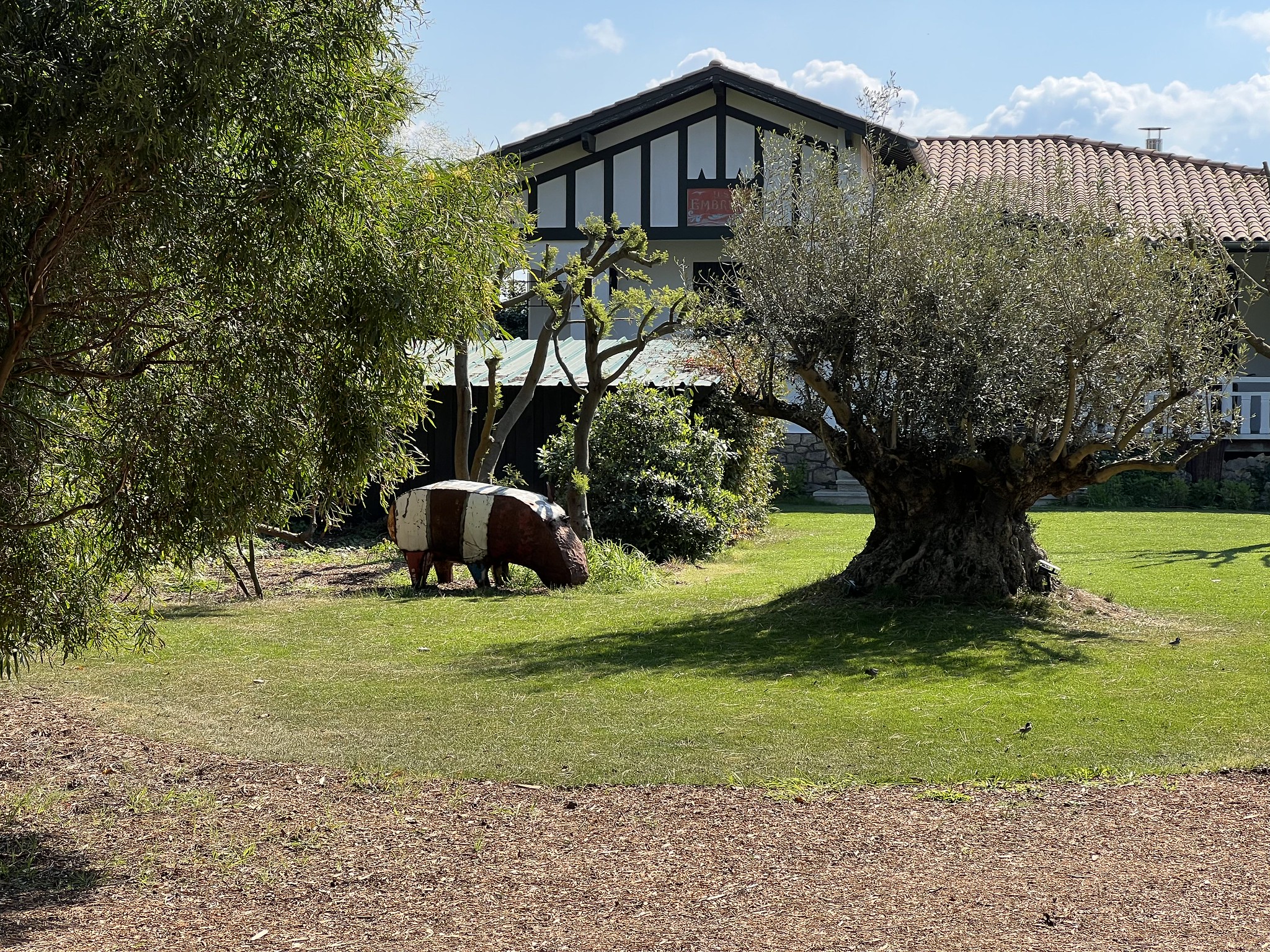 Some of us (raises hand!) don't eat oysters, so there was also shrimp, and of course lots of good bread (with various spreads) and wine. The setting was outdoors, and it was a bit on the cool side, but the sun was shining and it was fine. 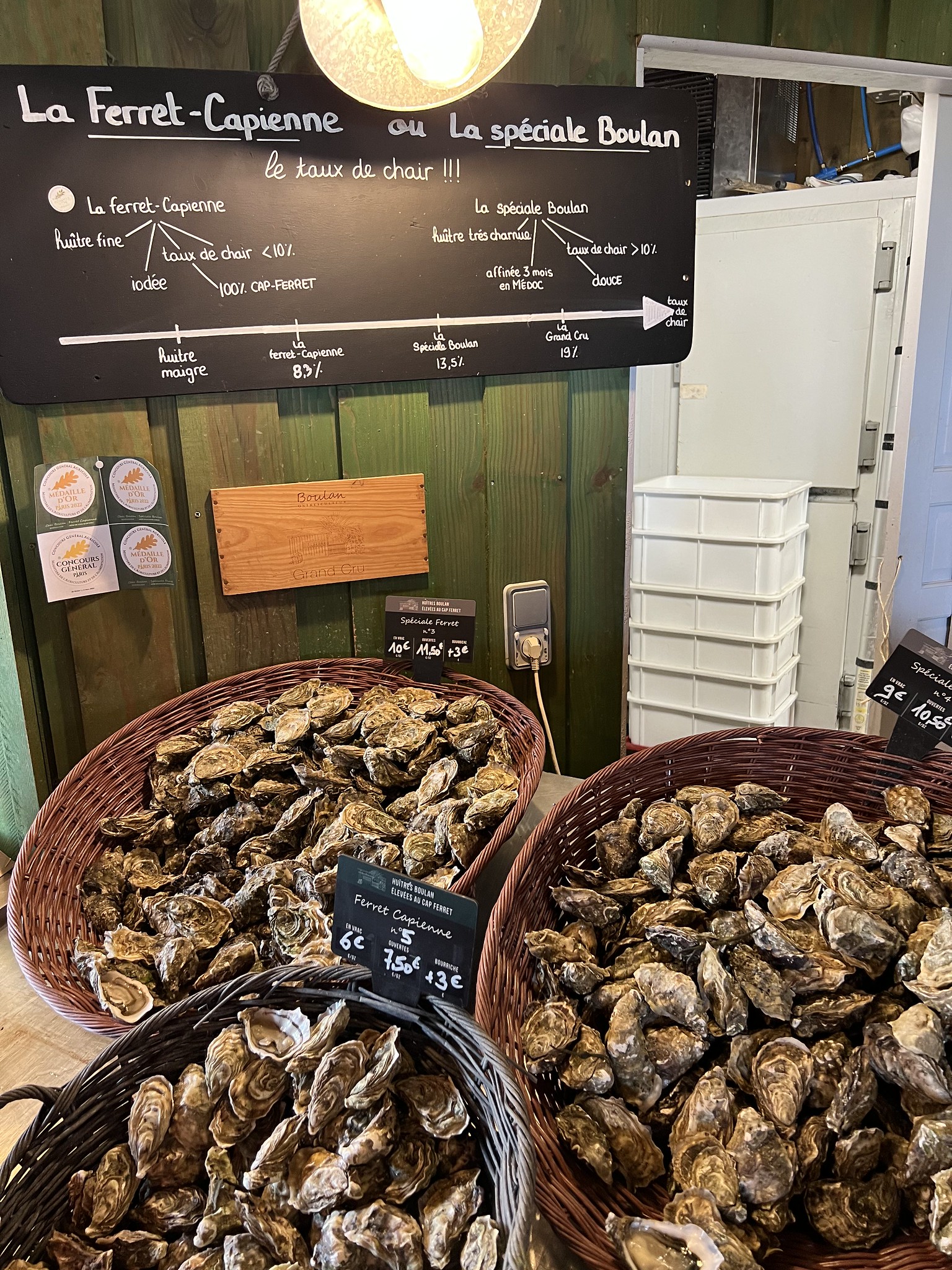 The bus picked us up (it would have taken about an hour-plus to drive around the cape), and headed to the Medoc region to visit Chateau Siran winery, where we had a tour of the winery and samples of various of their wines. It was here that I learned about an aspect of wine naming I had never known. There are terms you'll find on French wine labels that are based on particular plots of vineyards and their "terroir" (soil type primarily). The top level and most exclusive is Grand Cru. Below that are Premier Cru and then Village, but this doesn't necessarily mean a decrease in quality. Indeed, when we tasted the three classifications of Siran's wines, both Leslie and I preferred the least expensive Village wine. Indeed it was so cheap (about ten Euros a bottle) that it would have cost more to ship than to buy. 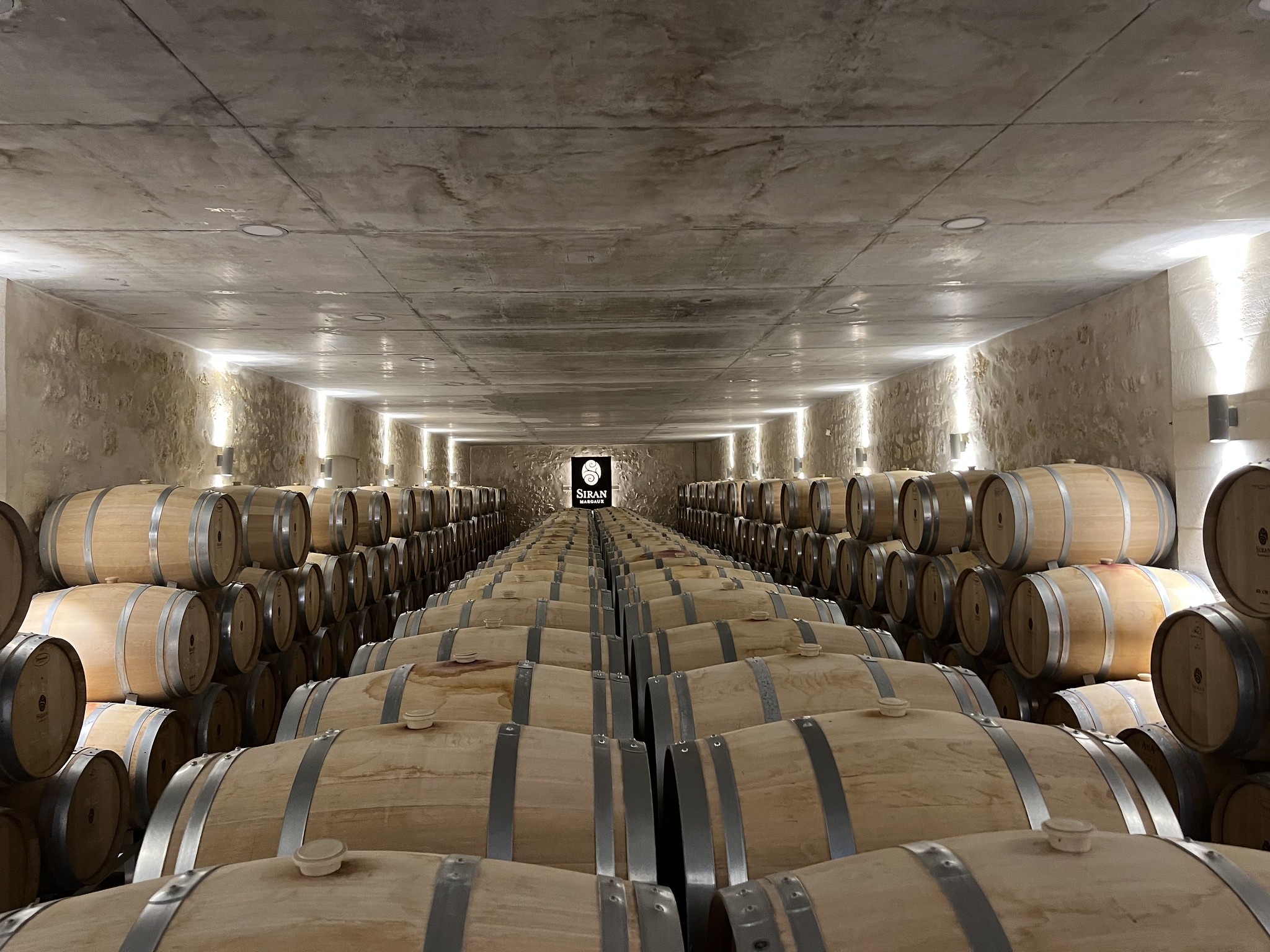 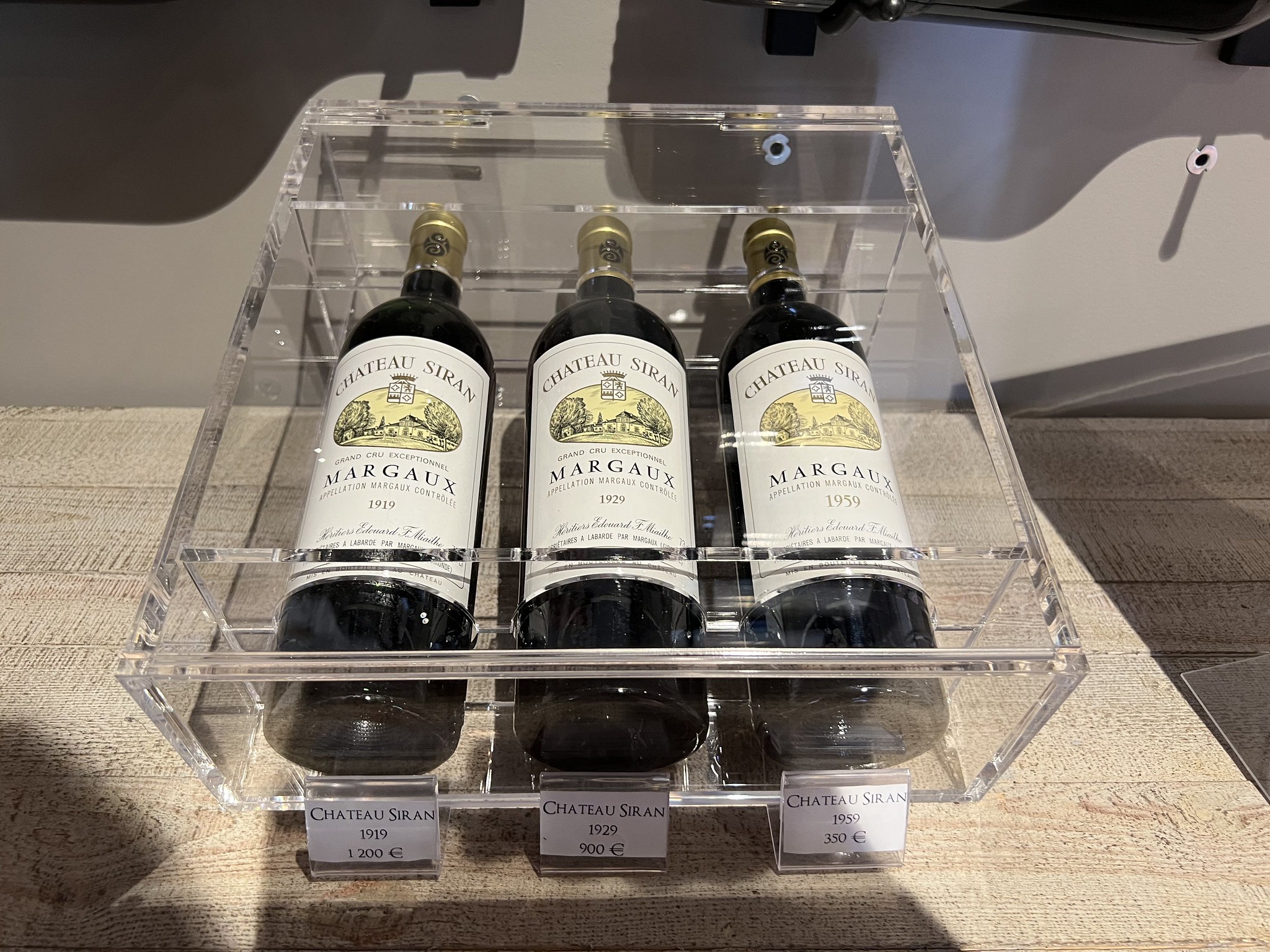 The owners of Siran also collected original art, including these wine casks that had been used at inns. 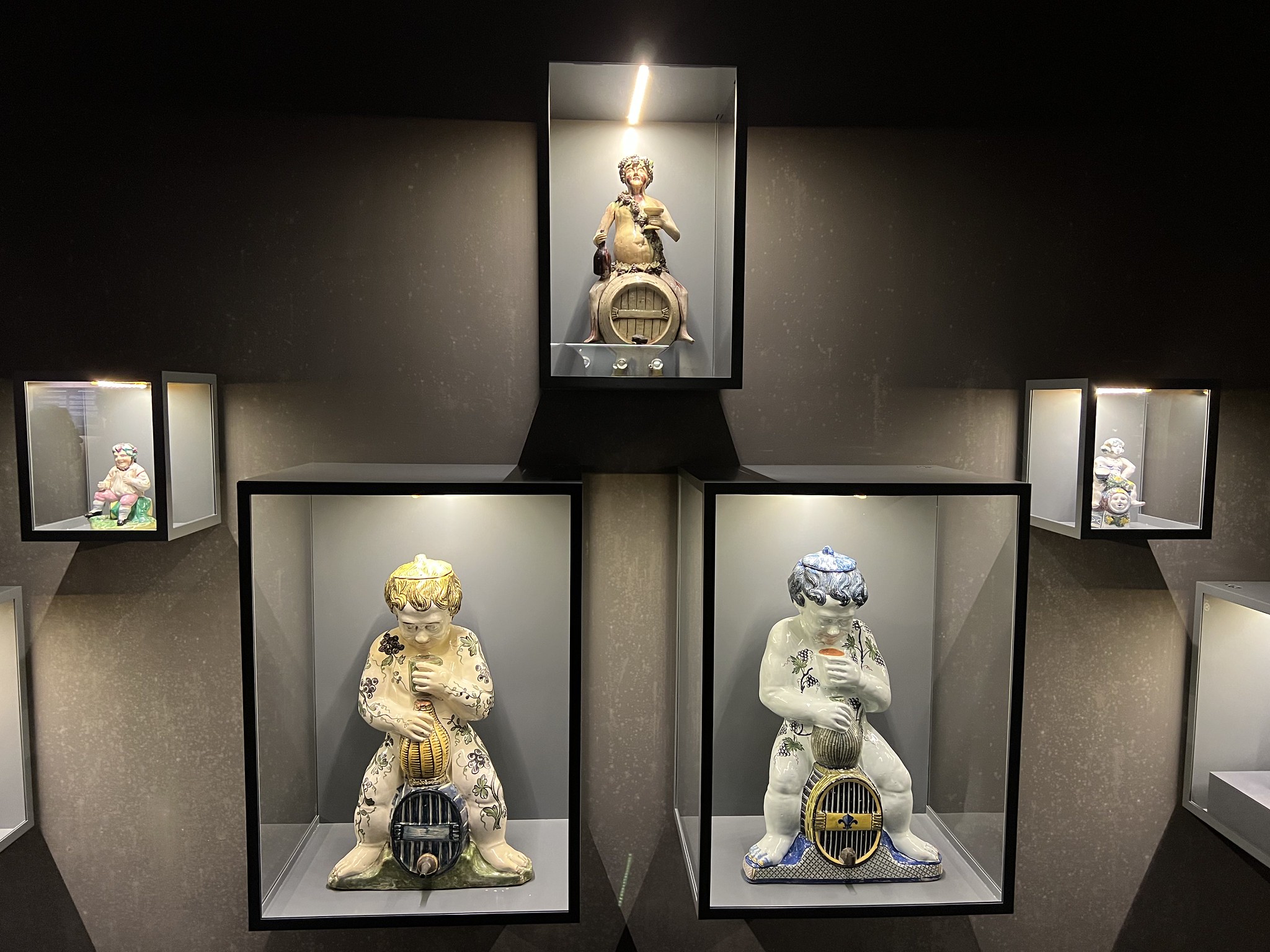 We took the tram to La Cité du Vin (The City of WIne), a museum of wine history and wine appreciation. The Bordeaux tram runs every four minutes from beside our hotel (in fact, we could see the tram stop from our room) and drops us off a few minutes' walk from the museum. The tram is quiet (it's electric) and, through the central city, battery powered (outside the central part there are overhead wires to recharge.) The tram is cheap, too, with a two-trip ticket costing only three Euro, and frequent travelers can use a phone app to buy and activate tickets. 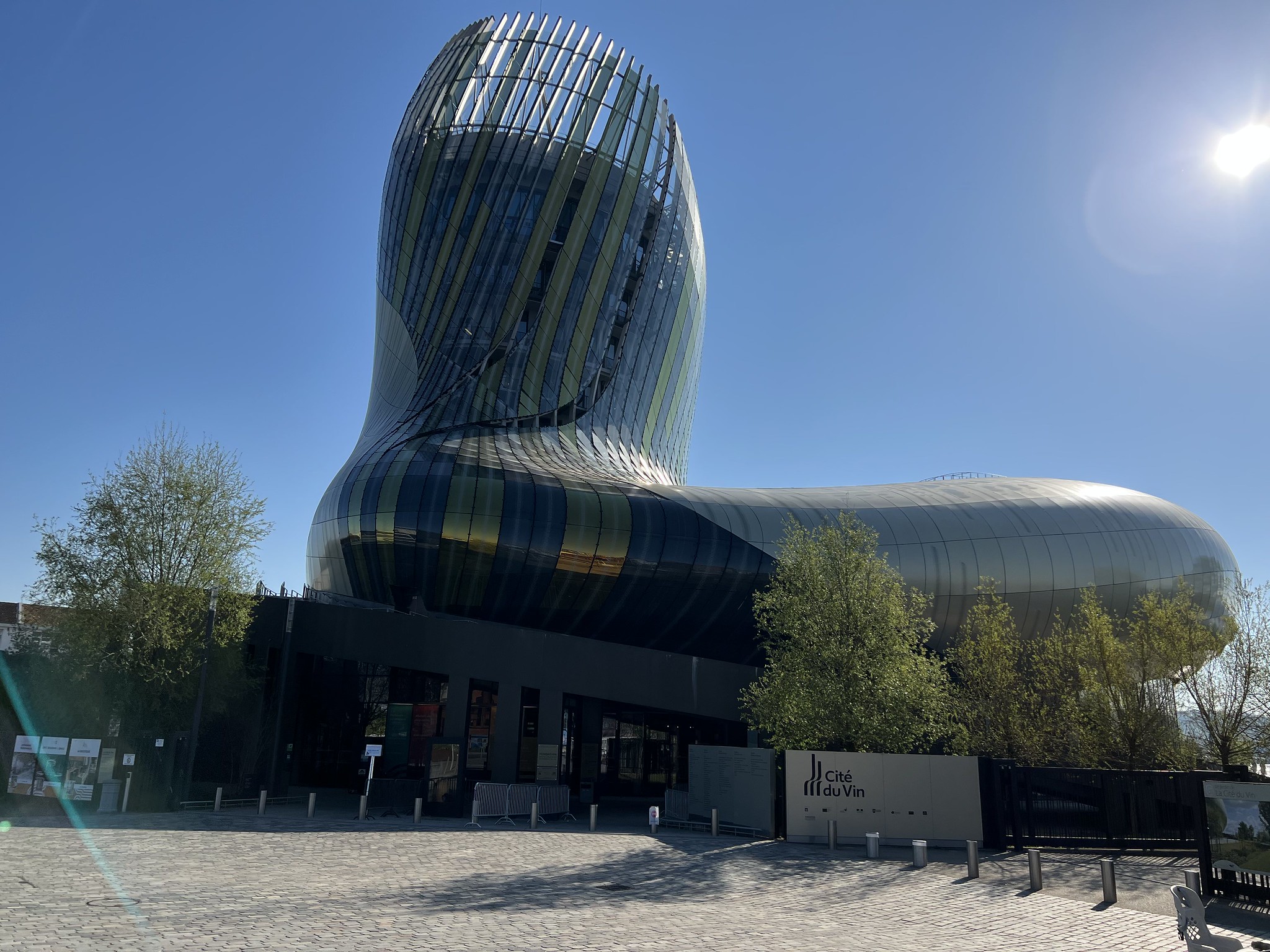 The museum's shape looks like a big shoe (I forget what it is supposed to symbolize.) I did not have high expectations for it, but it was interesting and informative. There were videos with winemakers in various parts of the world, explaining how their particular "terroir" affected the taste of wine, a lesson on phyloxia, a mite that devastated European vines and was overcome by grafting onto rootstock from the US(!), a section on the various senses related to wine - I especially enjoyed the scent section where you'd squeeze a rubber bulb to puff air into a cloche and the scent of the air within would come out brass trumpet-style horns where you'd sniff them. There were narrated and animated videos of wine through the ages, including my favorite part being the "symposium" where Greeks would gather and drink wine. (When we travel with our western-US buddies, we have a "symposium" most evenings.)

When one is done touring the exhibits, and after three hours I had not finished, you go up to the 8th floor where you can get a sample of your choice among many wines, French and otherwise. The server would explain where your choice came from, its makeup of grape varieties, and its flavor profile. 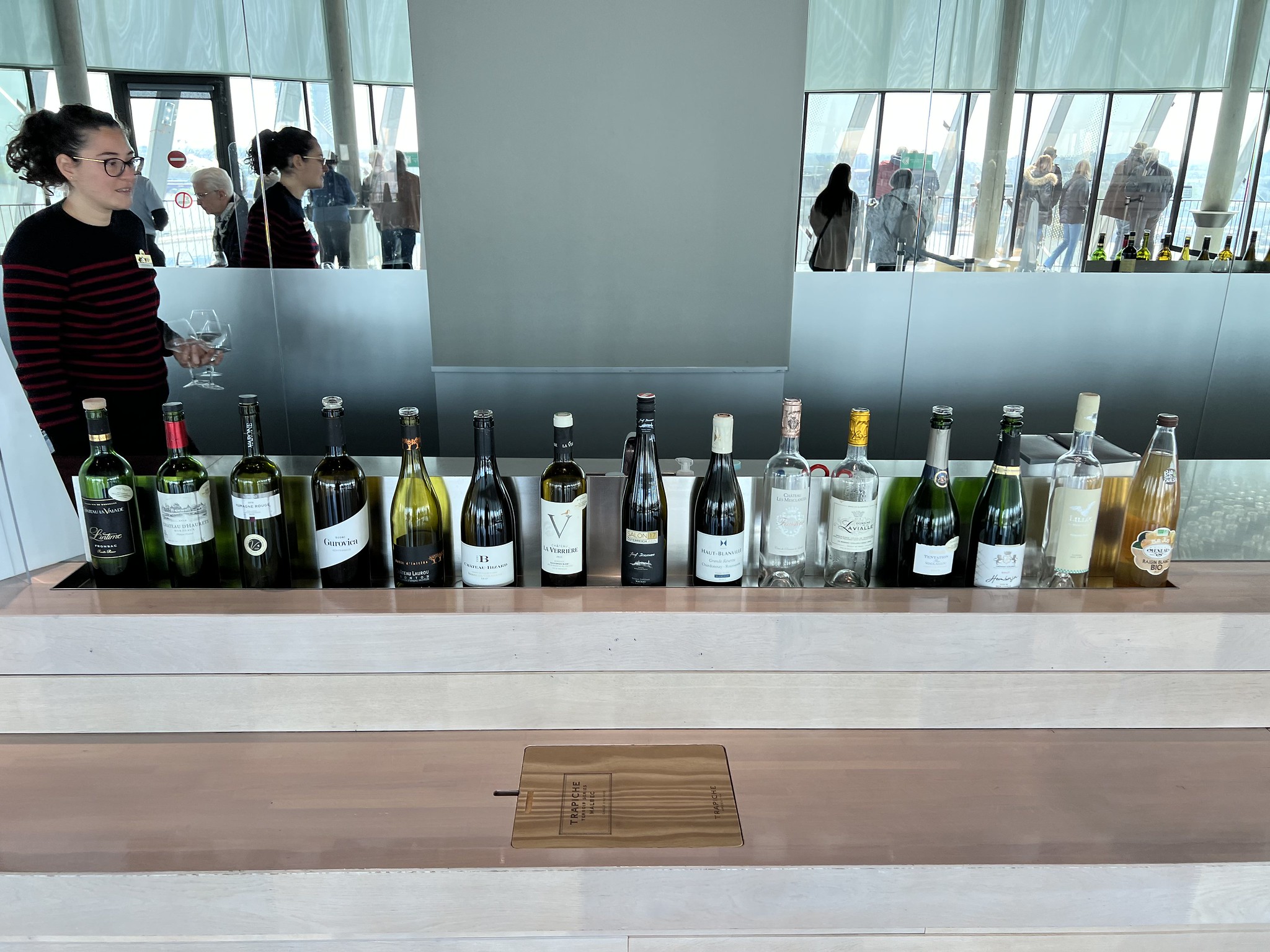 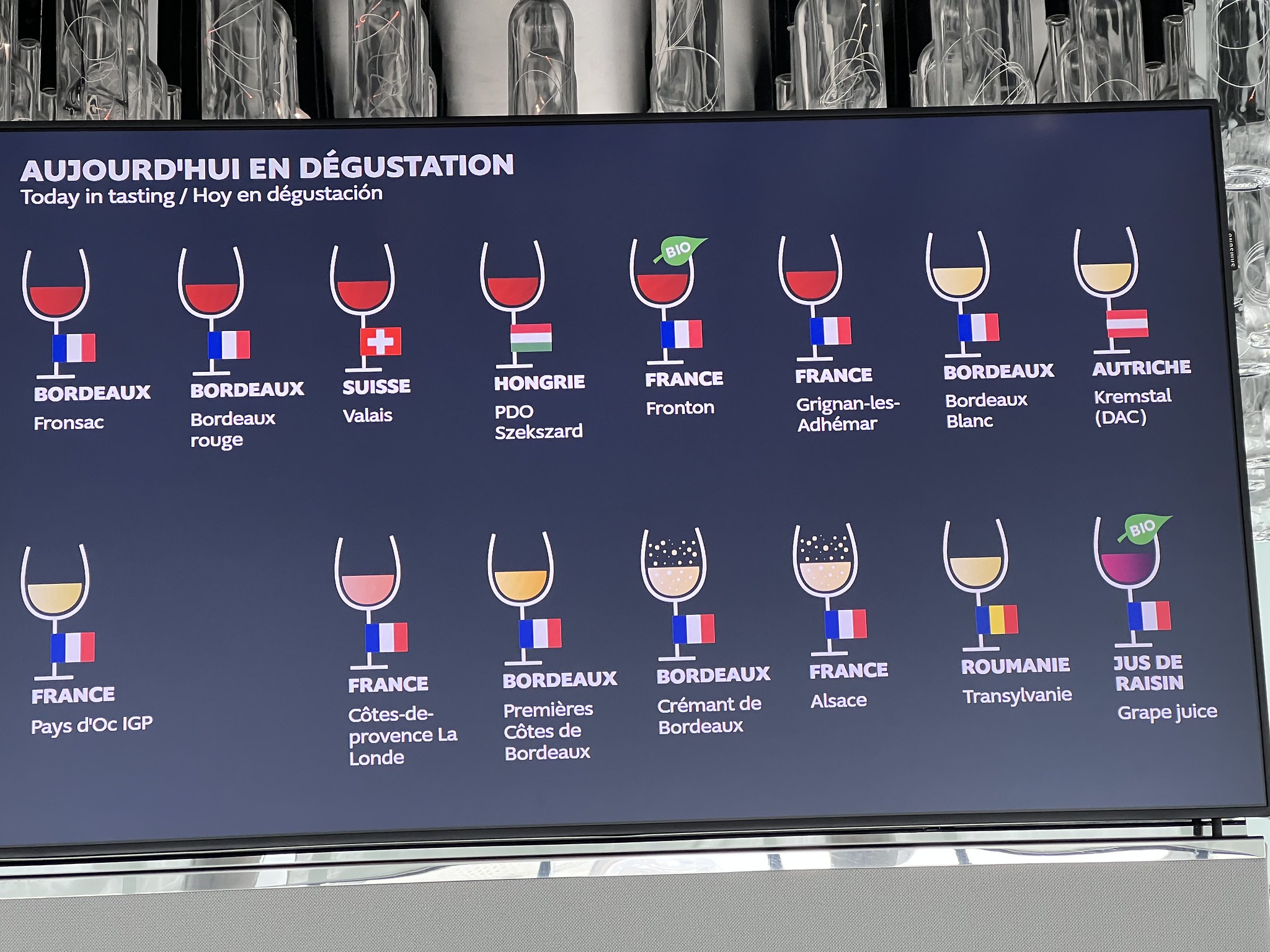 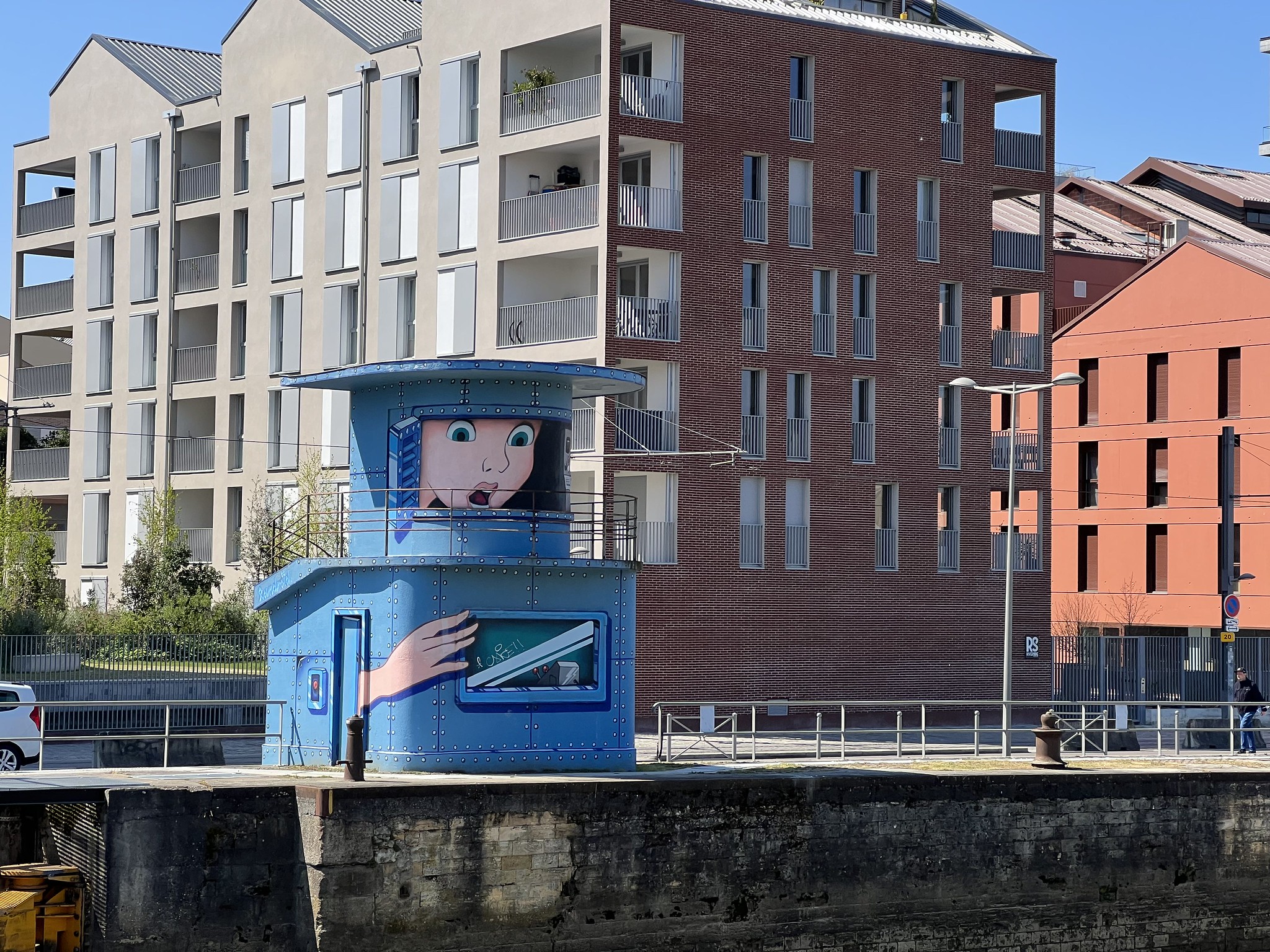 After returning on the tram we had lunch at a small bistro near our hotel but which we had not encountered before. All five of us each had a huge and delicious salad containing duck meat, root vegetables, corn, walnuts, grapes, blue cheese and more. The young woman who served us was cheerful and delightful, telling us that she and her boyfriend were getting married later in the year. 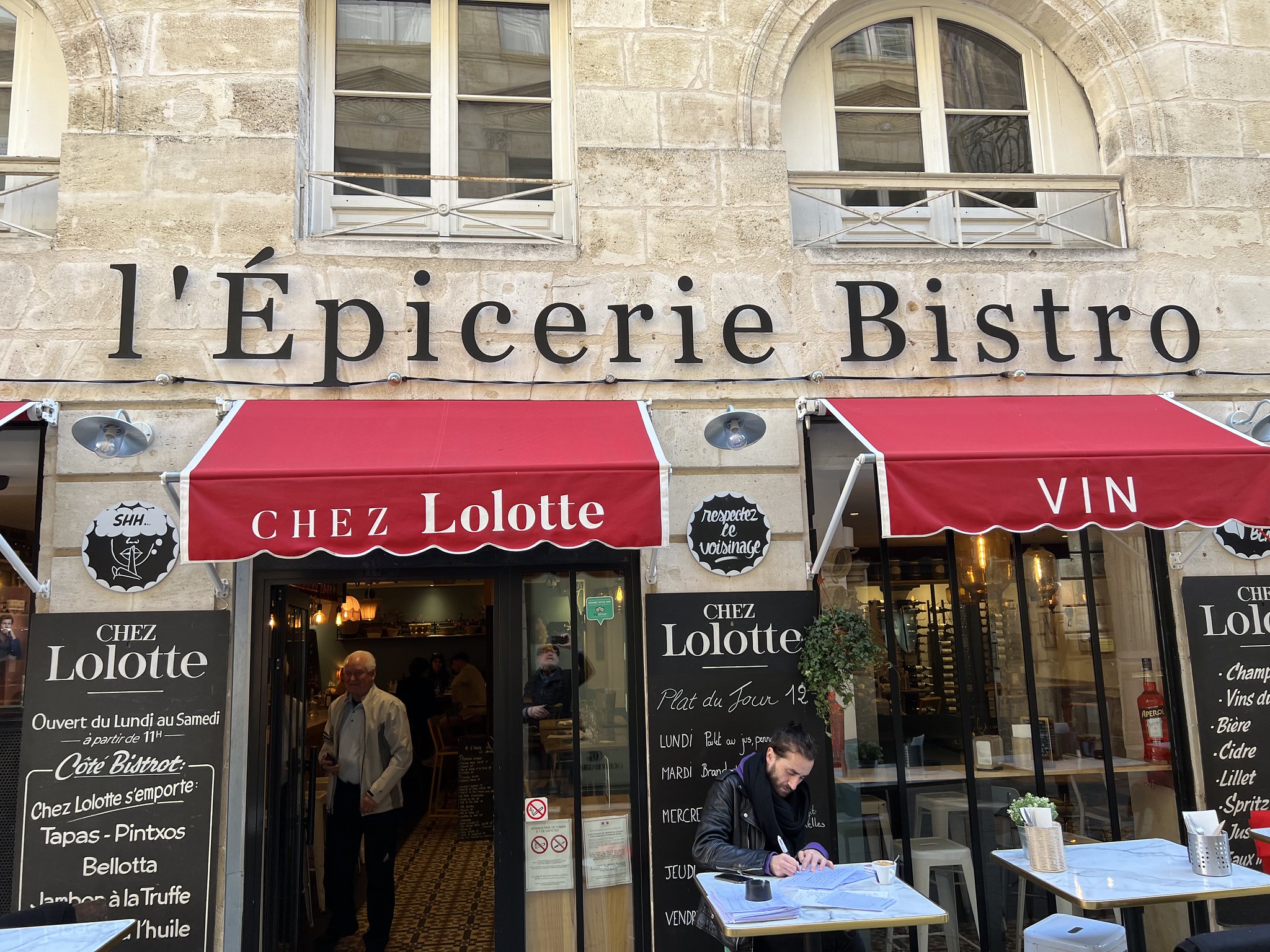 Later in the afternoon, we held a "symposium" in our hotel room with Bud and Gingy, where we shared cheeses we had bought that day and earlier: Roquefort, Comte and Shropshire (not French, but delicious), a baguette I had bought at a sandwich shop (surprisingly good) and, of course, wine, which we had to finish before leaving in the morning.

We left Bordeaux and headed south towards Toulouse. First we stopped in Betbezer D'Armagnac at a goat dairy farm that makes goat cheese. We were introduced to the goats, including a two-day-old-baby, and the two border collies who herd them (very efficiently). Then we were taken in small groups to the "laboratory" where Nathalie ladles goat milk into molds and sets them to age. We sampled one and two-day aged cheeses, and I could tell the difference even then. 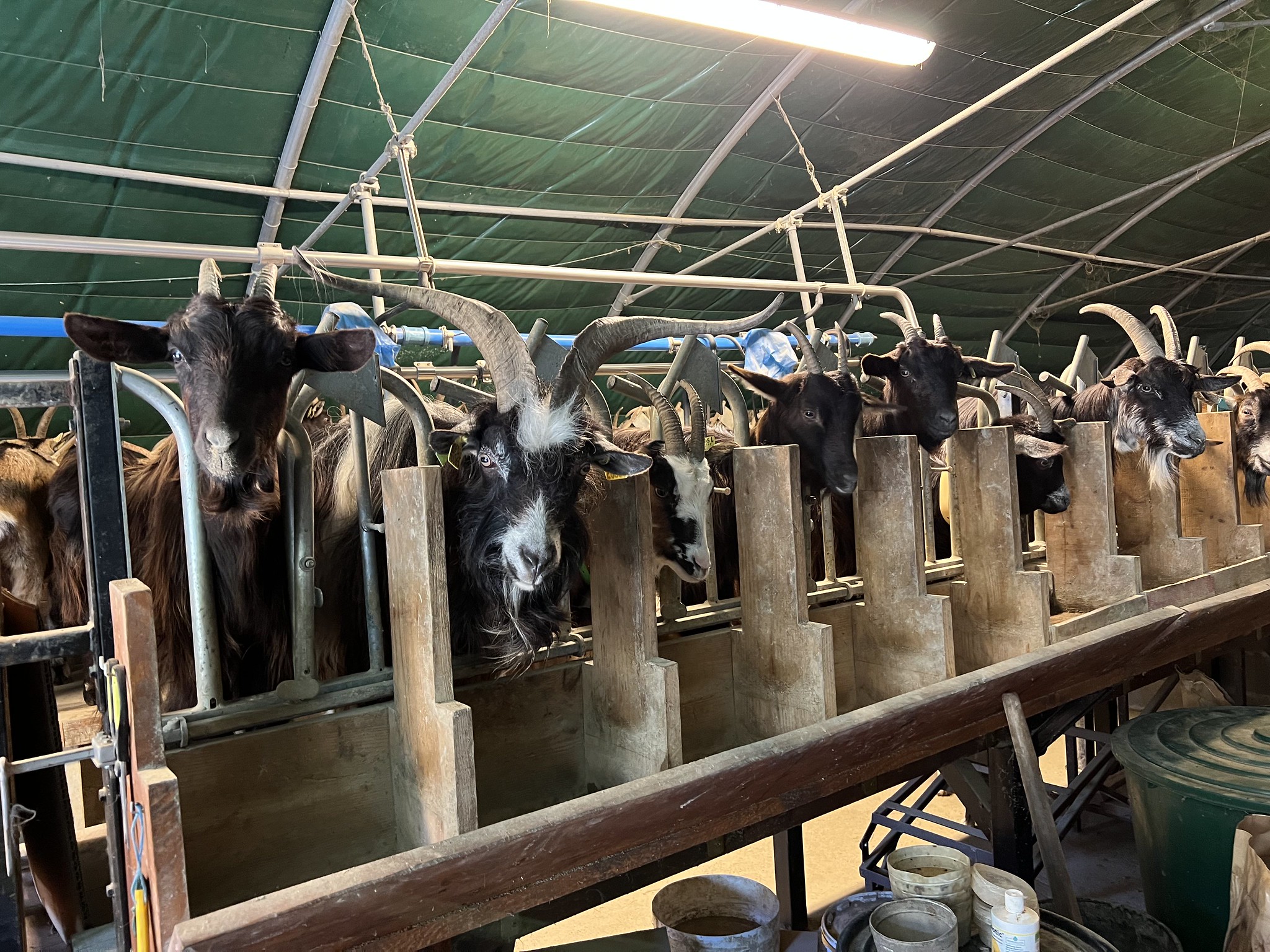 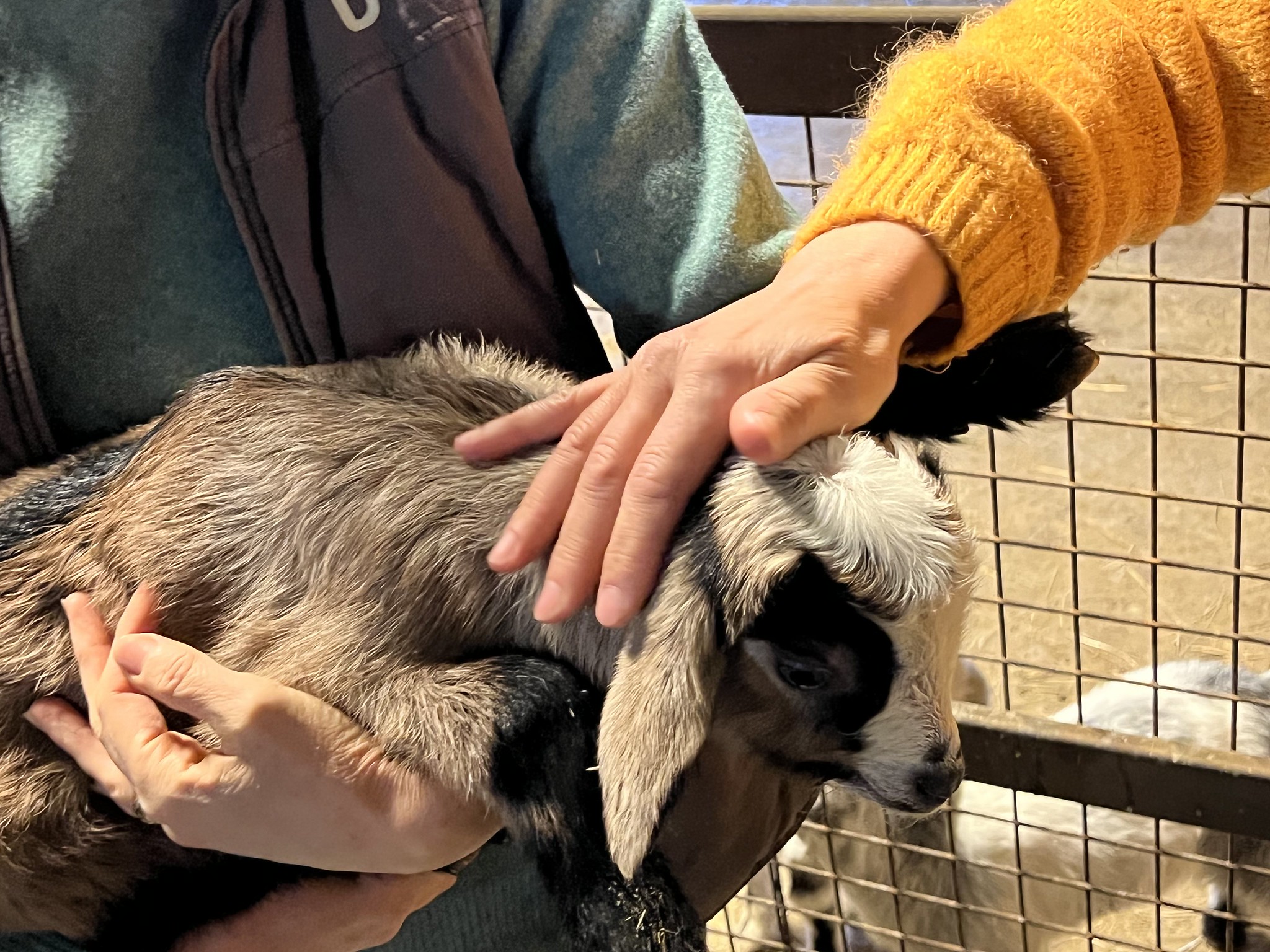 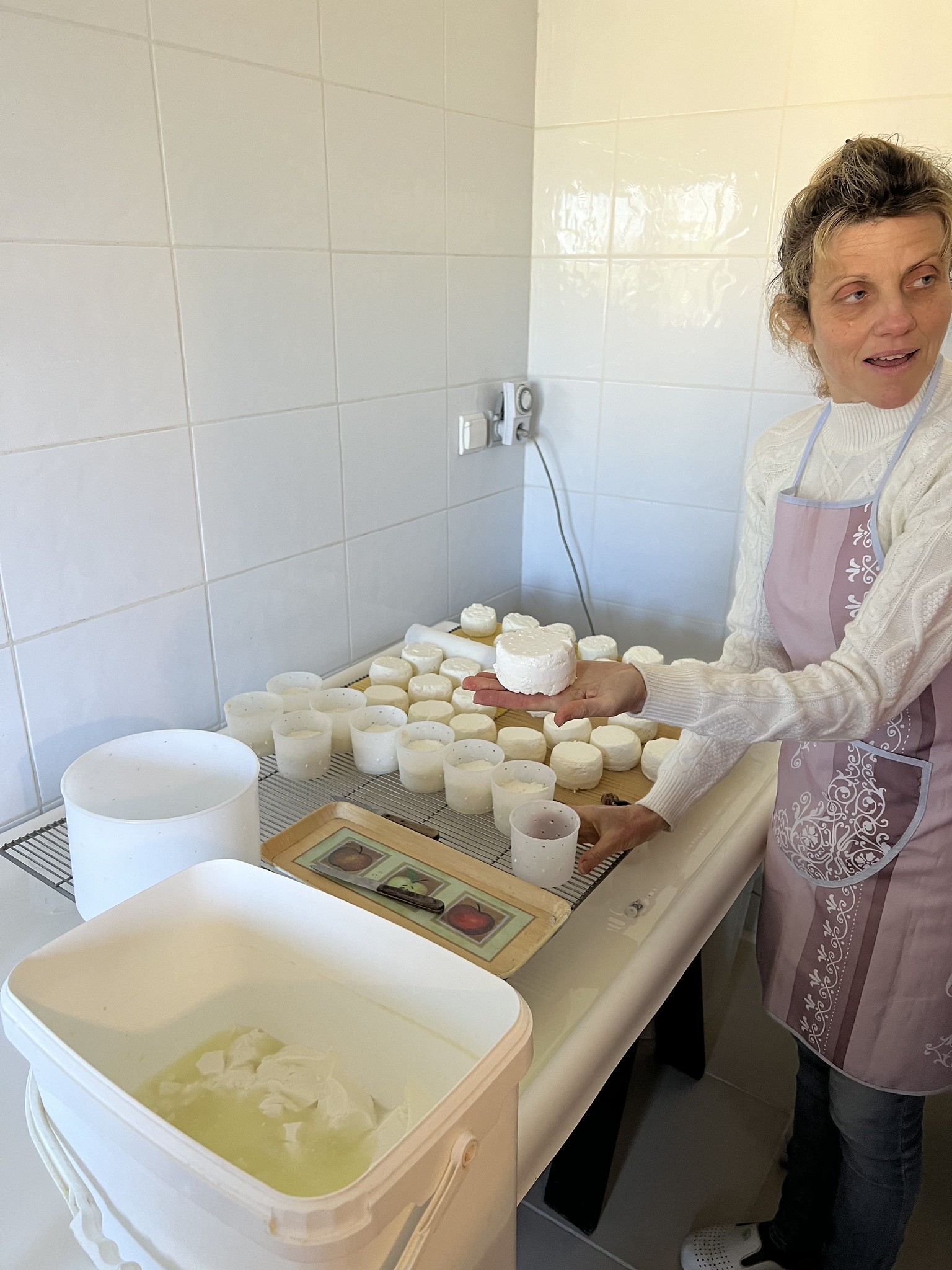 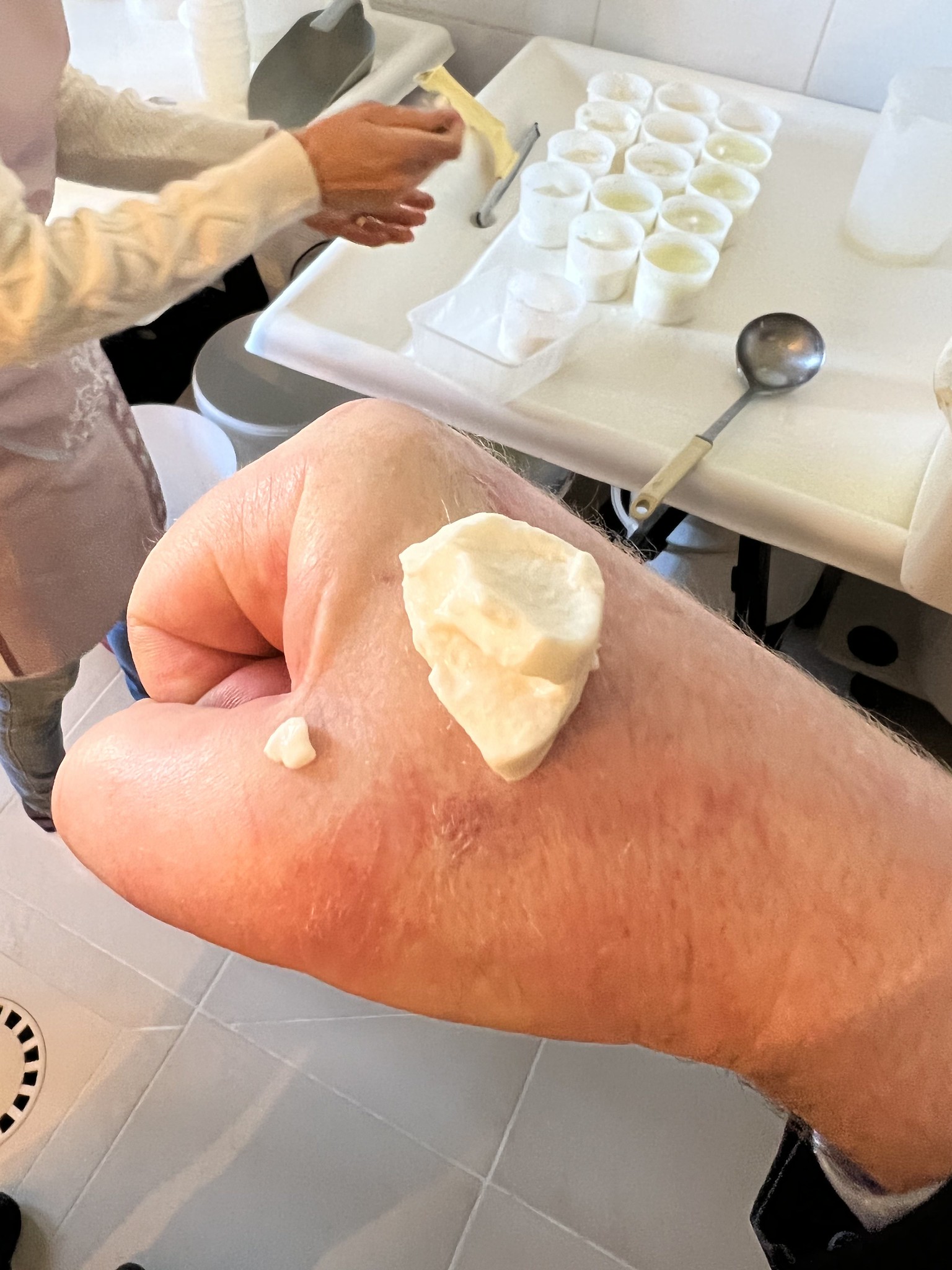 Next we were fed a delicious lunch with all courses featuring goat cheese (of course!), Samples of one, two, three and four-day aged cheese were passed around. Leslie preferred the two-day, I tended to like the three-day better, and they were all subtly different. Even the dessert was a goat cheese mousse with lemon flavoring. Gabriella had brought various bottles of wine, which we all enjoyed. 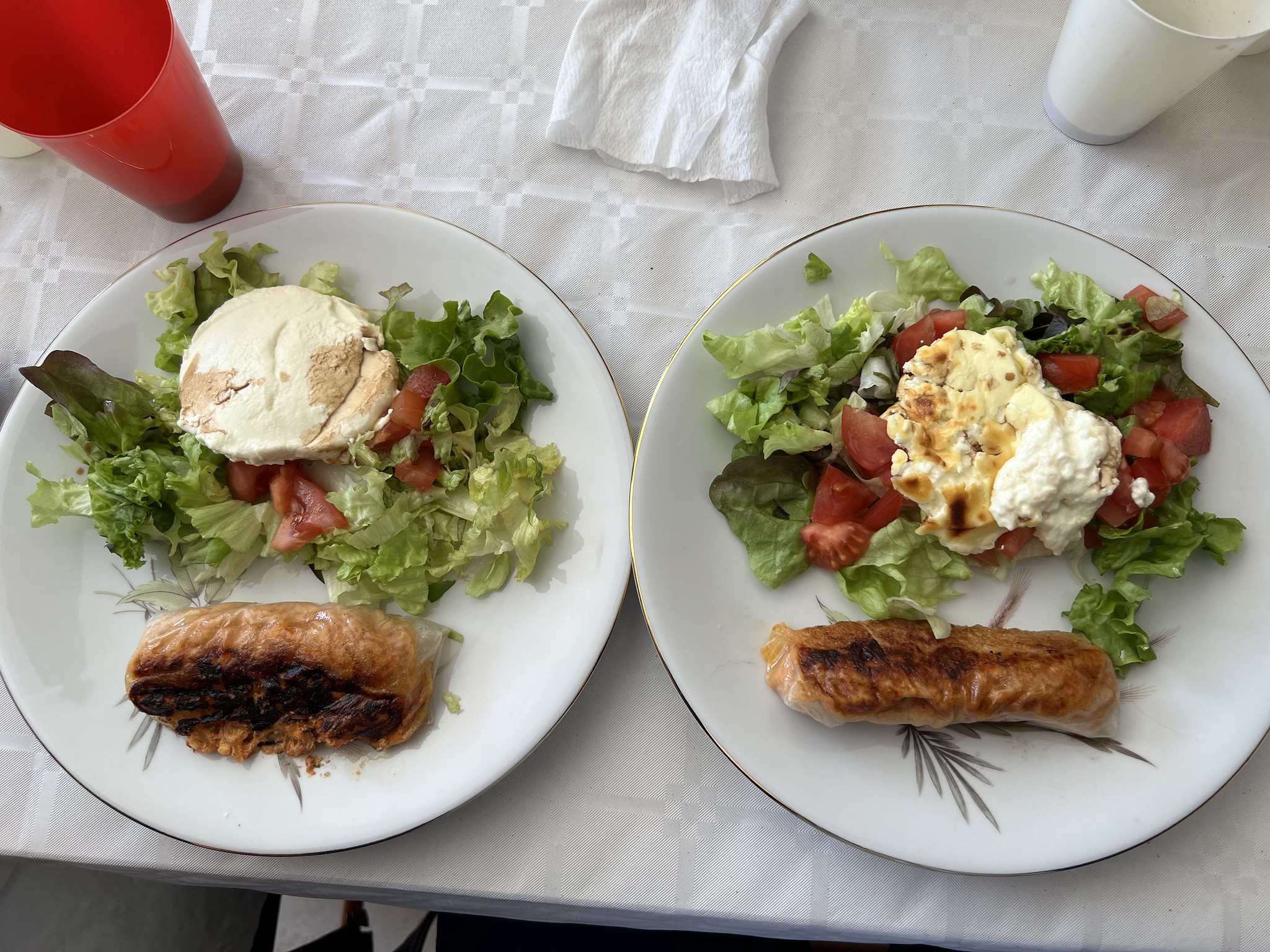 Our next stop was a small brewery in Vielle Soubiran, Lugazaut, where we were the first tourists seen in more than two years. The owner showed his equipment and then we sampled each of the seven types of beer he makes (actually six beers and a mead.) So far in France, all I had seen for beer were the lager and Pilsner styles. He made those, plus an amber ale and an "American Pale Ale", none of which were to my taste. But he also had a smoked Porter, which had won an award and was delightful. 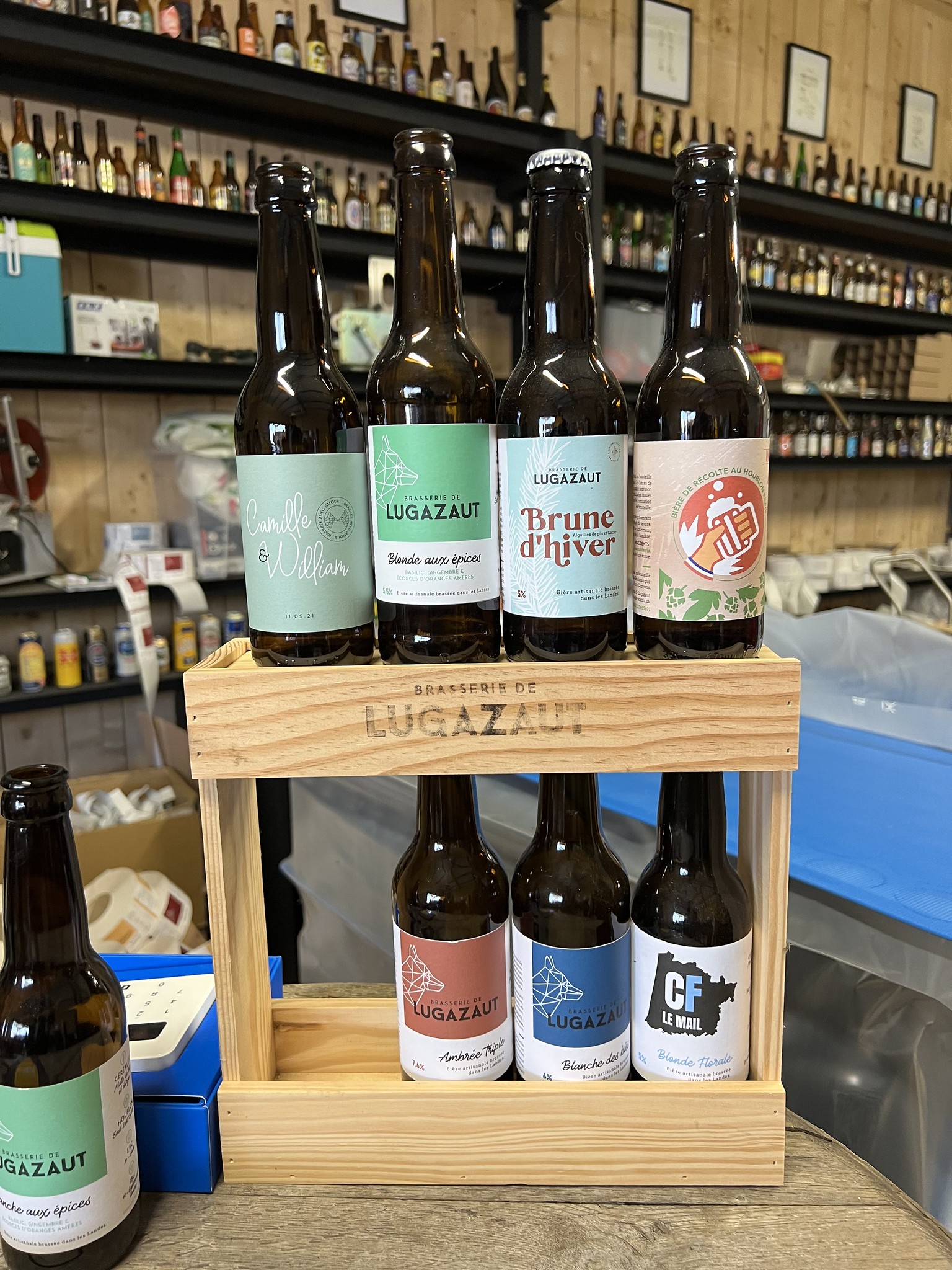 Then it was on to Toulouse, where we would be staying for the next four nights. The bus driver wasn't able to get to the hotel entrance due to the various blocked off passages (retractable bollards often blocked the way - one could ask permission to get them lowered, but no matter what we did we couldn't get close.) Eventually we stopped and unloaded on the other side of a square from the hotel, dragged our luggage across the square, and checked in.

Grand Hotel de L'Opera is an even older hotel than the InterContinental. There was a single, small elevator crammed into a corner, or one could take (once) elegant curved but creaky stairs. Our room seemed nice at first, but we soon discovered that the ventilation system was still in heating mode for the whole hotel even though the days were warm. The rooms had a ceiling fan, which would have been fine, but it was "for decoration only" and non-functional. While there were seemingly a dozen or more light switches, you couldn't turn on or off individual lights.

We had just a few minutes to get ready for a group dinner at the nearby Le Bibent ("The Drink"), a very frou-frou place. We were served a multi-course dinner that started with an amuse-bouche of a shrimp in a butter sauce, and an endless supply of delightful crusty bread (no bread plates or butter - most of us soaked the bread in the shrimp's sauce.) Next was an appetizer of salmon (smoked?) with a tubular extrusion of a white mousse (we couldn't identify what it was made from) and bits of crunchy seaweed. For the entree, most of us had sea bass, served over Israeli couscous and a brown sauce - very tasty. Some others had chicken with mashed potato. Last there was an elegant dessert with pastry dough layered with a filling like you'd find in a cannoli. It was a lot of food. We were served only one glass of wine, but it was a good one. 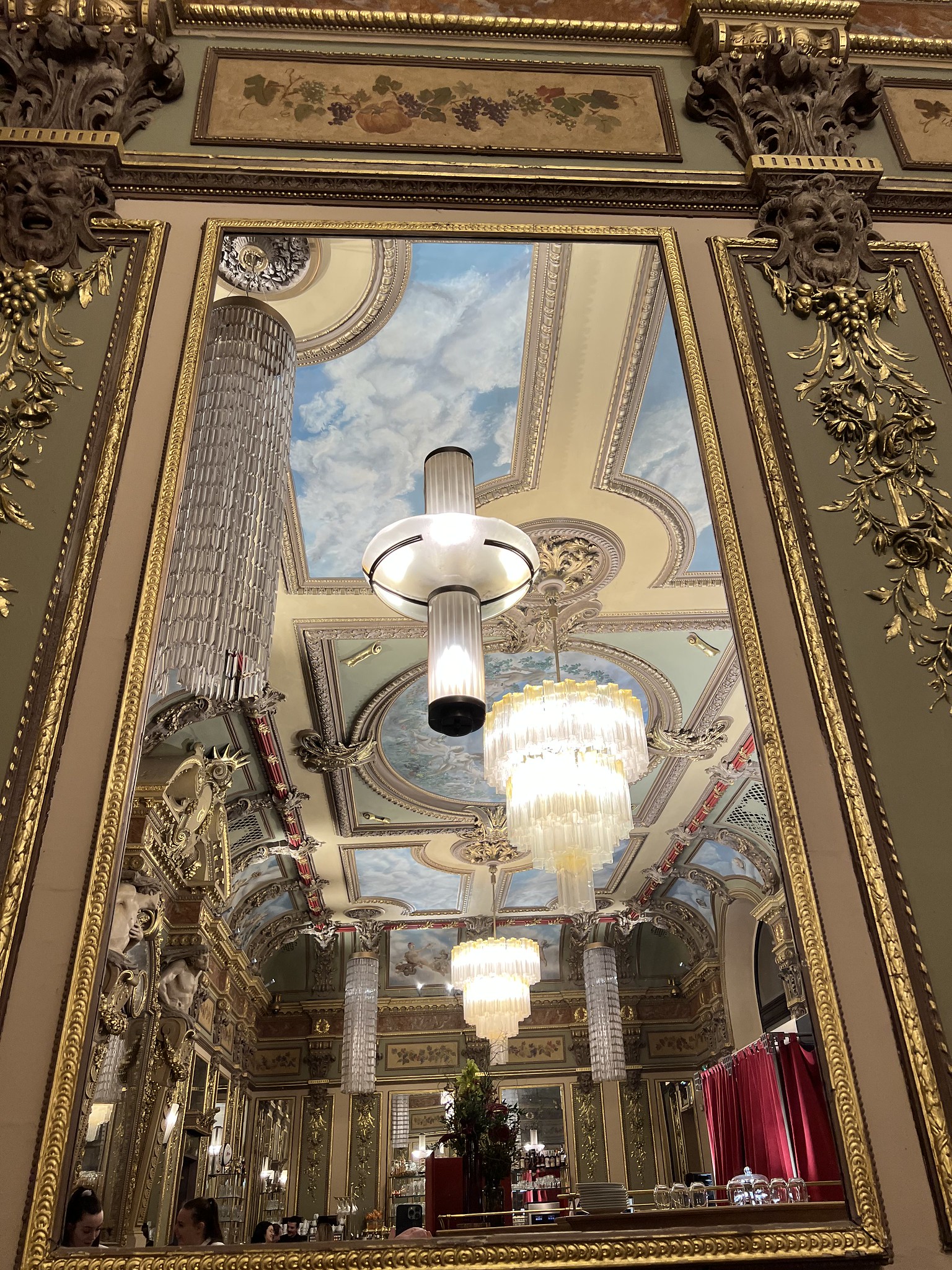