We checked out of the Toulouse hotel and headed south into Basque country. Our first stop was in Biran, to visit La ferme du Hitton, where donkey milk is made into soap, facial creams (claimed to have skin tightening effects) and more. At first we were greeted by Pipa, a Jack Russell Terrier, who was determined that each and every one of us would take her tennis ball and throw it. She'd run after it, sometimes snatching it out of the air, then trot back to drop it at the feet of her next victim. Pipa would have us doing this all day if she had her way. 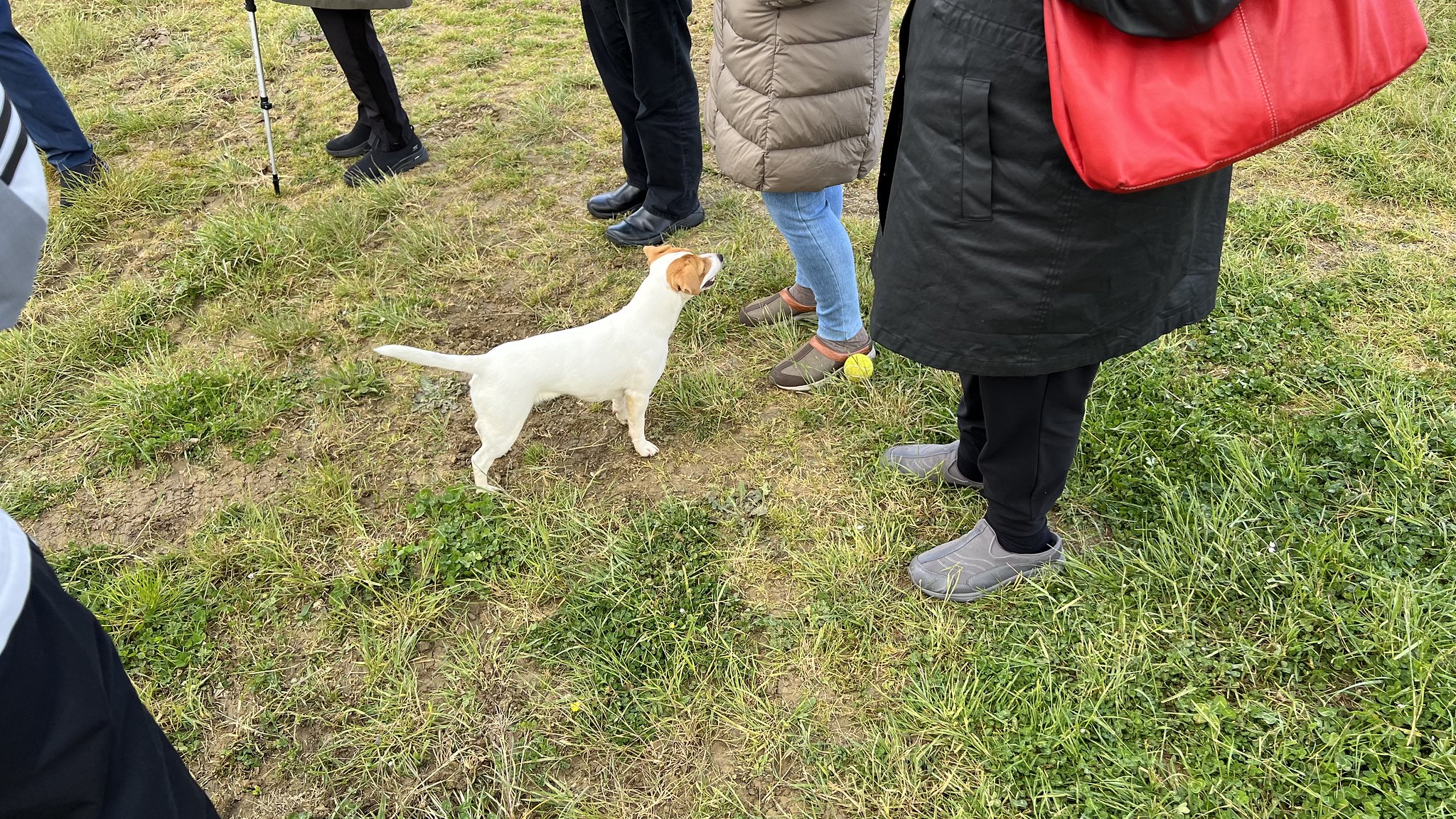 Cecile and her husband raise about 30 donkeys on the beautiful, rolling land that isn't usable for non-animal farming due to French regulations. They also have a few cows ("as pets", Cecile says.) We were let into the field and the donkeys (all mares in this field) clearly enjoyed meeting people and being skritched as one would a cat or dog. We were told that only mistreated donkeys bite or kick, but to watch their ears for signs that they had "enough", as we have learned to do with cats. 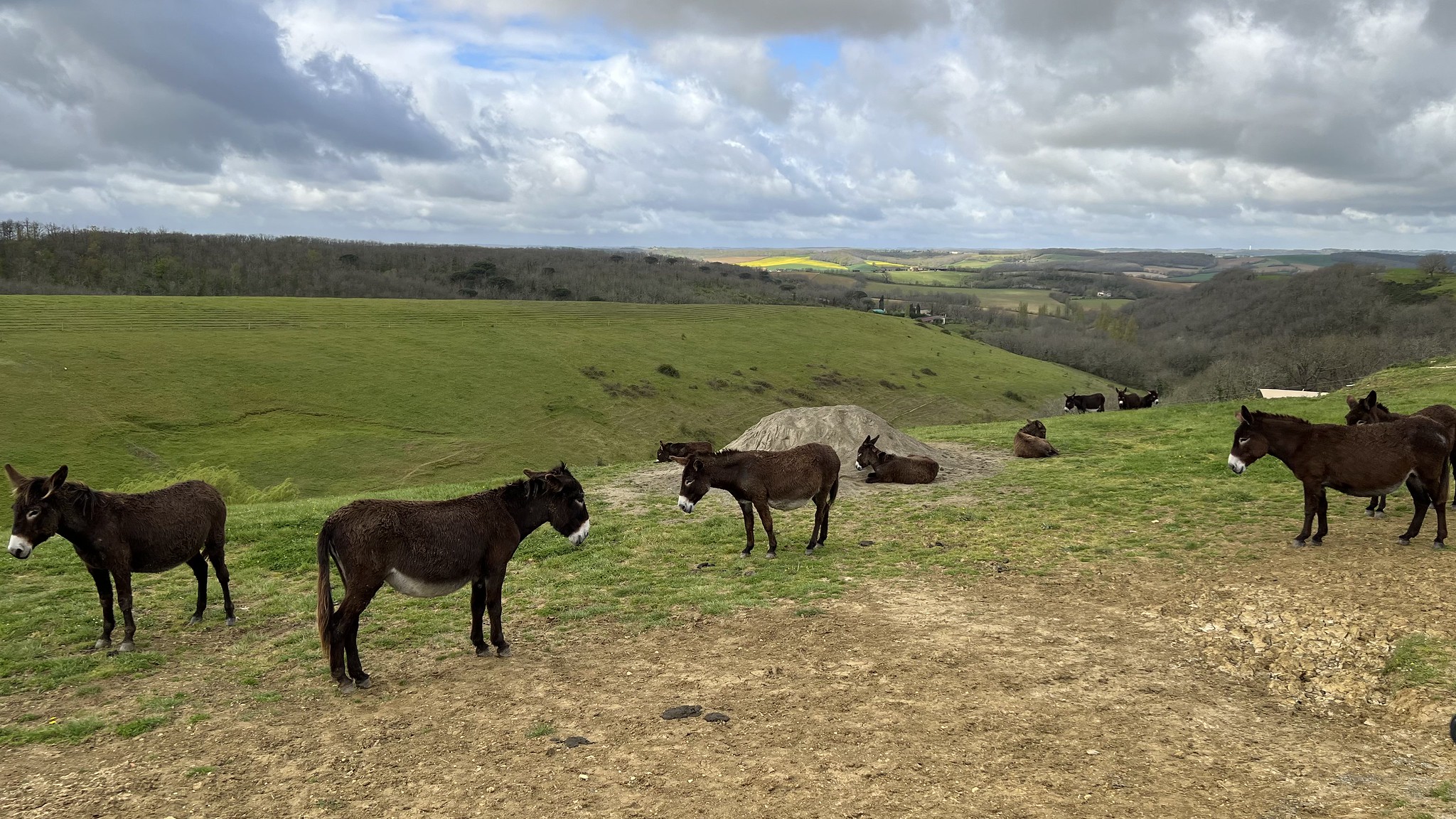 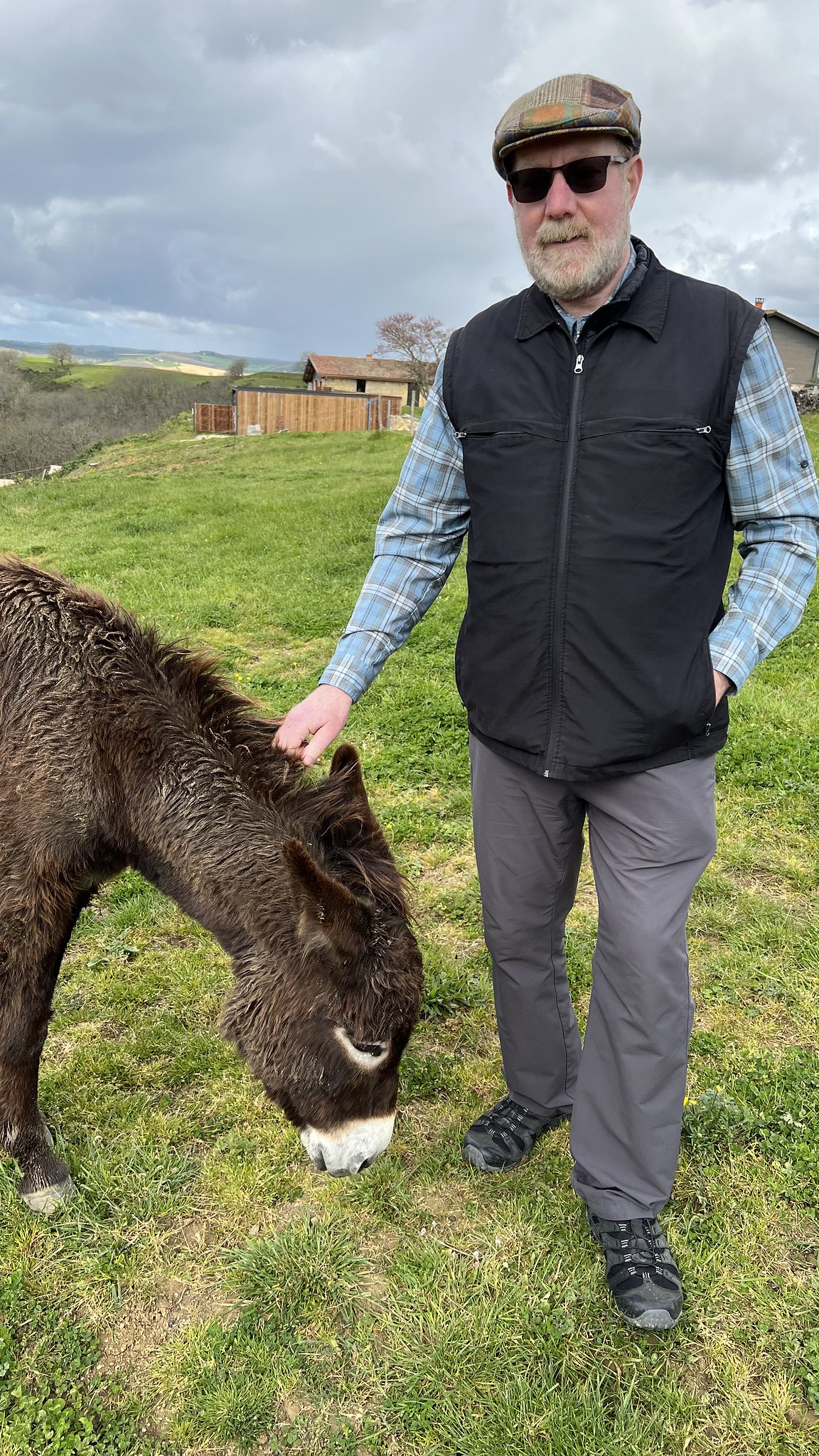 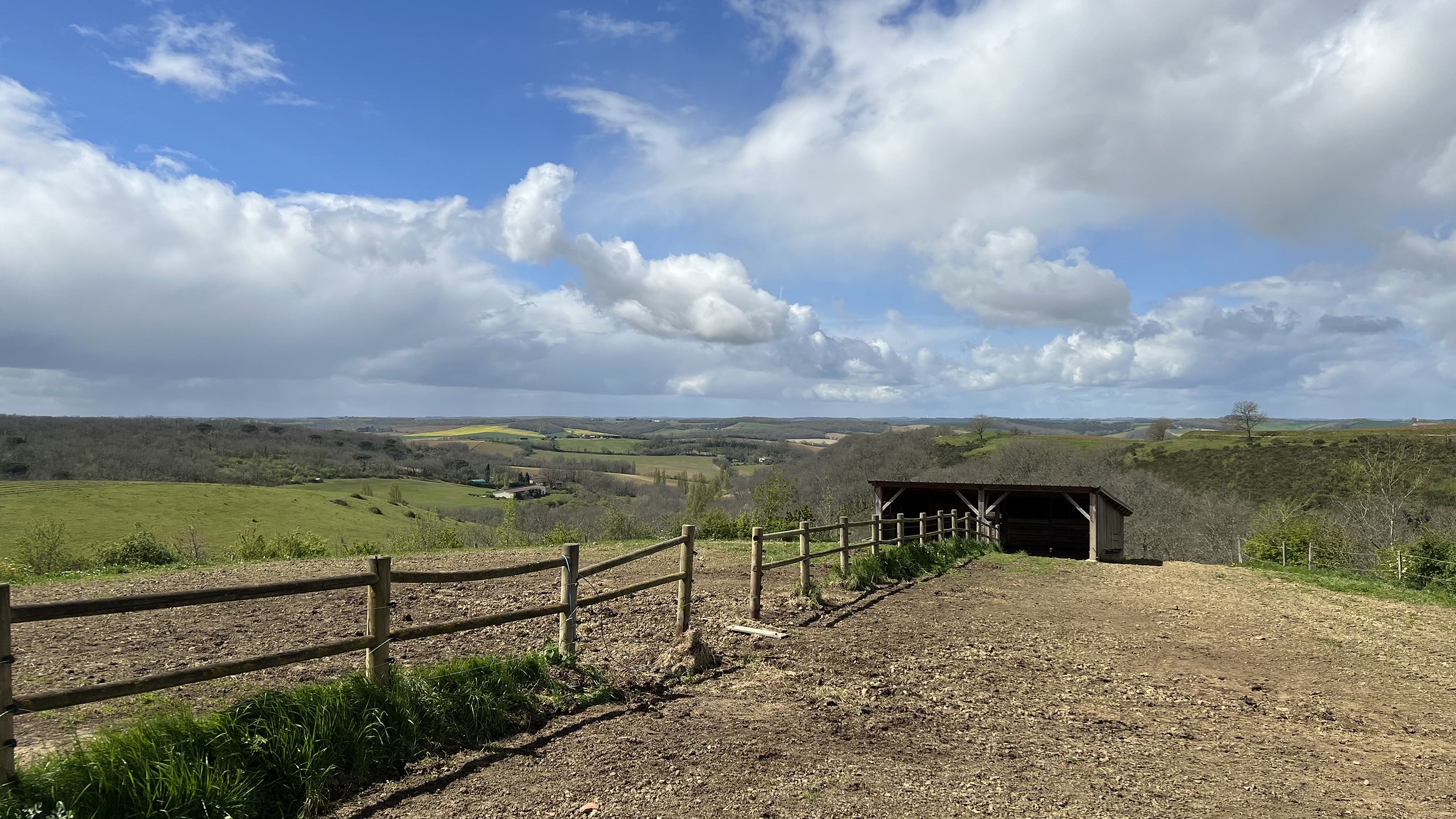 After this we were served a delicious charcuterie lunch, with a presentation so lovely it seemed a shame to disturb it. The semolina bread was out-of-this-world - I have to see if I can make some that comes even close. There was, of course, further ball play with Pipa. 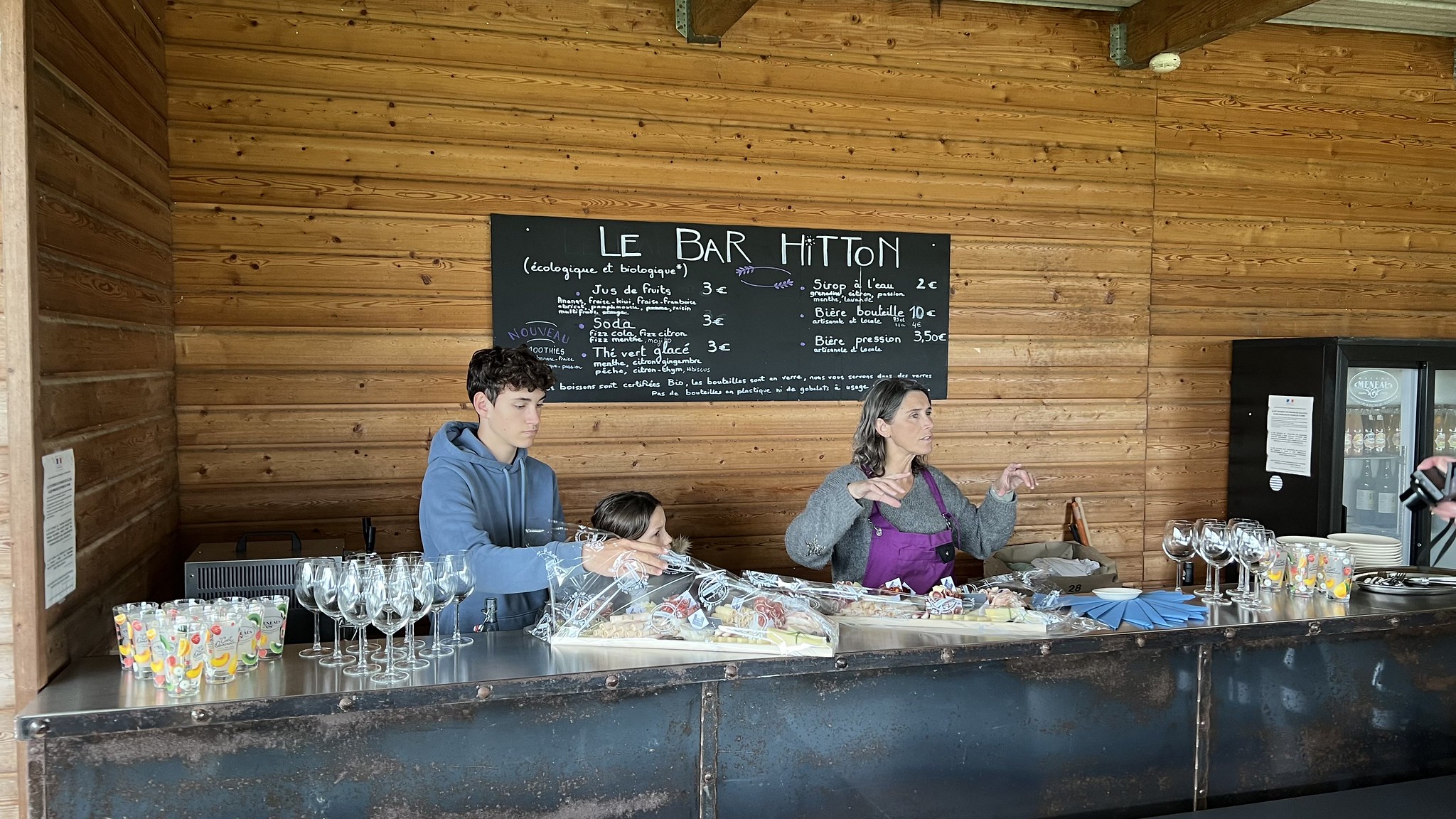 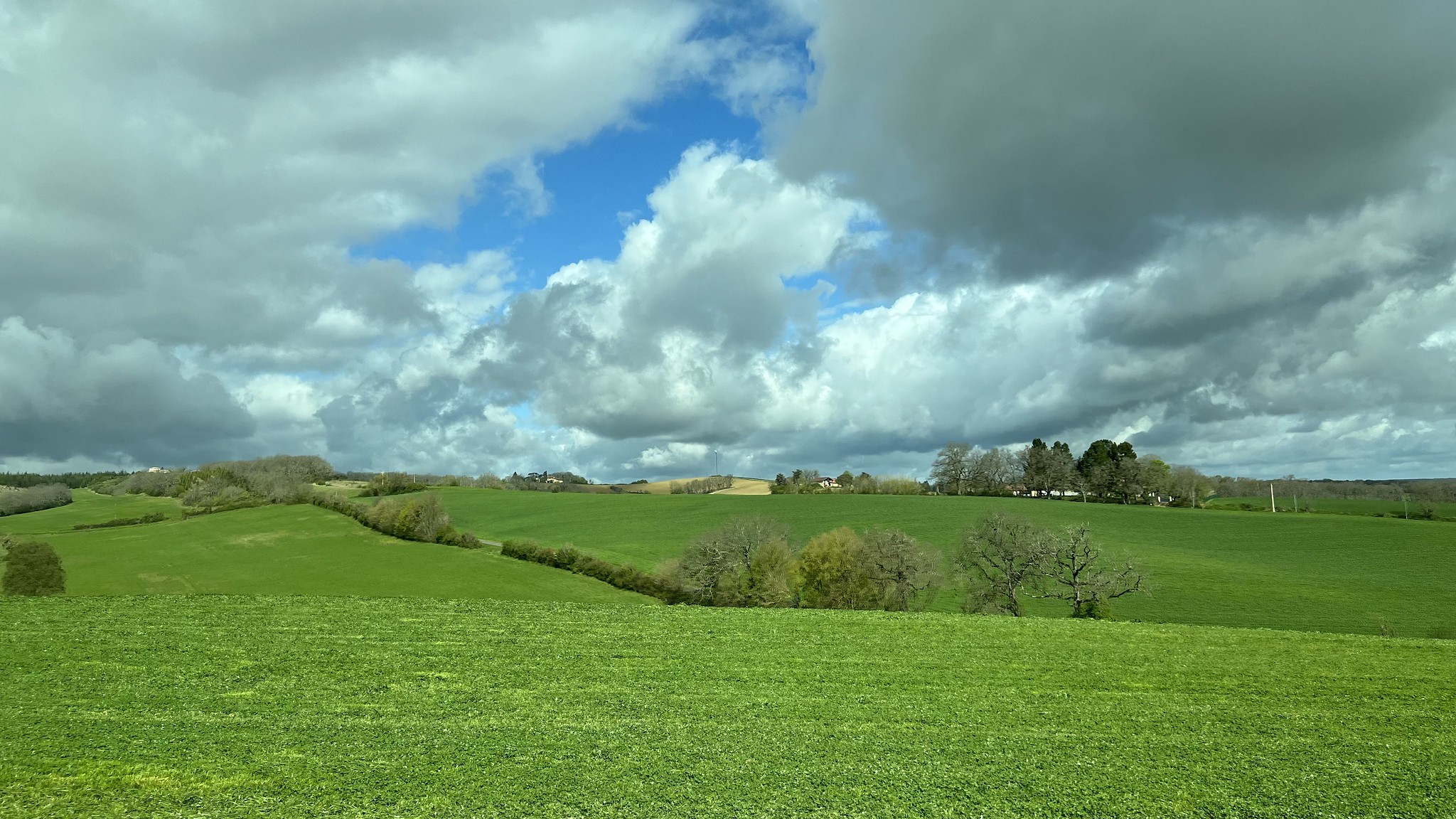 After leaving Biran, we stopped in Bayonne for a city walk, followed by dinner at a wine bar. Here, as in some other cities we had visited, there were many, many chocolate shops showing off elaborate sculptures and figures made of chocolate. 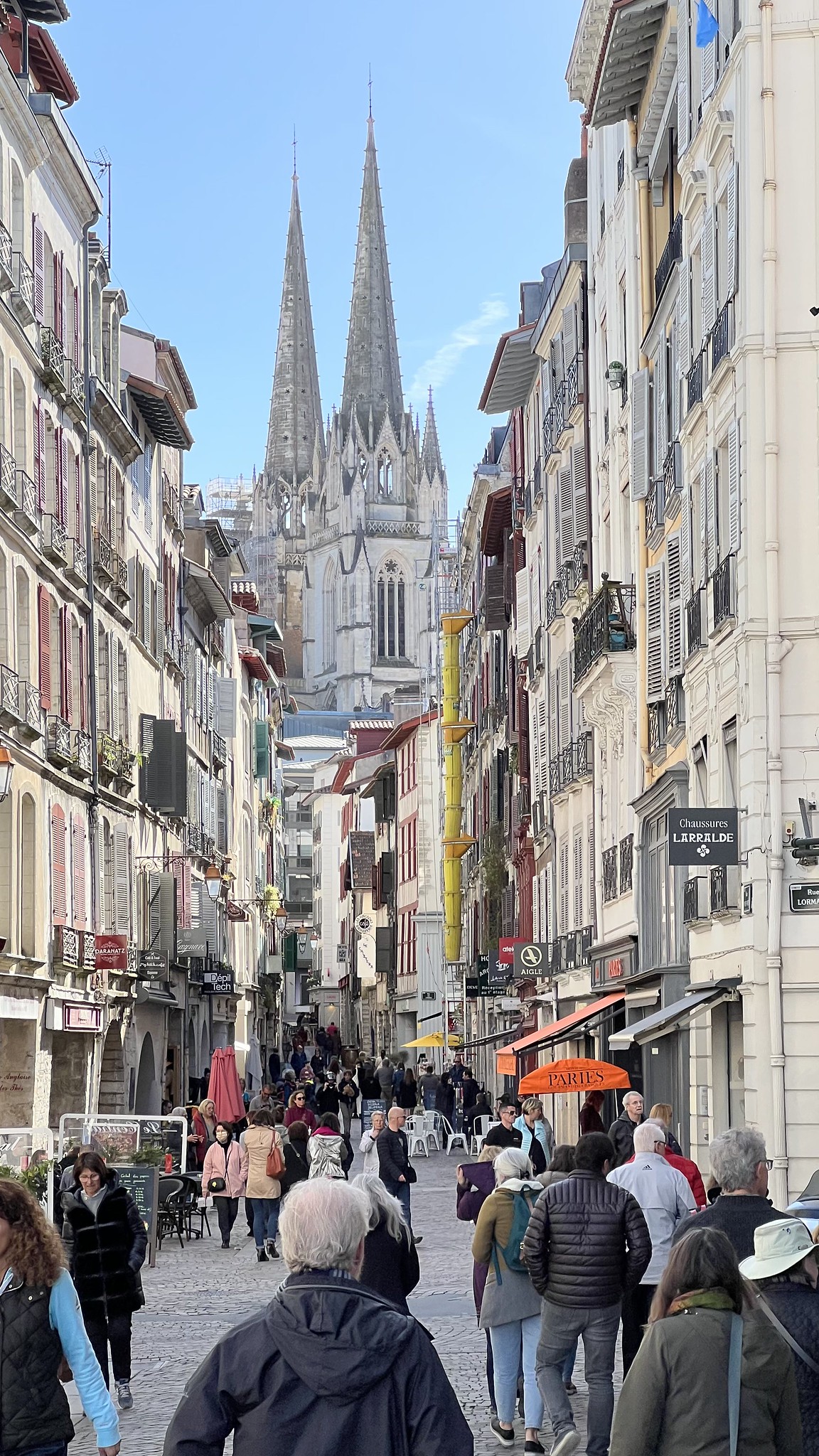 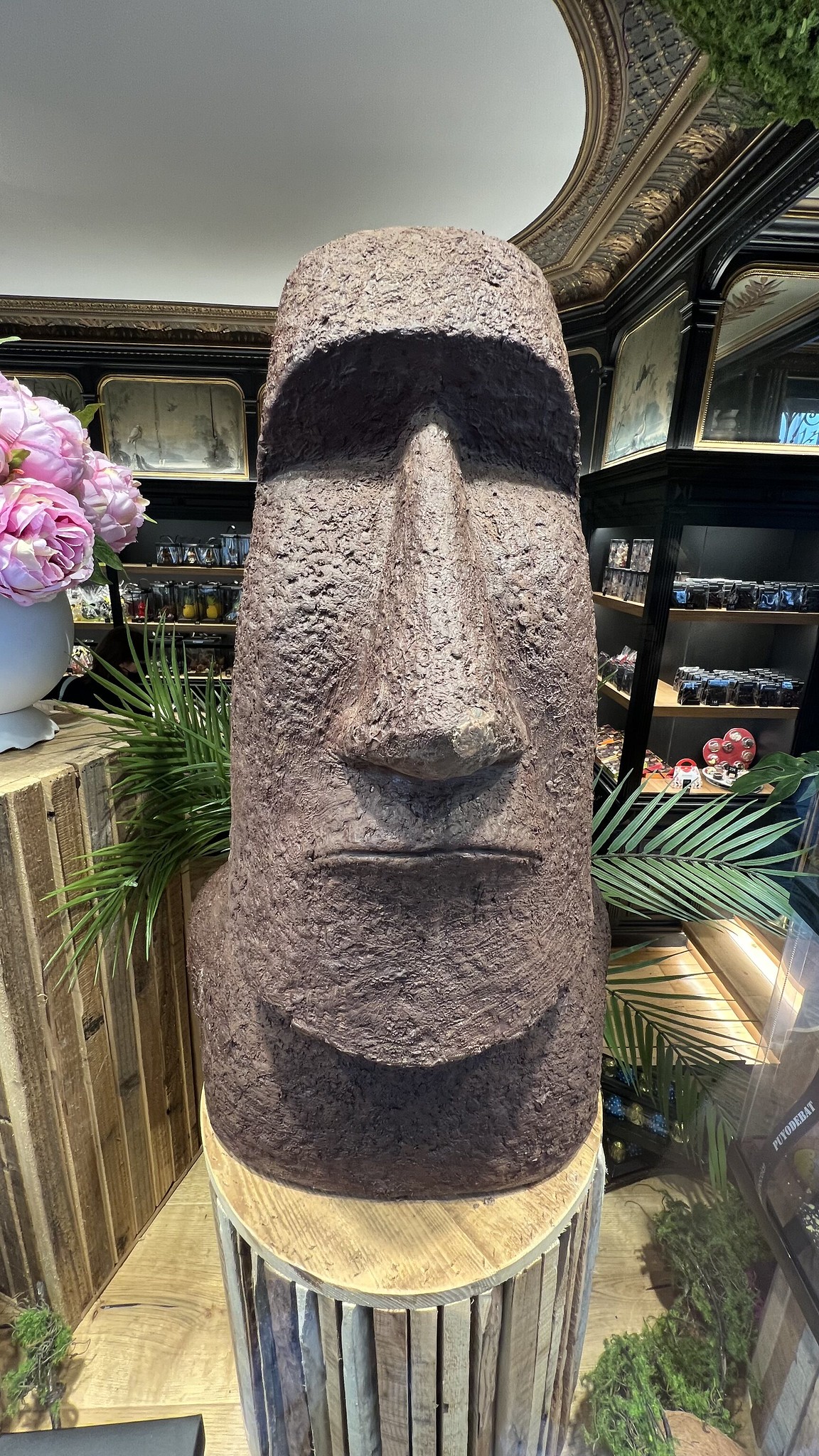 We then headed to our final hotel in the tiny Basque town of Sare. The hotel, run by a brother and sister, was obviously an old building but nicely appointed. Unfortunately, due to some construction that had gone on earlier, some of the rooms, including ours, had the water shut off. This was quickly corrected (plumbers had neglected to turn the shutoffs back on - these were concealed in the back of the room's closet), and everything was fine after that.

We headed to the Pyrenees region, first stopping in a pleasant town named Saint Jean Pied de Port. As we wandered through the town, we stopped by a seller of meats and sausages who put on a good act for the American tourists. We did buy some of his sausage, and it was very good. It was Palm Sunday, and I happened across a procession of villagers singing hymns on their way to church. 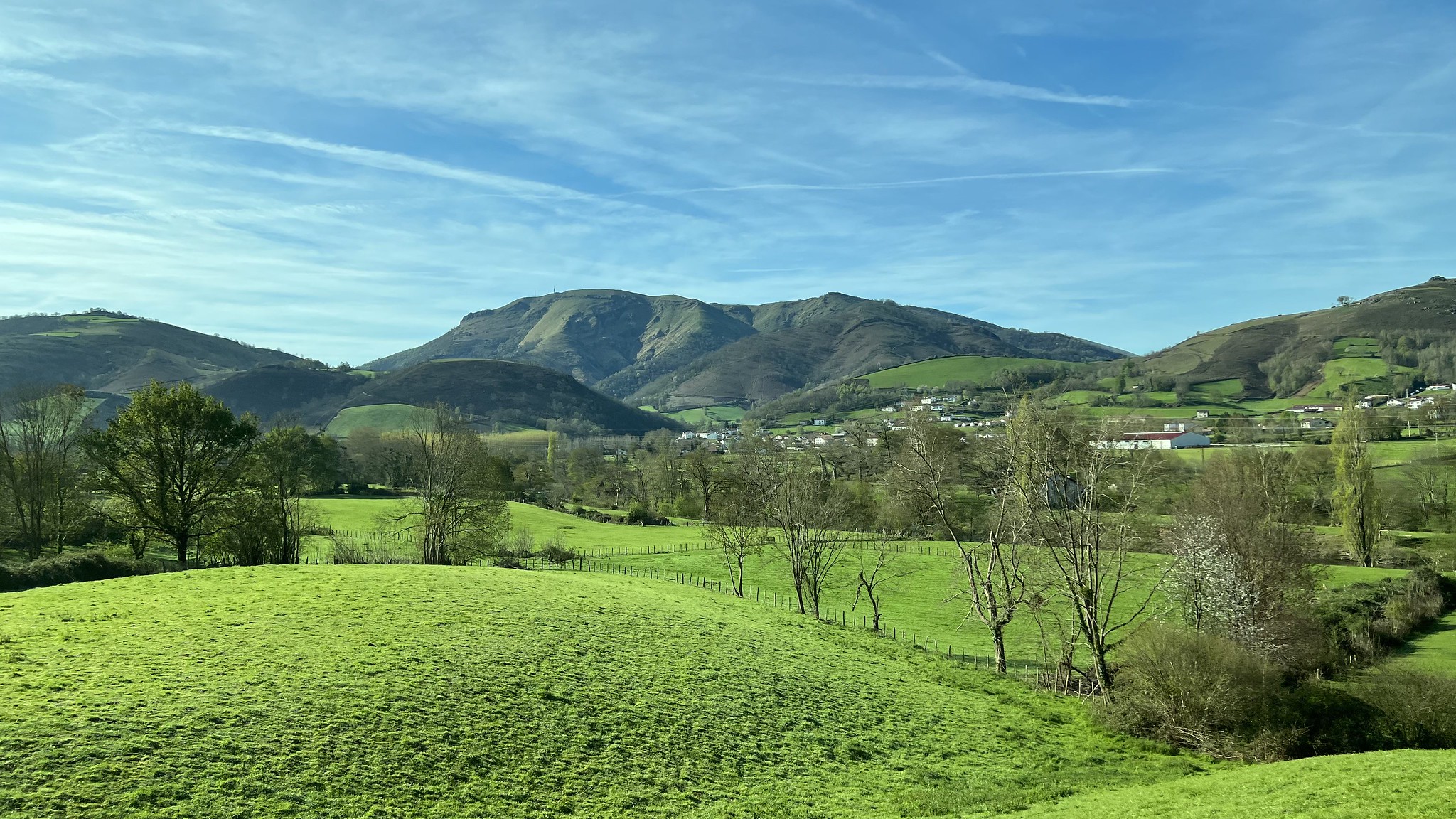 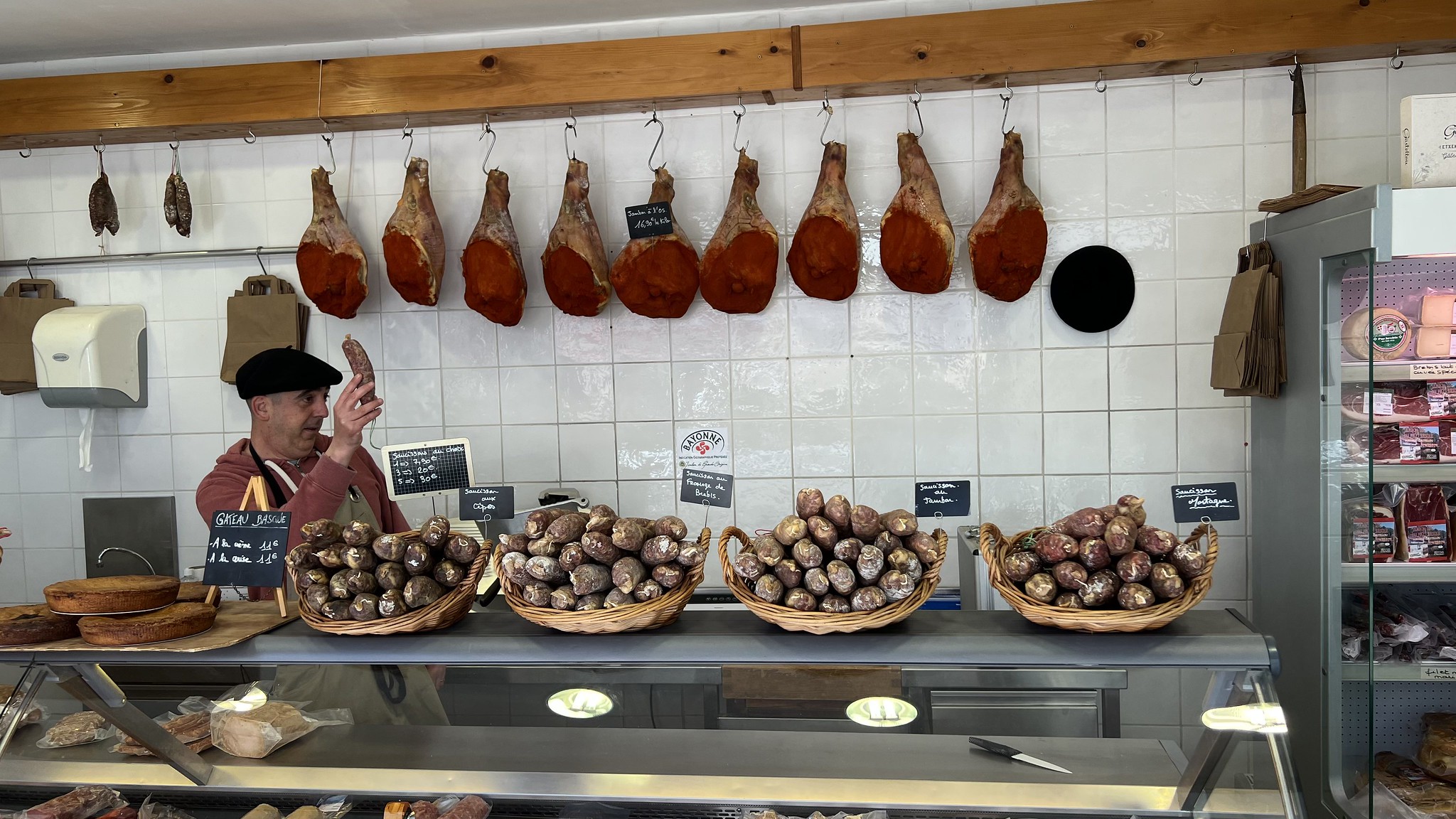 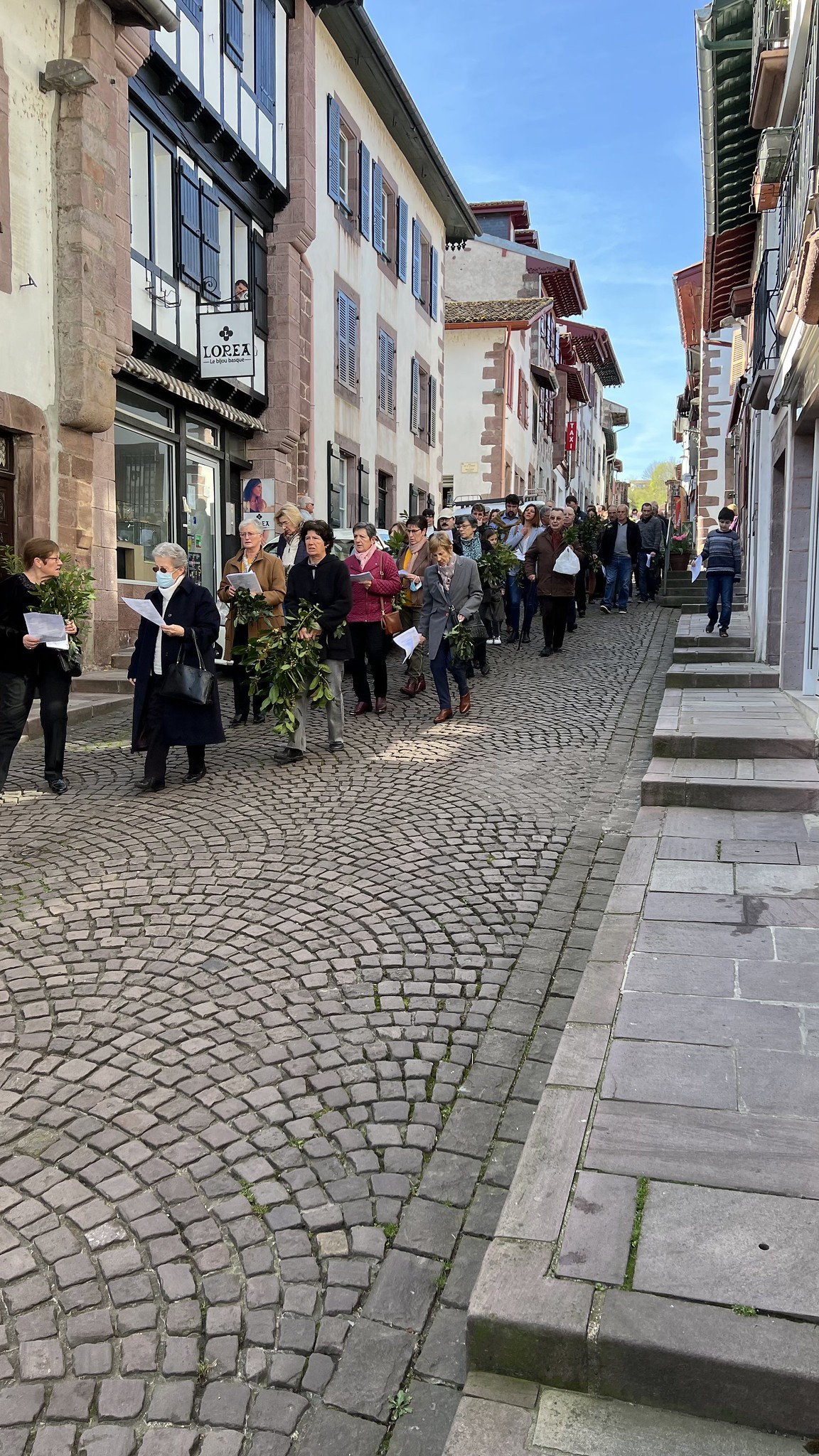 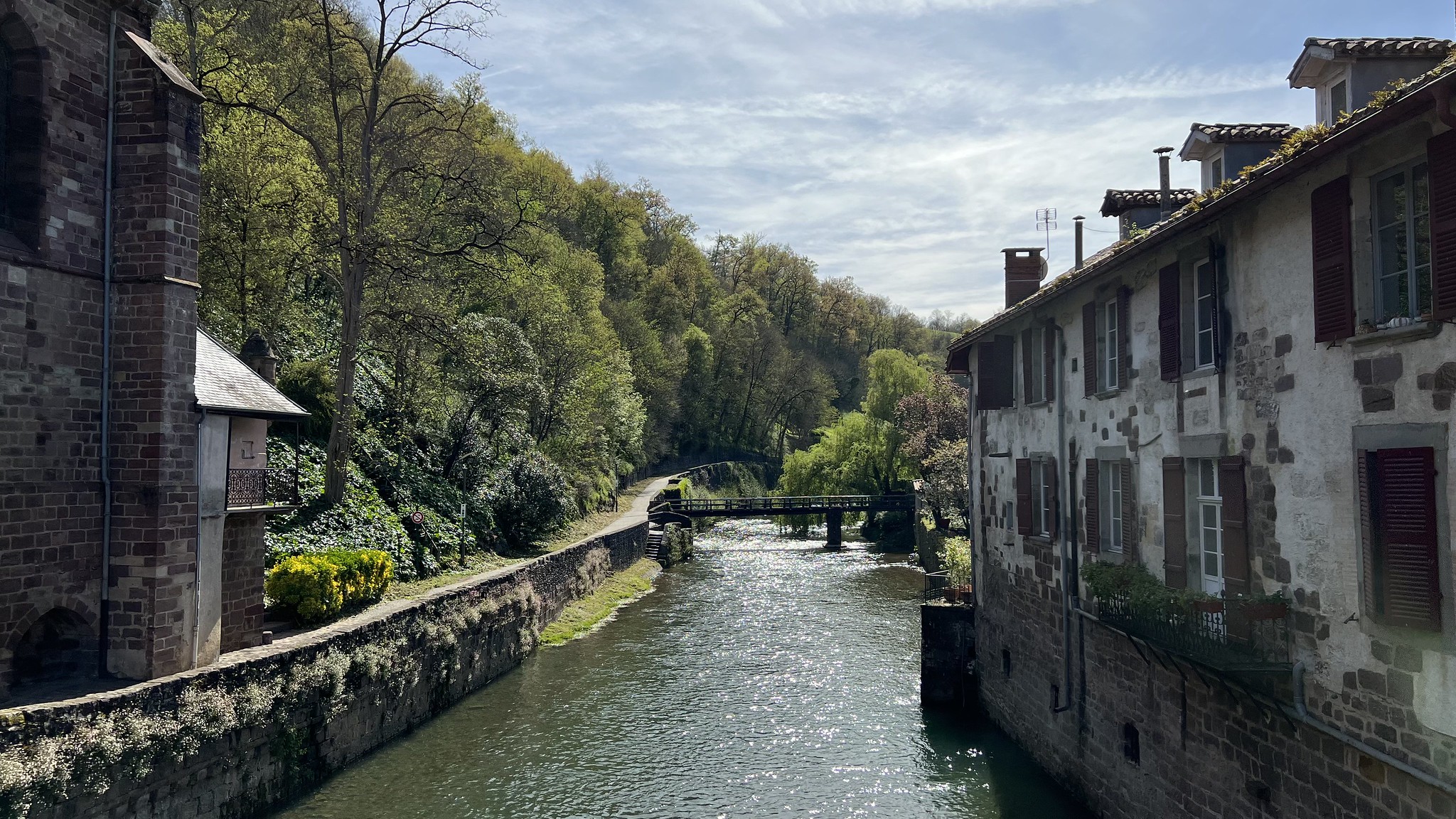 Next we visited a place that made "Ossau Iraty" cheese. It was far more industrial than the other cheesemakers we had visited. After a tour through the glass-lined corridors, we were served lunch. 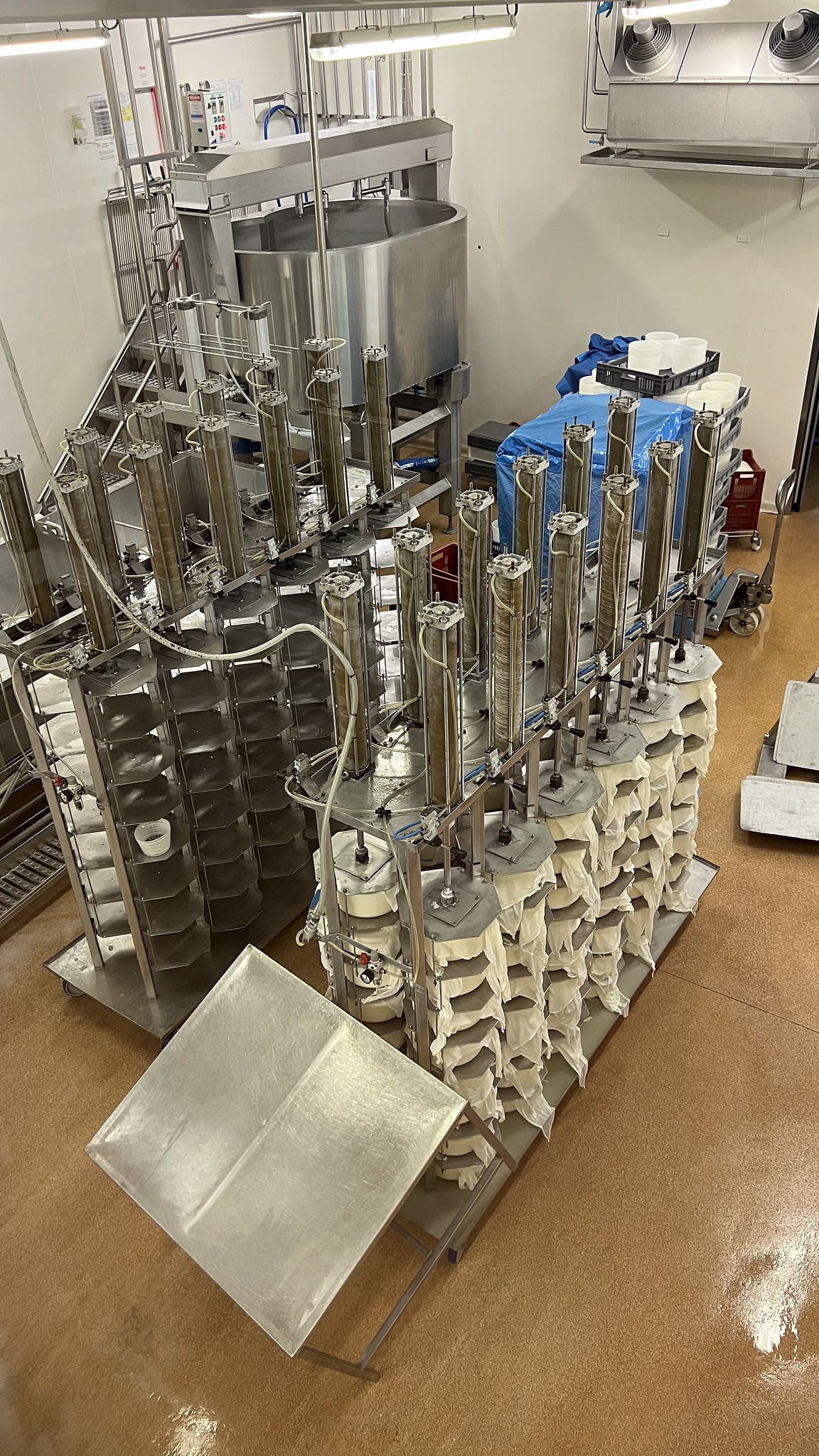 We then proceeded to Espelette, which specializes in peppers. We visited a pepper farm where pepper plants are started in a greenhouse and then transplanted into fields. Then it was on to a tasting of various pepper-based condiments. They were all delicious and we bought some to take home with us. The pepper "caviar" turns out to be great added to pasta sauce to give it a zing. There was then time to stroll through the village of Espelette. We stopped in various stores and I fell in love with an example of marquetry and bought it. 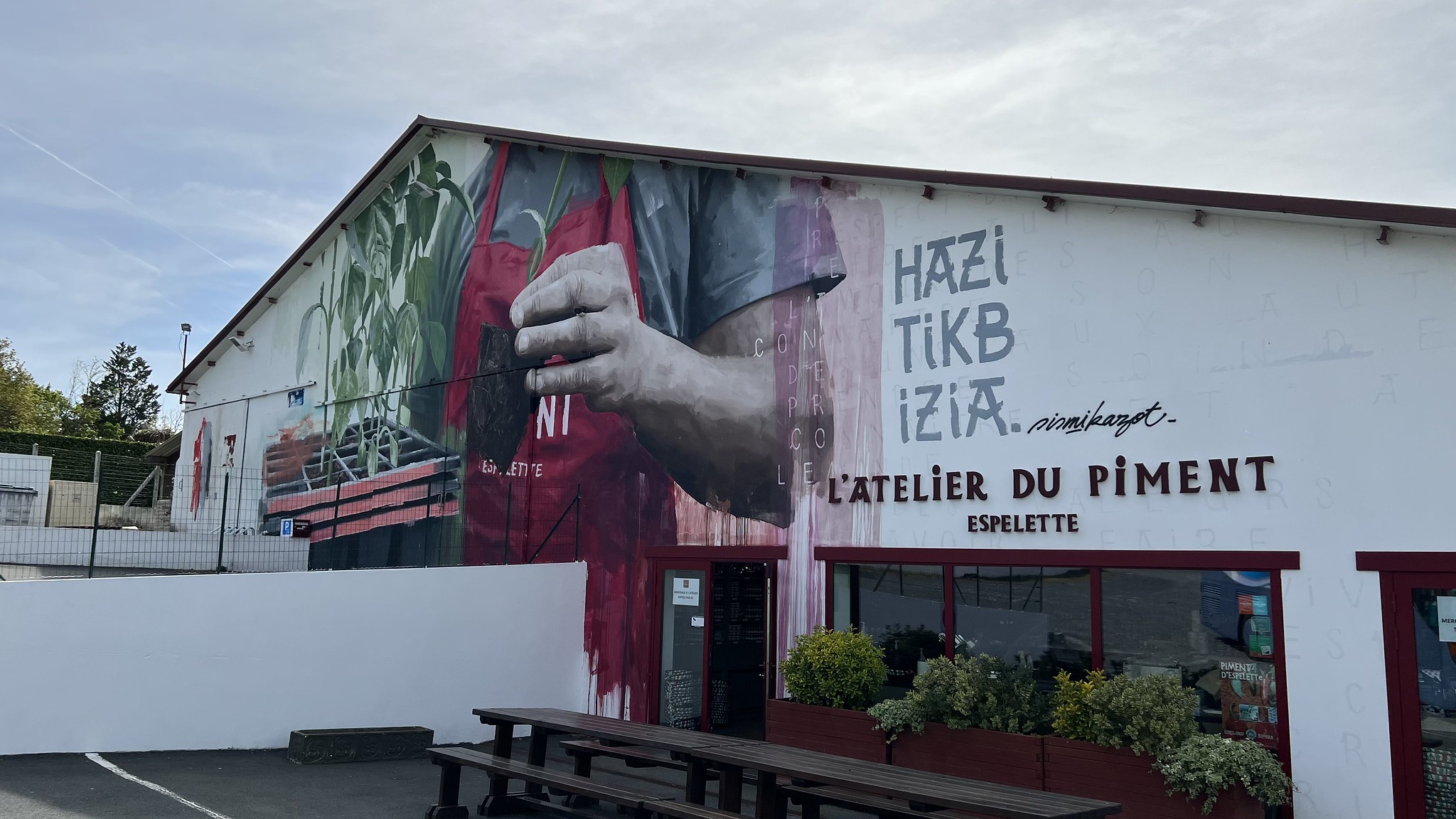 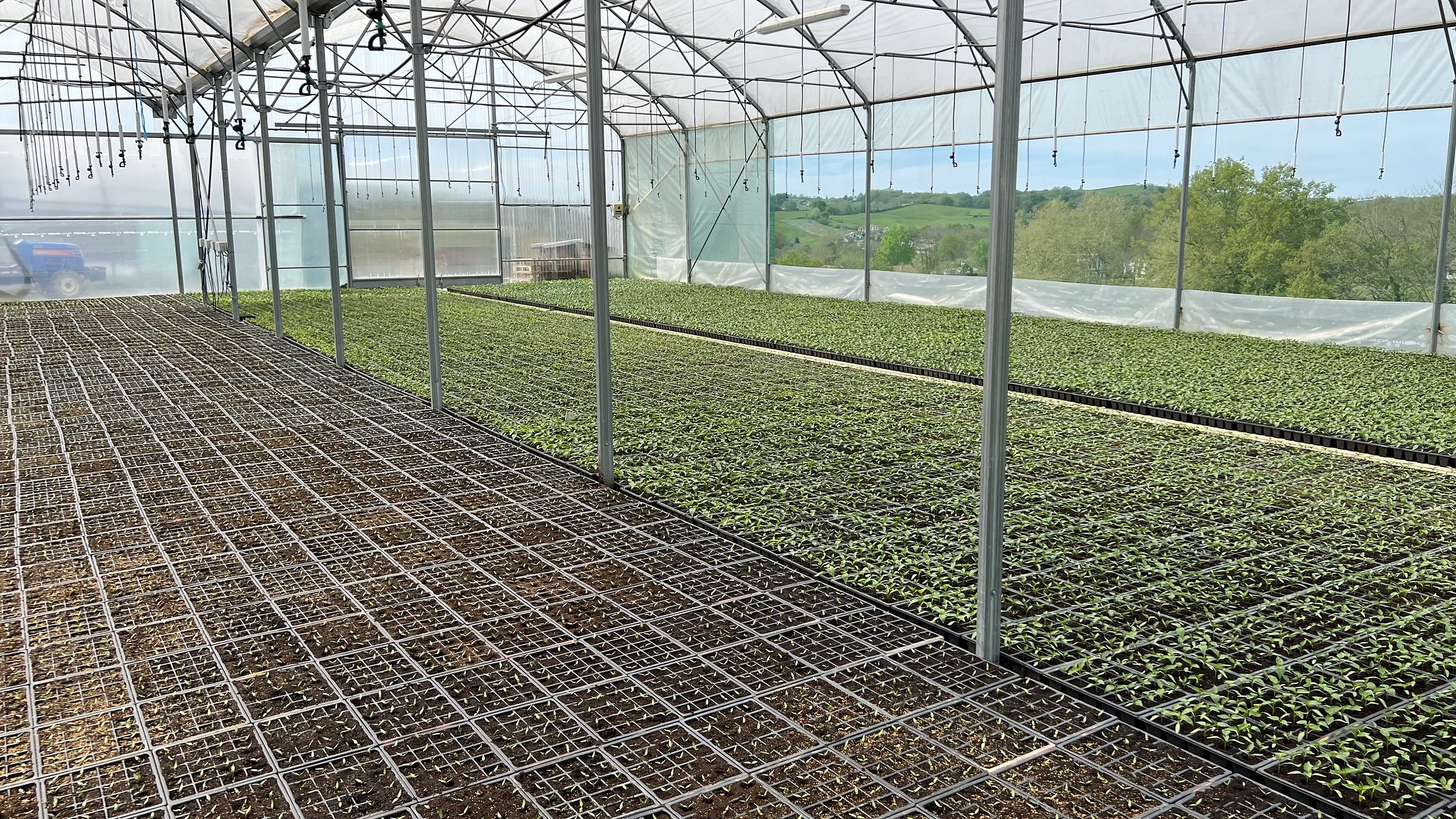 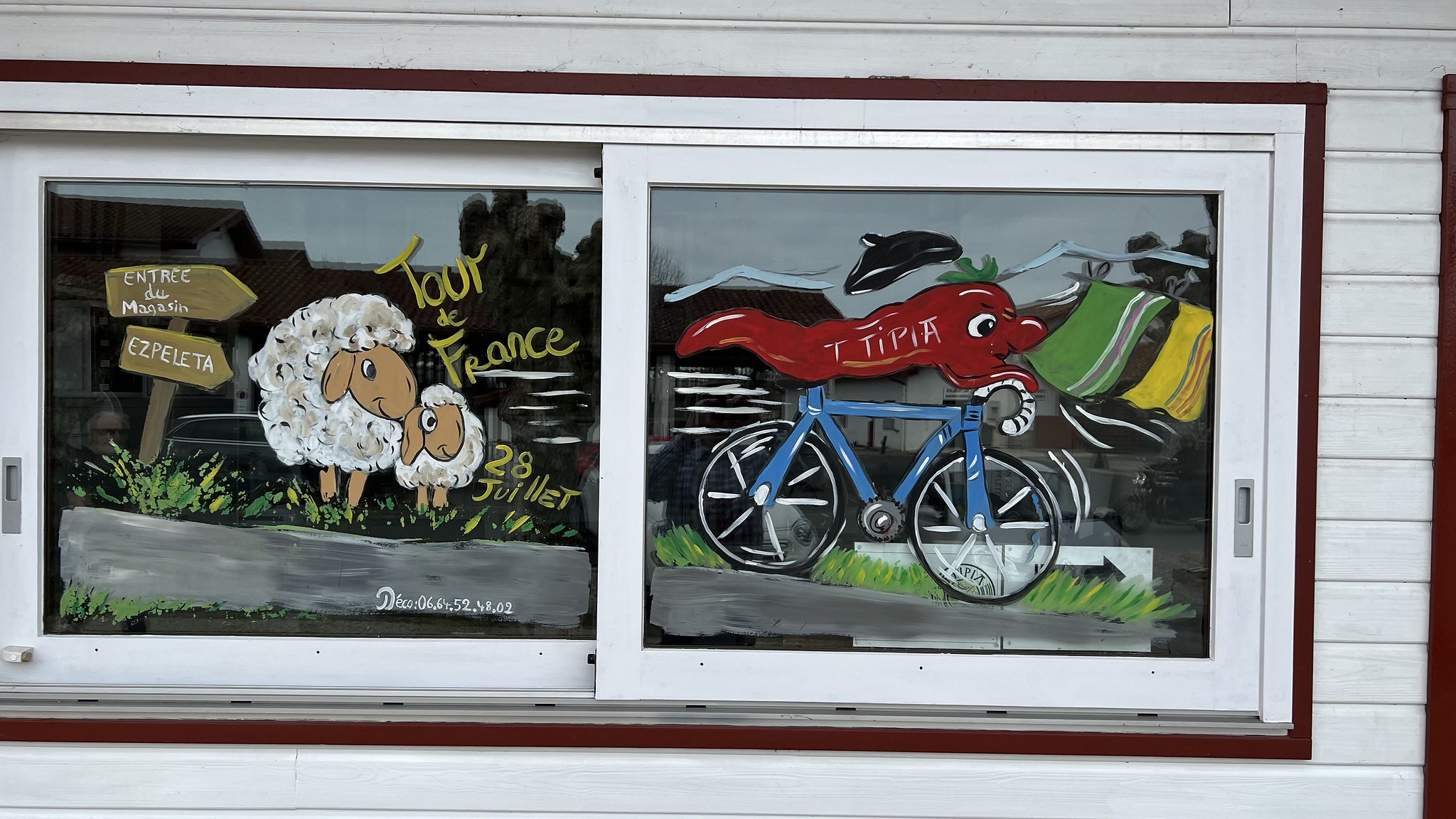 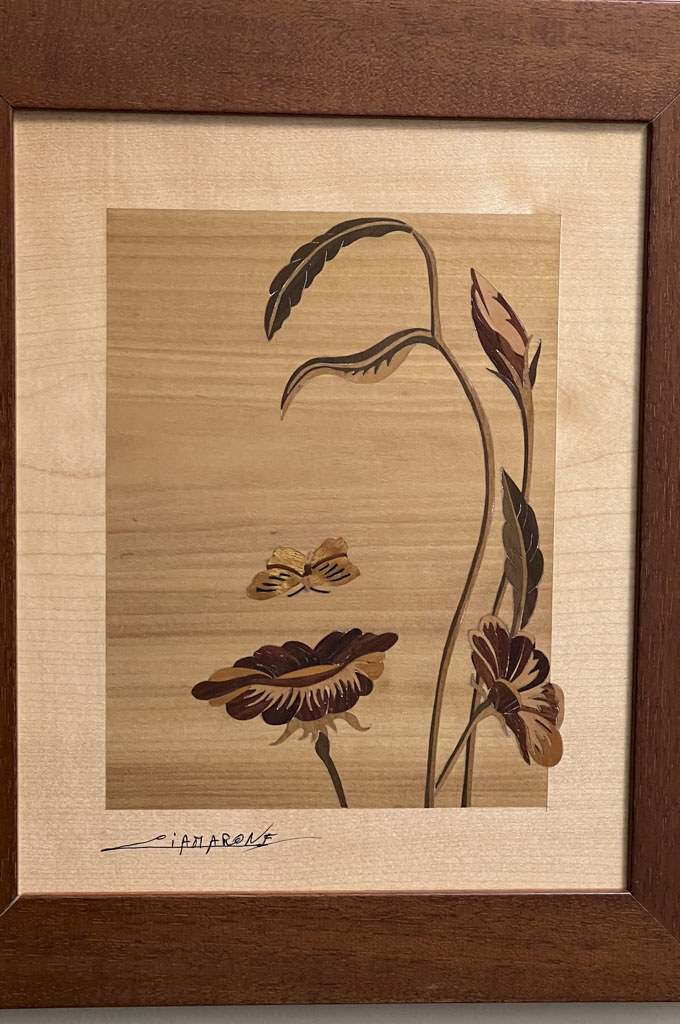 This was the last day of the tour, but it was full. Our first stop was Saint-Jean-de-Luz, a picturesque town in the heart of Basque country. The itinerary had called for a guided tour of the town, but most of the other tour members needed to get a supervised COVID test done for reentry to the US (Leslie and I had done this online with proctored tests we had brought with us and were both negative), so while those folk went to a pharmacy to get tested, Leslie and I walked around the harbor and Leslie picked up some more shells and rocks from the seashore. 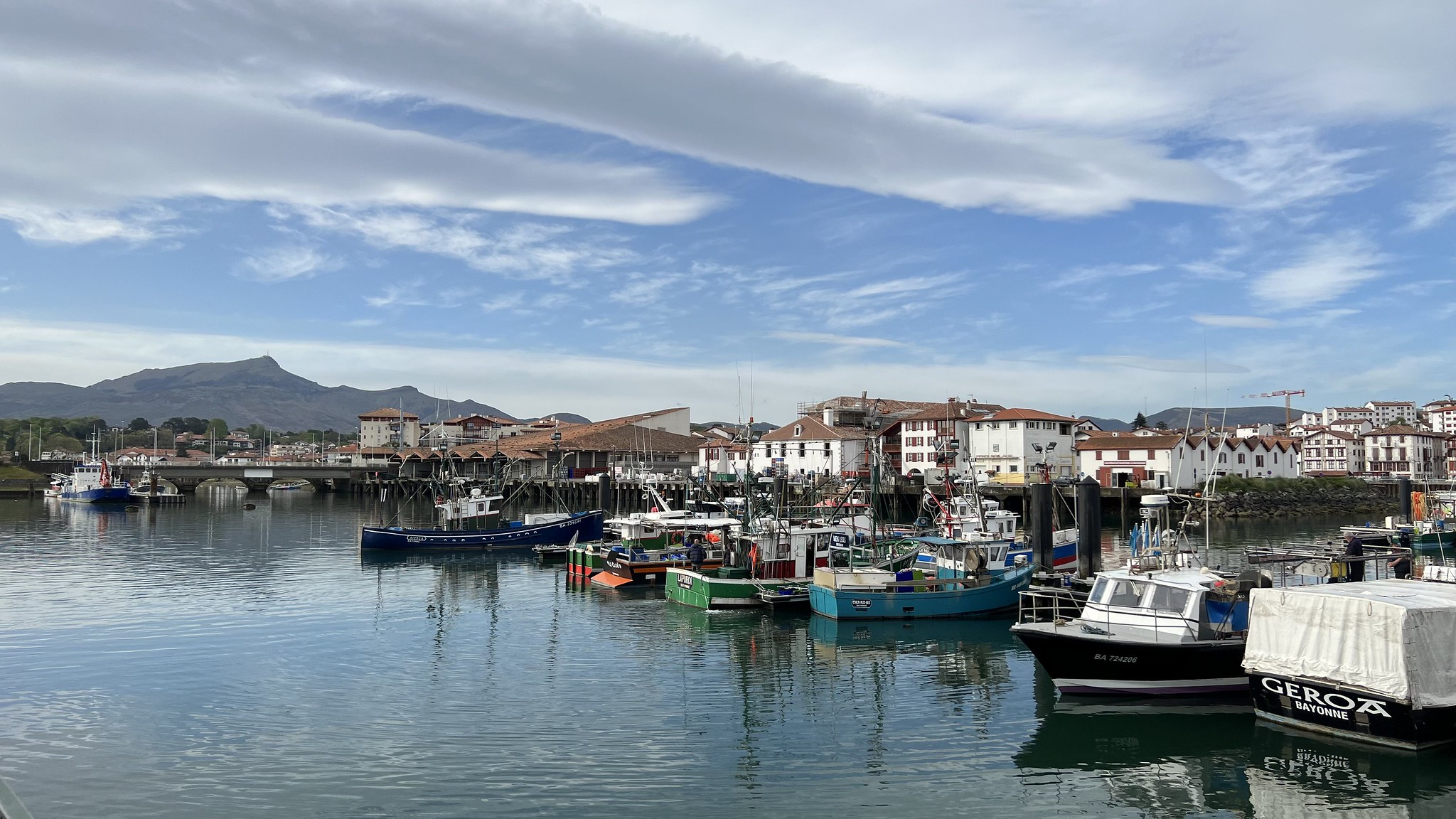 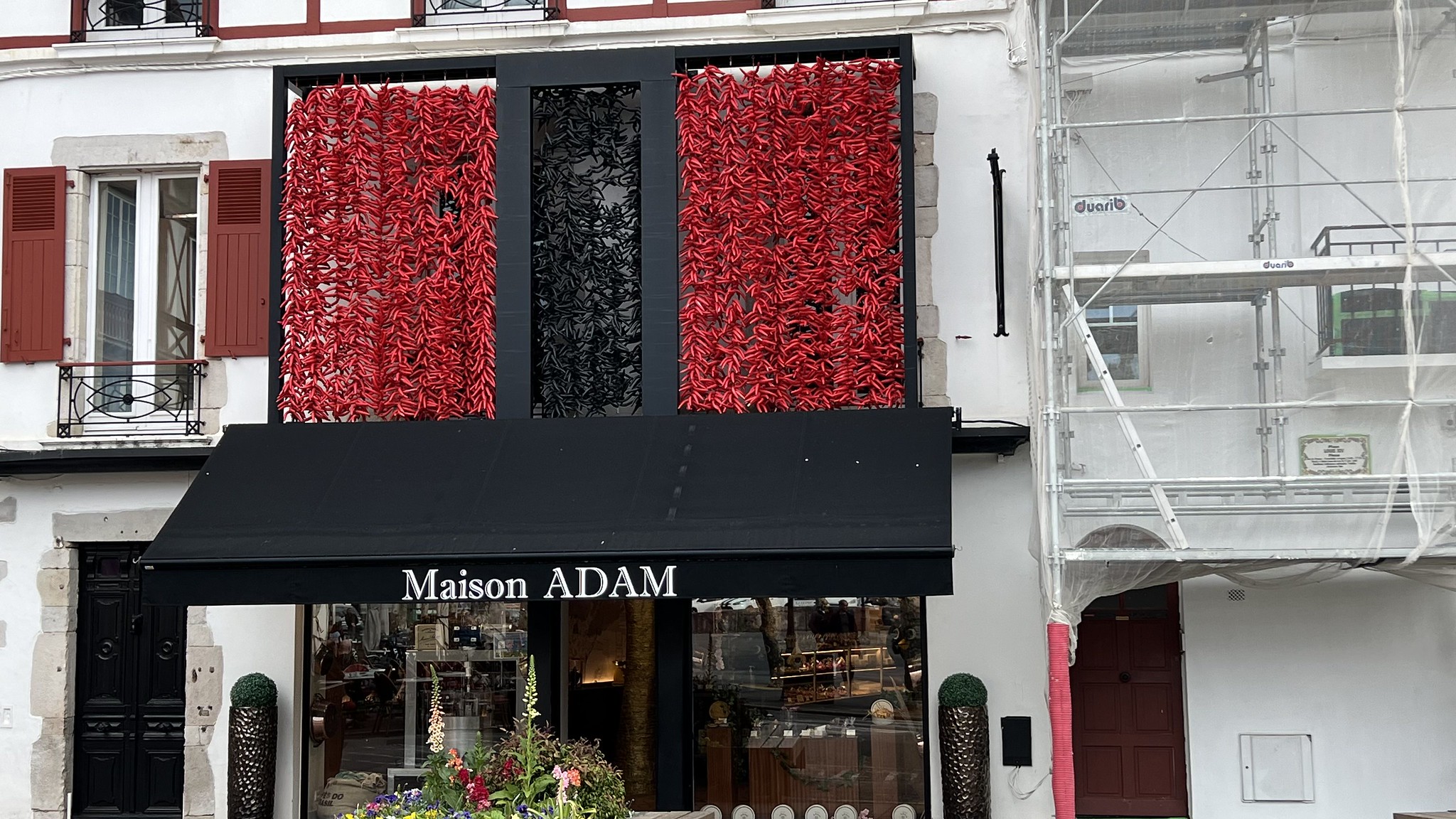 Then it was on to a Basque ciderie, where we had tastings of various apple ciders they made and then an enormous lunch. The gimmick here was that every ten minutes someone would shout TXOTX! (pronounced "tchotch", basically a Basque version of Cheers!) and that was your signal to get up and refill your glass from the cider vat of your choice. The method of doing this was that a valve would be opened, the cider would stream out (yes, that's what it would look like), and you'd scoop up the cider with your mug. 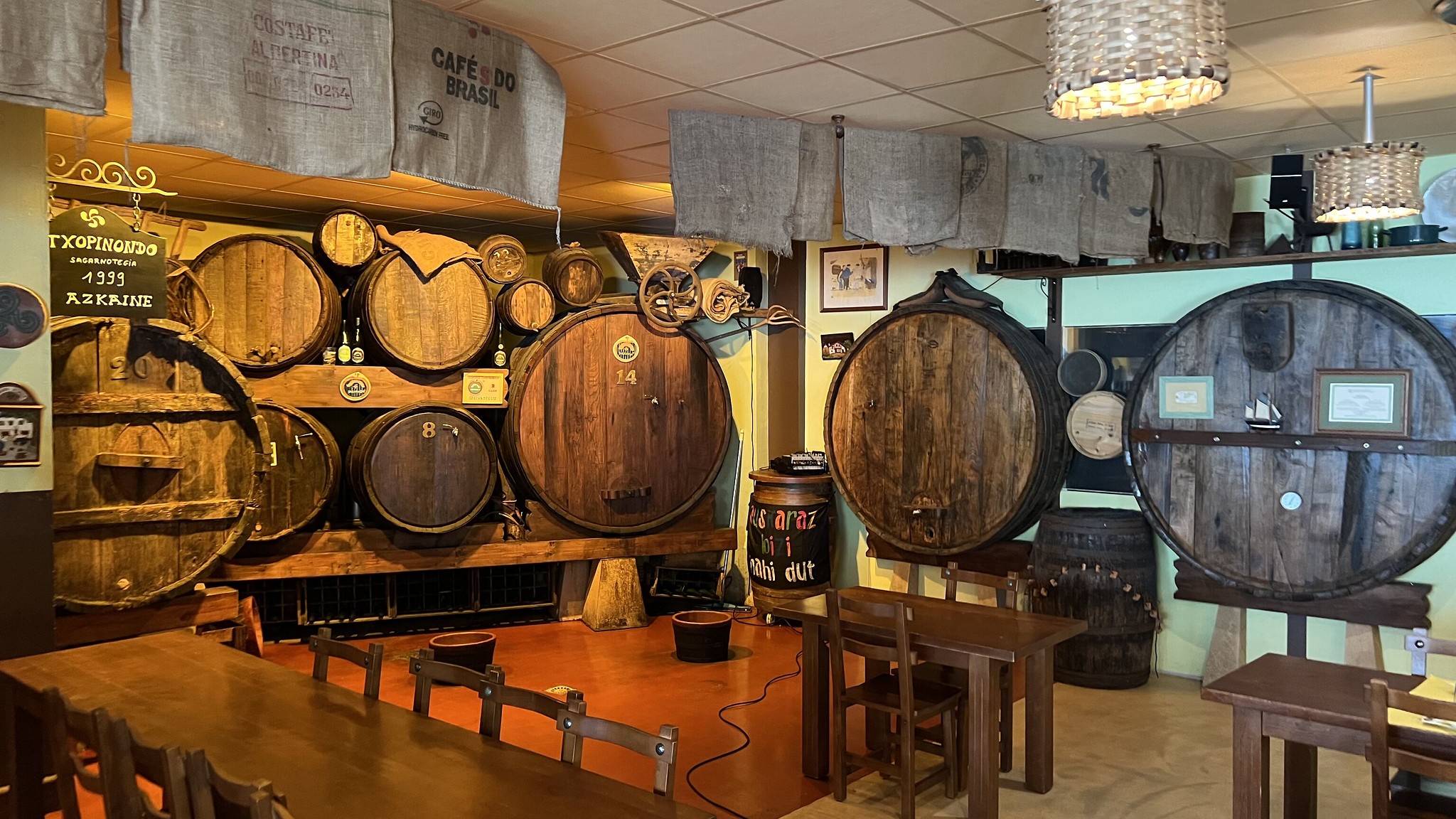 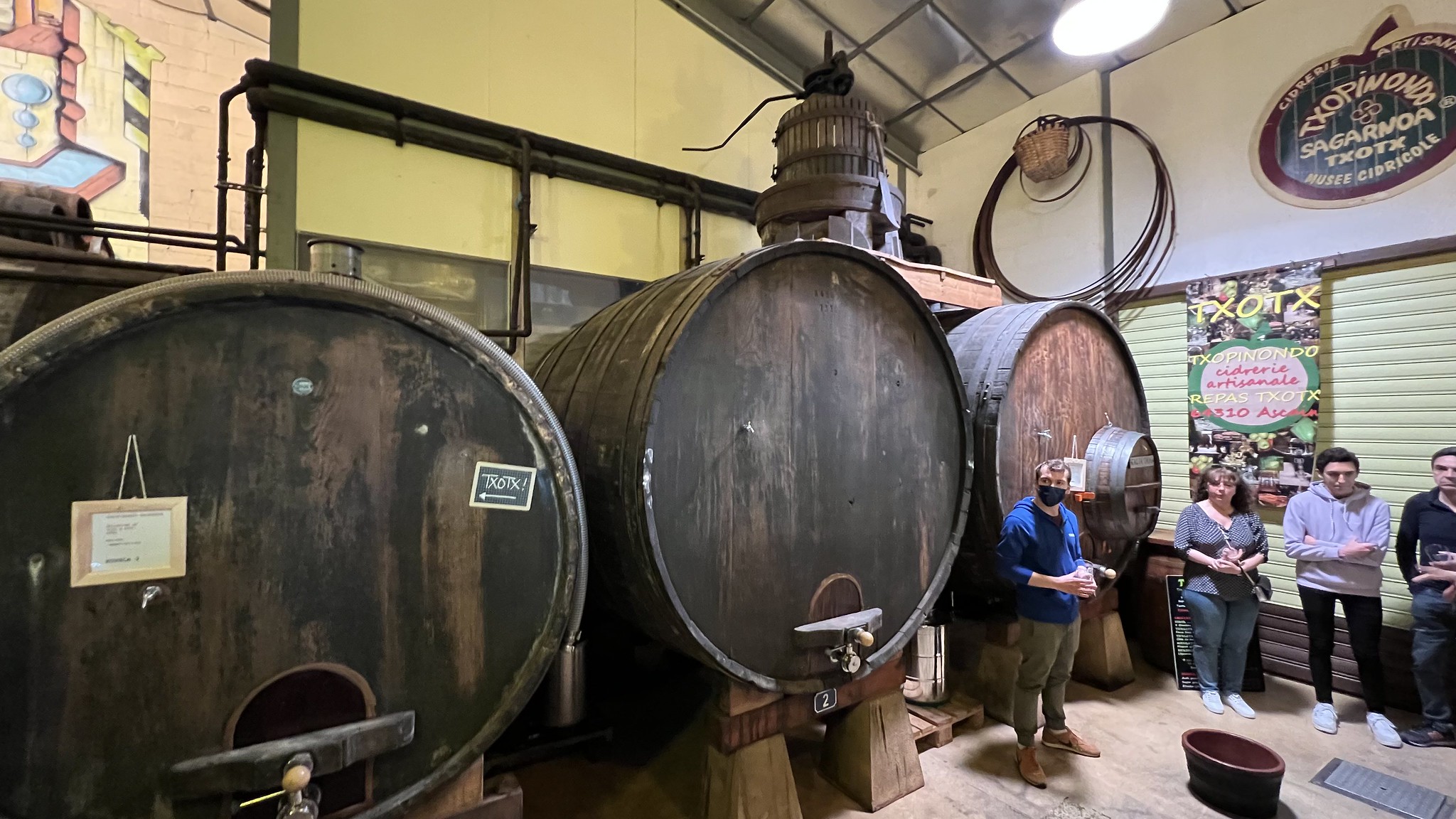 Our last stop was a traditional fabric factory where they made towels and many other things. We were given a tour of the factory floor, right up to the running machinery. At one point, they started a very noisy machine that wove fabric based on punch card instructions (the Fortran guy in me was pleased, though I knew that the Jacquard loom was the origin of punch cards) and then walked away, leaving some of us right next to the machine. This would never happen in the US, and I was delighted. We bought a lovely dishtowel there. 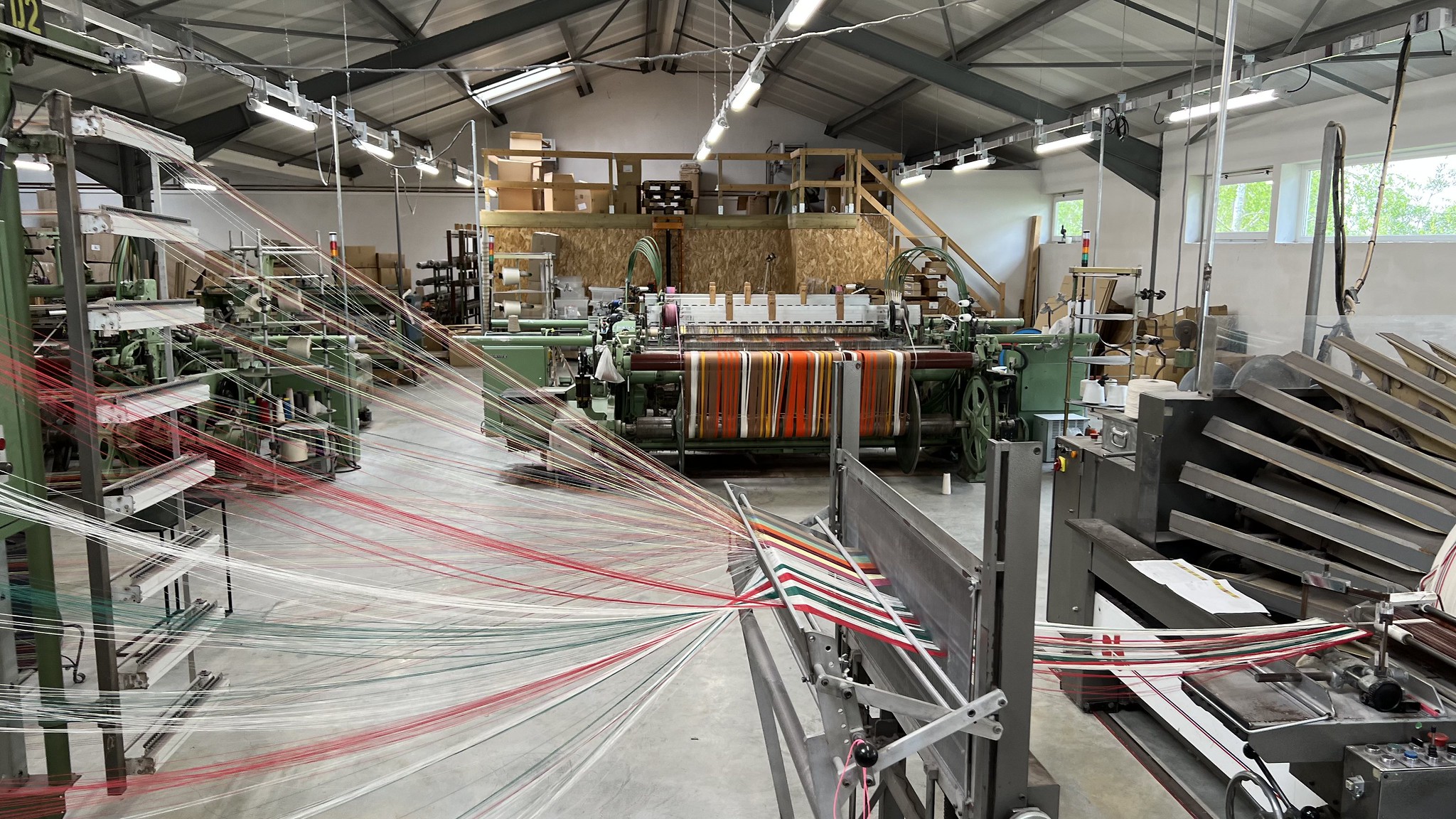 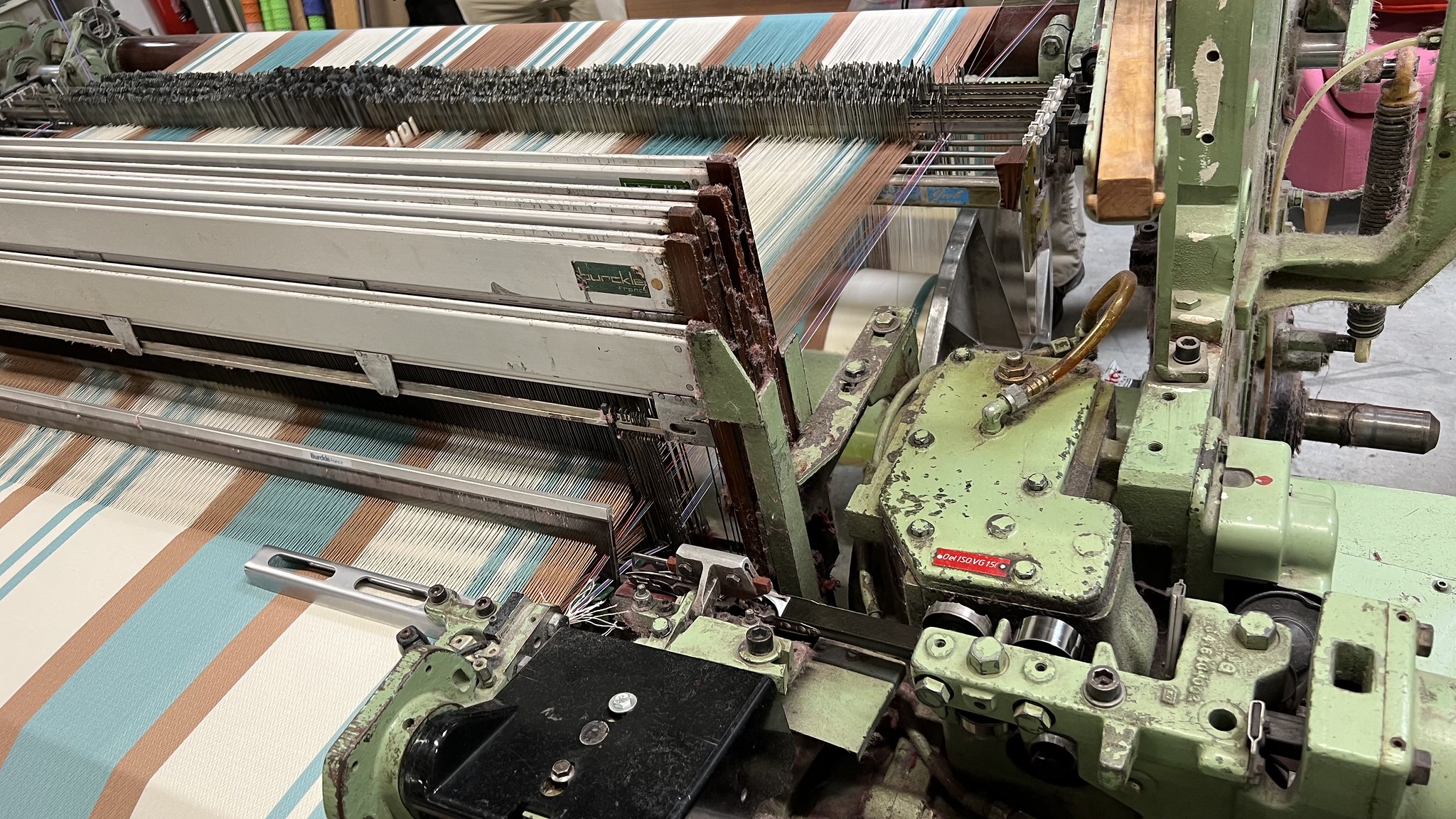 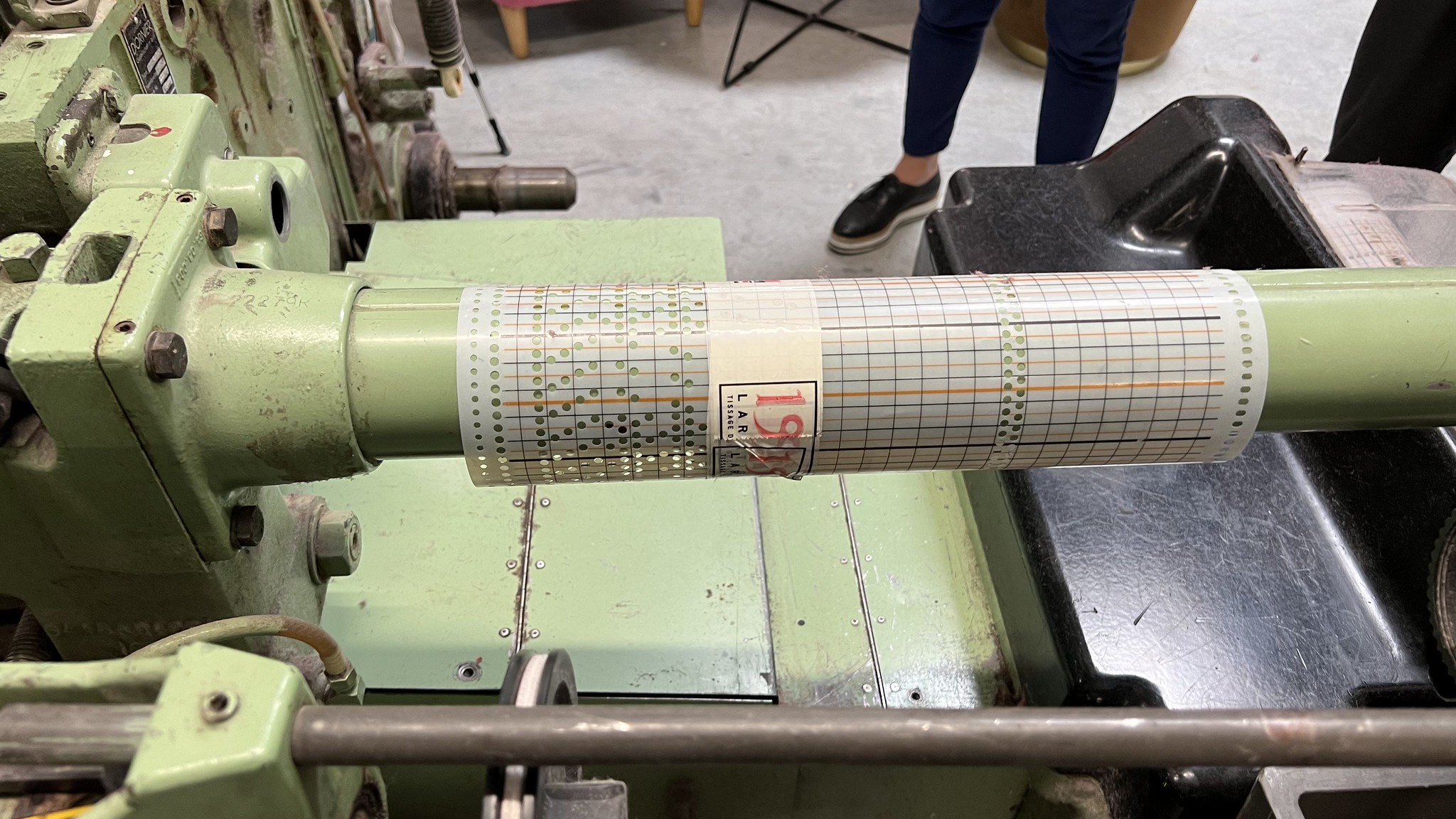 The schedule called for "dinner at a local restaurant", but it would be so late and we were so full from lunch that we decided to skip it and pack. There was a vendor selling Basque cakes outside the hotel - we bought one of those and had it as our dinner - it was delicious.

Our original itinerary had us leaving the Biarritz airport at around noon. Air France had canceled that flight, though, and we were rebooked on one that left at 7:10AM! It turned out that more than half our tour was on the same flight. Gabriella had arranged for a bus to take us to the airport, which meant waking up at around 3:30AM. We got to the airport right around 5AM only to find the doors locked (and it starting to rain!) Luckily there was cover and the doors opened about ten minutes later.

We then had to wait for the counter staff to be ready, we checked in, then waited for our flight. Back to Paris, back to the Air France lounge for a few hours, and then our flight back to Boston, which was uneventful. We got home in the late afternoon, with our kitties all glad to see us (they had been well cared for in our absence.)

All in all, it was worth the two-year wait to see a part of France we had not visited before and to get an up-close-and-personal look at the making of various kinds of French cheeses. We've already signed up for a 2023 Venissimo tour to northern Italy! We love France and are returning there later this year (a trip that had been booked for 2021) for a very different experience.