The year was 2019 when our "travel buddies" Bud and Gingy, whom Leslie and I had first met ten years earlier during our vacation to Japan (pictures from that trip), asked us if we were interested in joining them on a trip to southwest France being put together by Venissimo Cheese, a shop in San Diego (where Bud and Gingy were living at the time.) This would be a small (fewer than 20 people) group and the itinerary would focus on French cheeses, visiting fromageries throughout the region. Oh, and also French wine! How could we say no? We signed up right away, with the trip planned for April 2020. Oh, did I say 2020? Sorry, I meant 2021. No? How about 2022?

(This travelogue includes selected pictures from the trip. Click on any of them to view on Flickr (more sizes and location information.) All my photos can be found in my Southwest France 2022 Flickr collection.)

While travel in the Spring of 2022 was still fraught with obstacles, including rapidly changing COVID rules, the tour was finally on, though the details of the itinerary had necessarily changed somewhat since the original 2019 plans. The official tour began April 1, but we decided to arrive in the starting city of Bordeaux three days early, both to have a chance to deal with unanticipated delays and also to recover from jet lag. Besides, we wanted a chance to explore Bordeaux on our own for a bit. Finally, after two years of rescheduling, we boarded our Delta flight from Boston to Paris the evening of March 28. The flight was very pleasant (we were in Business class) and the food excellent.

We arrived at Paris' Charles deGaulle (CDG) airport at around 8AM. In the past, it has taken an hour or more to clear immigration and customs (Madrid was a particular nightmare), but it was quite efficient here and the line moved quickly. We then had about five hours before our flight to Bordeaux, which we were able to spend in one of the many Air France lounges. Initially, we had planned on obtaining a "Pass Sanitaire" (France's digital proof of vaccination required to go almost anywhere) at a pharmacy in the airport, but shortly before our trip France dropped this program so we didn't need to do that.

The flight to Bordeaux was on a much smaller plane, of course, but it was also a short (1:15) flight. Since we had arrived three days ahead of the start of the tour, we had arranged to be met at the airport by a driver and taken to our hotel for the next week - the "InterContinental Bordeaux - Le Grand Hotel". The InterContinental is an old hotel right in the center of Bordeaux's "downtown" district, a few minutes walk from the Garonne river. It's some five buildings, connected by passages, some with steps up and down and shifting levels. We had asked for, and had been promised, a room with a King size bed. We knew that European bed sizes were different from the US, but the bed in our room seemed small. The room itself was also on the small side (not unexpected.) When we compared it to the bed in Bud and Gingy's room, though, we realized that what we had was a Queen and not a King. I went down to speak to the hotel manager, who apologized, explained that their records didn't reflect a reconfiguration of that room, and offered to move us to a larger room with a King bed - we accepted. 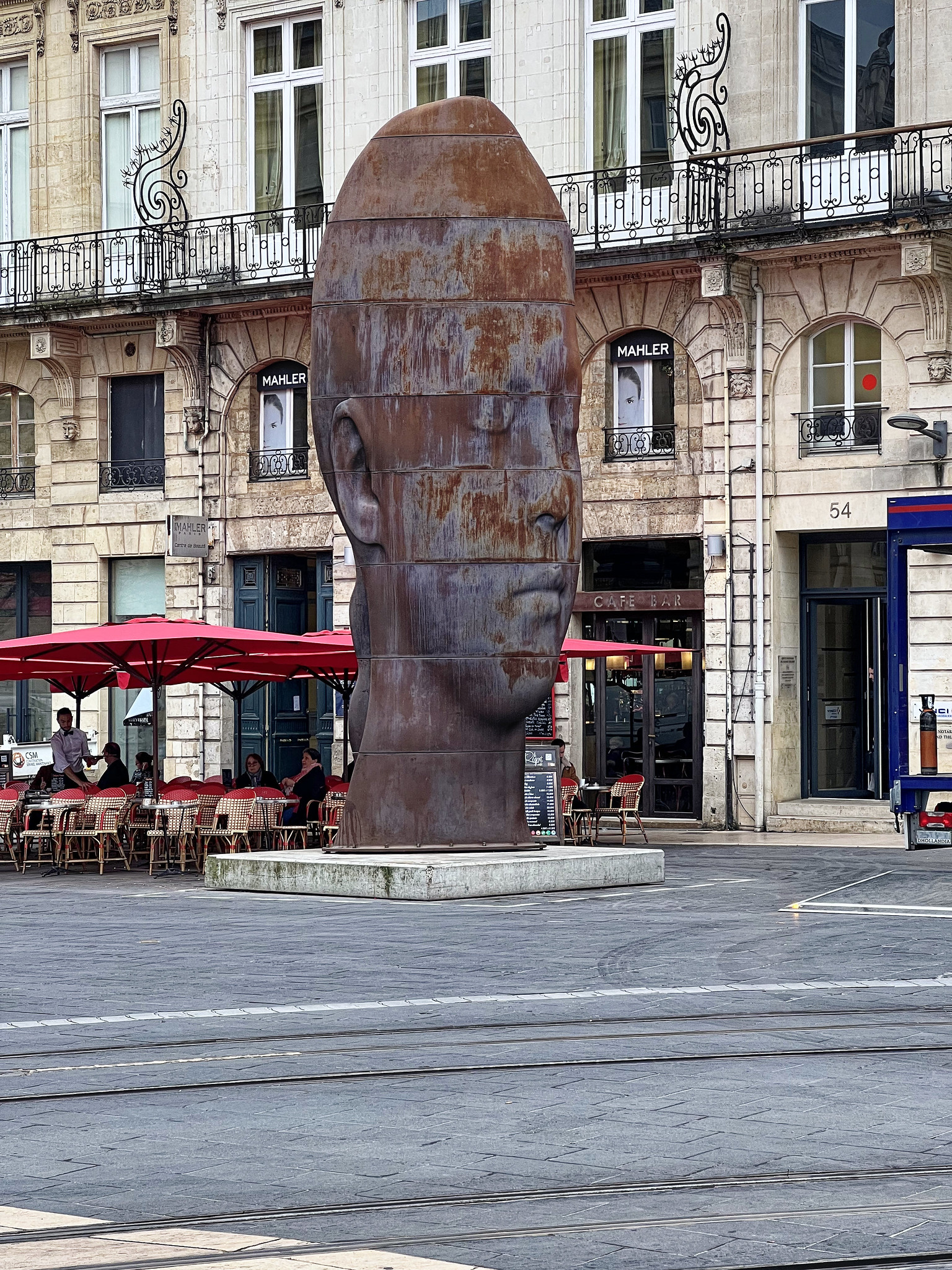 One of the first things we spotted, across the street from our hotel, was this enormous sculpture, created in 2013 by artist Jaume Plensa. From the plaque at the base:

Sanna belongs to a series of seven feminine figures envisaged since the encounter between the artist and the city was planned. Although only two of them could be cast and exhibited in Bordeaux, these figures represent a new path of reflection and experimentation in Plensa's work. By playing with the scale, the weight and the monumentality of the portrait, the artist transforms the ordinary into the extraordinary.

The in-hotel breakfast was insanely expensive, and likely more than any of us wanted. When the Venissimo tour formally started, breakfast would be included, but for the first few days we were on our own. I had done some looking on Yelp and Google for nearby places where we could buy some baked goods and coffee, and had found a highly rated shop called KURO Espresso Bar just around the corner from our hotel. This turned out to be a delightful place, with an ever-changing assortment of fresh-made brioches, muffins, scones and quiches, plus great coffees. We ended up having something there every day, and plan to return when our next trip stops in Bordeaux for a day.

We weren't up for doing too much this day, but did walk along the Garonne river for a while, then back up through Porte Cailhau and wandered into interesting-looking shops. 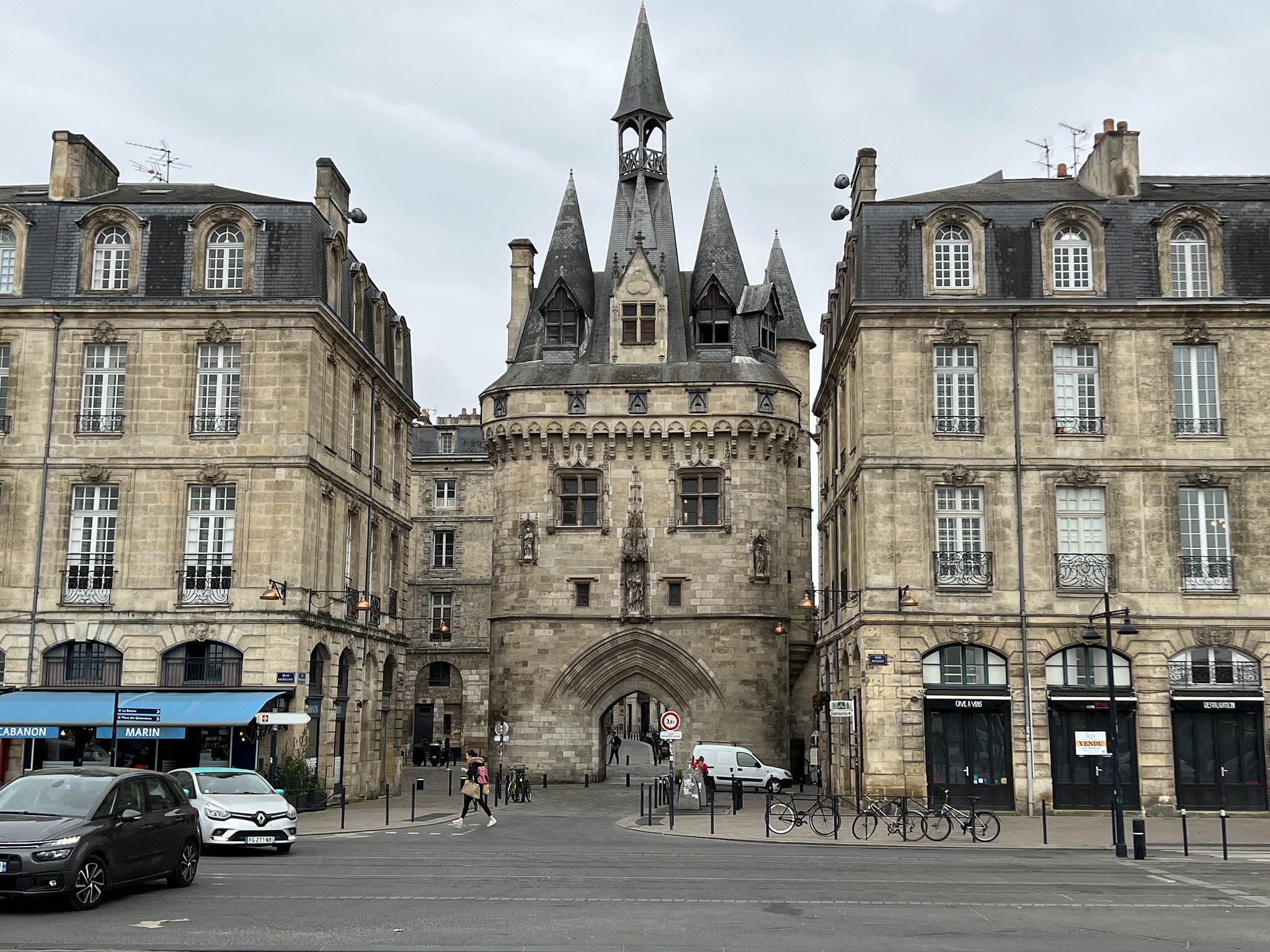 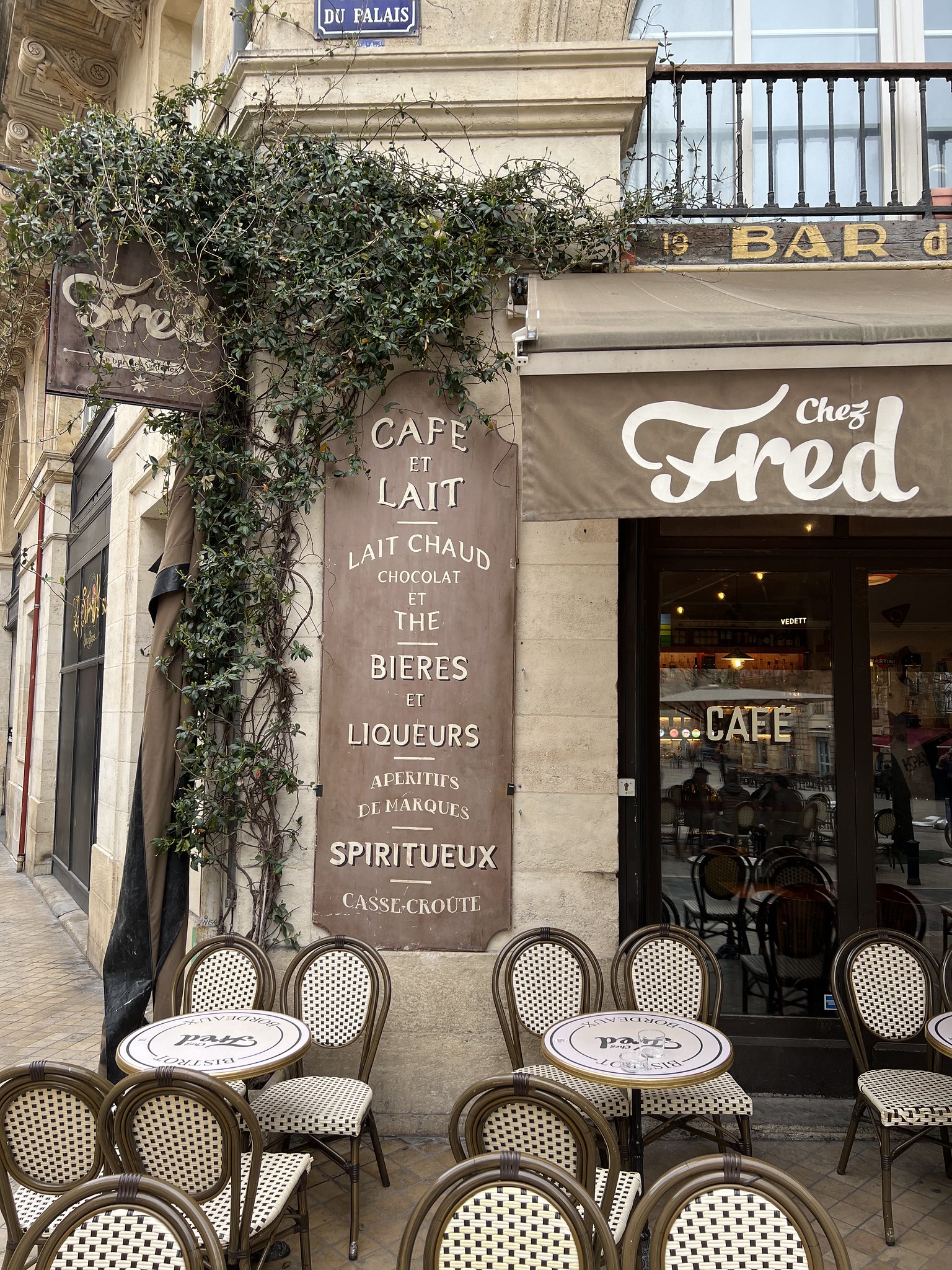 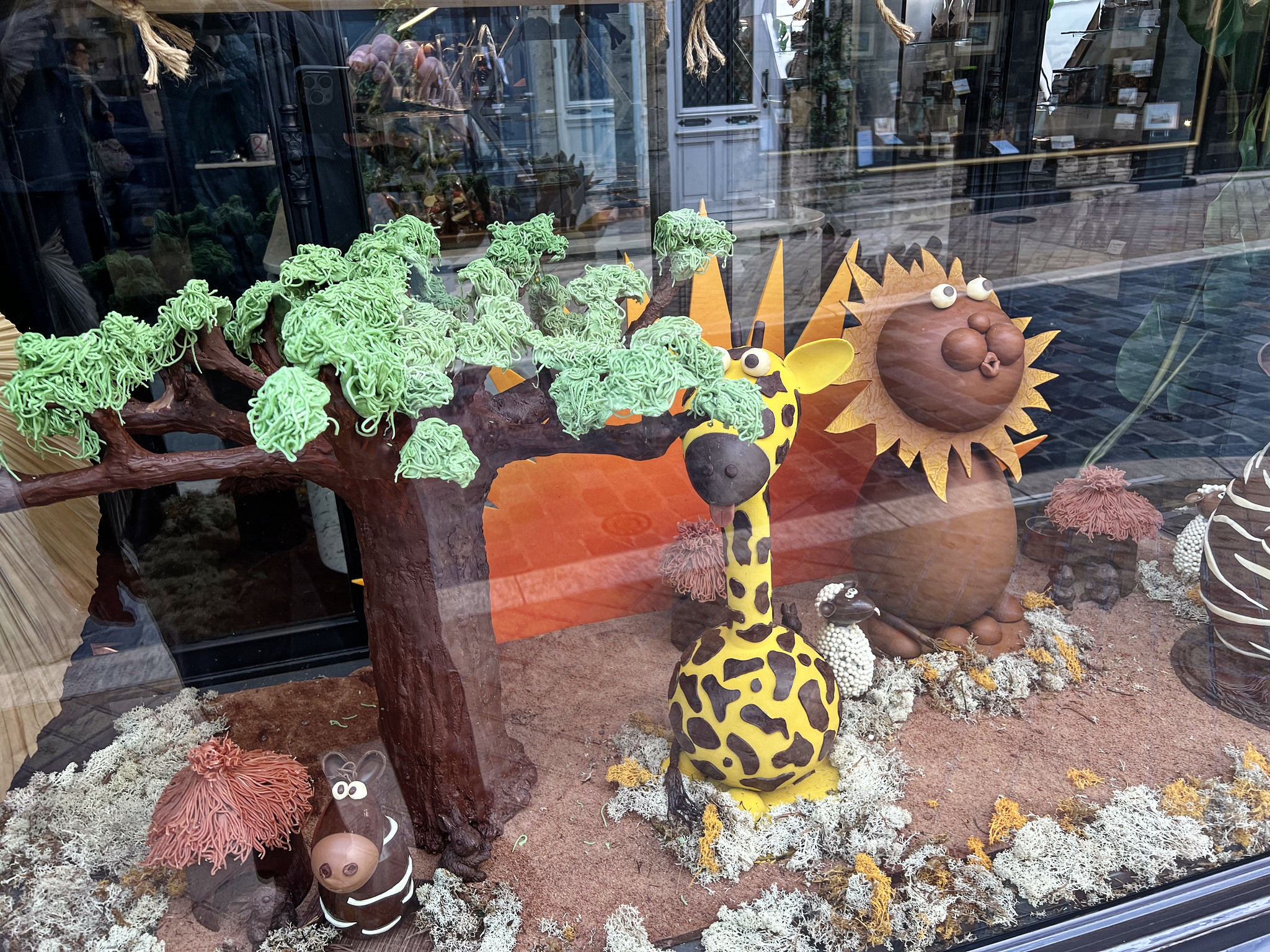 Bud had wanted to visit a "Museum of the Resistance" (National Center Jean Moulin), but it had been closed for months. Instead we went to the Museum of Decorative Arts and Design, which was a sometimes-odd collection of modern and older artwork that was usually more decorative than useful. 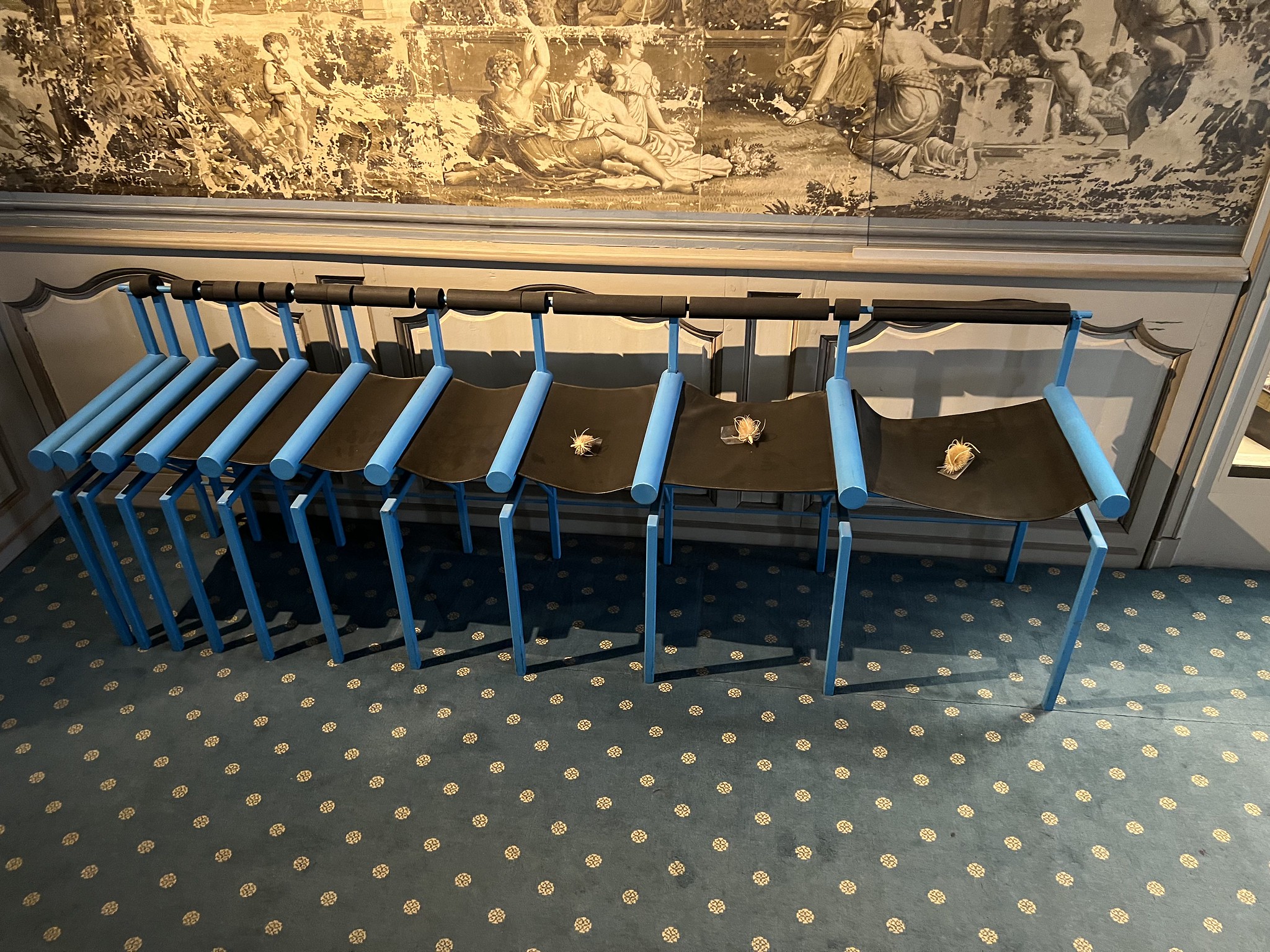 Street art in Bordeaux was everywhere, as seen in many European cities. Yes, there was the "tagging", but there were also some impressive artistic (if sometimes incomprehensible) displays. When I asked about this, I was told that if the art didn't interfere with anything, the city tended to leave it up. 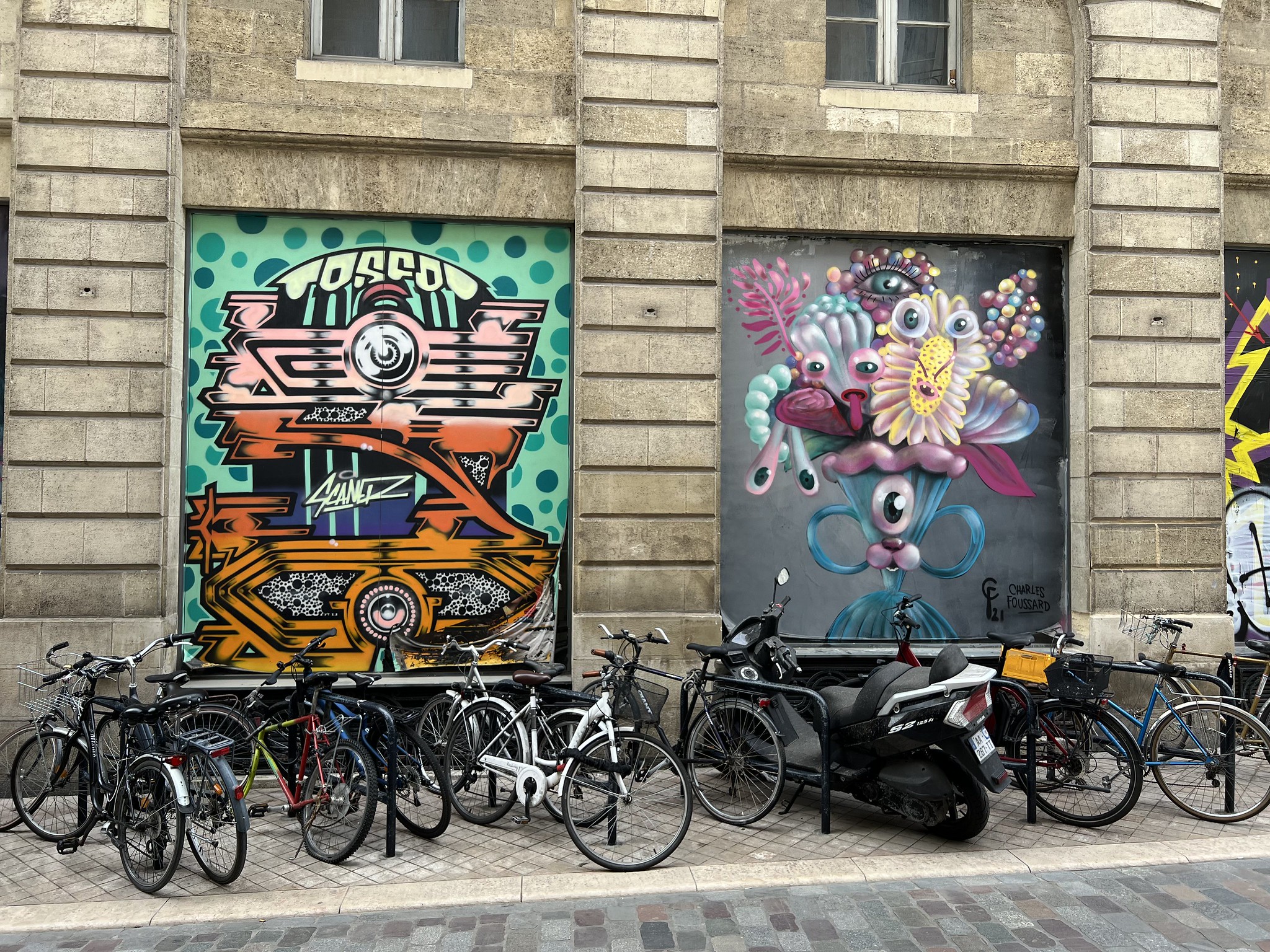 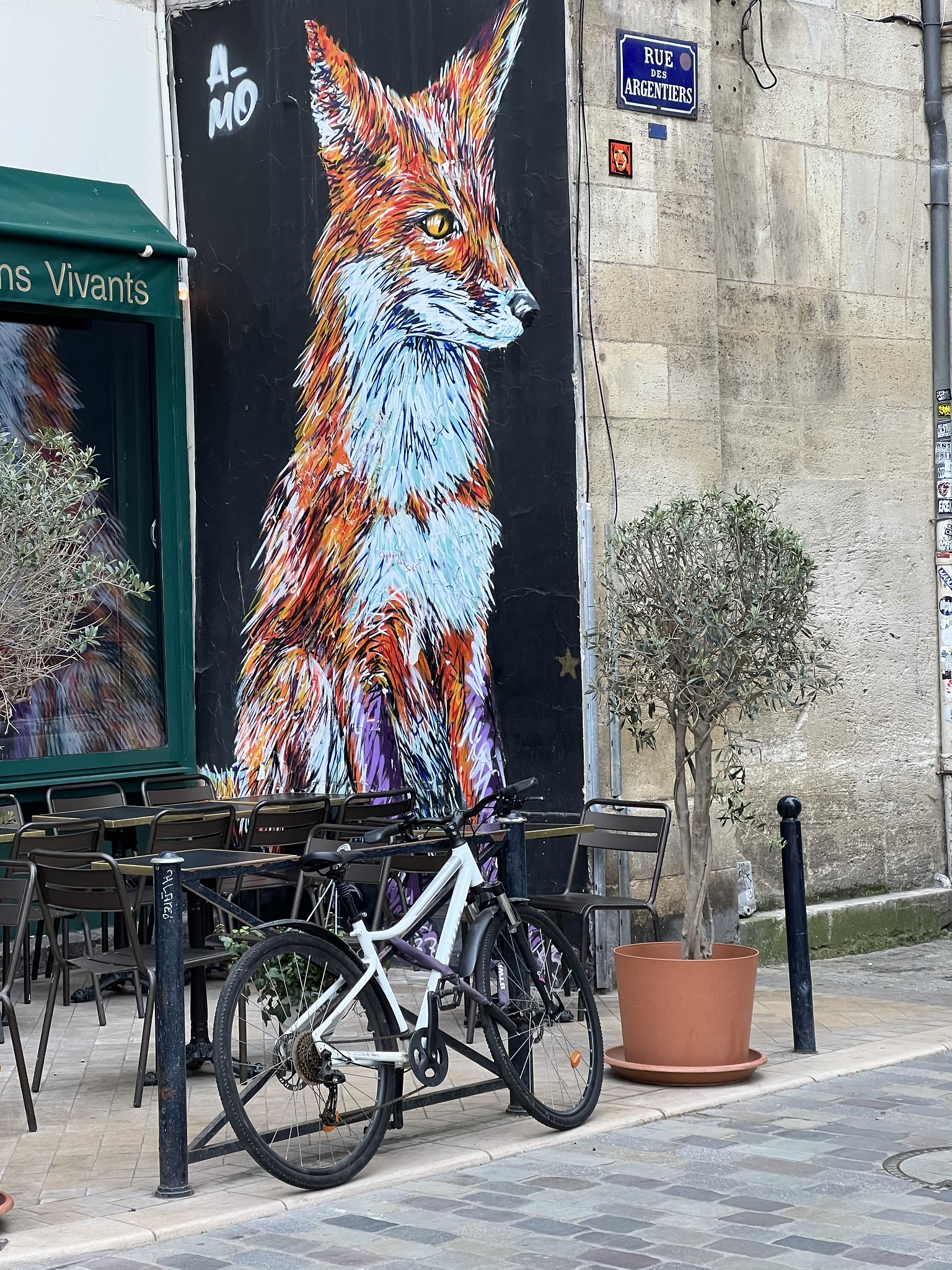