An excursion to Albi and Roquevidal was planned with a stop at a foie gras farm where the force feeding of ducks would be demonstrated. We chose to skip this and walk around central Toulouse instead. 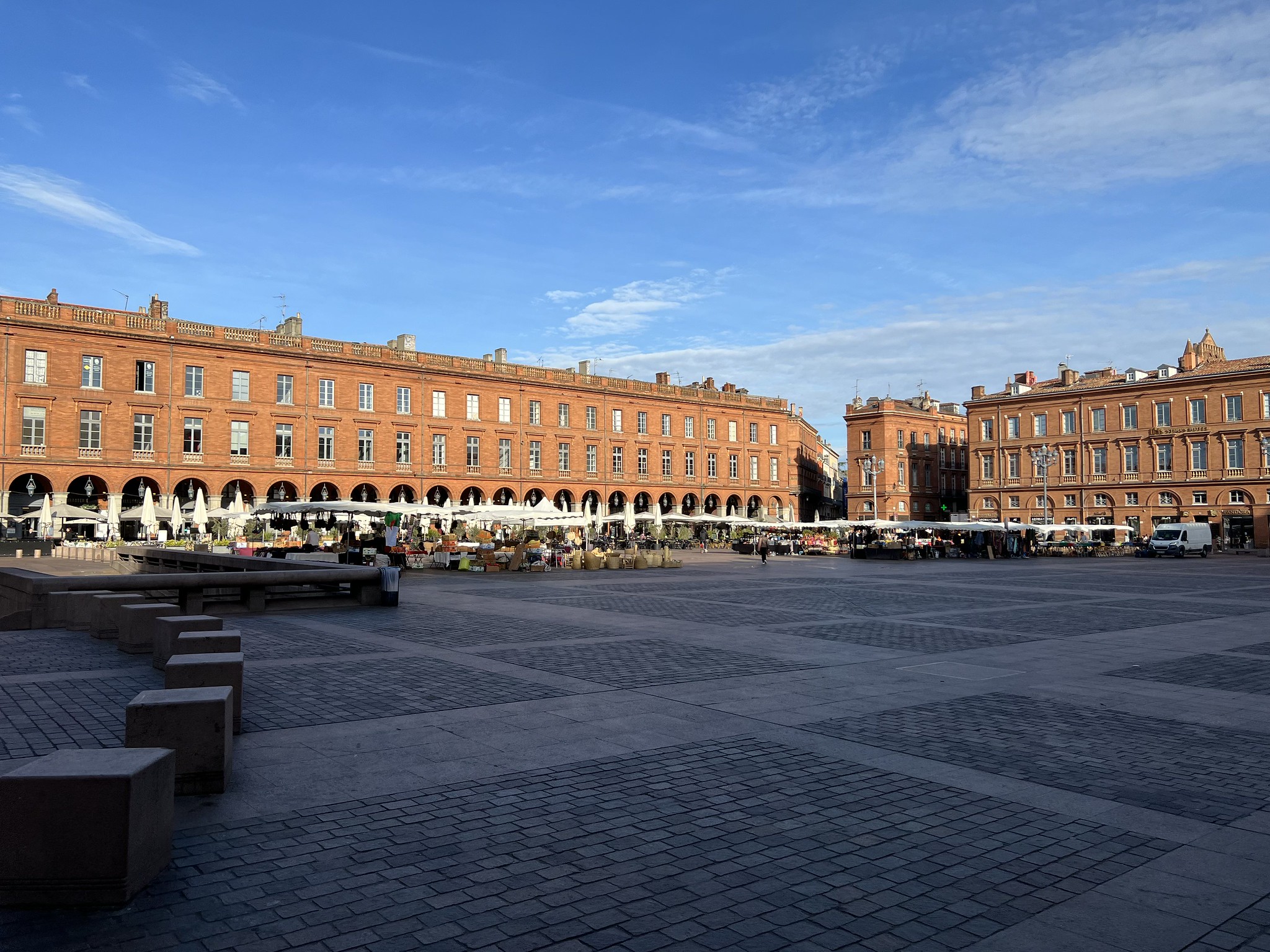 In the morning we walked to a nearby market (typical European style with indoor booths each specializing in a particular kind of food: meat, poultry (duck carcasses only EUR1.50), bakery, preserves, honey, wine (of course!) and.. cheese. It was at Fromagerie Emilee that we had a cheese tasting. Each of us received a tray with four kinds of cheese and two slices of (as we have seen everywhere in France) delicious but not strongly flavored bread. Emilee told us about each cheese, none of which we can get in the US as they're all raw milk cheeses not aged enough for import, with goat, sheep and cow milk cheeses included. 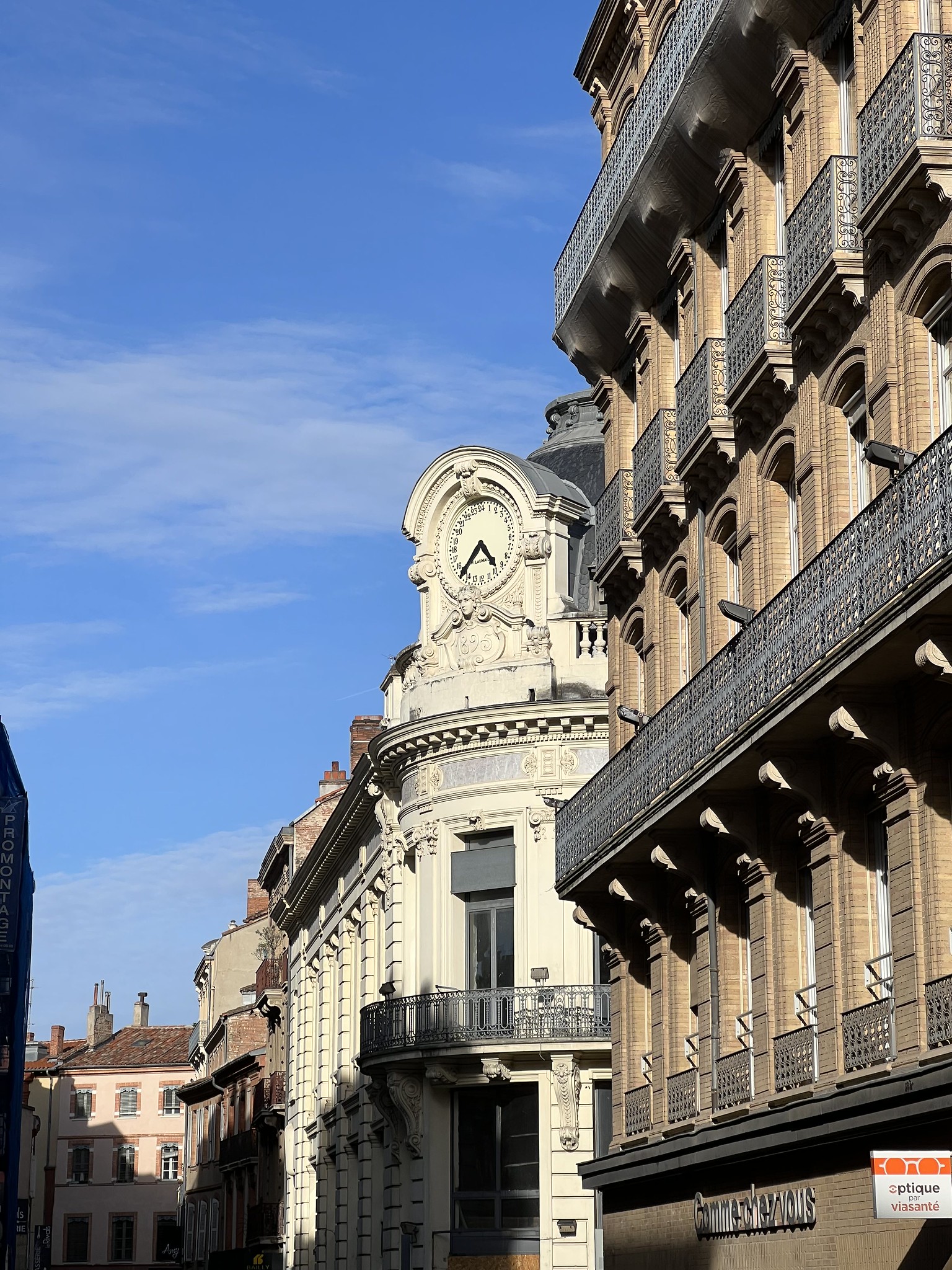 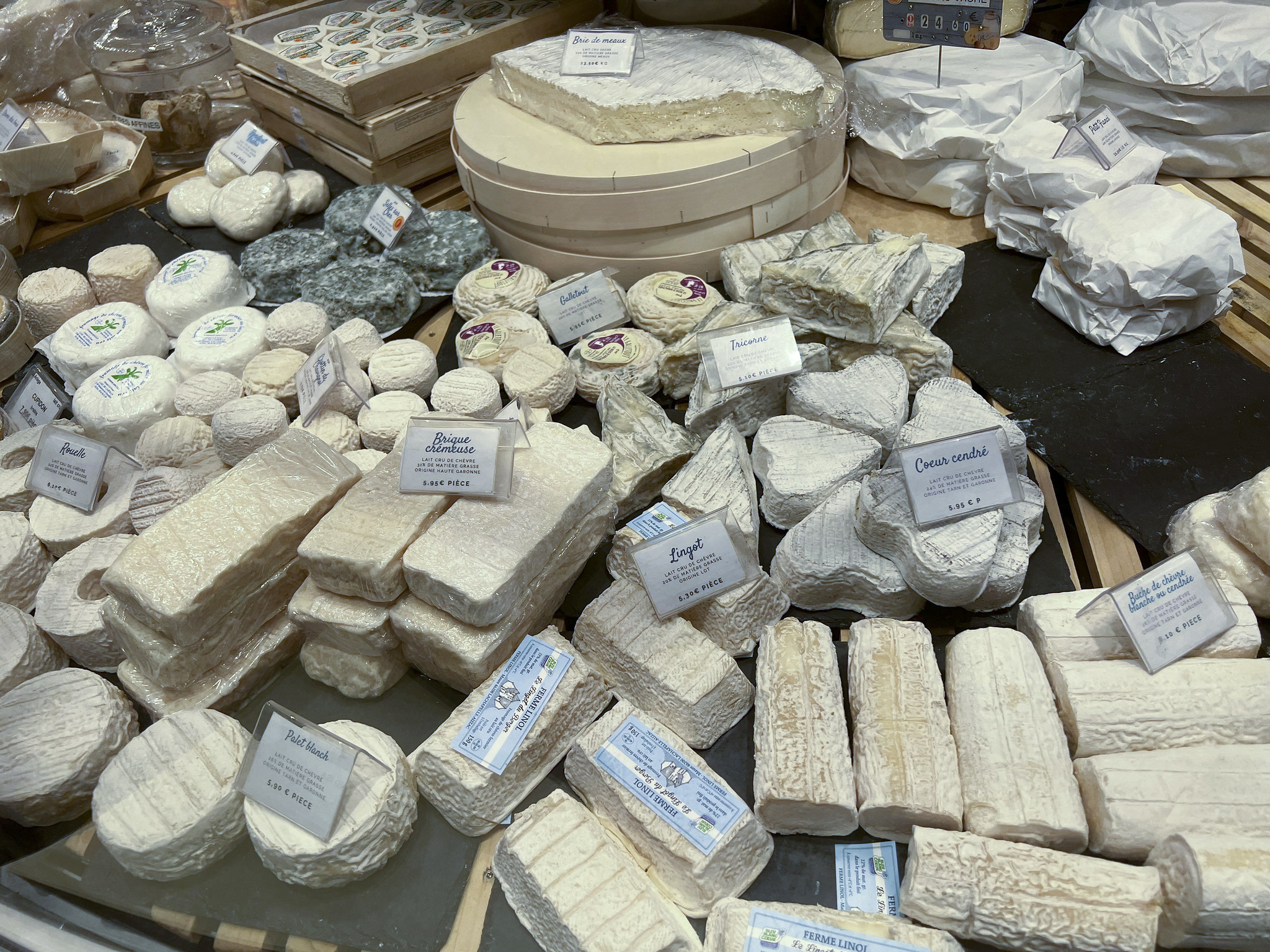 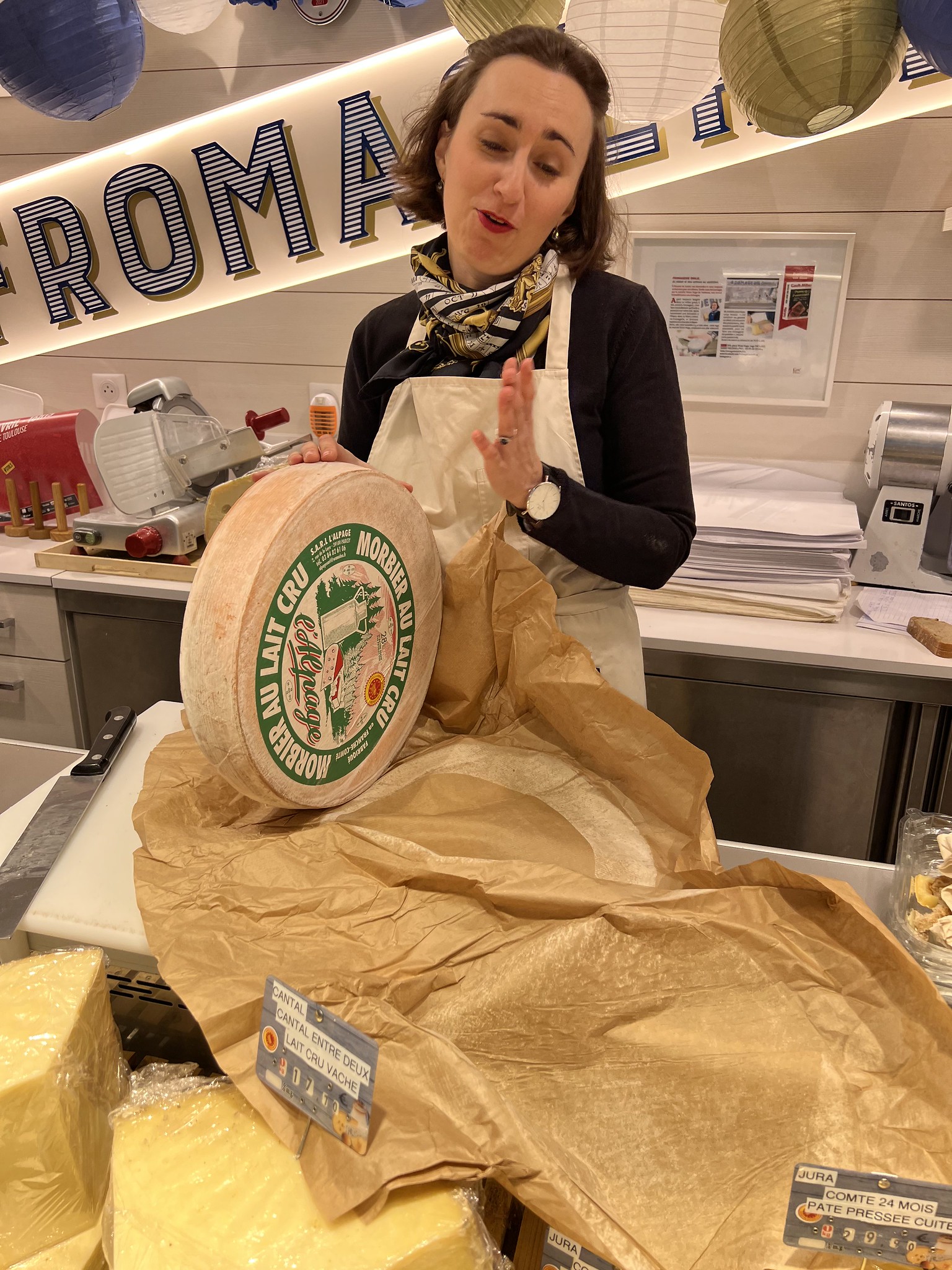 The cheeses we sampled were all on the mild side (one aged only two weeks), but they were all delicious. Afterward Emilee showed us how she buys cheeses - mostly quarter wheels but some whole wheels (if they are smaller.) When one of our group asked about the pale yellow block at one end of the display, we were told it was butter, AOP designated as coming from a small farm near Bordeaux. We got to sample this too, and it was excellent, as have been other butters I've tried in France. Like cheese, butter takes on flavor profiles from what the cows eat. 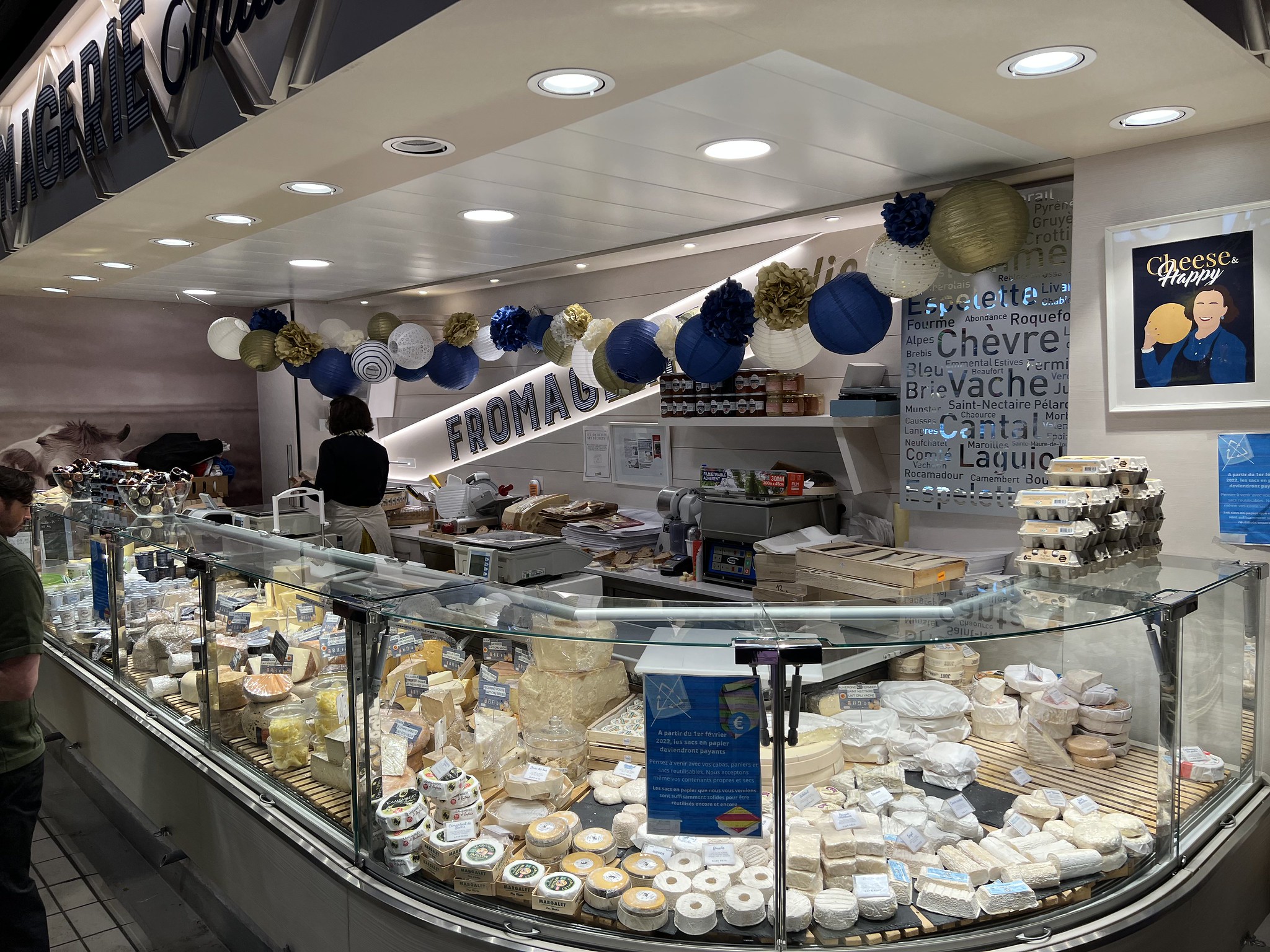 Our local guide, Penny, then took us on a walking tour of Toulouse, stopping along the river for tea and cakes (that she had made), pointing out the mark on a building showing one of the lesser flood levels from the past. 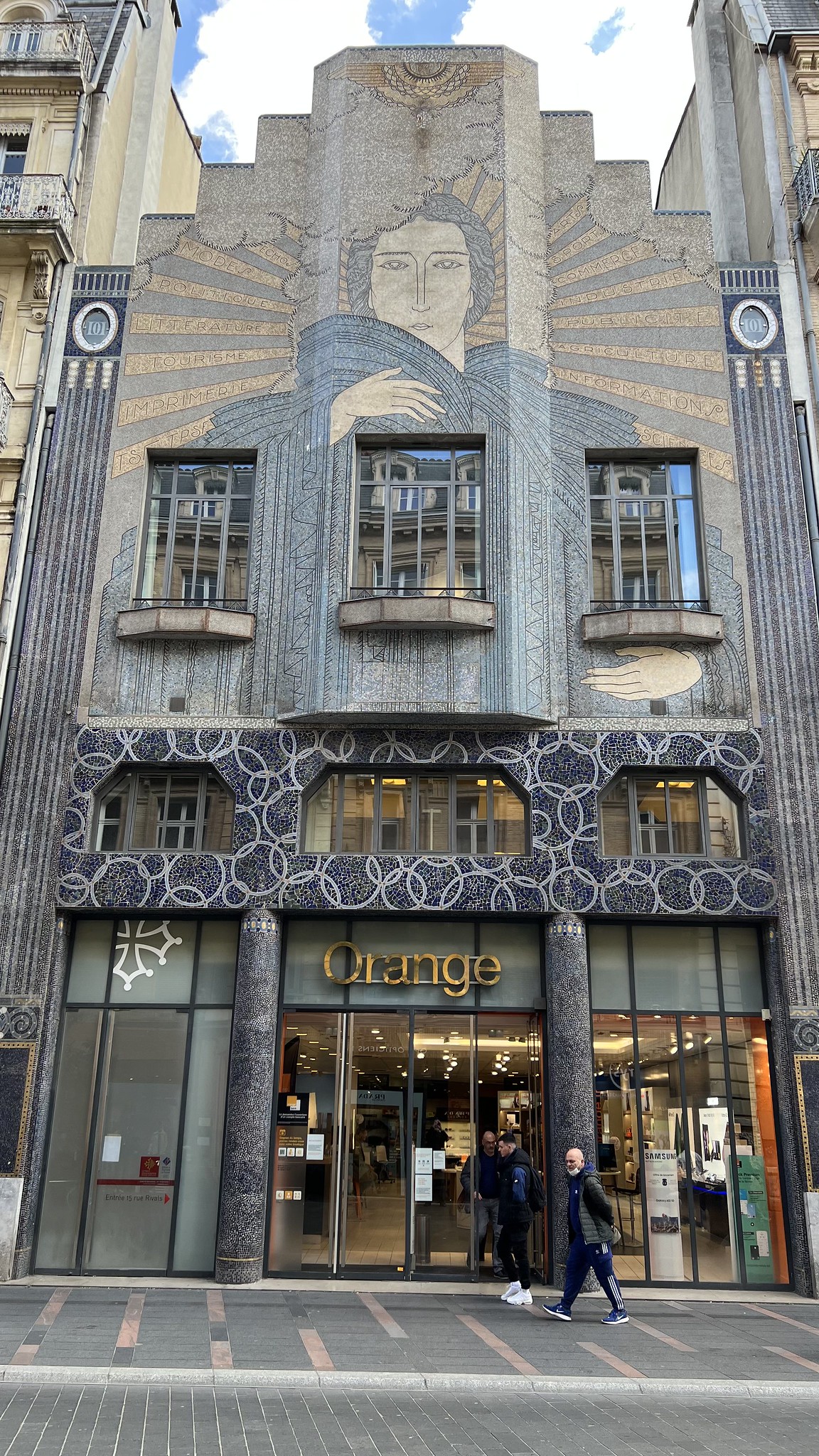 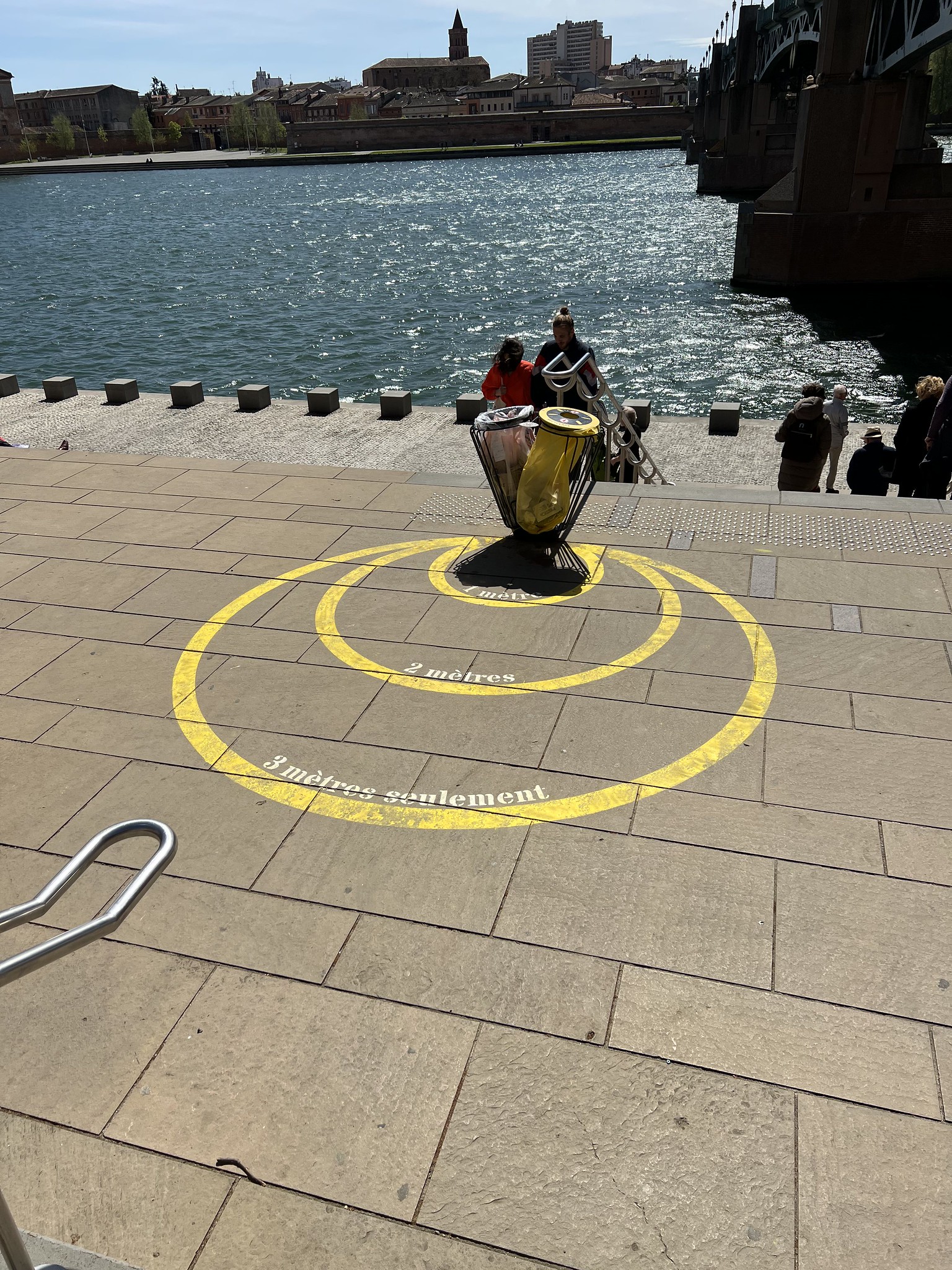 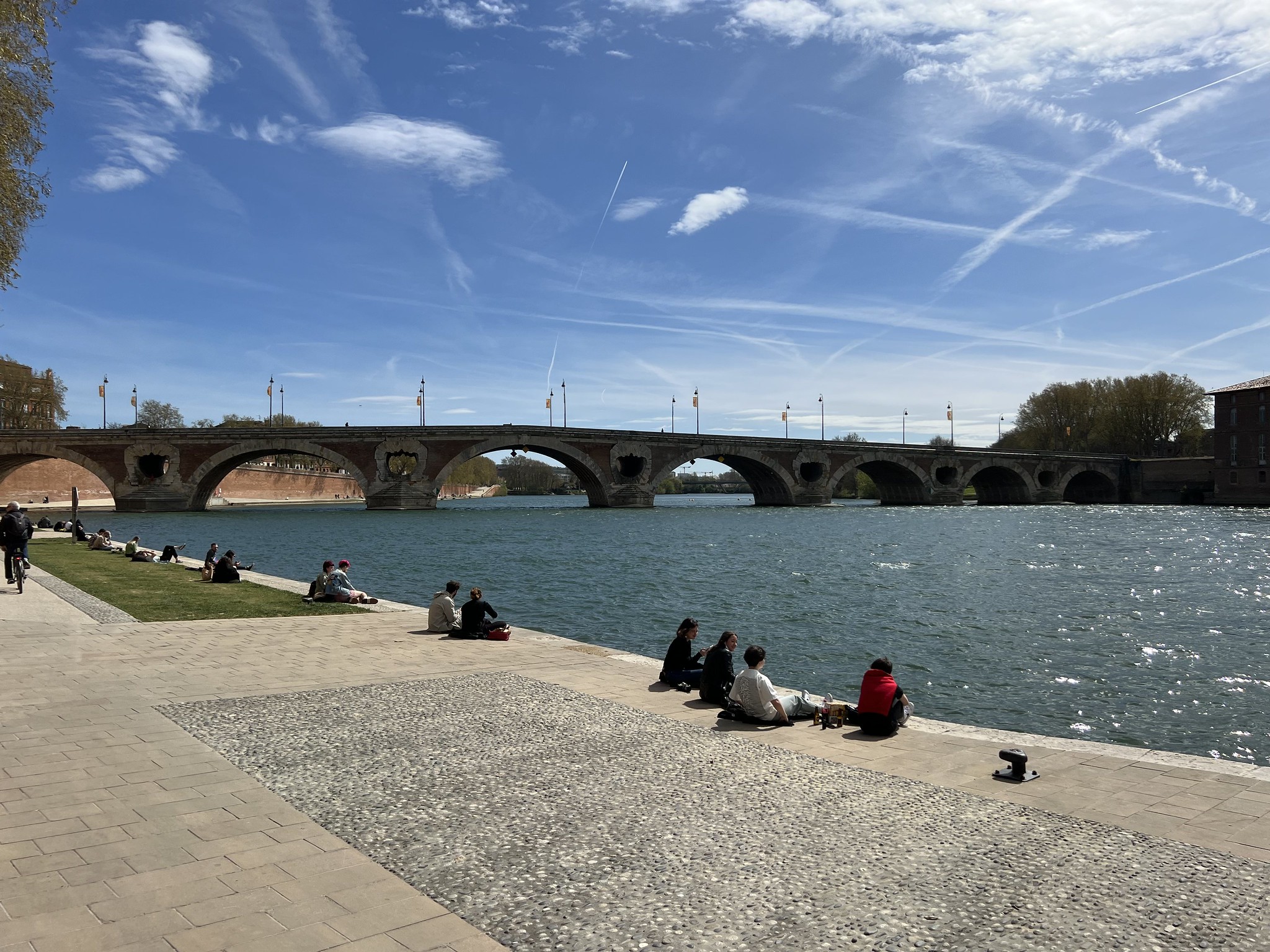 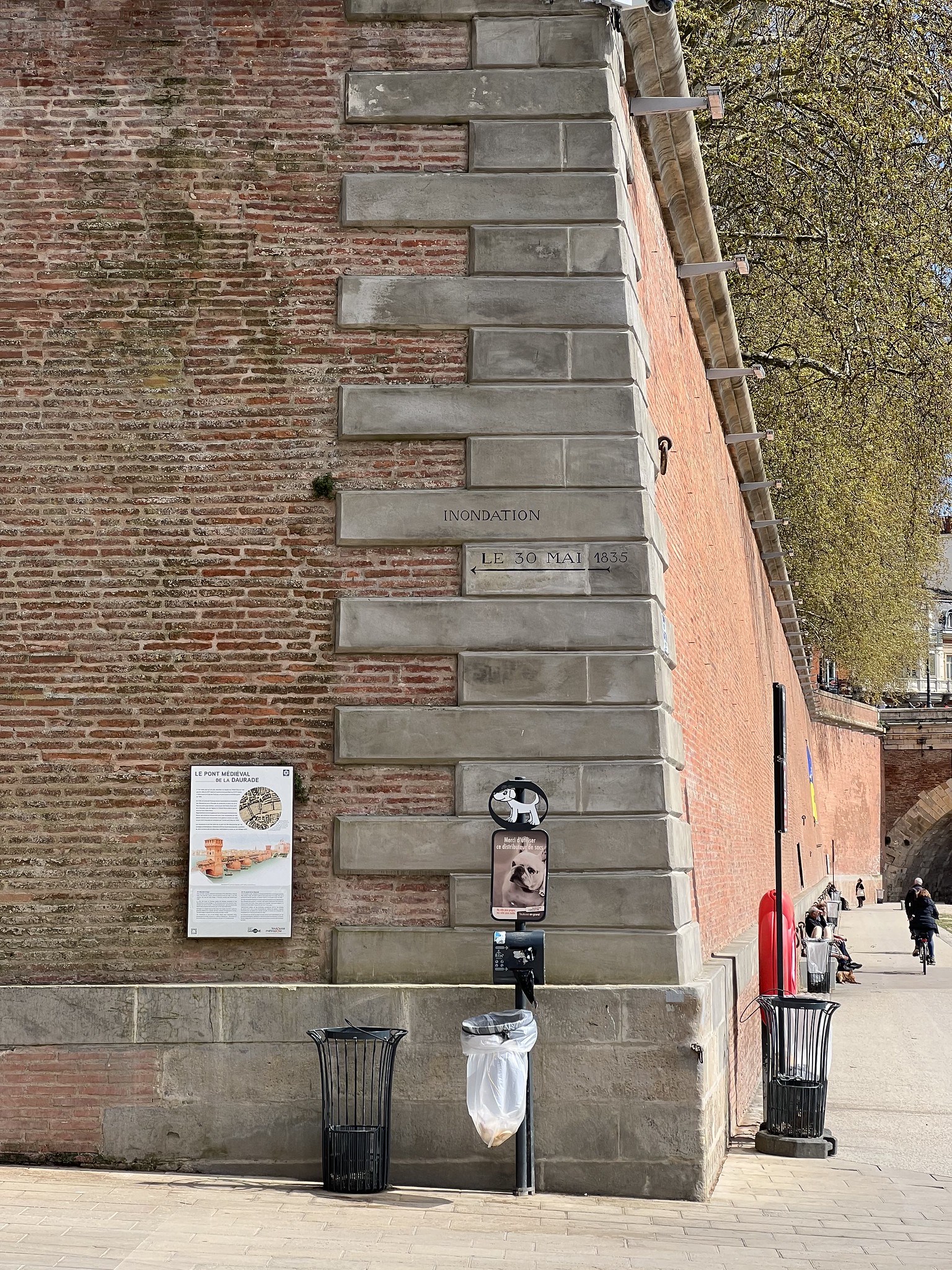 The itinerary had this as a free day in Toulouse. But, earlier, Gingy had been "encouraging" Rob to add in a trip to Roquefort. I believe her words were, "Make it happen!". And so he did. Most of our group (not all chose to participate) boarded the bus for the 2.5-hour drive to Roquefort, where we were to visit the Gabriel Coulet caves and factory. 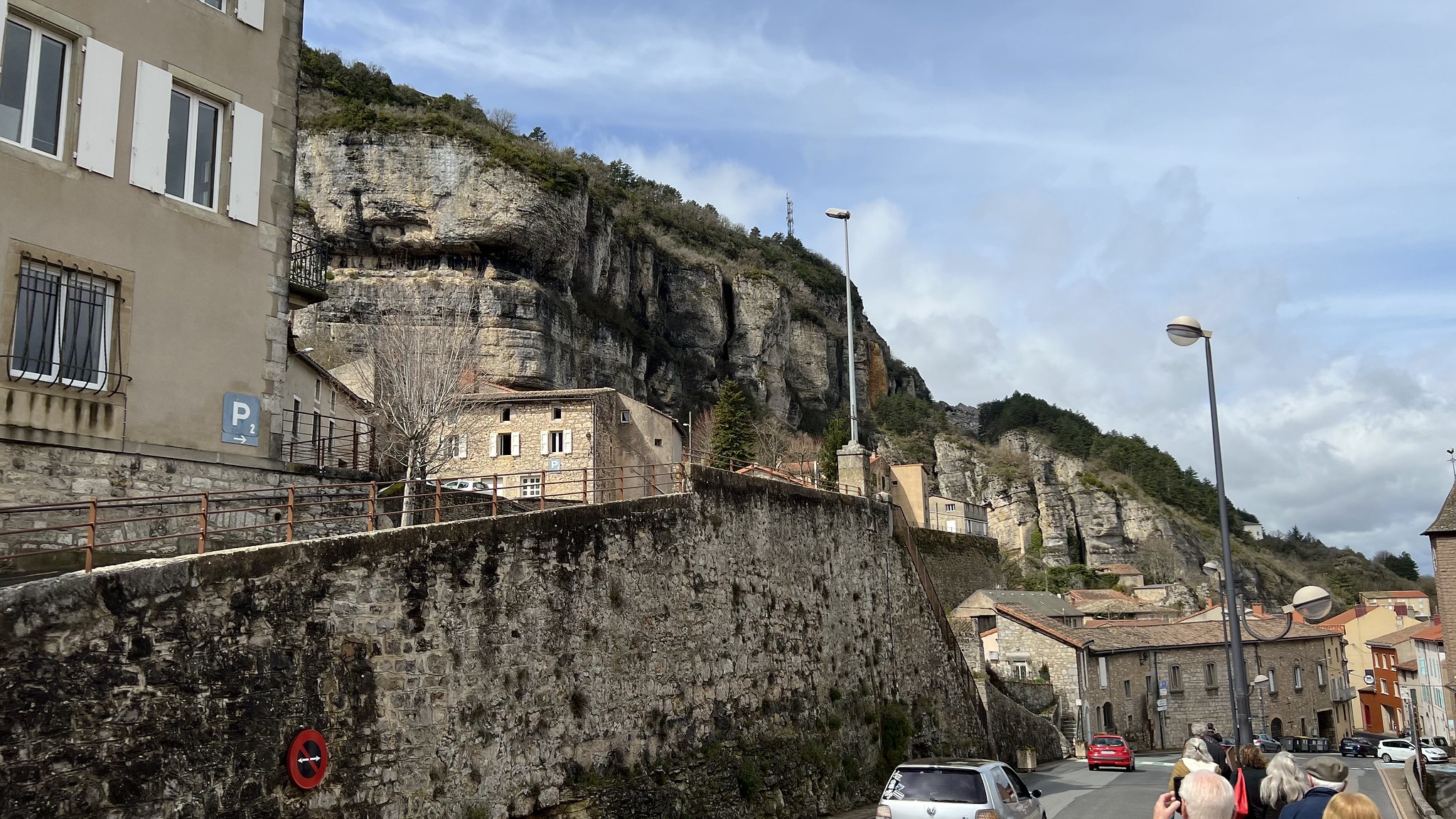 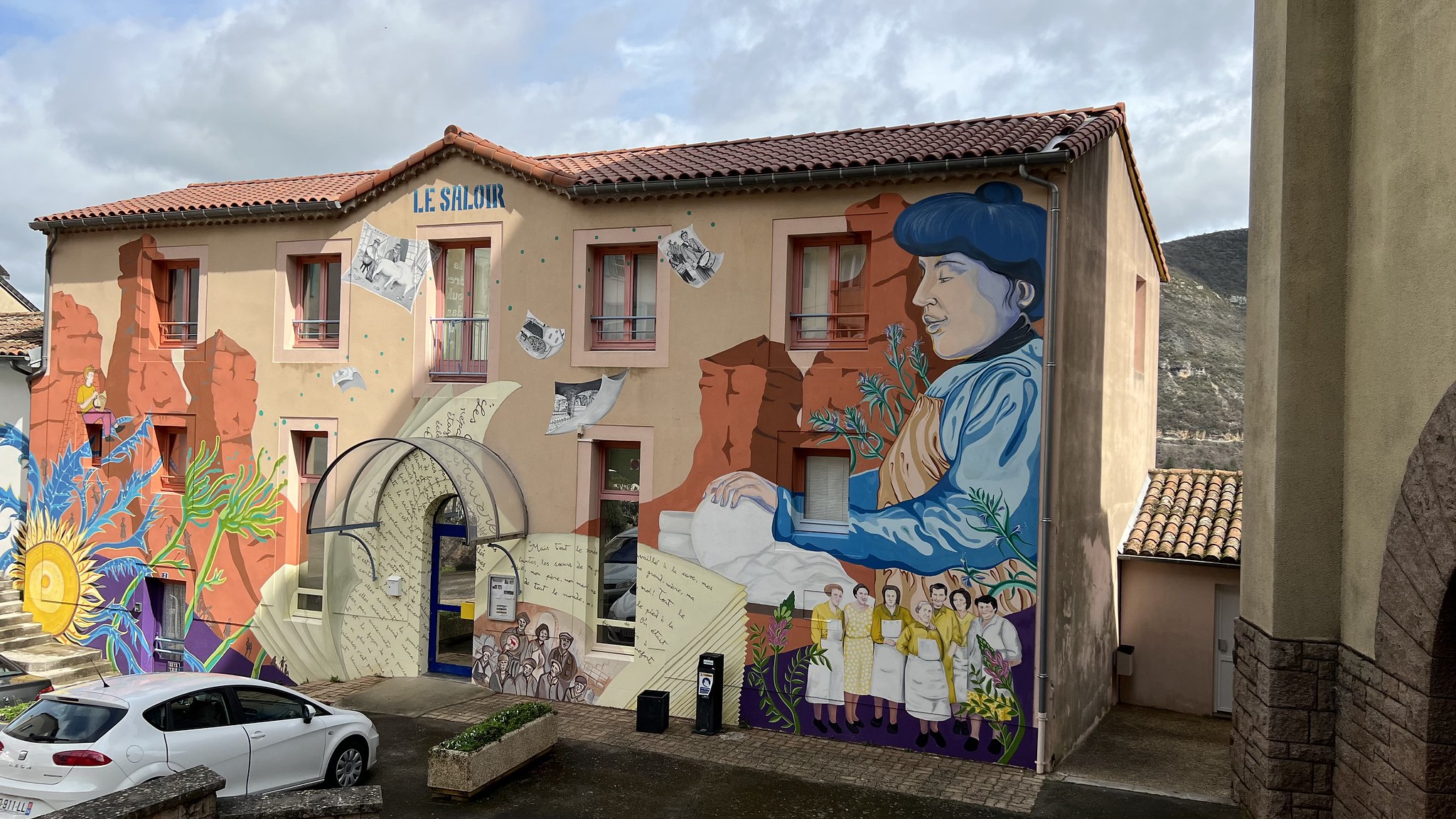 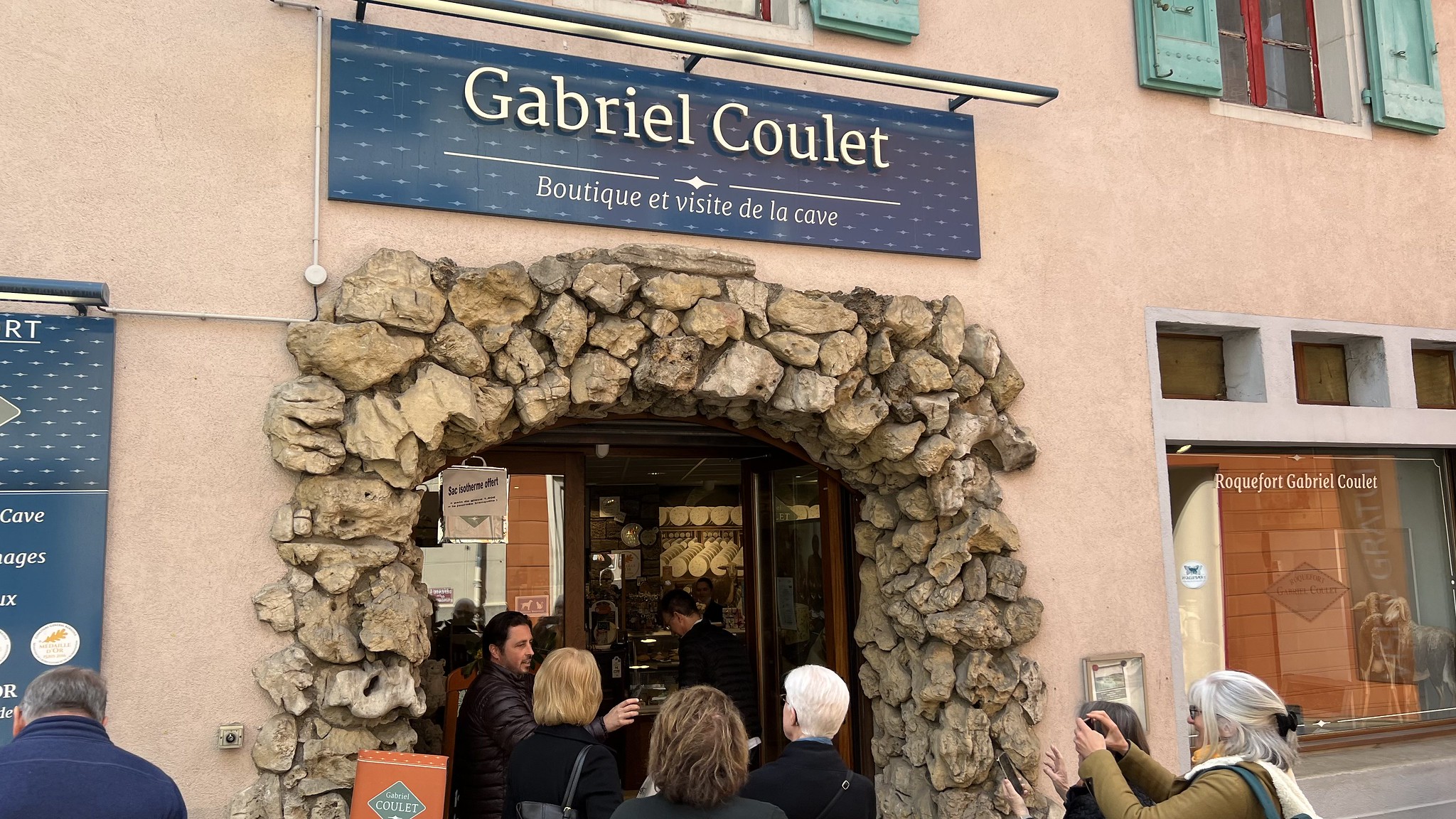 While waiting for everyone to get done with the pre-visit potty break, I was watching a TV in the shop that played a loop of ads for Roquefort cheese (not a specific brand). While they were in French (of course), I could generally make out the content. One that particularly tickled me opened with a party where a young man had just sliced off a hunk of Roquefort cheese and placed it on a cracker. He was about to eat it when he noticed an attractive young woman looking at the cheese longingly, so he did the only reasonable thing and ate it anyway! Just kidding - he gave it to the girl, of course. Cut.. text on the screen says "Two years later...", and we see them enjoying Roquefort together with their cute baby boy.

We were first shown a nicely produced video, narrated by an actor portraying Gabriel Coulet, of how he and his son, while clearing rubble from their wine cellar, discovered a vent in the cliff wall. These vents ("fleurines") were prized for providing the perfect conditions for ripening Roquefort cheese. Abandoning the wine business, Coulet created a thriving cheese business that passed down through several generations. There used to be dozens of cheese makers in Roquefort, but it's now down to seven or so, with Societe having the lion's share of the market. (Darned good cheese, though - we can buy it locally.) Coulet is considered a more upscale brand and they have maybe 3-5% of the market. 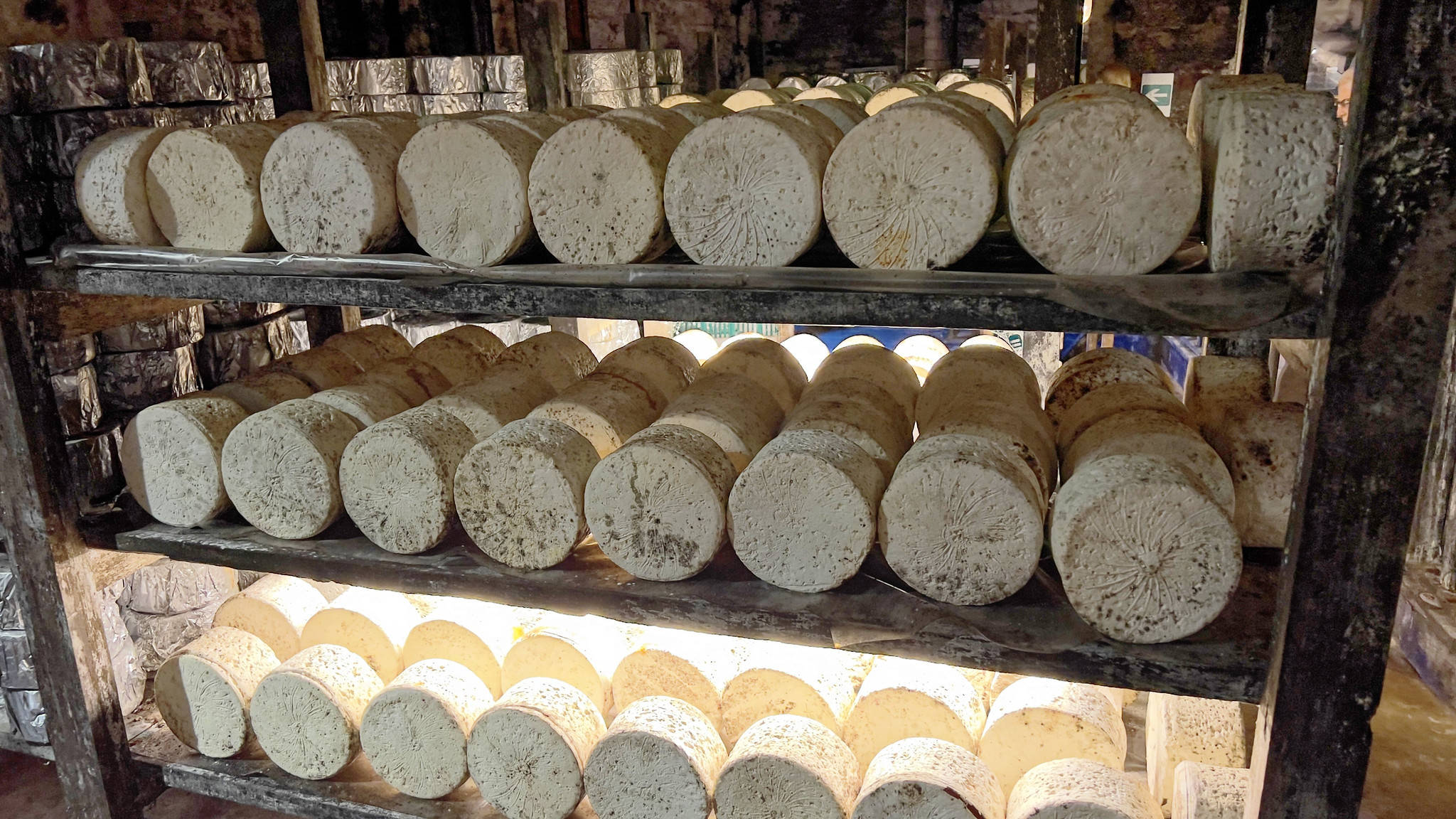 Next we were led down into the caves, cool and humid with water dripping off the rock ceiling and walls. Hundreds and hundreds of wheels of cheese were aging there (we were required to put on protective gowns, hats, booties and of course, masks.) Unlike many modern "visitor tours" where you're led past windows into the operation, we were right in the middle of it and could touch the cheeses if we wanted to (but of course didn't). We were then shown the "fake cheese" room that illustrated how the ripening used to be done, on wooden boards (rather than plastic crates). The cheese wheels there were just models for illustration. We then had a tasting (with wine) of the various Coulet cheeses, right in the caves. 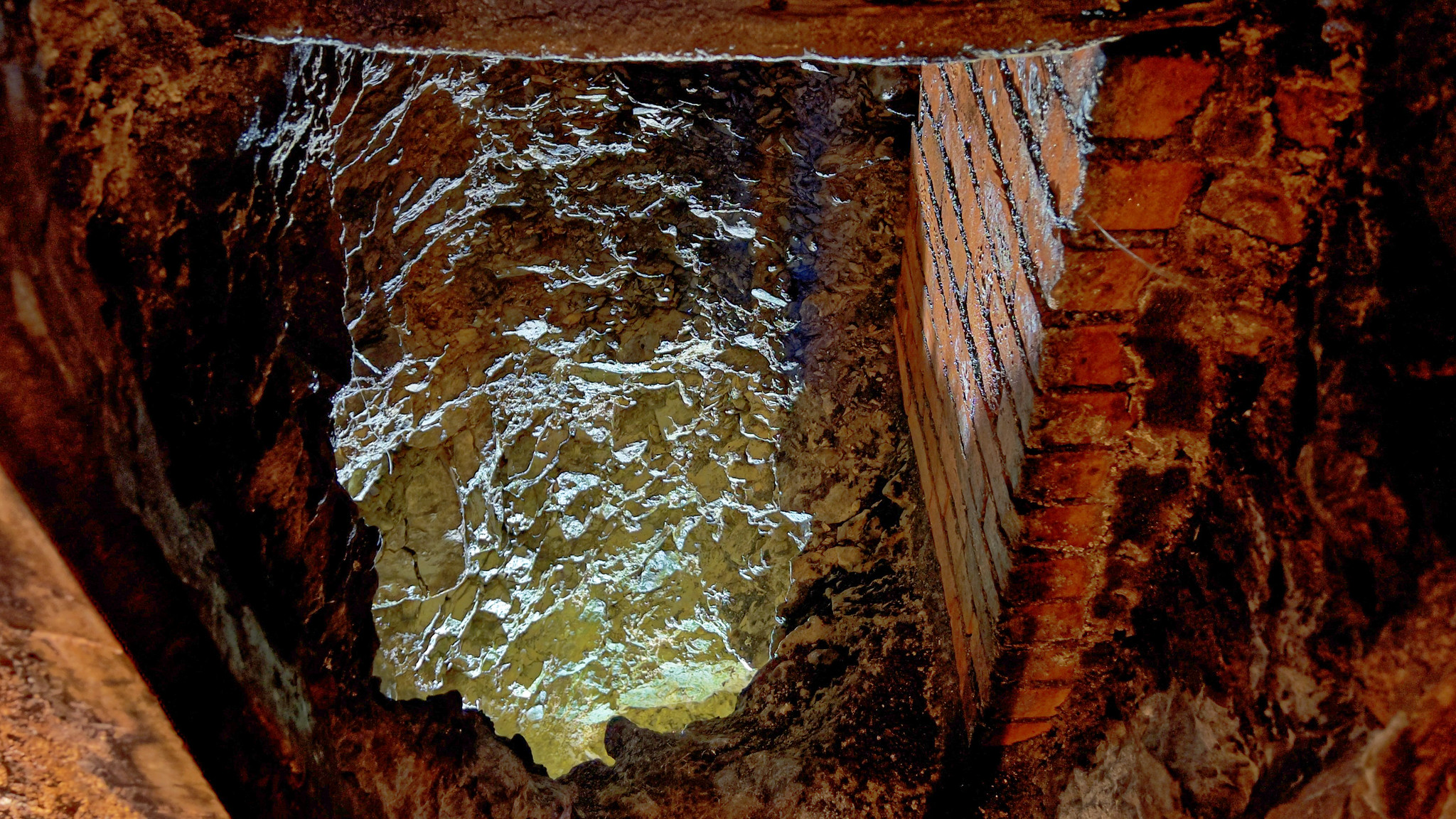 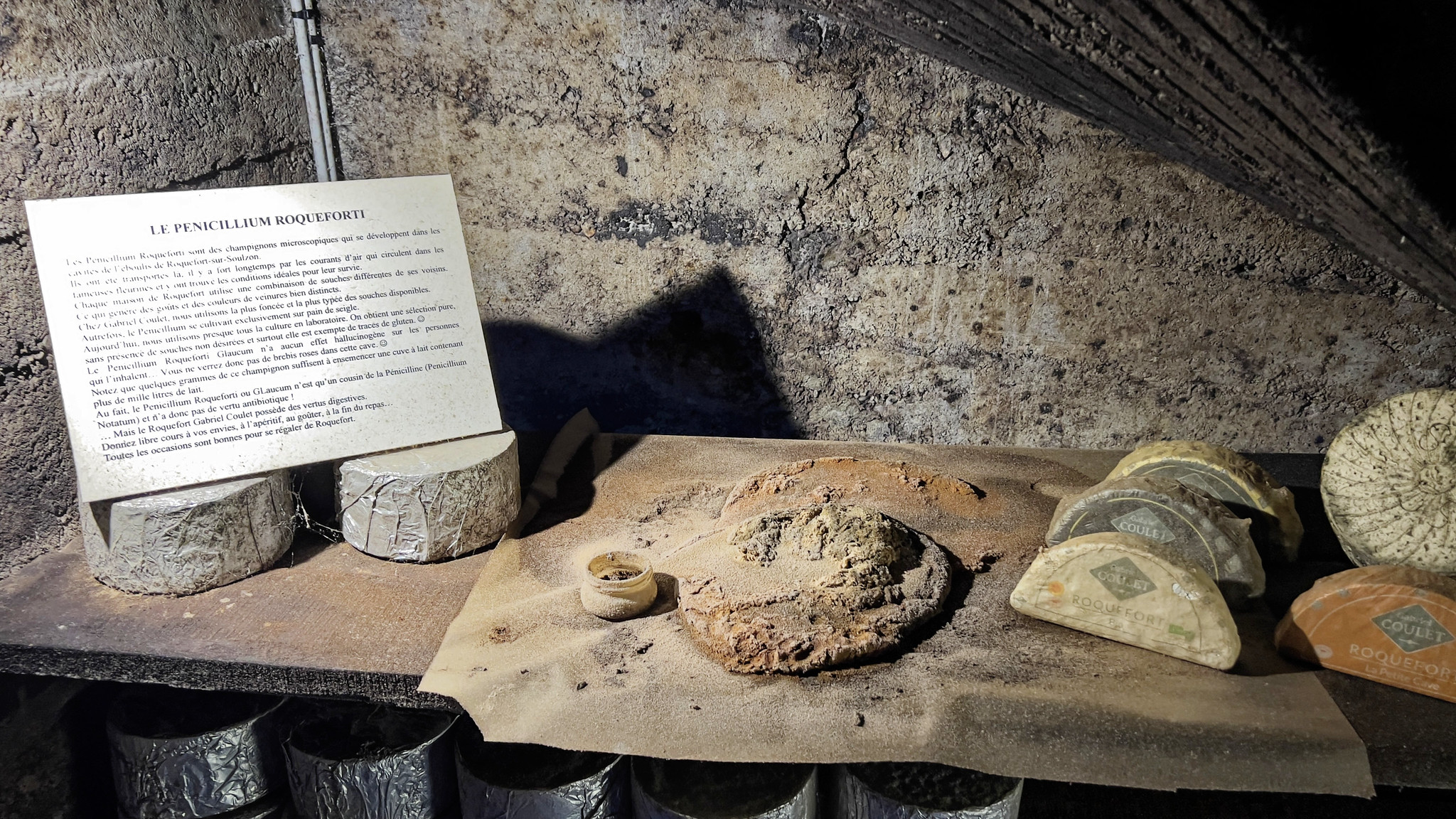 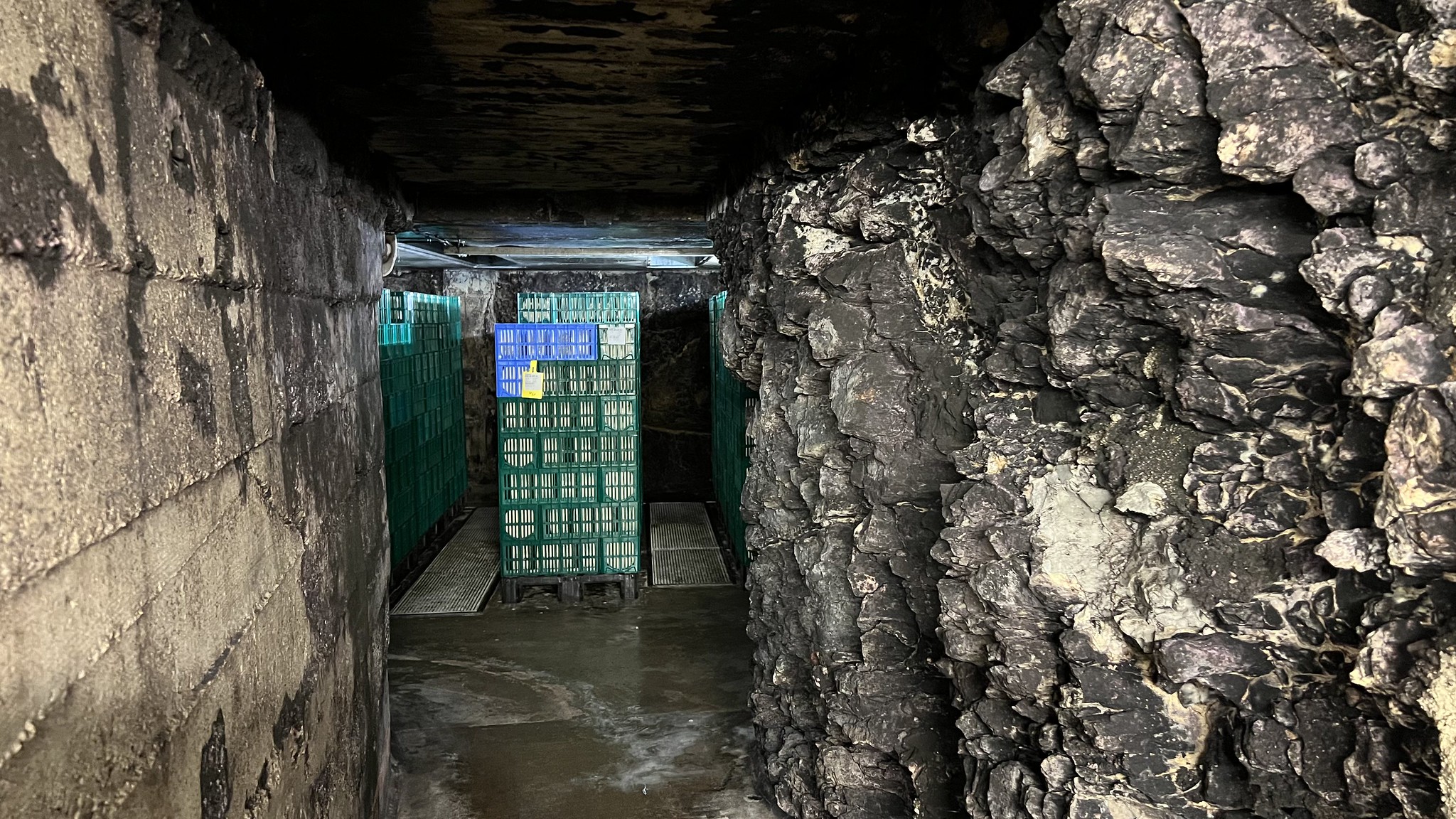 After the caves tour, we had a pass through the shop (of course), where many kinds of Coulet cheese were for sale, including some not exportable to the US. Next, it was on to the Coulet plant nearby where the group was fed a delightful lunch. Last was a tour of the cutting room, where lasers and precise scales were in use to ensure that each wheel was cut into wedges of the exact required weight. 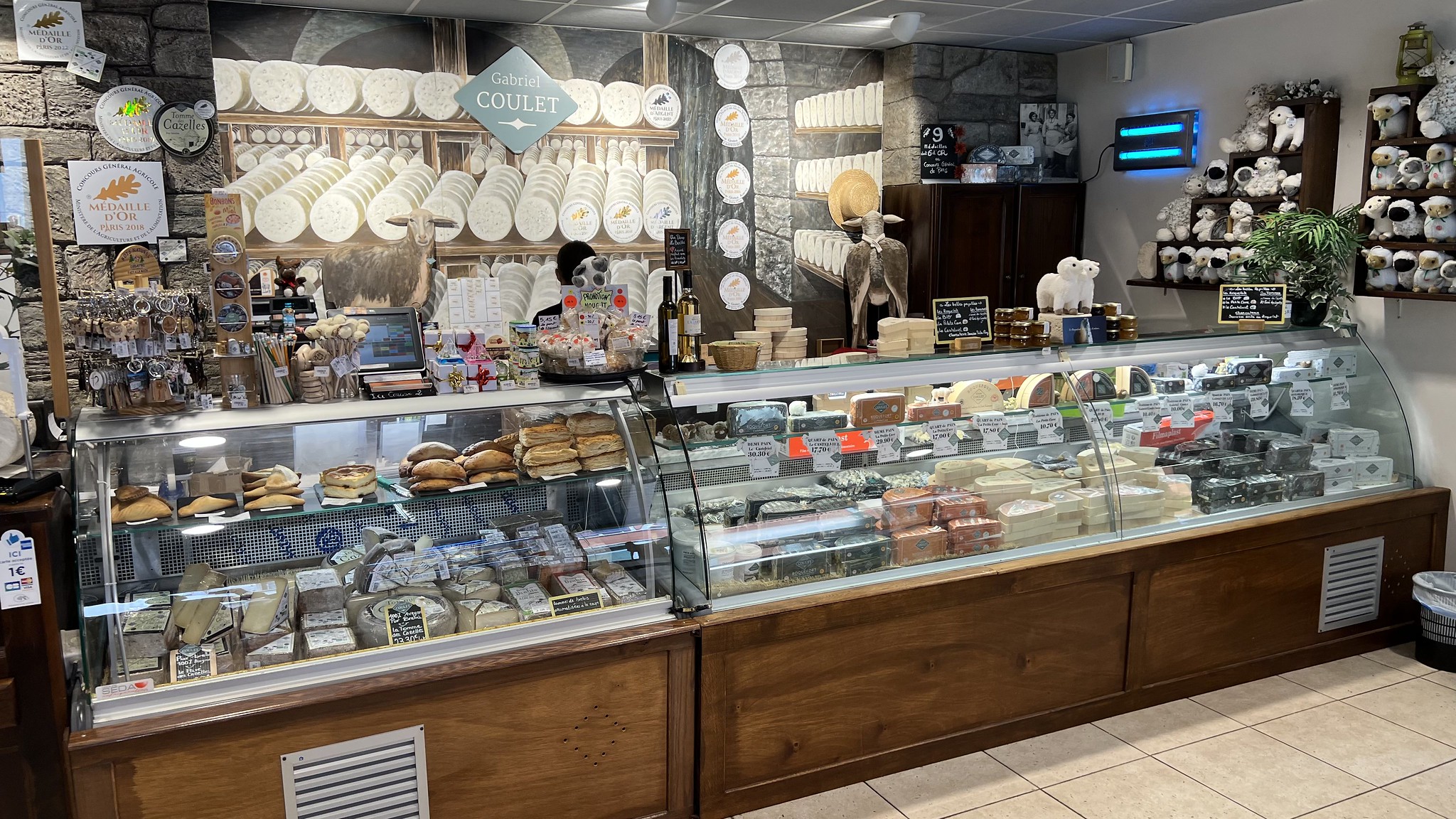