While the other couple embarked on an optional tour of Ravenna, we booked a food tour in Bologna. Our guide Luca, a popular name in Italy as you will see later, started with a presentation of Bolognese specialties, almost all of which we had tried the day before, to his dismay. We got to sample Bologna-style lasagne, which is different from what we get in the US, as well as a mixture of small meatballs with peas in a sauce. Luca then led us on a walking tour, showing us some things we had not previously seen. We stopped at a restaurant in a busy area and tried tortellini cooked in broth, a local specialty. This was very good, but both of us were rather full and weren't too interested in many more tastings, There is always room for gelato, of course, and Luca brought us to a place that made the creamiest and most flavorful gelato I had ever tried. 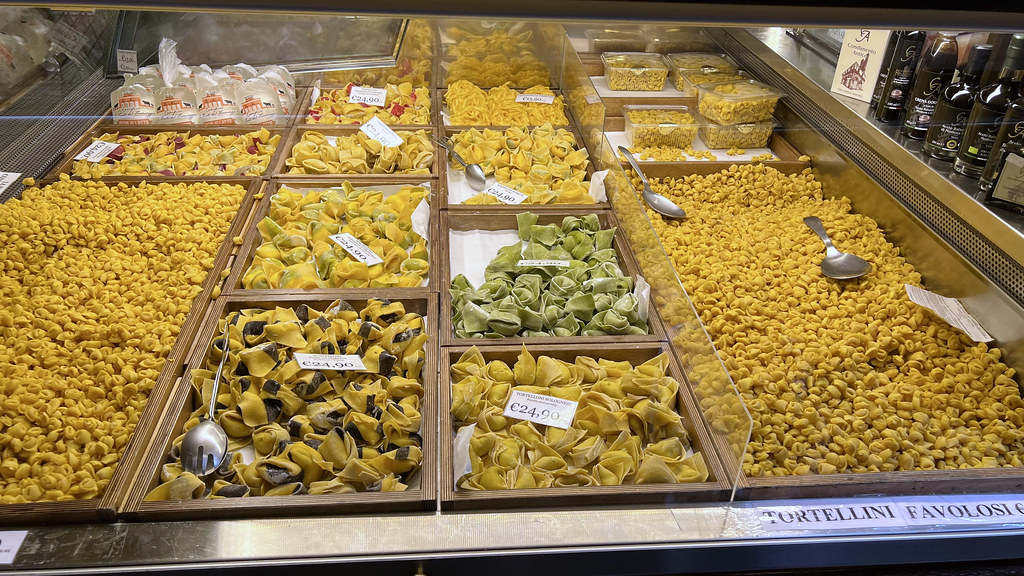 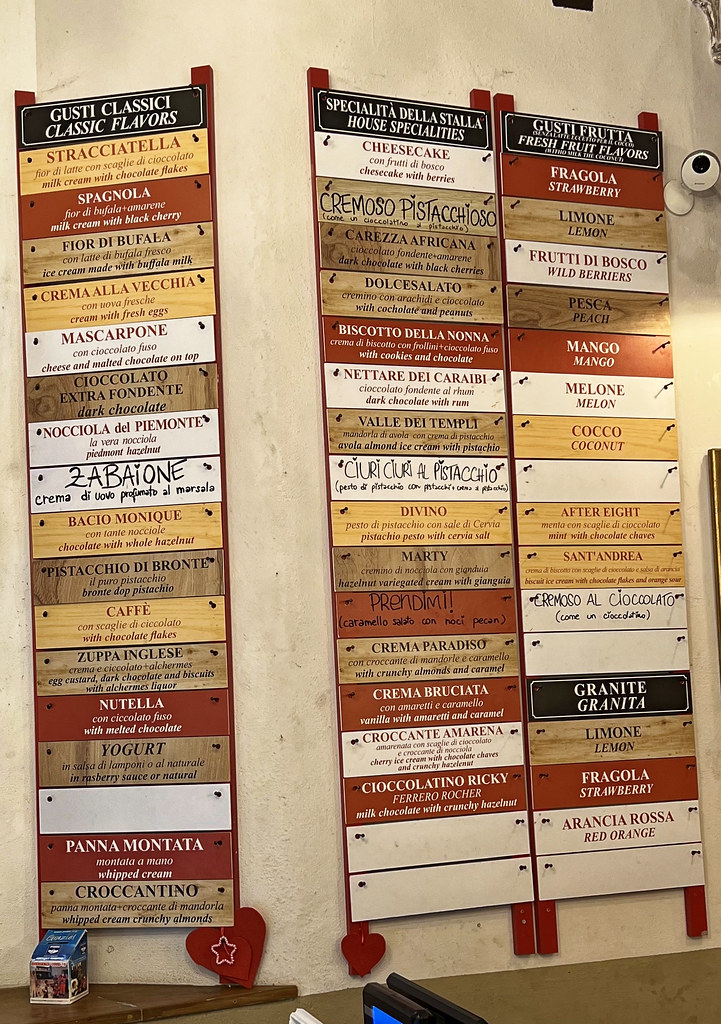 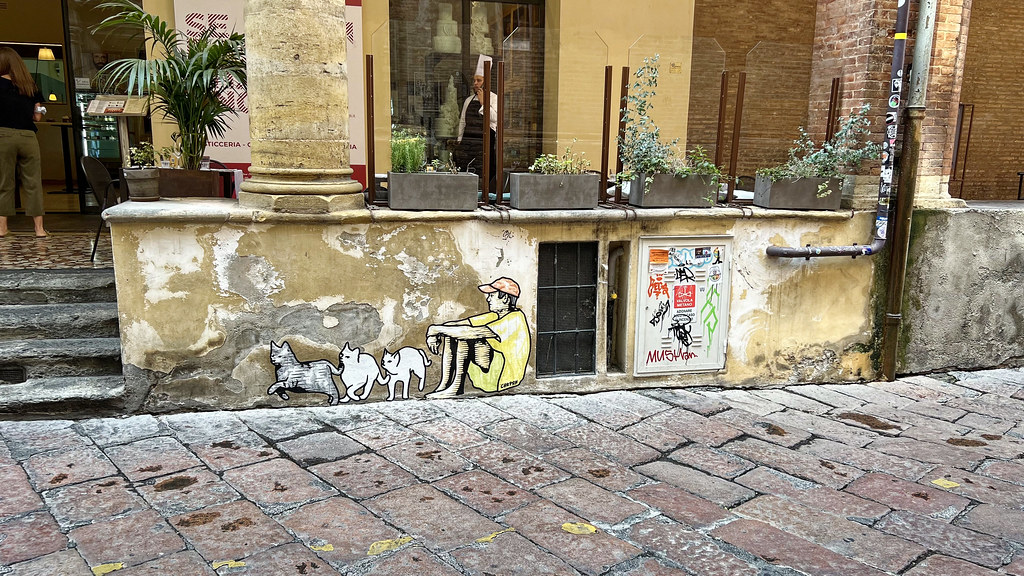 In the afternoon, we decided to take a tourist train up to the Sanctuary of the Madonna of San Luca, high on a hill overlooking the city. We climbed up a narrow and steep stone staircase to the top level where one could get a nice view of the city. 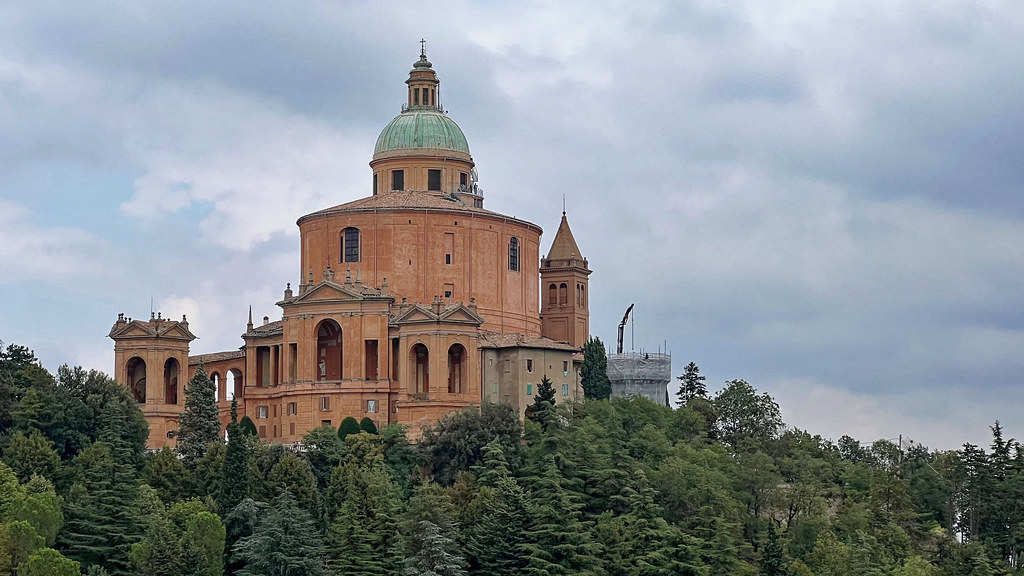 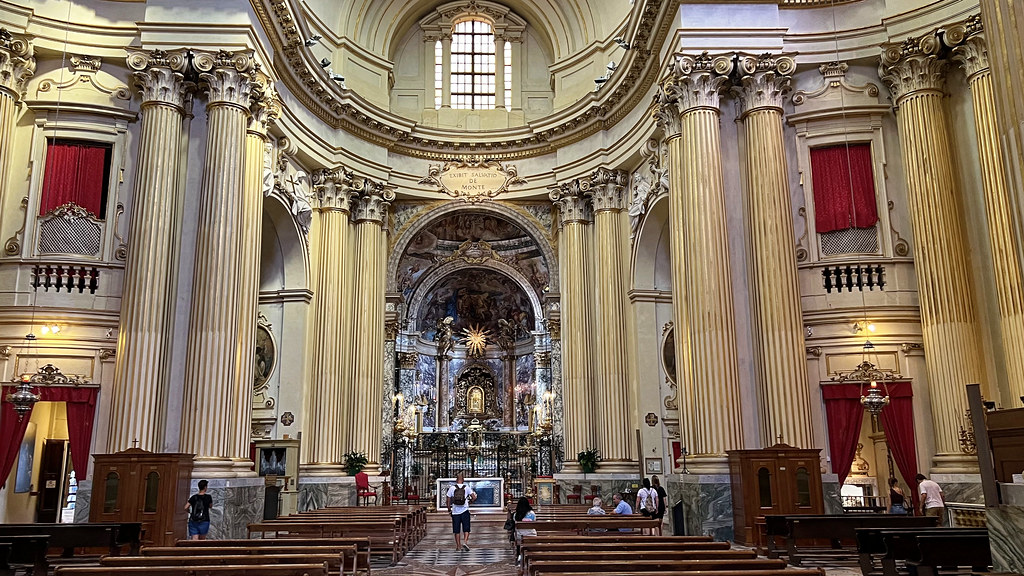 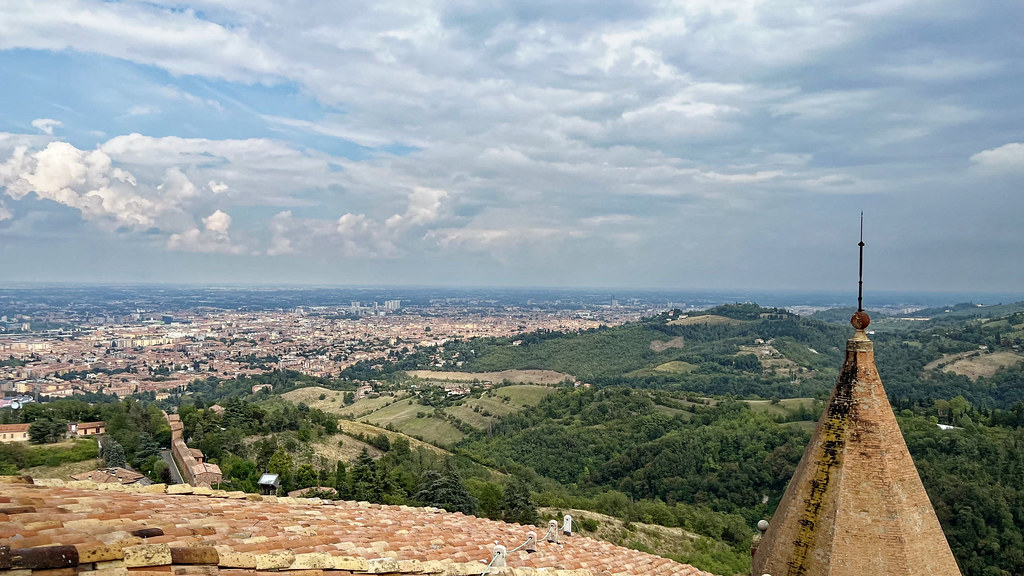 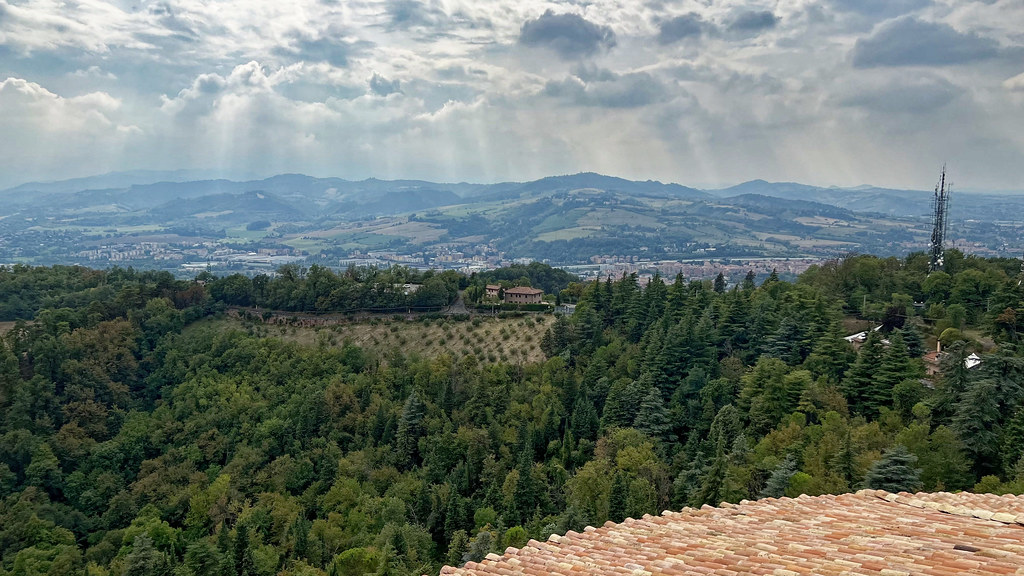 We had to leave the hotel at 7AM, which made a bit of hassle since breakfast didn't open until 6:30, but we made it. Our first stop on the way to Parma was at a Parmigiano-Reggiano factory where we were led through the process of making and aging the cheese, starting with the cows and ending in an aging room with thousands of wheels of cheese. We were shown how inspectors test wheels for air bubbles by rapping them with a wooden hammer and listening for the sound. The first quality wheels have no or minimal bubbles. I could hear the difference in some examples. The copper-lined vats where fresh milk was heated and stirred to form curds, then the curds gathered into cheesecloth and lifted into plastic forms, all within an hour or so, was fascinating. 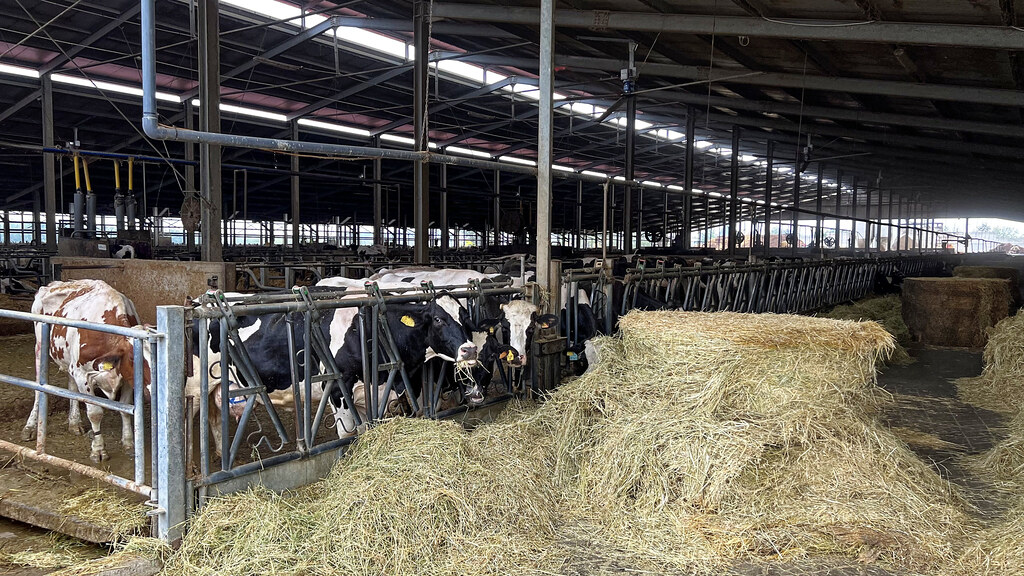 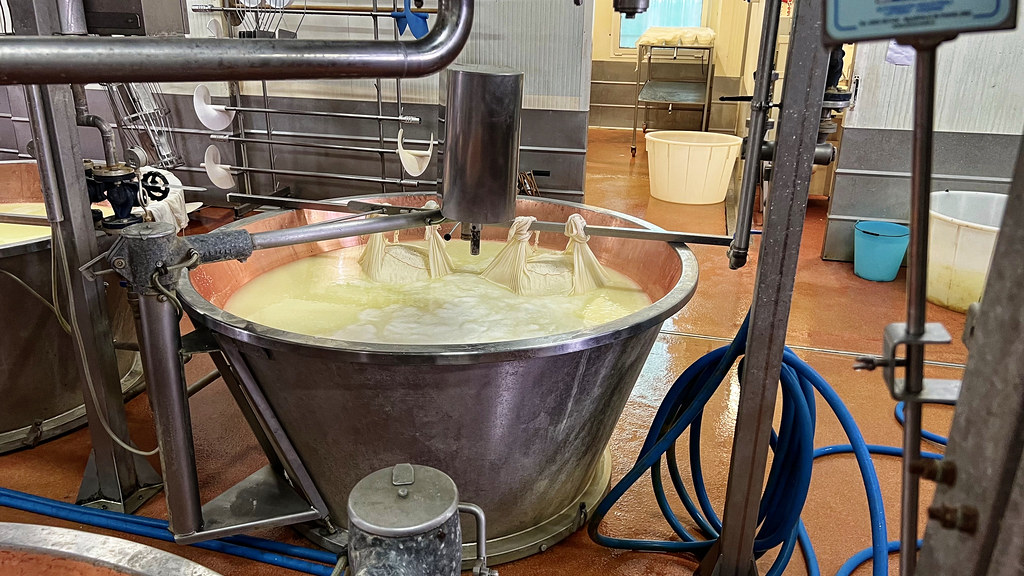 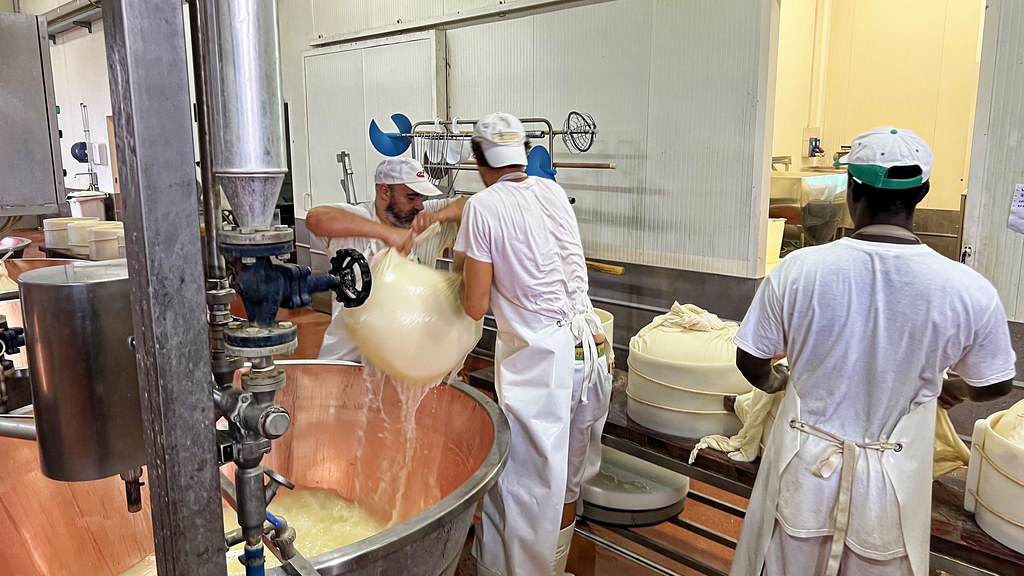 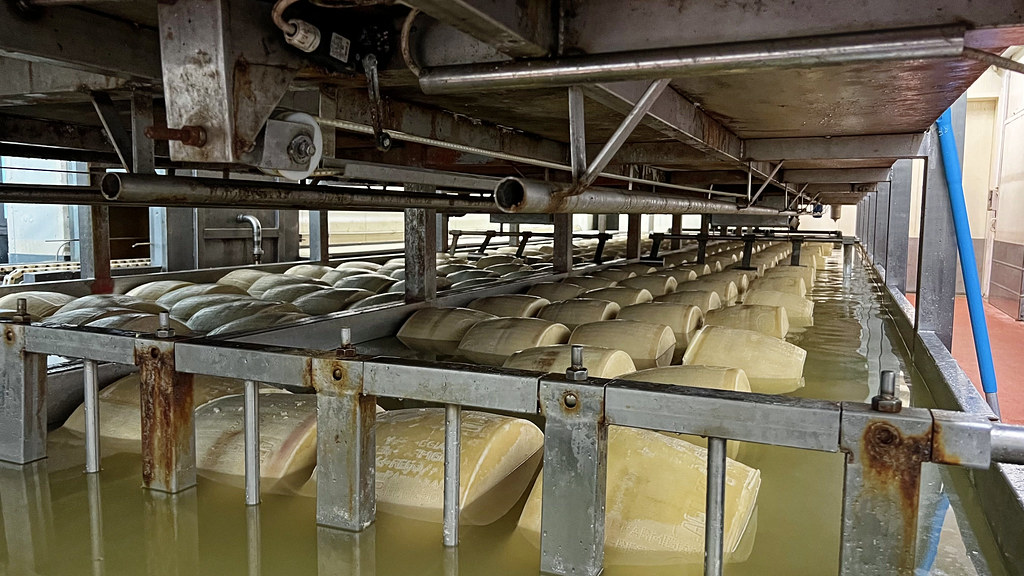 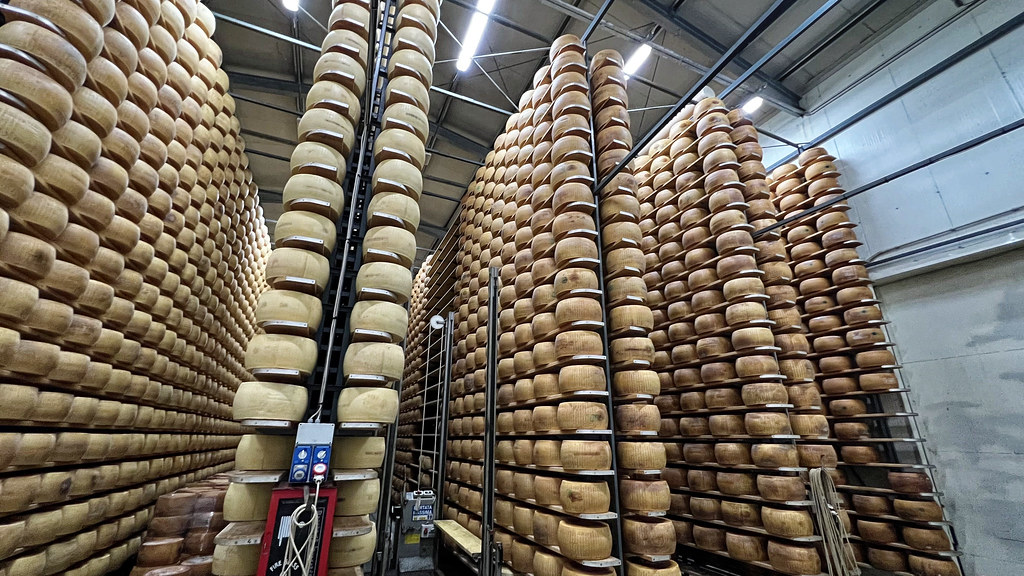 We then had a tasting of 12, 24 and 40-month aged cheese. As it ages, the cheese becomes harder and the calcium nodules more prominent. I was teased a bit for preferring the 12-month cheese, as the official line is that the 24-month is the sweet spot, but I know what I like. The 24 was good too, though. We were encouraged to taste the cheese with drops of balsamic vinegar, honey or jam. 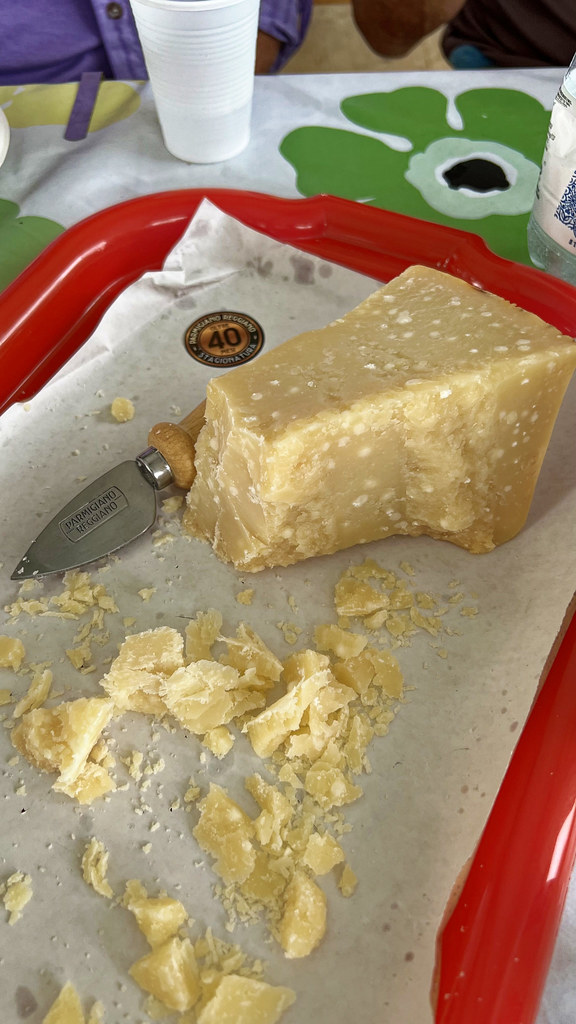 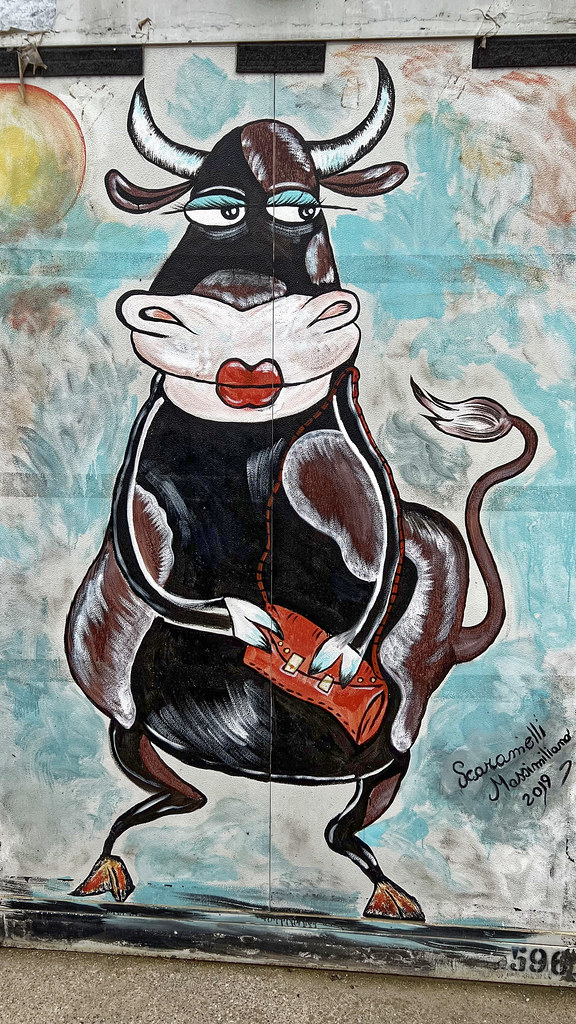 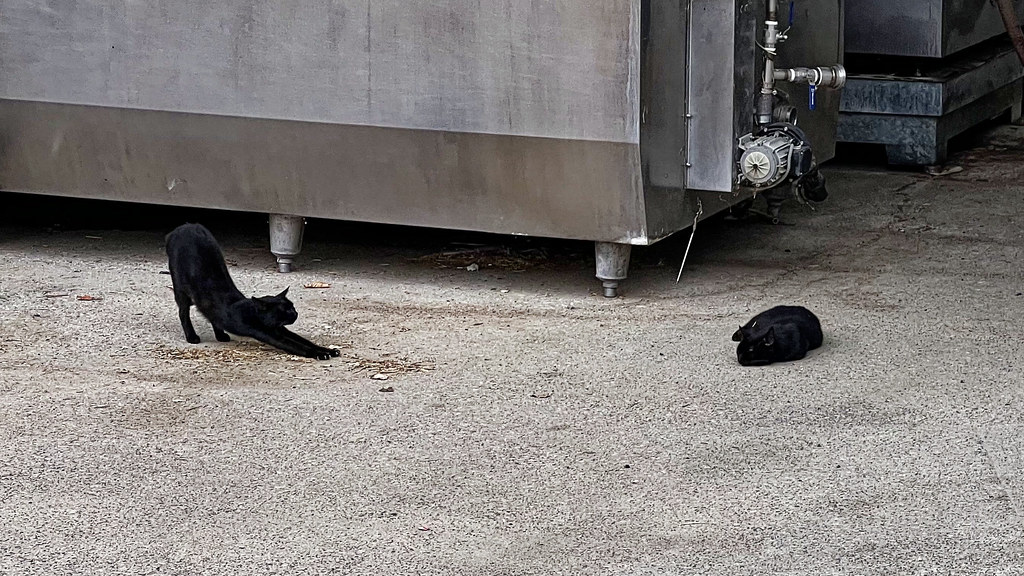 And, speaking of balsamic vinegar, our next stop was to the vinegar maker Pedroni in Modena. While I like and have used balsamic vinegar, I had no idea how it was made or what distinguished the various styles. We were led through the process, starting with cooked grape juice (before it starts fermenting), aged in barrels made of oak, juniper, chestnut, cherry or mulberry. Unlike with wine, where new barrels are constantly rotated in, balsamic vinegar prizes the oldest barrels; one we were shown was more than a hundred years old. 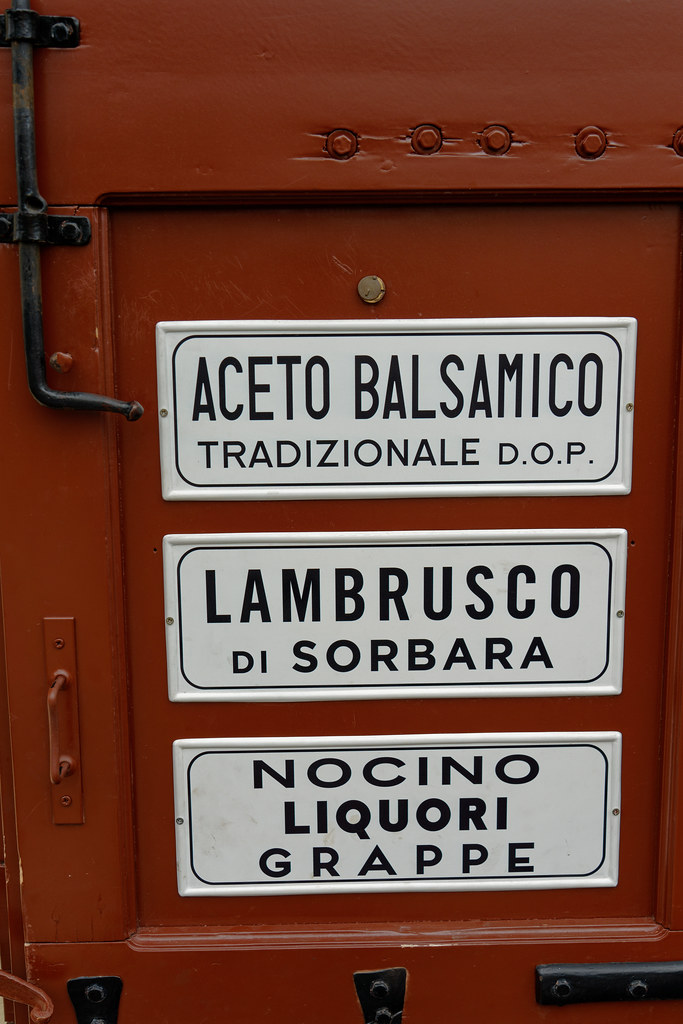 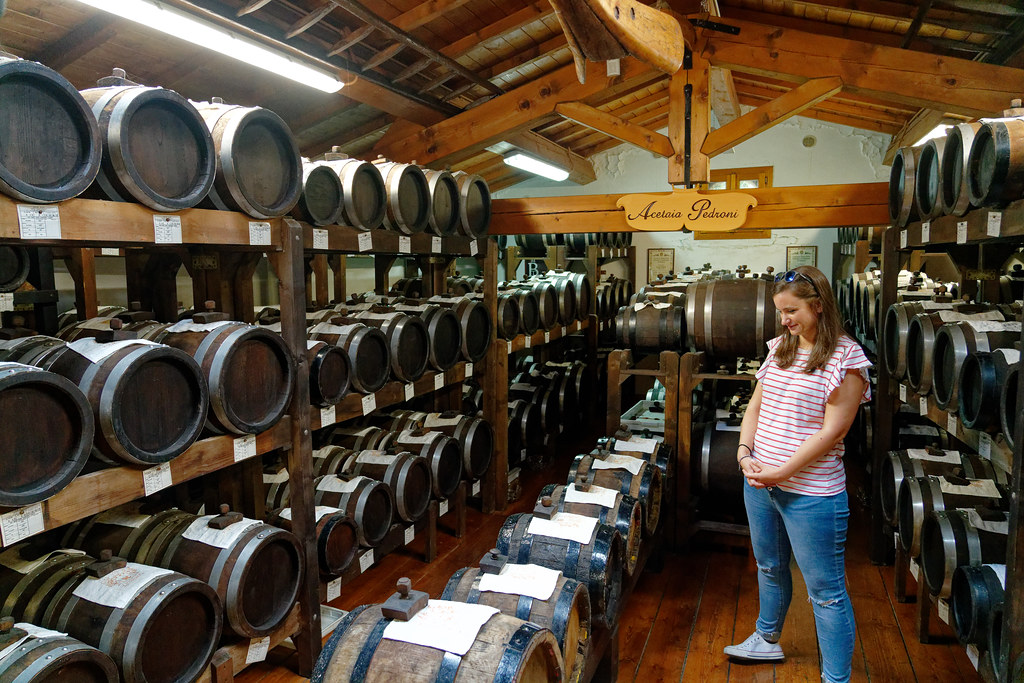 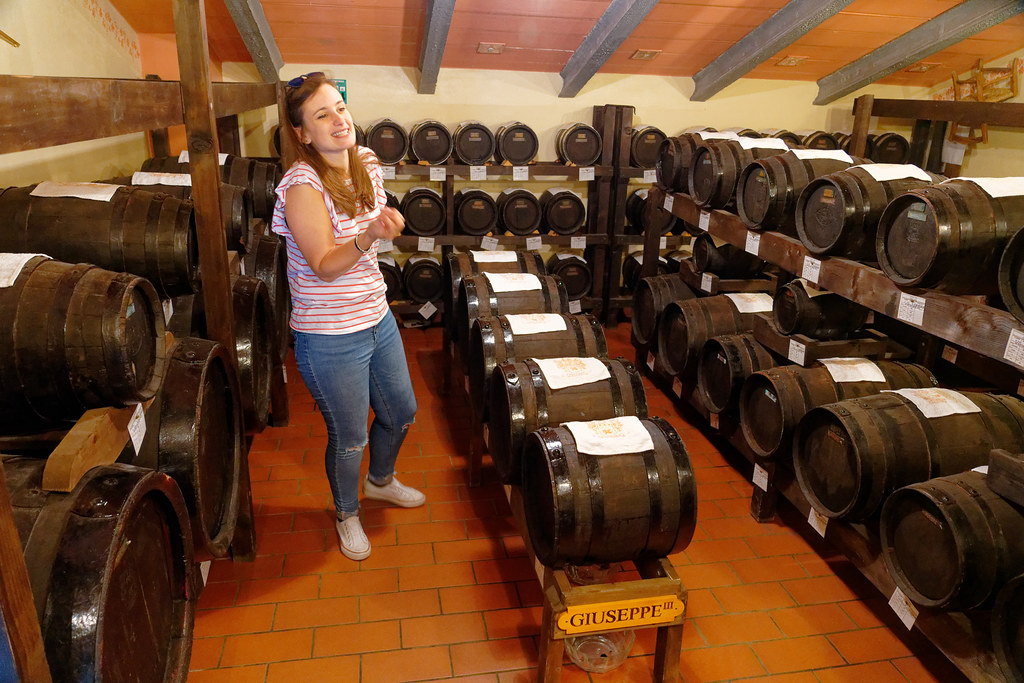 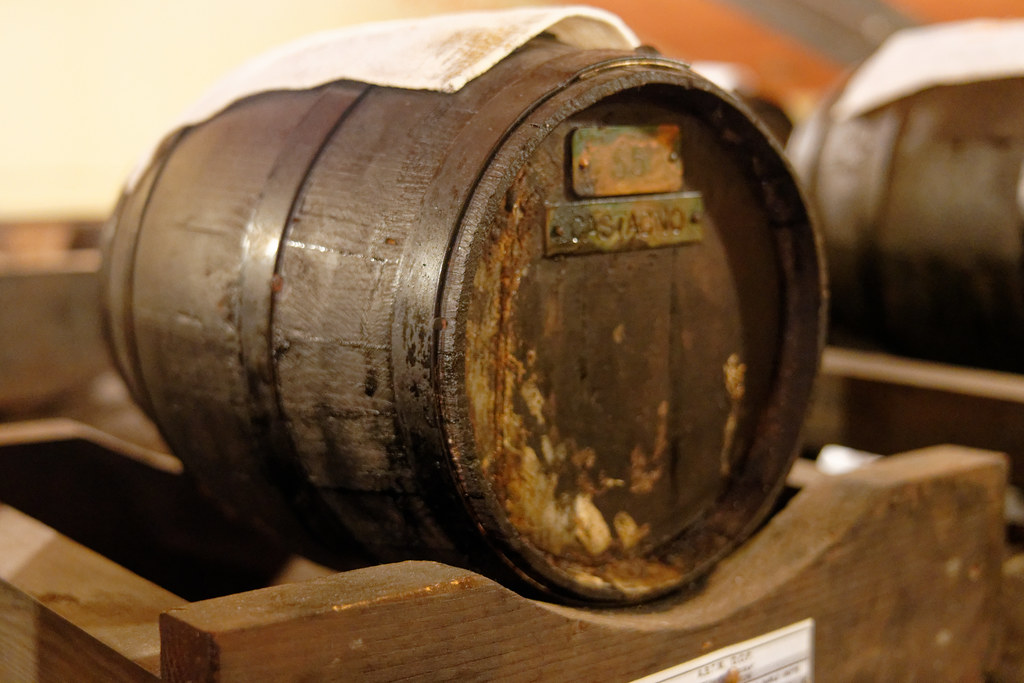 The typical balsamic vinegar you buy in the grocery store is fine for cooking and salads, though some is better than others (we buy an Italian version from Costco). But "Traditional Balsamic Vinegar from Modena" is something else entirely. It is aged a minimum of 10 years, as much as 50 or more, and must pass certification in Modena to be able to be labeled as such. Traditional is put up in tiny 100ml bottles and you use just a few drops at a time. We sampled some and it was out-of-this world. We bought and had shipped two bottles, one aged 25 years and one aged 50 years in cherrywood, along with a dozen jars of a cherry preserve, made with balsamic vinegar, that we adored. 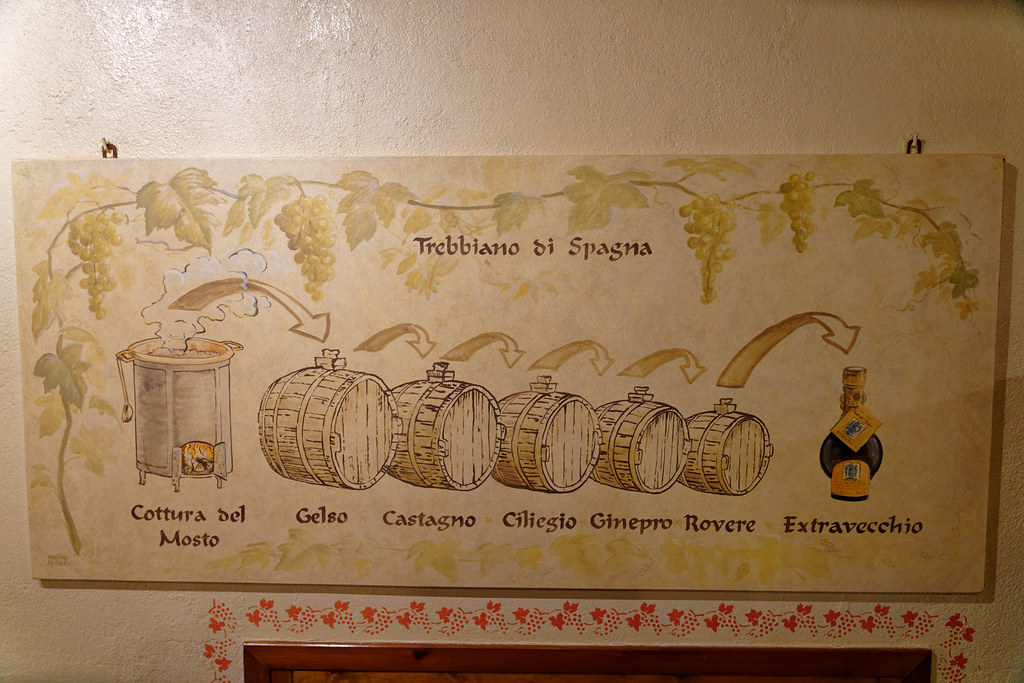 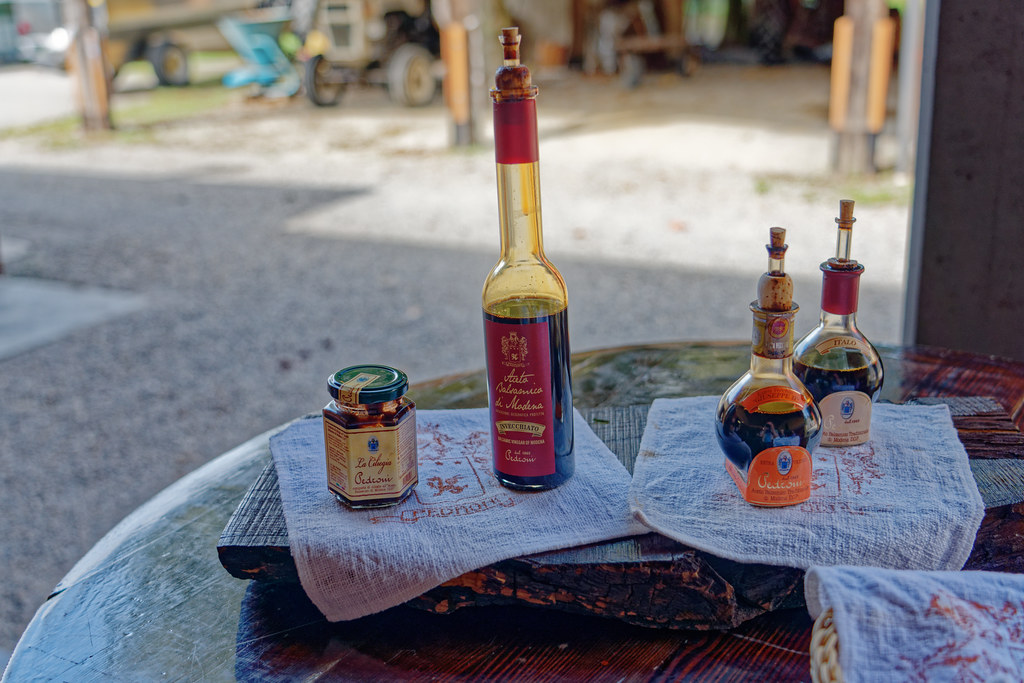 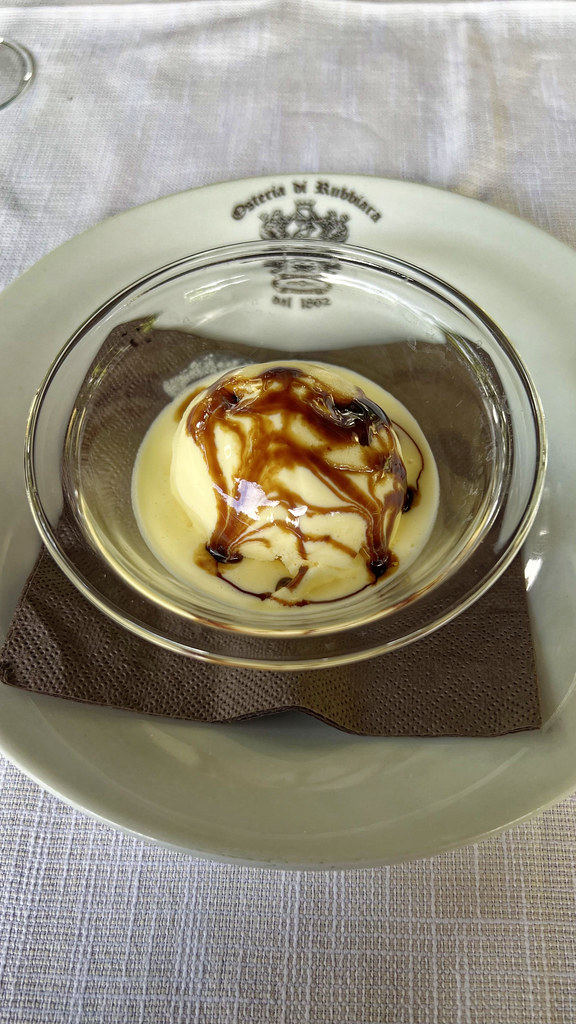 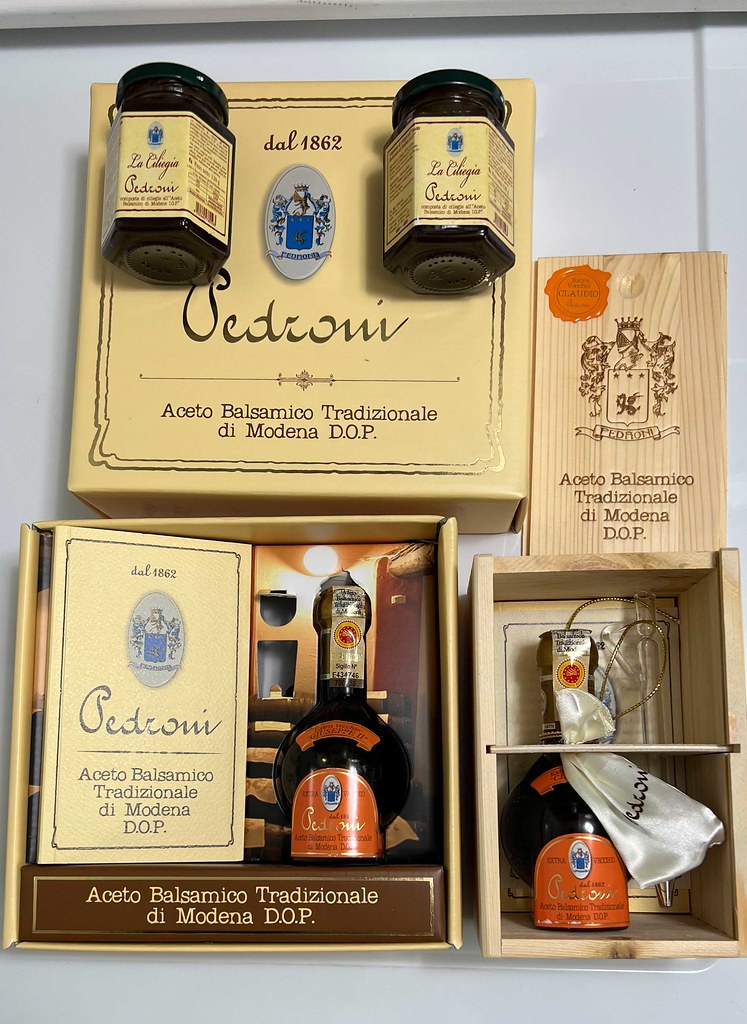 Then it was on to Parma, where we checked into a "five star" hotel that used to be a Barilla pasta factory. While the hotel was very fancy and modern looking, our room was a usability disaster. Multiple light switch panels did nothing, replaced with an inscrutable panel with buttons that took us over an hour to figure out what each one did (and at least one seemed non-functional.) The bathroom looks nice, but don't open the door while someone is on the toilet or you'll bash their knees, and the TP requires contortions to reach.