This trip, the last of those rescheduled from 2020 and 2021, did not start in an auspicious manner. We arrived at the Boston airport gate in plenty of time. There was an announcement that, due to an equipment change, those who had reserved "Premium Select" would be downgraded because the plane we were flying didn't have that class. This didn't concern us as we were flying "Delta One", or business class.

I wondered why the plane was not at the gate when FlightAware showed that it had landed more than an hour ago. It was then announced that while the plane was at the airport, it was at the domestic terminal having arrived from Atlanta, and the airport authorities were not allowing it to be towed to the international terminal. We were told it would be a half hour delay. Then there was a gate change announcement, with the airline having been told a different gate was open. It wasn't - a flight to Paris hadn't begun boarding there yet. It finally did board, but didn't push off for a while. Eventually our plane arrived and we boarded, but we ended up taking off three hours late!

Even though we had allowed almost three hours for our connection, we missed it. We were told that everyone with connections was being automatically rebooked and to see the KLM agent when we arrived in Amsterdam (where we were to connect to Bologna.) When we got there, no agent was to be seen. Eventually an agent showed up, only to tell people to "check your email". Many complained of no email from KLM. I did have one, rescheduling us for the next day! I was directed to visit the transfer desk, which after a while, succeeded in putting us on a half-empty flight leaving a couple of hours later. In the end, we arrived in Bologna still (but barely) in time for the tour get-together.

The tour we were on was Overseas Adventure Travel's (OAT, everyone calls it "oat") "Tuscany and Umbria". OAT is a division of Grand Circle Travel, and while we had toured with Grand Circle before (Italy in 2018 and England/Scotland/Wales in 2019), this was our first OAT tour. OAT tours are smaller groups - only 13 on this one.

We had booked the pre-trip extension which added six days in Bologna and Parma, before joining the main tour in Lucca. Only one other couple was on the pre-trip, which made it more like a private tour. As we had been to Rome before, we skipped the post-trip extension.

This travelogue includes selected pictures from the trip. Click on any of them to view on Flickr (more sizes and location information.) Many more photos can be found in my Italy 2022 Flickr collection. There's also a Cats of Italy 2022 album!

In the morning we did a walking tour with our tour leader, Daniela, who had along as a trainee, Paola. Over the next few days, I would see Paola frequently jotting down notes and photographing explanatory placques we would see. We started at an Osteria where Marcella demonstrated making tortellini and tortelloni from scratch. 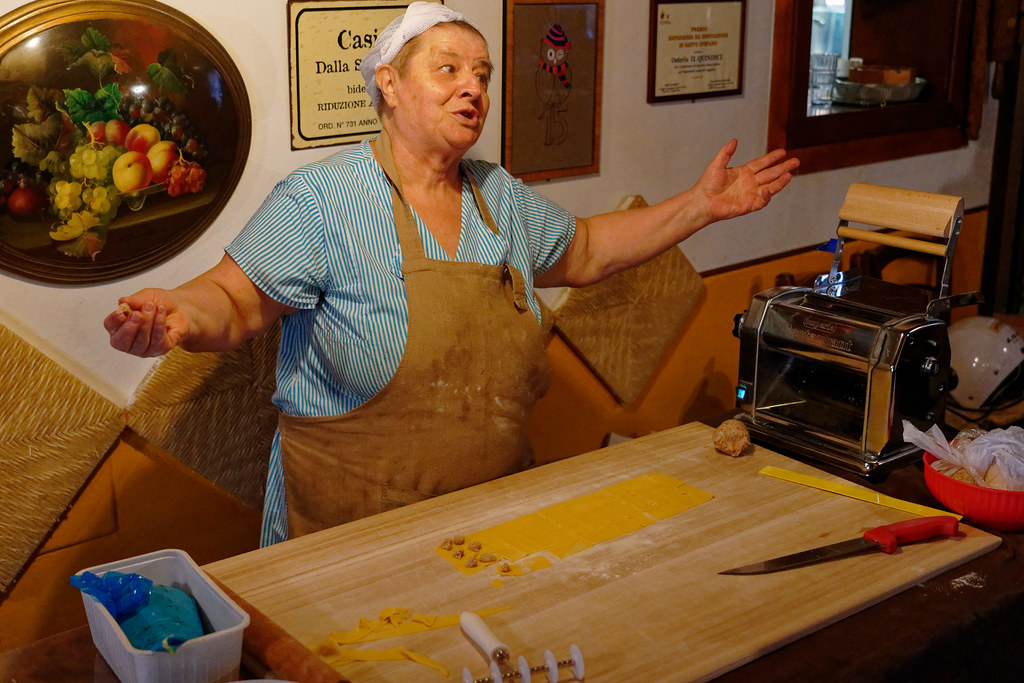 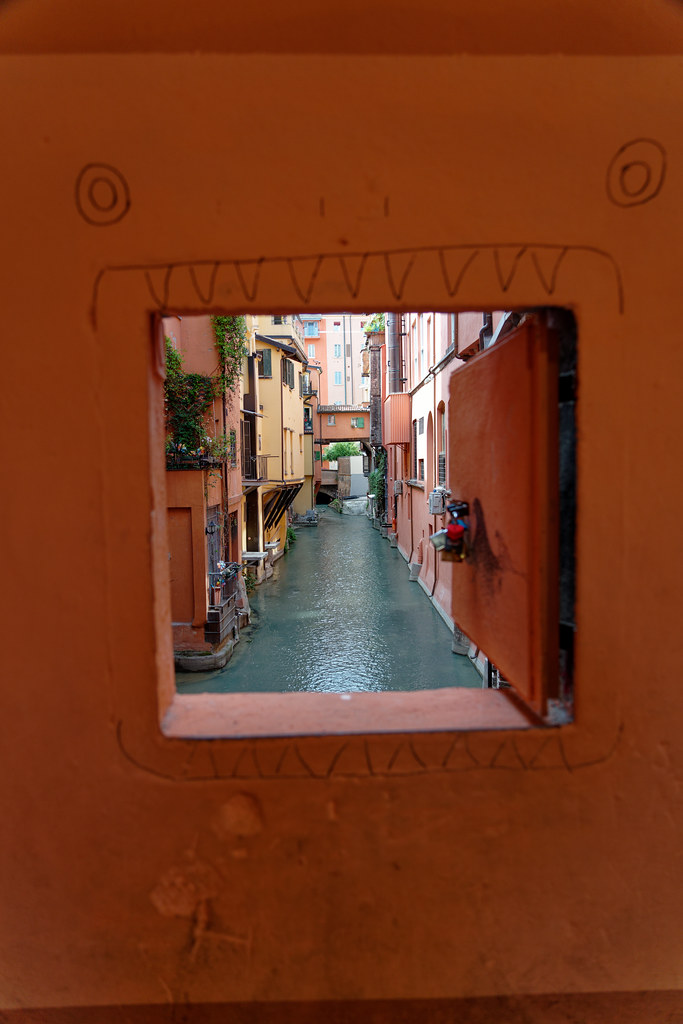 We were then shown the main square with a statue of Pope Pius IV as Neptune, with a trident, surrounded by mermaids. The statue had Pius nude, as was the style, but we were told that Pius (or his advisors) didn't like the idea of the representation having a proportional "package", so the sculptor minimized it against his wishes but he had the last word. The statue has Pius with his hand outstretched, and if you view it from a particular angle behind, the thumb reconstructs the sculptors vision of the pope's "Member". 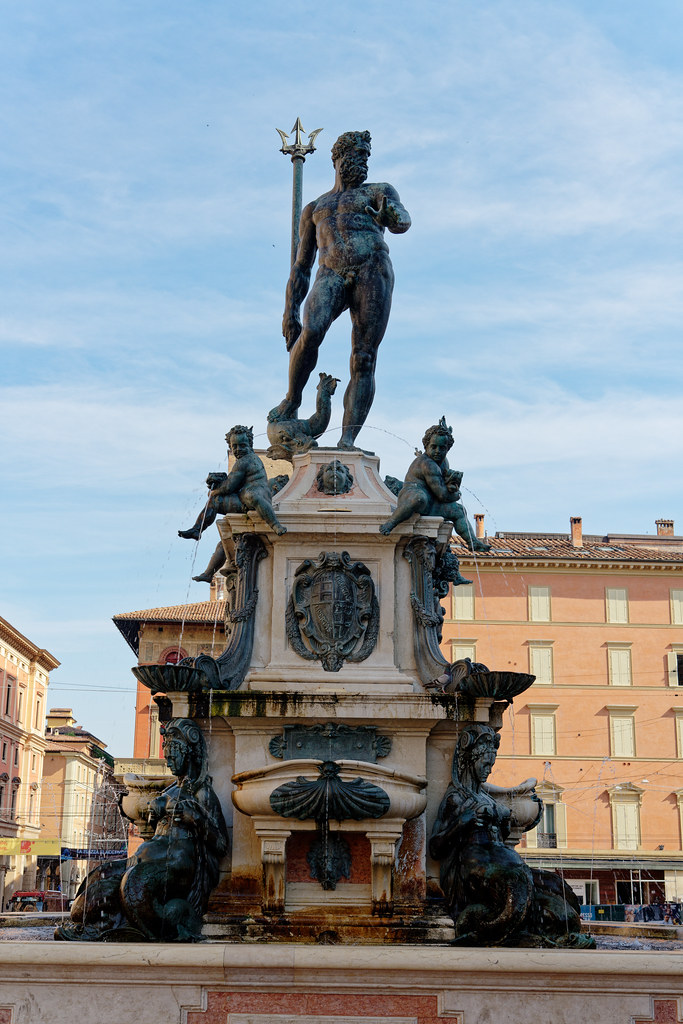 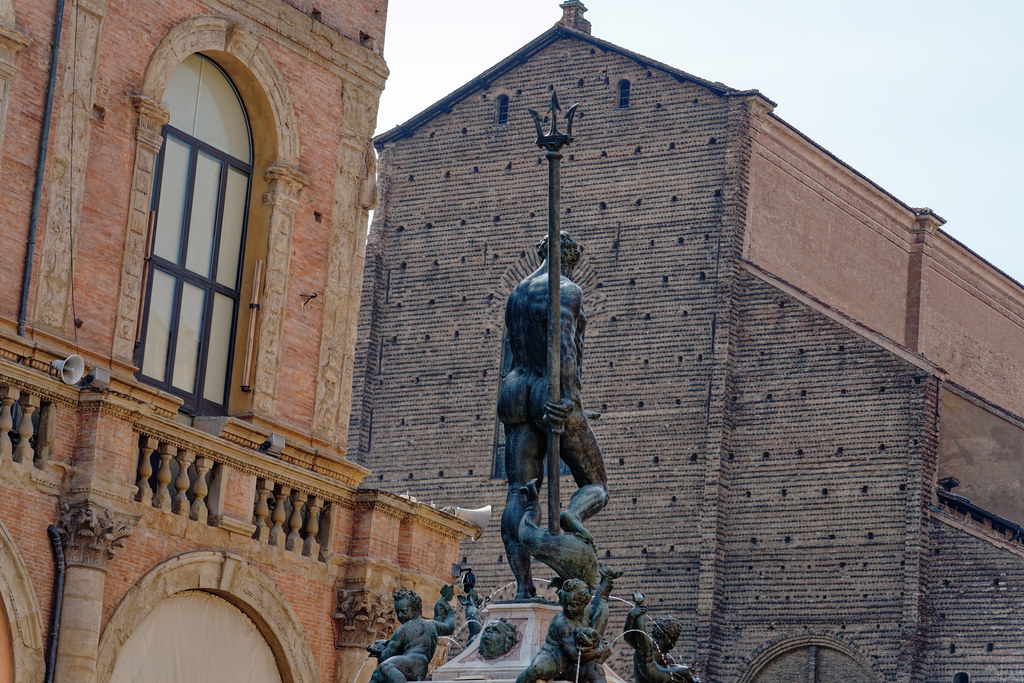 We visited one of the buildings used by the University of Bologna, including a large library with walls adorned with family crests of students who had attended over the centuries. Oddly, some of these displays had hats on them, and Daniela didn't know why. Another room we visited was the "Anatomical Theatre" where dissections had been done to teach students anatomy. We were told that, initially, only women were so dissected as they "didn't have souls." Later, male prisoners and servants were dissected in the name of science. 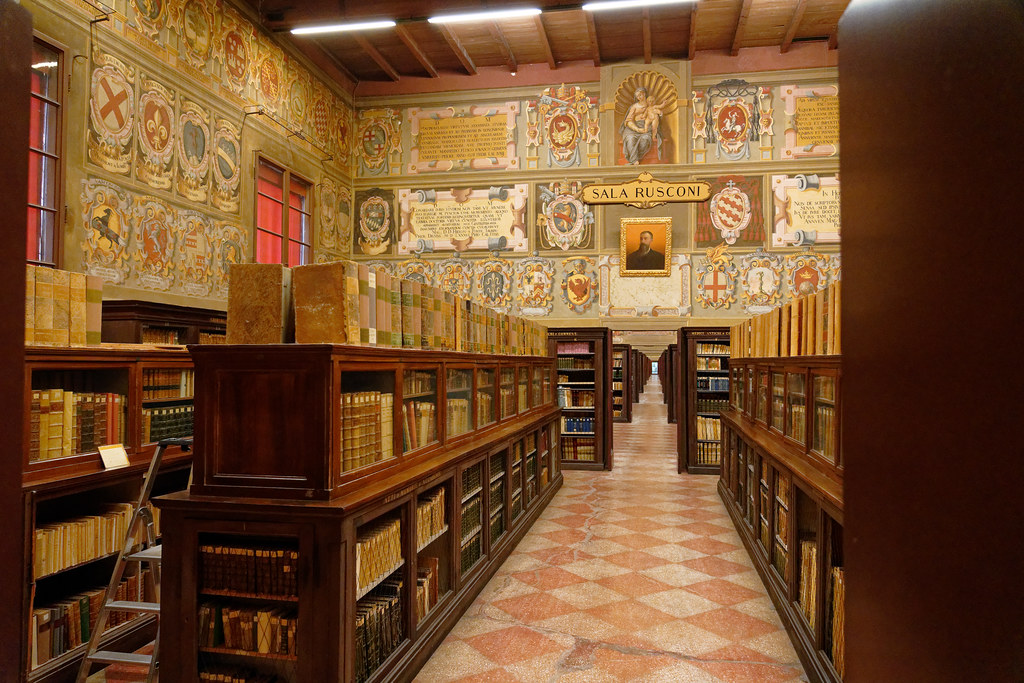 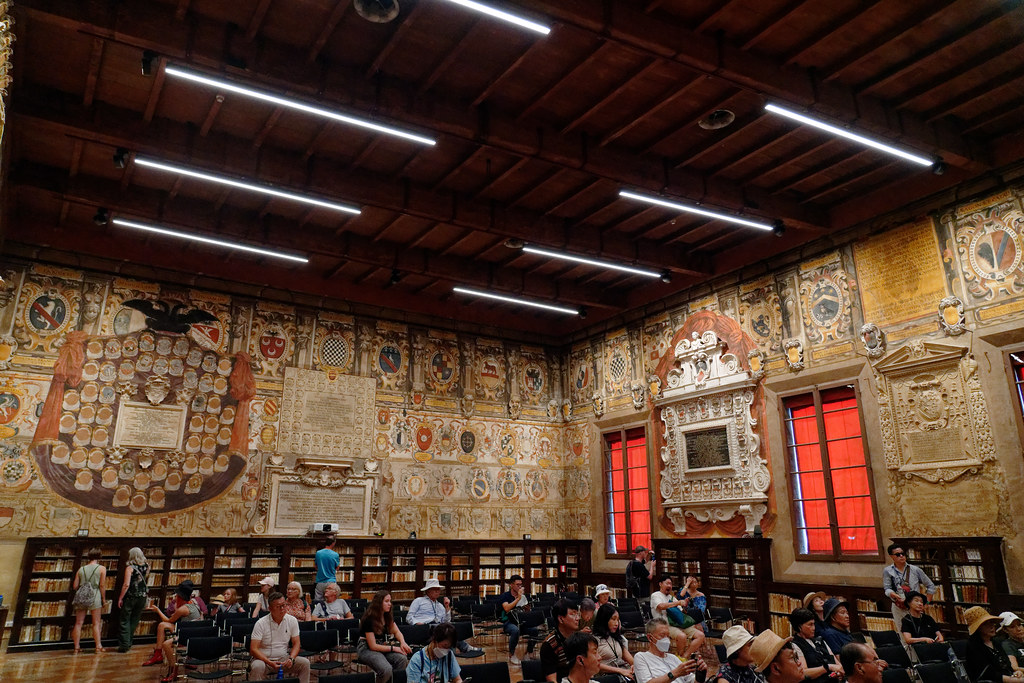 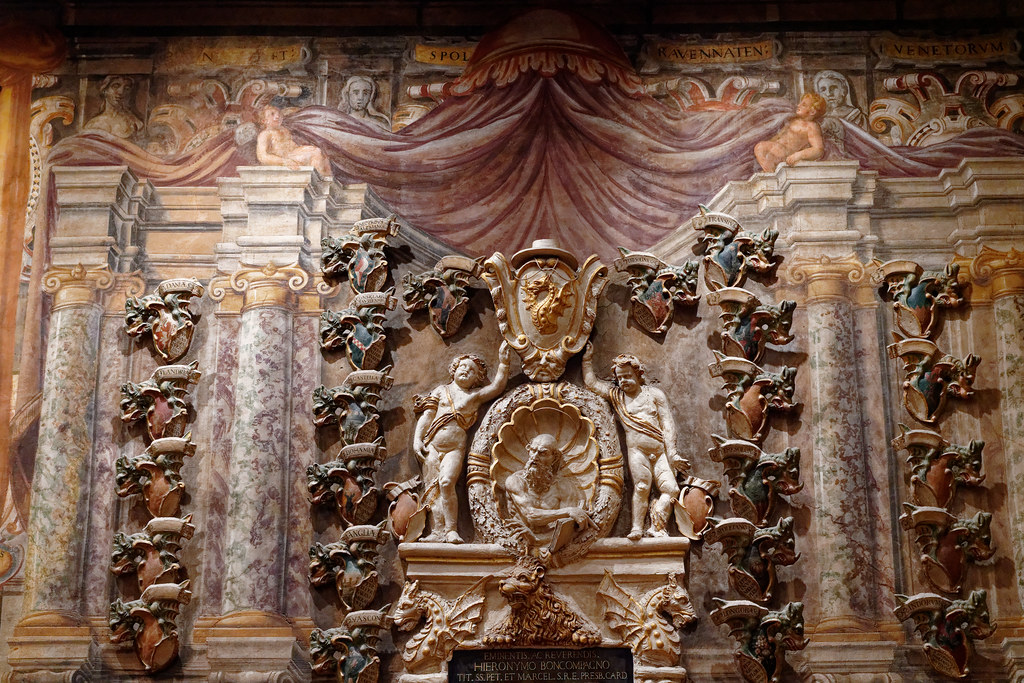 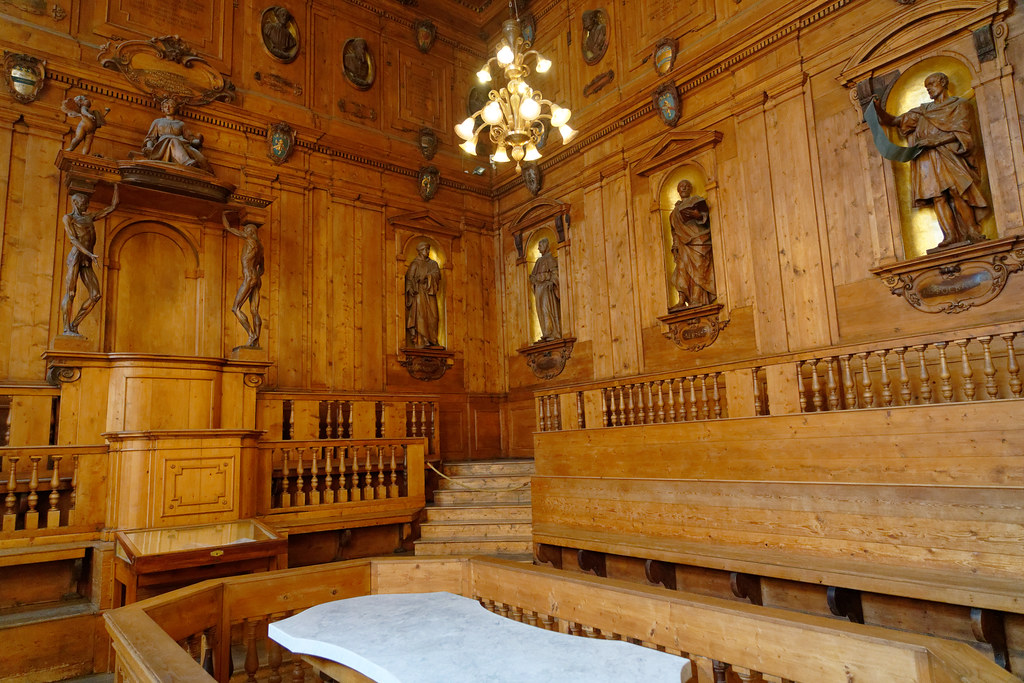 At one point we were led through a covered passage that contained an interesting intersection. The walls and ceiling were designed so that if you faced one corner and spoke, someone standing in the opposite corner could hear you. (I've seen this effect demonstrated in various museums.) We were told that one use of this was for priests to give confession to lepers without risking their health. Leslie and I tried it, and it does work, but it depends on the speaker and listener being at about the same height. 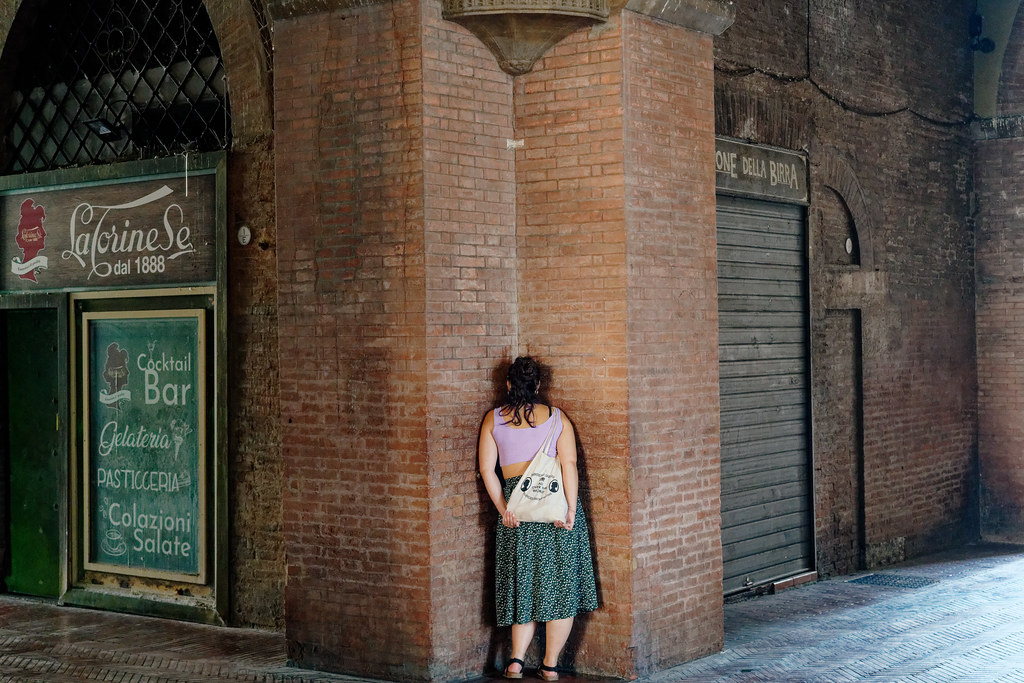 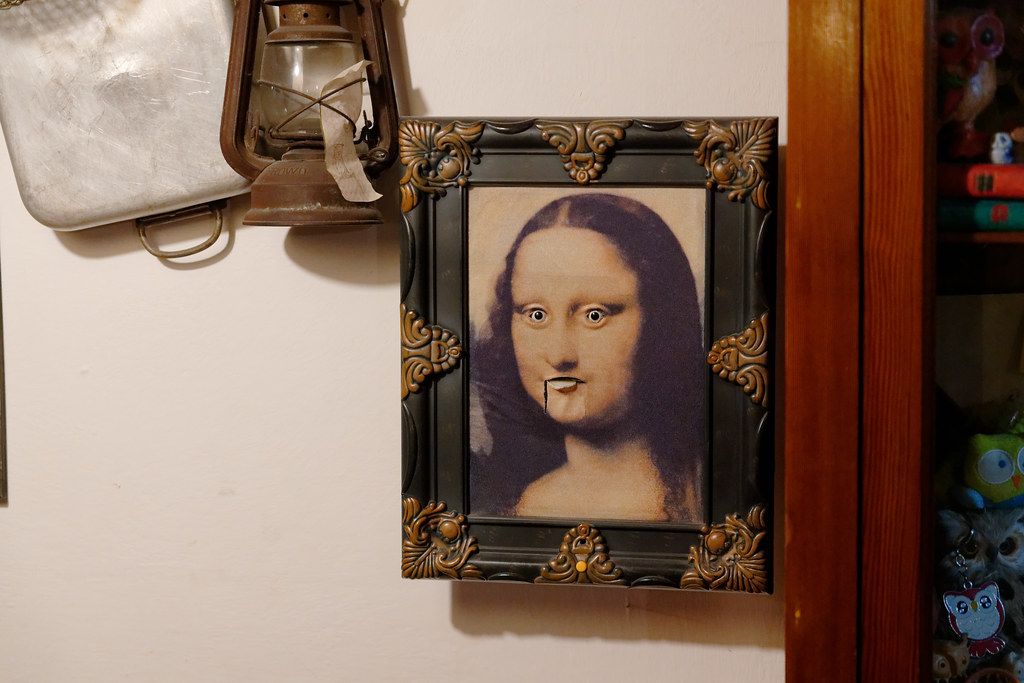 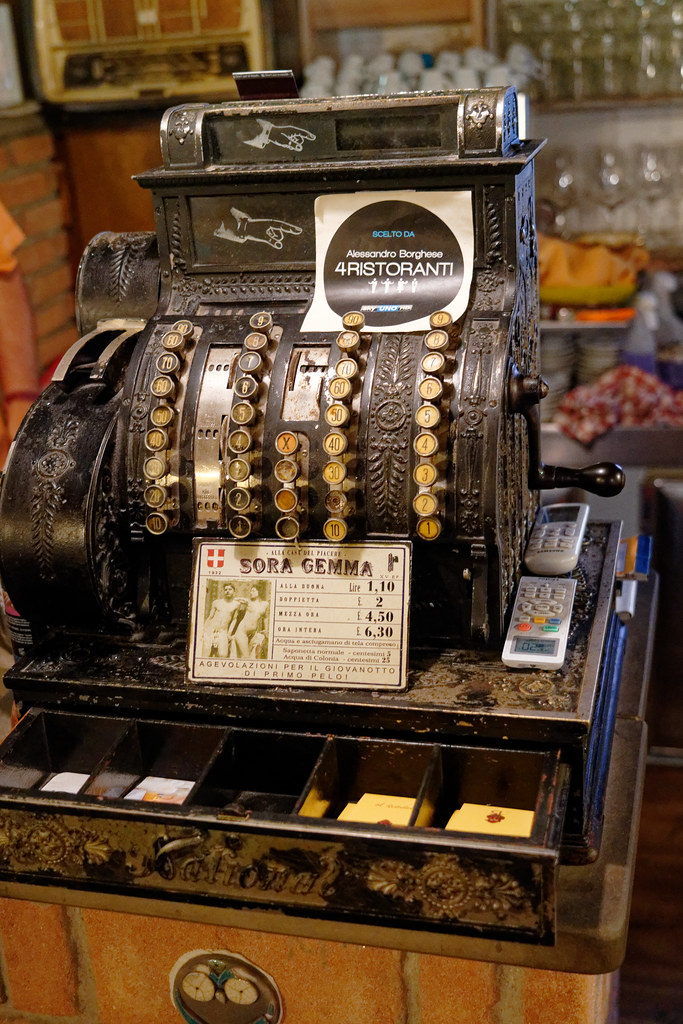 Bologna once had 120 towers, and several remain standing. Two that are next to each other lean, one of them somewhat precariously. Others are known to have bricks occasionally fall off. All of us had lunch at a restaurant famous for a dish they labeled "Not Spaghetti Bolognese", as that isn't a Bolognese dish! They even sold t-shirts with that printed on them. 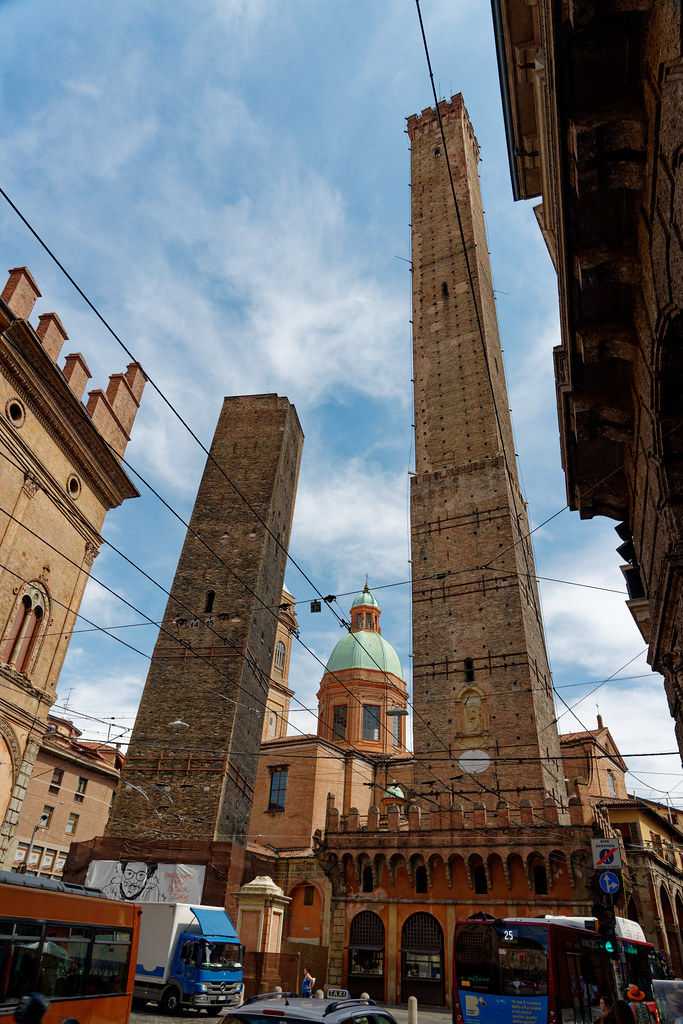 In the evening we returned to the Osteria where we had a group dinner. I had Tortelloni with walnuts and "speck", a type of ham, as my selection, but all of us shared appetizers of various charcuterie as well as hot bread disks that one splits and spreads with a lard/garlic/rosemary paste until it melts, then top with Parmesan. It was delicious. 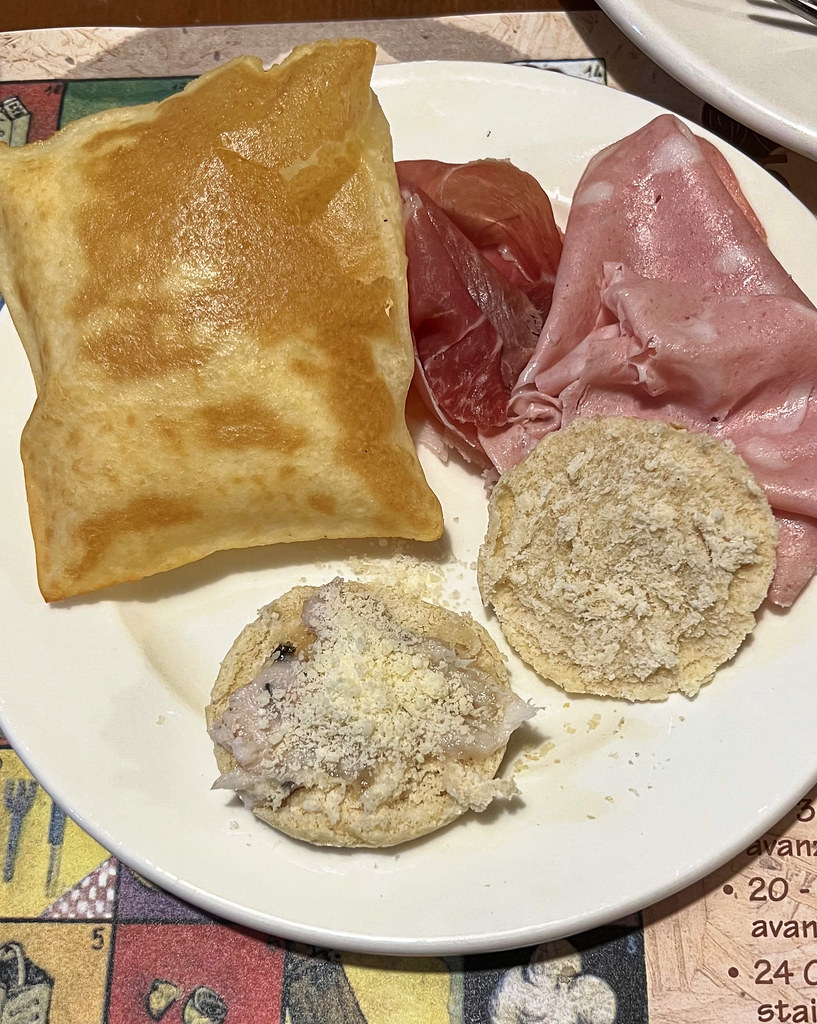 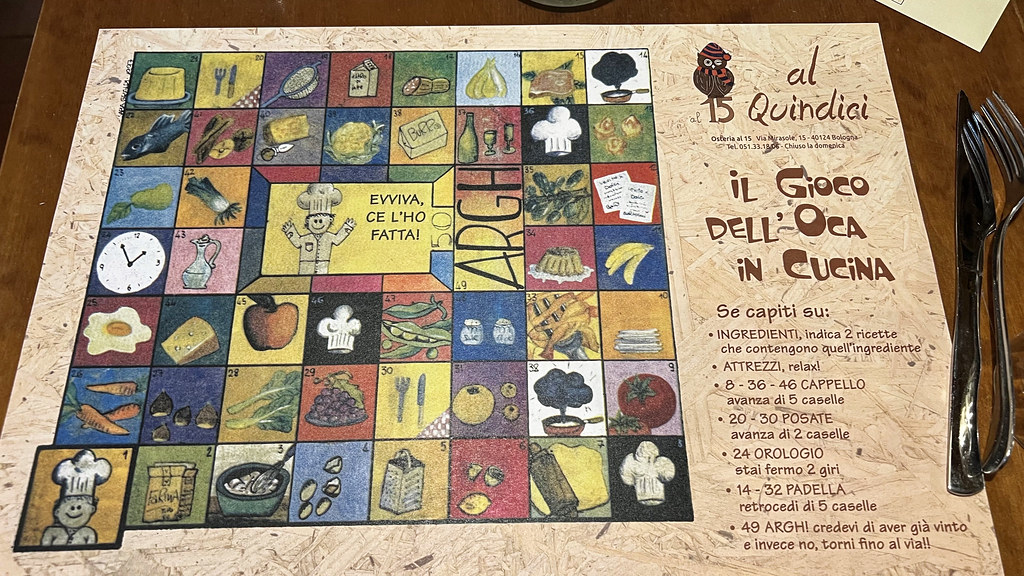 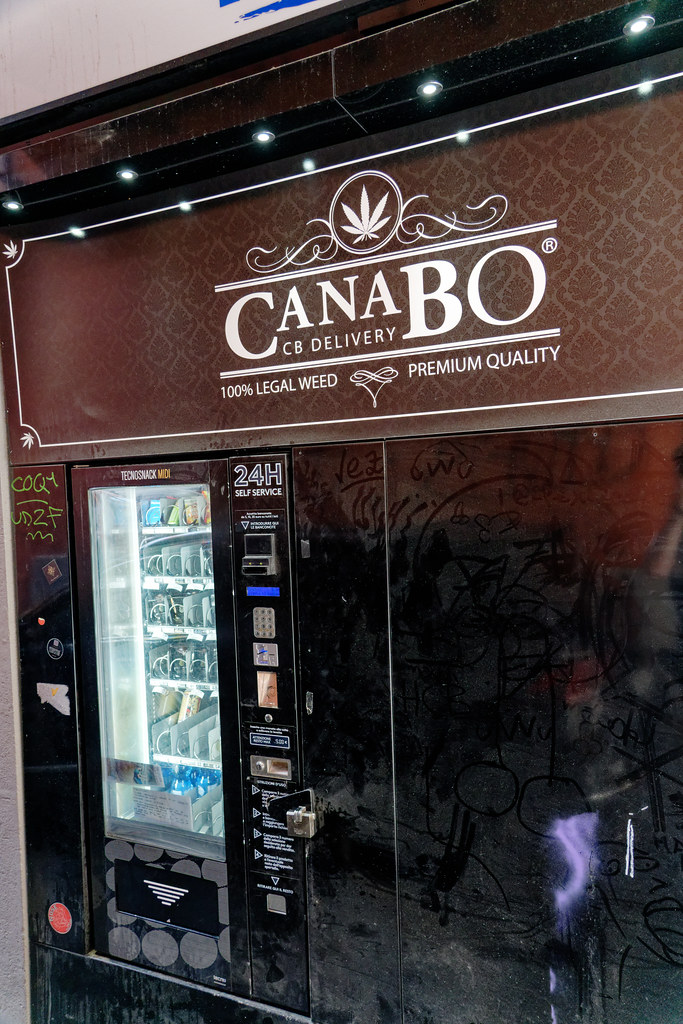 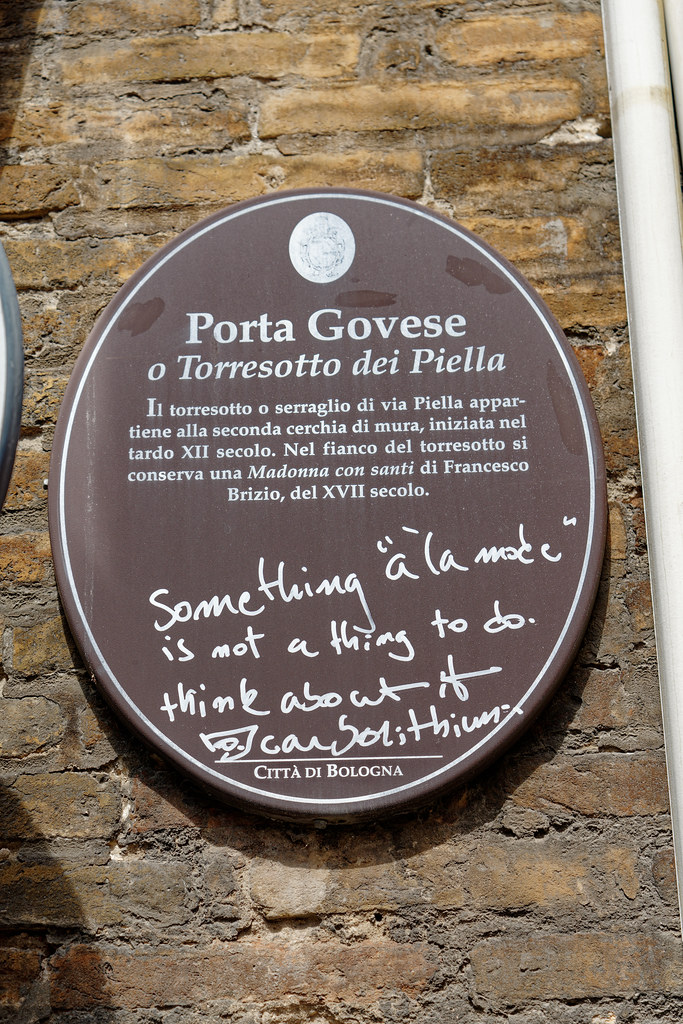