For several years, Leslie and I had planned to celebrate our 30th wedding anniversary with a splurge to Uniworld's Ultimate France tour, a series of three 7-day river cruises in France. We blew to suites across all three legs and booked it - for 2021. Surely the COVID pandemic would be over by then, right? Right? Okay, how about 2022, same bat-time, same bat-channel? We're on! Even better, our travel friends Bud and Gingy, whom we met in 2009 on a Japan vacation, agreed to join us and help us celebrate.

(This travelogue includes selected pictures from the trip. Click on any of them to view on Flickr (more sizes and location information.) All my photos can be found in my French Rivers 2022 Flickr collection.)

We began by flying Air France from Boston to Paris, and then to Bordeaux, where our first leg started. Wait - weren't we in Bordeaux just two months earlier? Yes, indeed, but this would be a very different journey.

Here's a shot I took shortly after our flight departed. 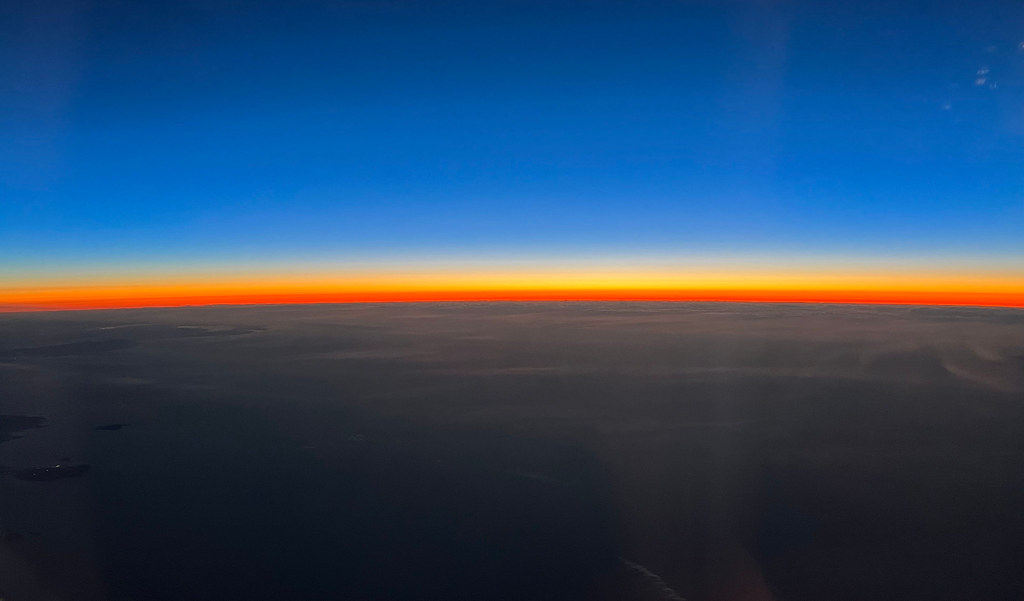 This leg is what Uniworld calls "Brilliant Bordeaux". The ship boards in Bordeaux, immediately sailing north on the Garonne river, goes up and down the Garonne and Dordogne rivers several times, eventually returning to Bordeaux.

We boarded the S.S. Bon Voyage, which was an updated and renamed River Royale, on which we took our first Uniworld cruise through Burgundy and Provence back in 2012 (also with Bud and Gingy, and their daughter Amanda.) It still had Uniworld's typical elegant style that is sometimes over-the-top, but was quite nice. 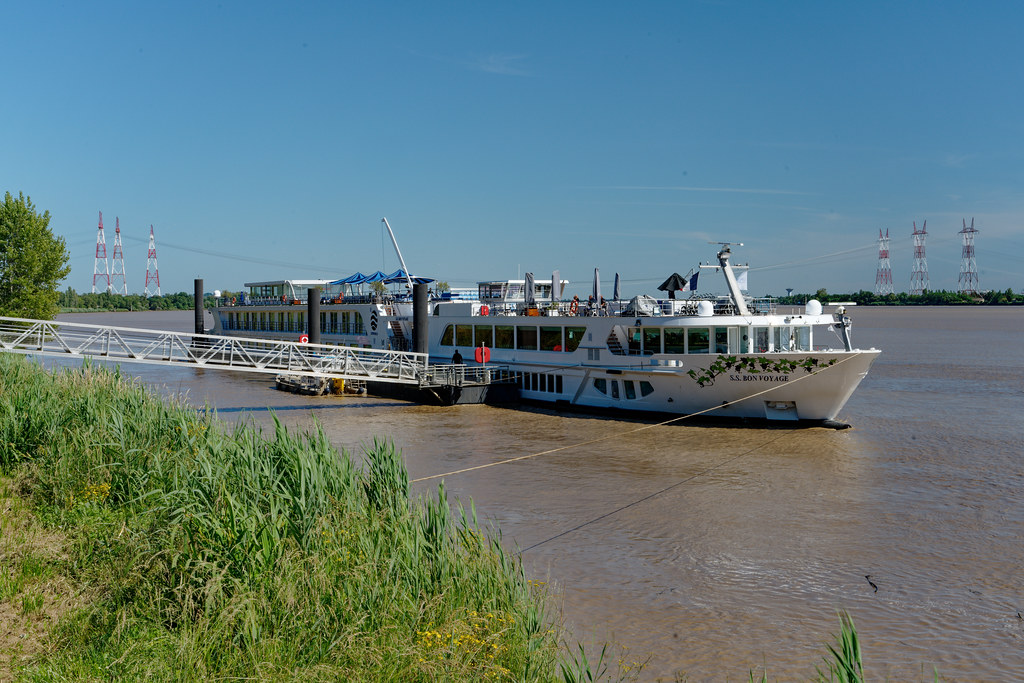 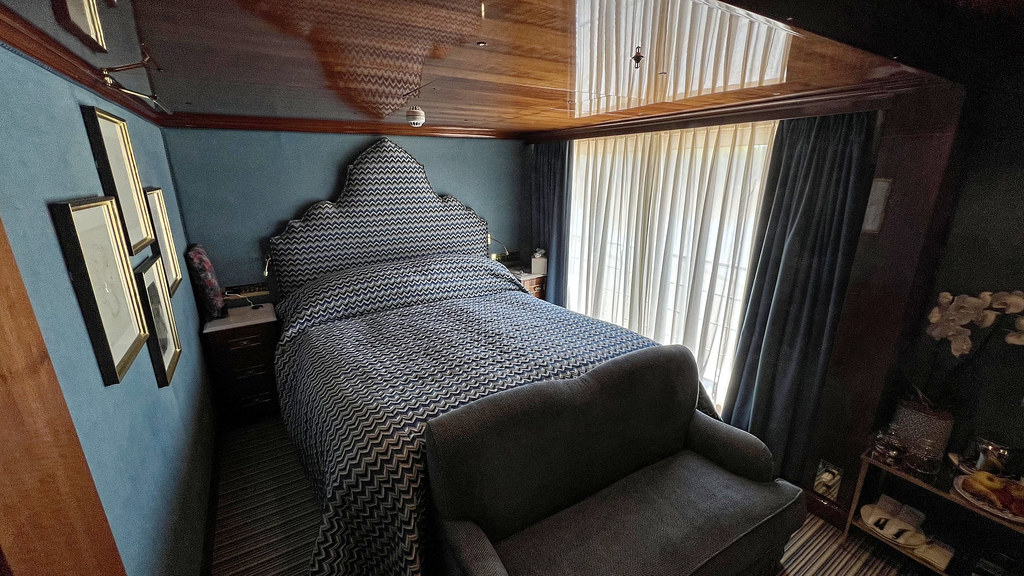 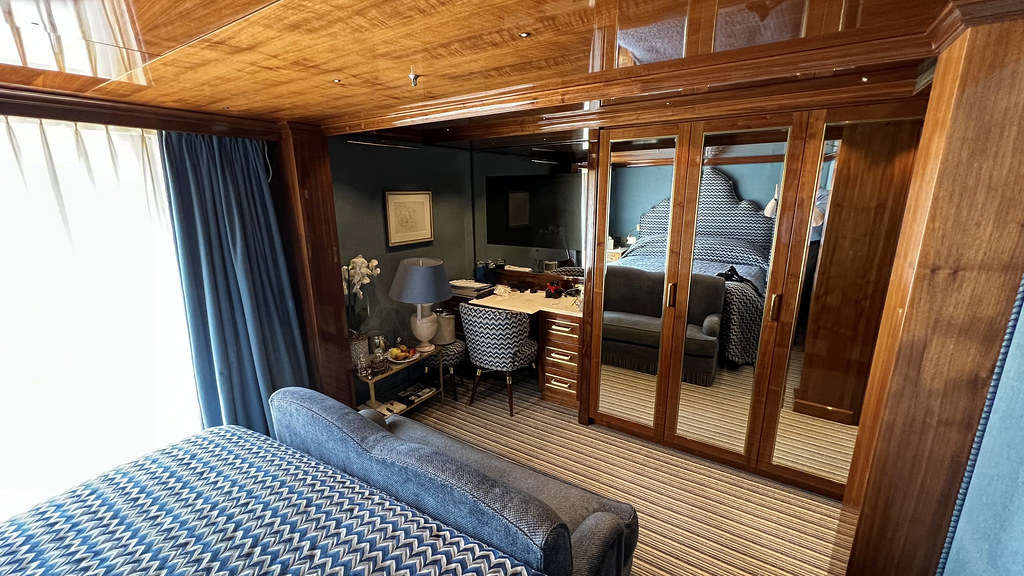 At 5PM, after everyone was on board, we set sail for our first stop.

The morning's activity was a wine tasting featuring Etalon Rouge (red stallion) wines, made there in Blaye by putting uncrushed grapes in barrels that are rotated daily to agitate and "naturally crush". We had a "vertical" tasting of 2013, 2015 and 2018 vintages, all 100% Cabernet Franc (which is unusual here.) I preferred the softer taste of the 2013, Leslie liked the more tannic 2015 better (consistent with our tastes elsewhere.) The proprietor was also named Leslie - in this case, a man named Leslie (Les) Kellen, who came from South Africa and bought the winery, a B&B, and an art gallery. 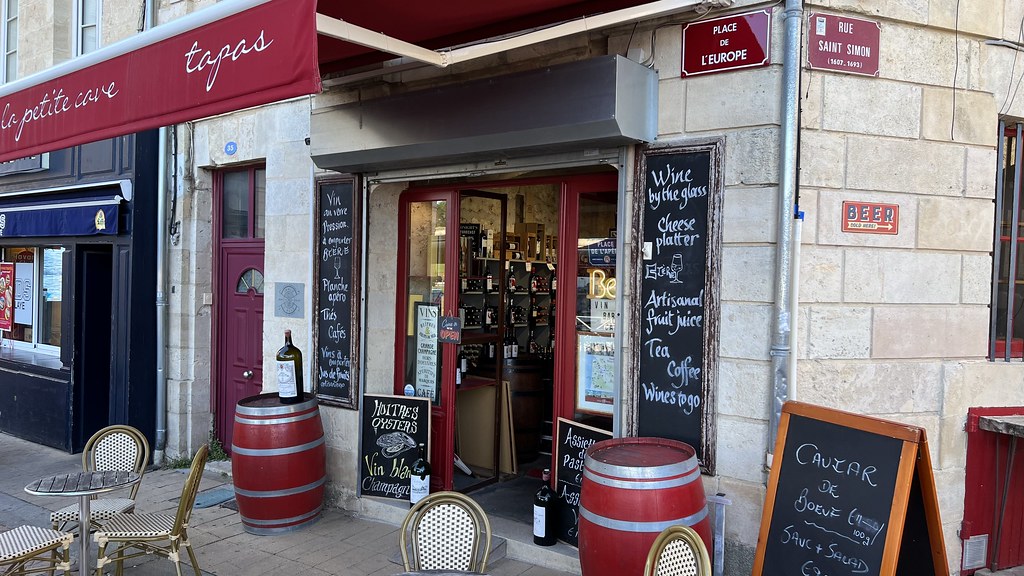 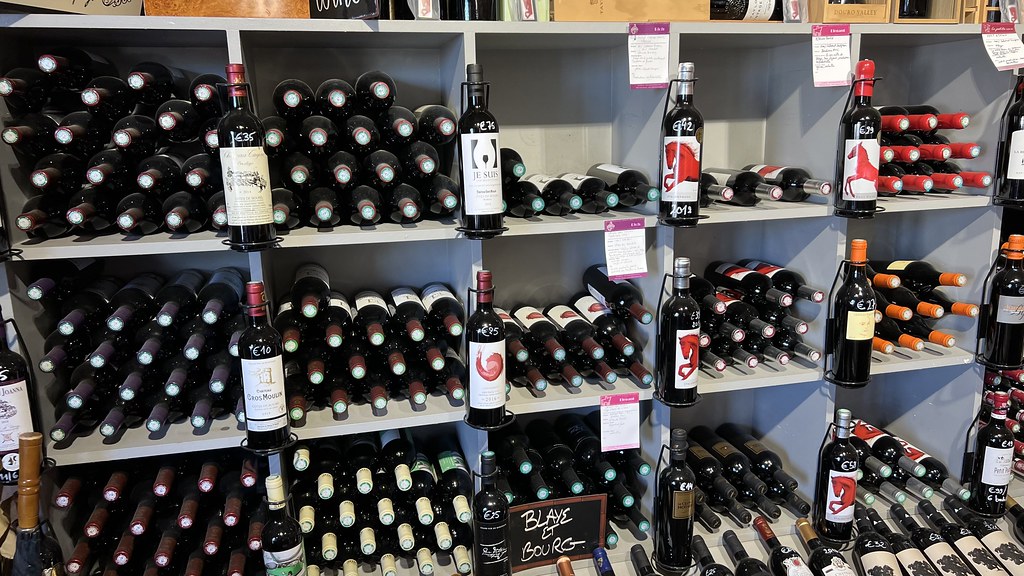 At one point during our tour of the cellars, where some very expensive wines were stored, we were told the story about how Kellen discovered a wine he thought was truly wonderful, called Je Suis (I Am). The vintage was only 1500 bottles and he bought all that was left (750). The winemaker later had another vintage and Kellen bought all 1500 bottles. The story is that he was going to keep it all for himself, but his guests (largely American) wanted to buy some and have it shipped home, so there wasn't a lot left. We did sample it, and it was indeed delightful, so yes, we bought into the story and had six bottles shipped to us, along with six of the Etalon Rouge (both red and white, which is confusingly named Blanc de Etalon Rouge). Given that the shop had bottles of Je Suis on display for sale, I'm reasonably sure we were fed a line in order to generate sales, but it worked. (The wine arrived about a week after our return, nicely packed.) 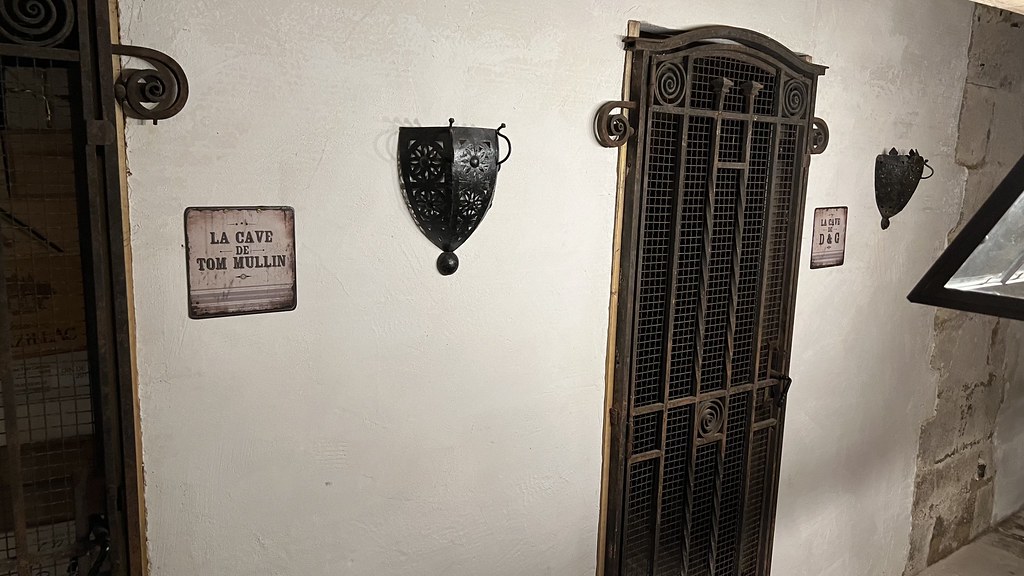 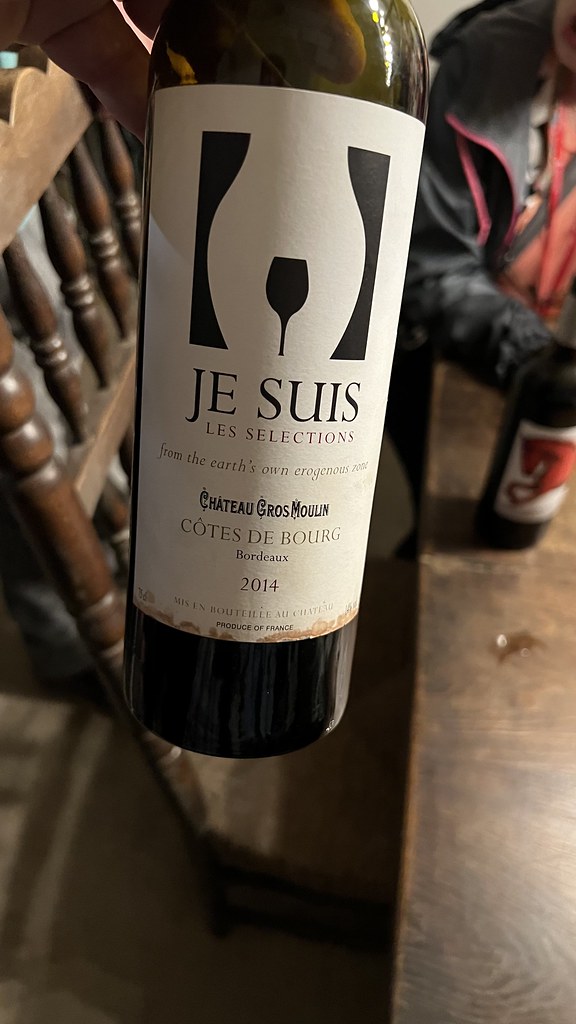 A small branch of the river runs into Blaye and the tide was said to be 4-1/2 meters. When we got there, the level was low and boats were not floating. On our way out, the water had receded completely so you could see the bottom. 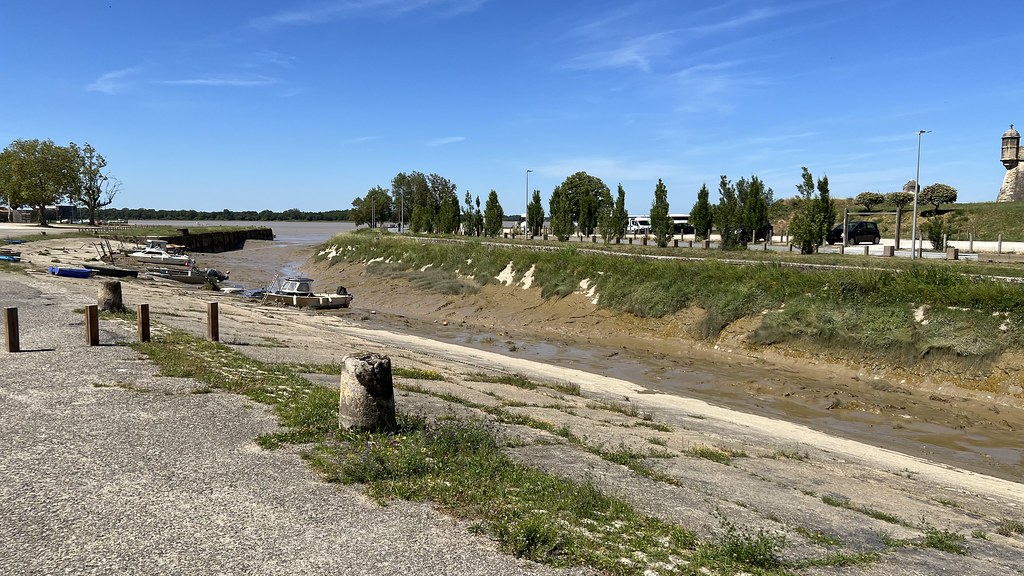 We then sailed on to Bourg (pronounced "boorh"). We were first shown a Roman laundromat. 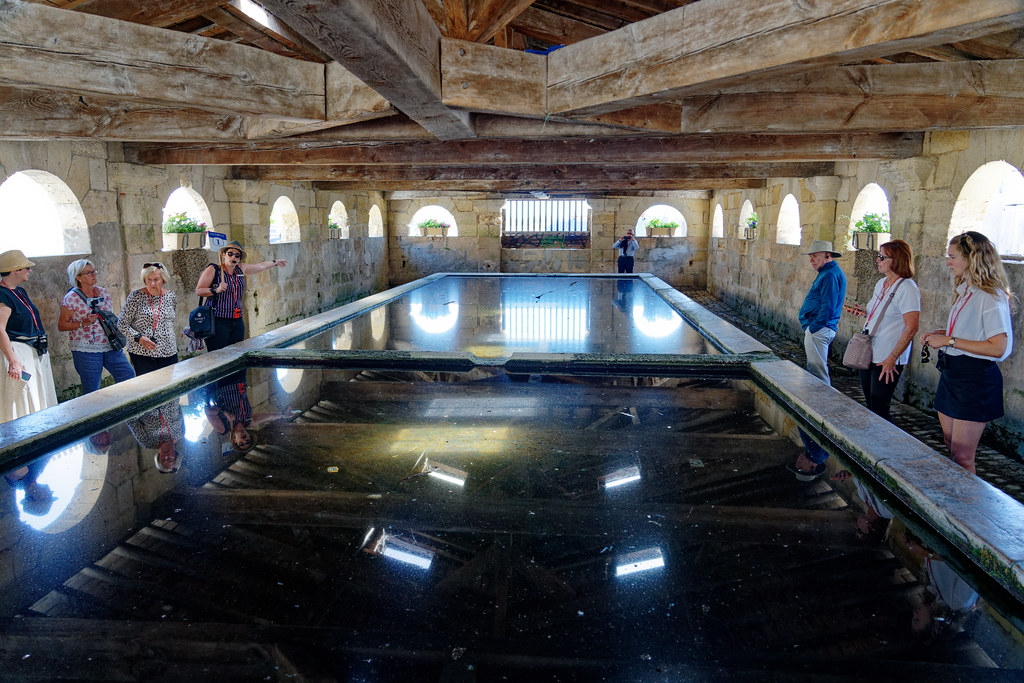 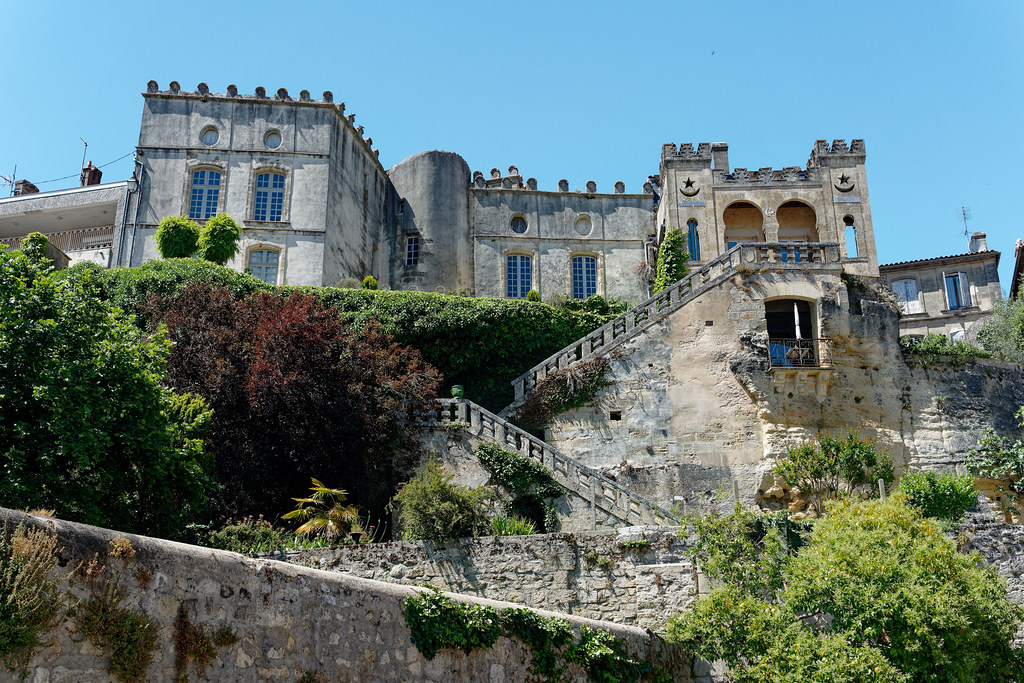 One of the hundreds of warships Germany scuttled in the river at the end of WWII. 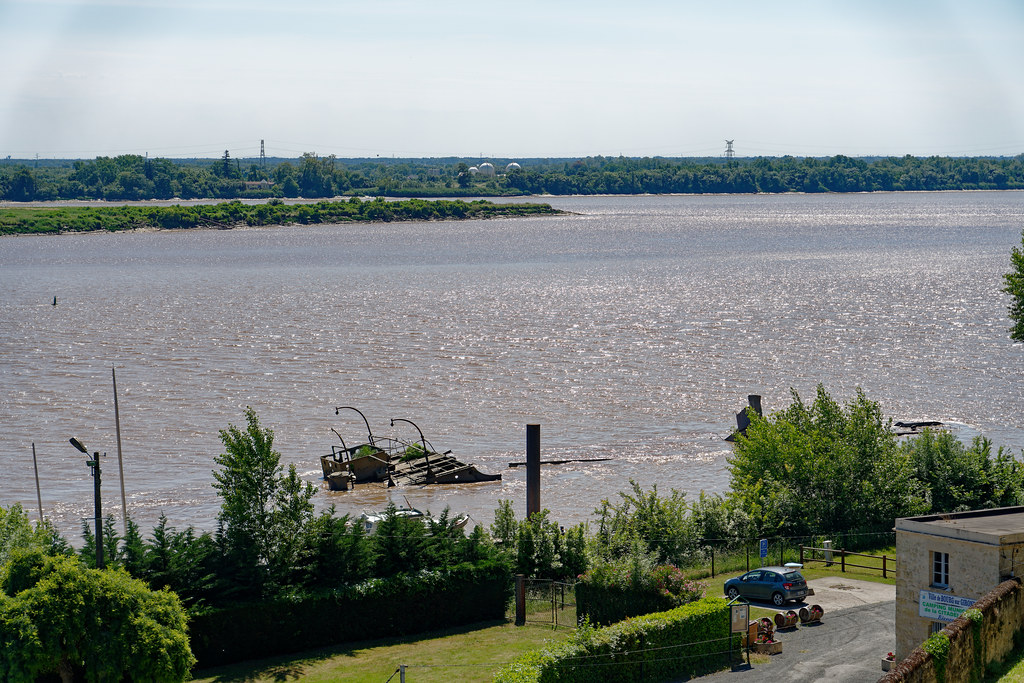 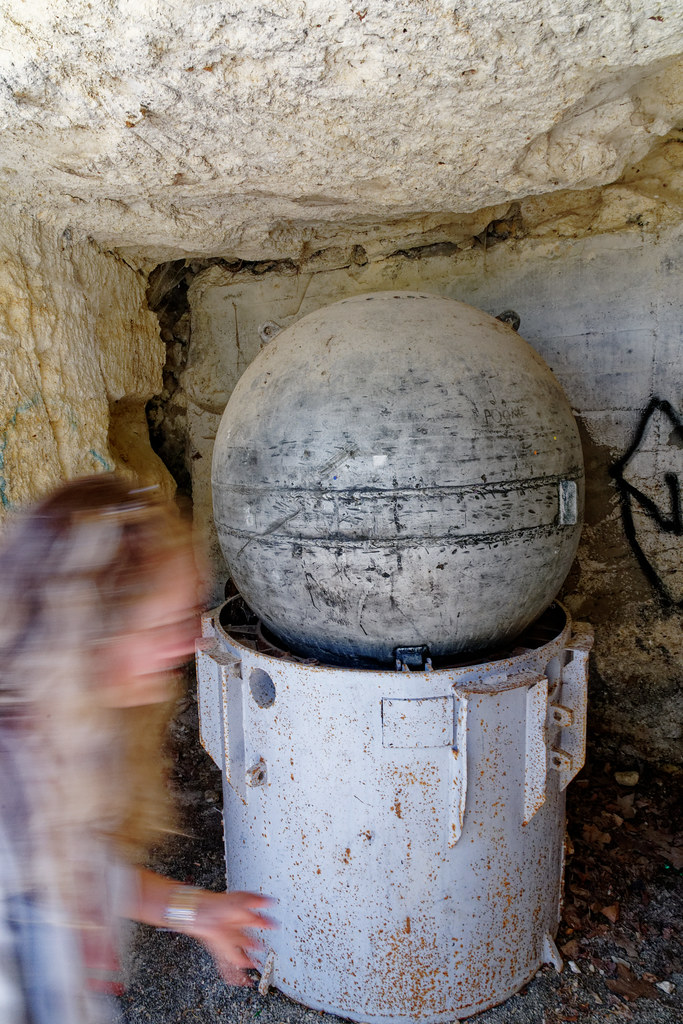